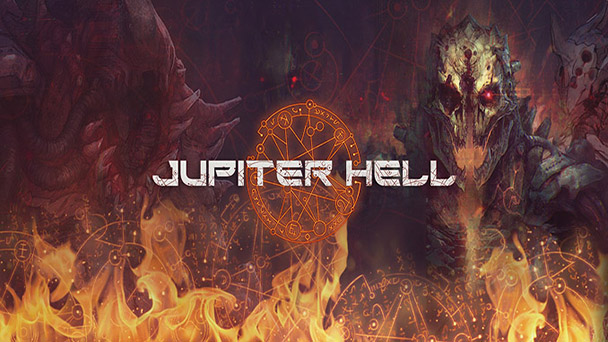 DoomRL demonstrated that Doom could be turned into a rewarding turn-based tactical game. But when the lawyers started sending cease-and-desist warnings, the developers moved the action to another planet. Jupiter Hell retains the look and spirit of its predecessor, with skulking, shooting, and character cultivation that’s as absorbing as ever. 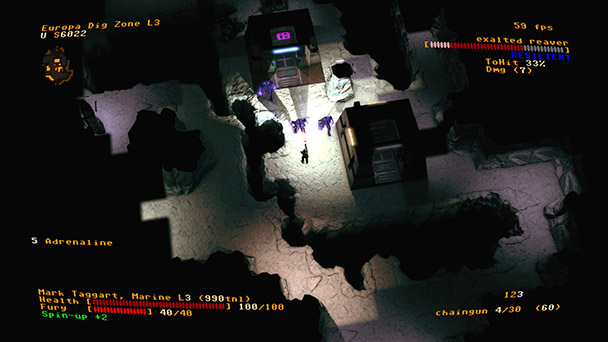 Over the past few years, the number of remaster and remakes and ramped up within the industry. The trend allows players to revisit titles, often enjoying improved visuals, the integration of downloadable content, as well as quality-of-life improvements. But essentially, the movement revolves around publishers delivering the same core experience.

But a far more interesting approach sporadically arrives from independent developers with a passion for experimentation. In 2002, Poland-based ChaosForce reimagined Doom as a turn-based, roguelike. DoomRL generated new nuances, converting the tense test of reflexes into an absorbing assessment of tactics. Entering a room filled with enraged demons was still rousing, but this time exterminating the horde exercised your cerebral abilities. Best of all it was offered for free. 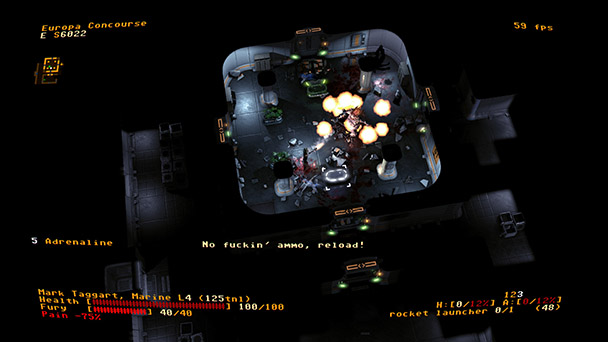 Leaving the Red Planet Behind

But eventually ZeniMax Media, owner of the Doom property, forced ChaosForce to change the game’s name to DRL. Additionally, the litigation prompted a shift to an open-source format, extinguishing any hopes that ChaosForce might have had of recouping the costs of fourteen years of ongoing development. Instead, the diminutive studio created Jupiter Hell, a new title which sidestepped legal ensnarements by removing all direct references from Id Software’s celebrated franchise.

Fortunately, the adaption of a lone space marine prowling through adversity-filled hallways hasn’t changed. Jupiter Hell remains a distinct roguelike, paring the experience of exploring procedurally generated environments to its core essentials. Sure, you won’t find a multitude of outlandish weapons and items to experiment with. But this change results in streamlined play. 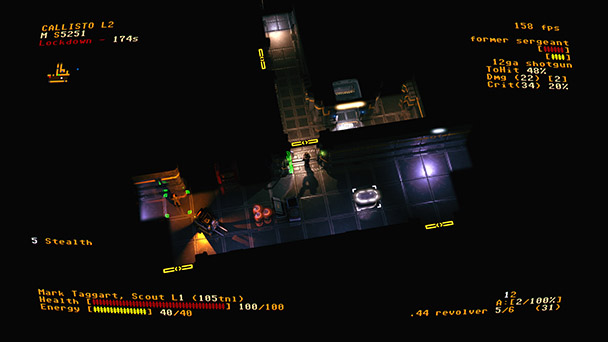 Three Classes and Everything from Katana to Plasma Launchers

Runs begin with the selection from three different character classes that have their own unique resource. Marines begin the game with a small health pack and are especially resilient, with the ability to stack additional health and even recoup a bit when they enter a new level. Their resource is fury, which gradually regenerates with every enemy kill. This can be converted to adrenaline, providing healing and temporary immunity.

Scouts are Jupiter Hell’s stealth class, with energy are their class resource. Beyond the ability to foresee the location of level elevators, they can momentarily go invisible, giving the opportunity for a guaranteed critical on an unsuspecting enemy. Then there’s the technician, who excels at equipment use and employ power as their resource. Able to deploy devices quickly, trigger smoke screens, repair armor and headgear, as well as hack robotic enemies, they begin with the game with three multitools. 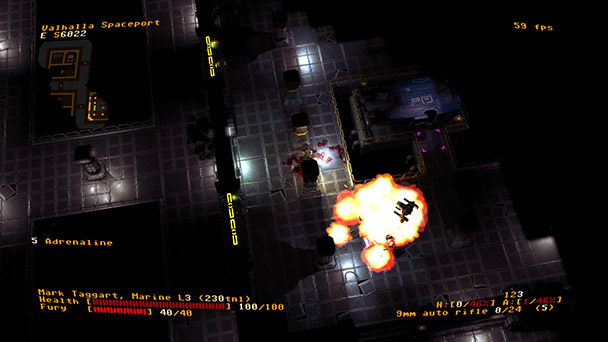 As your character perseveres, you’ll earn points that can be spent to purchase traits. Although there’s some general overlap, the majority of these skills are associated to a specific class, encouraging some distinctive approaches to play. As a technician, I was able to hack into robots that I had a line of sight with, instantly swap weapons, and was able to make my smoke screens injurious to enemies.

But despite these intricacies, Jupiter Hell keeps things accessible and lively. Much of that is rooted in the game’s approach, where every action, from moving, shooting, to reloading takes up a single turn. While the pace can be quick, the turn-based approach gives you as much time as you want to deliberate on your actions. Typically, your character’s simulated hearing lets you perceive enemy positions and with a straightforward cover system, characters can take cover behind corners before going full auto and revealing their positions. It’s a reoccurring set-up but it’s perpetually rewarding. 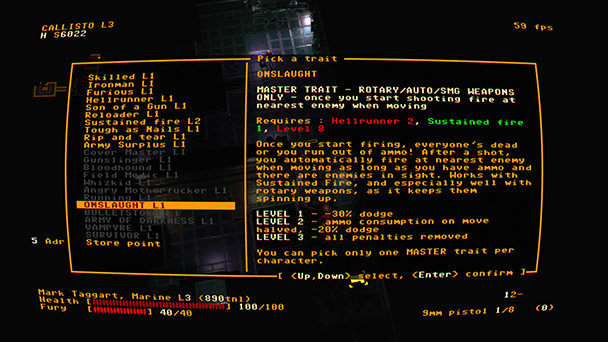 Mixing up the Munitions

Pleasingly, the game provides you with a capable toolset to handle the action. Beyond machine guns with massive magazines (sidestepping the issue of being prone during a reload), there’s shotguns that can decimate clusters of adversaries, pistols than balance long and short-range targeting, and even melee weapons. All but the latter operate on a specific type of ammunition and Jupiter Hell prods players into switching up their arsenal by varying the kinds of bullet drops.

Play on the game’s easy setting, and Jupiter Hell becomes one of the more approachable roguelike around. Early stages scatter foes loosely, allowing you to generate a capable character build before tossing you into the wolf’s den. Later, the game modifies its stats ever so stealthy, often pitting you against stronger, more numerous opponents and few ammo dumps. Ratchet up the difficulty and Jupiter Hell becomes a chess-like game where one wrong decision can lead to your downfall. While the game’s user interface makes some unconventional choices, you’ll quickly adapt to the game’s quirks. 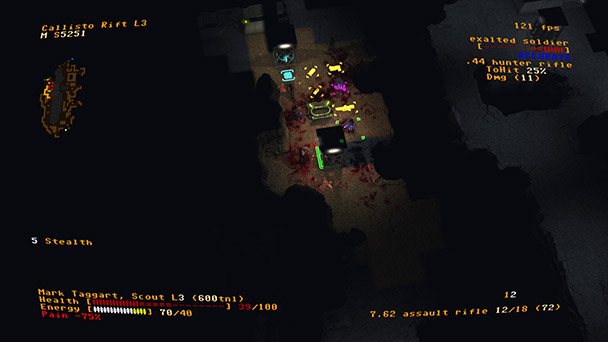 Jupiter Hell’s interfacing and menuing toy with the look of a vintage CRT-based game, curving text to emulate the effect of playing on a convex television screen. However, when it comes to rendering the action, the game is far removed from the ASCII-art used by Rogue. Environments recall the shadowy hallways of Alien and hostile wastelands that are common in science-fiction. While there’s not a lot of animation beyond the showy explosions, there are some attractive lighting effects. Best of all, Jupiter Hell is delightfully modest when it comes to specs.

Far more inviting than most roguelikes, Jupiter Hells boils the sub-genre down to the essentials. The result is a persistently thrilling turn-based game that captures the fundamentals and fights of Doom but feels remarkably different.

Jupiter Hell review
DoomRL demonstrated that Doom could be turned into a rewarding turn-based tactical game. But when the lawyers started sending cease-and-desist warnings, the developers moved the action to another planet. Jupiter Hell retains the look and spirit of its predecessor, with skulking, shooting, and character cultivation that&rsquo;s as absorbing as ever. Over the past few years, the number of remaster and remakes and ramped up within the industry. The trend allows players to revisit titles,&hellip;

Summary : Covering the ground with crimson-colored demon blood is both easy to pick up and enjoyable in Jupiter Hell. Likely, you’ll wonder what other action franchises might work just as well with a turn-based approach.