JackQuest: The Tale of The Sword review 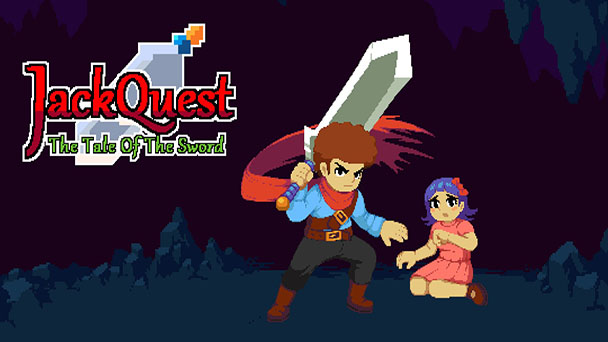 There’s little of JackQuest: The Tale of The Sword that doesn’t feel overtly familiar. The game opens with a cinematic that recalls the succinct set-up of titles like Super Mario Bros., Donkey Kong, and Ghosts ‘n Goblins. The game’s eponymous protagonist is about to acknowledge his love for Nara, when a giant green orc emerges and kidnaps the maiden. As with almost any ‘damsel in distress’ development, the lead leaps into action, traveling down through a labyrinthine underworld to rescue his love.

Sure, it’s a cliched impetus, but if JackQuest’s action either challenged convention or was thoroughly polished, the title might be a worthwhile experience. Woefully, play feels like a patchwork of superior Metroidvanias, resulting in a disappointingly short, unbalanced, and unsatisfying experience. Regretfully, when the game does strive for distinction, it’s design decisions often undermine any enjoyment. 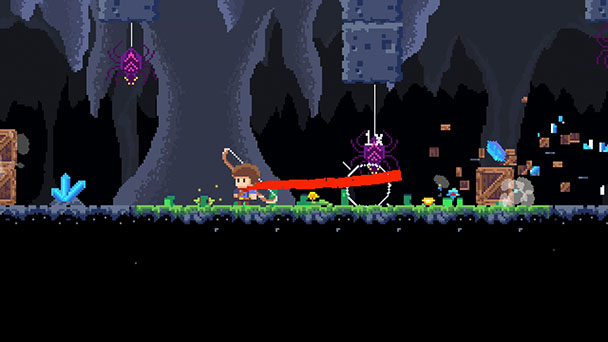 A Sentient Sword Who States the Evident

Certainly, the first few moments of The Tale of The Sword display flashes of potential. Early on Jack picks up a massive broadsword named Kuro, which is alive with the soul of a man trapped by the game’s villain. As the interplay between Kill la Kill’s Ryūko Matoi and sentient sailor suit, Senketsu demonstrated, banter between a hero and a possessed object can be imaginative. But here, the blade does little more than offer on-screen text. “Kill! Kill! Kill!” and “This Place Is Very Dangerous” Kuro exclaims, habitually stating the obvious. Occasionally, he does try to offer a bit of assistance as you navigate through the three-hour trek, but again his assistance is readily apparent.

Regrettably, Jack’s skillset is only marginally better that your companion’s advice. Sure, the swordsman can dish out damage. Each successive hit amplifies in power, making the eliminating of more formidable foes interesting. But responsiveness isn’t one of the game’s best qualities. Considering you’ll have to hurdle, double-jump, and wall-leap around the underground network of tunnels, you’ll likely bump into spikes and foes with vexing frequency. 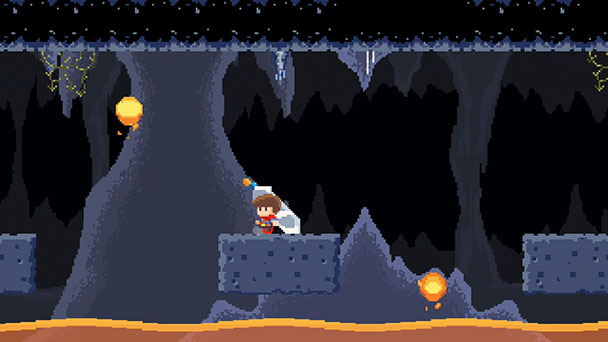 When you approach a precipice, your perspective pans down to reveal the situation below. But it moves so leisurely, you’ll wish control you had manual control over the camera. The Tale of The Sword’s map is hardly better. You’ll won’t earn it until close to the end of the game. And when you do use the map, it neglects to show areas you’re explored and shows only your immediate surroundings.

A Fleeting Journey with Few Unlockables

Like most of its contemporaries, JackQuest provided players with new weapons and abilities. You’ll receive a bow to target enemies from a distance and well as navigational aids like being able to double-jump and remain underwater for extended periods. Yet whereas most genre entries gate off unexplored areas by granting access with new talents, The Tale of The Sword often opts for collectable keys, which feels a bit unnecessary. 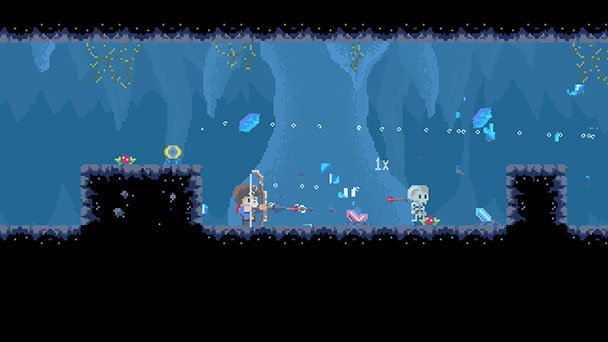 There’s also a huge schism between the difficulty of exterminating regular foes and the title’s five bosses. Fighting the former are enjoyable, especially since adversaries like slimes and spiders gradually grow in formidability throughout the game. Another clever aspect is that the bosses resembled powered-up versions of the antagonists before it, foreshadowing the confrontations. Although predicting the patterns of these elevated foes isn’t tough, JackQuest lives very little room for error. As such, you’ll be using a special ability, which is tied to a meter. Recharging your special requires finding crystals or purchasing items in the one of the pop-up shops that dot the labyrinth, rather that being tied to a cool-down timer. In execution, it feels a bit unfair, and you can expect to repeat the run up the boss dozens of times because of this design decision. In the game’s favor, there are plenty of save points, and you can purchase a torch which permits you to save anywhere. But oddly, JackQuest doesn’t replenish your health gauge, which feels unnecessarily punitive.

You Don’t (Want to) Know Jack

There are faint glimpses of potential in JackQuest: The Tale of The Sword. Seizing control of a character with an oversized sword as he makes his way through a hostile award is a promising premise. But all too often, the game spoils any sense of satisfaction with design decisions that make play feel like a predictable chore. After saving your loved ones across countless titles, JackQuest is the rare game that will leave you apathetic in the face of adversity. Sorry, Nara. 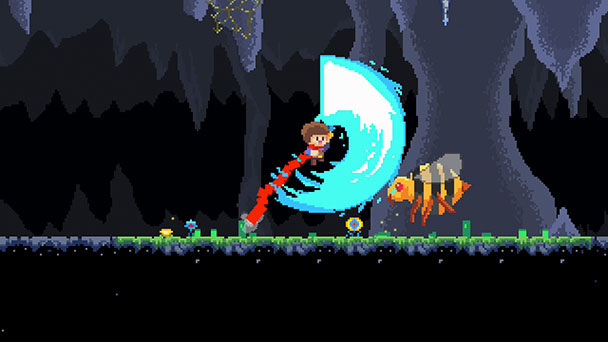 JackQuest: The Tale of The Sword was played on
Switch with review codes provided by the publisher.

JackQuest: The Tale of The Sword review
There&rsquo;s little of JackQuest: The Tale of The Sword that doesn&rsquo;t feel overtly familiar. The game opens with a cinematic that recalls the succinct set-up of titles like Super Mario Bros., Donkey Kong, and Ghosts 'n Goblins. The game&rsquo;s eponymous protagonist is about to acknowledge his love for Nara, when a giant green orc emerges and kidnaps the maiden. As with almost any &lsquo;damsel in distress&rsquo; development, the lead leaps into action, traveling down through a labyrinthine underworld to rescue his love. Sure, it&rsquo;s a cliched impetus, but if JackQuest&rsquo;s action either challenged convention or was thoroughly polished, the title&hellip;

Summary : With little distinctive elements and more serious balancing issues, JackQuest: The Tale of The Sword is a three-hour excursion that you’ll probably want to skip. The Momodora series is a recommended substitute if you’ve your looking for a pixelated Metroidvania.