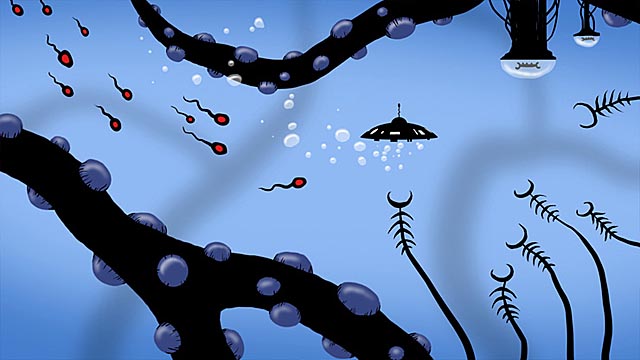 While games are adept at providing pulse-quickening thrills or poignant plotlines, one of the most salient sensations can be the feeling of discovery. From uncovering the ability of your boomerang to capture unreachable coins in The Legend of Zelda to determining the attack patterns of Fygars and Pookas in Dig Dug, discerning a game’s mysteries is often a memorable experience. Although recent release Insanely Twisted Shadow Planet uses ‘Metroid–vania‘ exploration at its broad template, the gratification of unearthing the title’s fascinating nuances help deliver one of the more satisfying experiences of the summer.

Using a storytelling approach which forgoes text, dialog, names, and often music, Shadow Planet‘s avoids typical storytelling methods. Instead, the game’s succinct plot in conveyed through the infrequent cinematic and  experimentation . It’s an inspired design decision which tasks players with classifying each new object they come across. Since nearly everything looks prickly and foreboding, the traditional  tropes of light/soft objects being harmless are thrown out. On Shadow Planet, dark,  thorny vines prove harmless, while tiny, innocuous alien guppies prove lethal- supplying a sense of gentle uneasiness throughout the player’s five-hour journey. 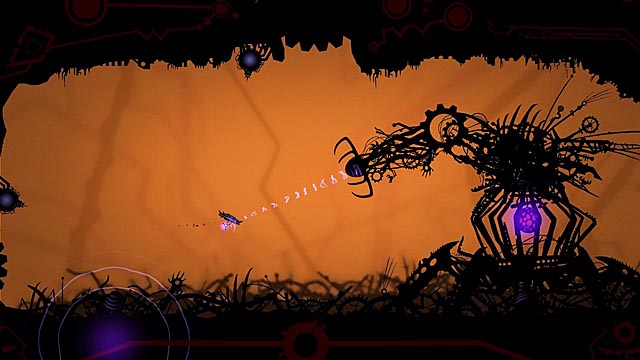 Likewise, players are given a robust set of tools to navigate the exotic landscapes. The first instrument you’ll encounter is a handy item which allows players to scan enemies and certain areas (ala Metroid Prime), allowing for an option, unobtrusive help system. Later, gamers will unearth upgradable blasters, a telescopic arm, a shield, buzzsaw and even a reflective laser, which can be activated with the right stick or assigned at hotkeys to the 360 controller’s face buttons. While the majority of Insanely Twisted‘s toolset lends itself to a wonderfully rewarding experience, two blemishes exist. While puzzles invite players to utilize items in creative ways, there’s some redundancy to the conundrums; once you figured out how to bypass a particular obstacle, additional instances of the same riddle aren’t as rewarding. Secondly, the title’s shield is woefully underutilized.

These small faults aside, controlling the title’s flying saucer feels faultless, with the game’s camera impeccably framing the action. Elegantly, the developers applied just enough momentum and mass to the ship, insuring that moving your craft doesn’t feel like manipulating a cursor. Thankfully, with an easily accessed map and a waypoint indicator on your toolset HUD, navigation through the labyrinthine selection of caverns, submarine grottos, and windswept tunnels is effortless as well. While 2D Castlevania and Metroid games typically prohibit passage to new areas until some unknown tool is acquired, Shadow Planet’s map screen can articulate which items are needed, avoiding frustration. Of course for experience players, the title’s candor and lack of well-concealed stashes can sully the sensation of exploration. 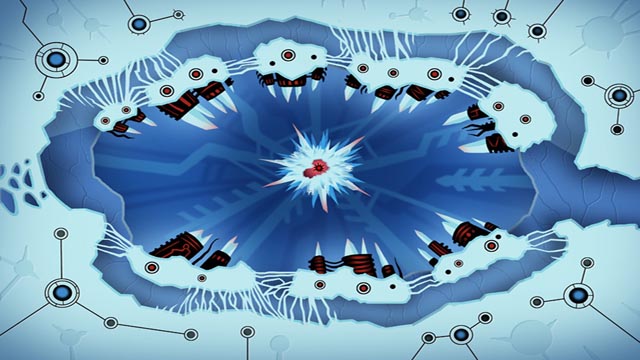 For players yearning for a challenge, Insanely Twisted Shadow Planet’s Lantern Run presents an appealing survival mode for up to four local or online participant. Each player transports an enormous lamp through a procedurally generated, side scrolling cavern as a giant tentacle beast threatens to extinguish the team’s lighting. While the variation won’t offer much to solo gamers, groups should enjoy this interesting offshoot.

Although Insanely Twisted Shadow Planet‘s foray unto a shadowy and unwelcoming planet is woefully terse, the title surrenders a rewarding journey brimming with a sense of discovery. In an age where most  gamers are accustomed with the familiar, that makes Shadow Planet‘s voyage worth its fifteen dollar admission price. 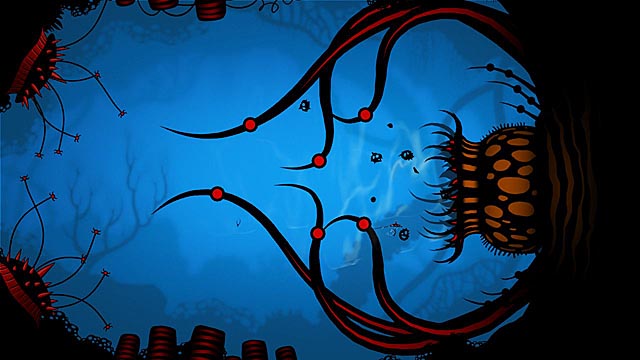