We guide a voracious, vomit-prone pig around eccentrically-themes stages in Pig Eat Ball and take control of a Rabbit and Fox trained in the art of ninjutsu in Ninjin: Clash of Carrots. 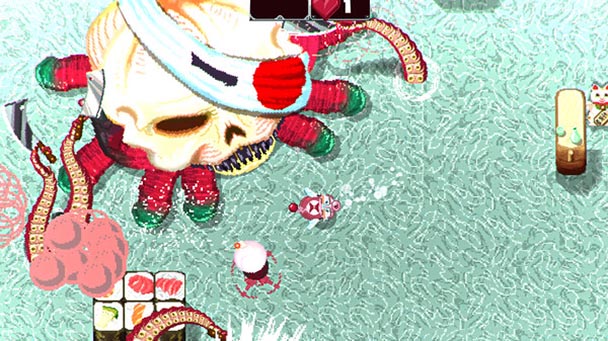 Indiana-based Nathan Fouts is a figurative wellspring of creativity. Following his work on the Resistance and Ratchet & Clank franchises, he left Insomniac to craft his own unique experiences. The results have been consistently fulfilling, with consistently offbeat yet engaging efforts like Shoot 1Up, Weapon of Choice, Explosionade, and Serious Sam Double D XXL, earning the developer a growing following. With the release of Pig Eat Ball on PC, Fouts fortifies his status. Exhibiting the same unconventionality, playability, and polish as Mommy’s Best previous releases, Pig Eat Ball is abnormally addictive.

Like many of Mommy’s Best efforts, the plotline is an exercise in playful irreverence. Here, conflict arises between a father and daughter when the patriarch determines his daughter should be considering marriage. But his offspring has plans of her own, and satirizing Superman, disguises herself with a pair of eyeglasses. If the synopsis sounds pedestrian, note that the father has a cake for a head, his advisors are giant shrimp, and his daughter is a pig who eats tennis balls. And yet, it gets weirder. 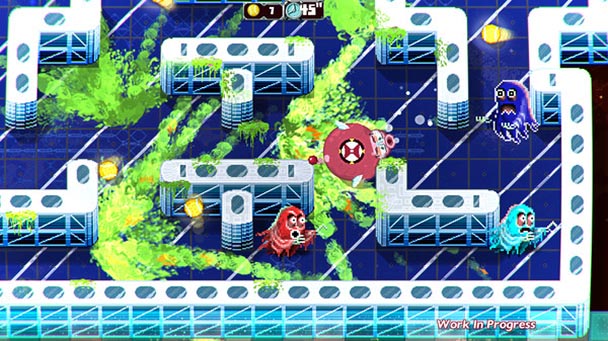 The games stages send the protagonist through a succession of maze-like environments. Across these, Pig Eat Ball revels a myriad of devices that alter gameplay. Some tile pieces can be broken by boosting through them, while others confine the tennis balls she needs to consume in specific areas. But as Piggy eats tennis balls she grows in size, prohibiting her from fitting through some narrow choke point on the playfield, goading her to use her signature move- barfing.

A button press lets the glutton regurgitate all of her collected tennis balls, projectile vomiting them back into the environment where the bounce around with wild abandon. But they’re also covered in green slime and if Piggy eats three vomit-coated tennis balls in quick succession, she transitions into a queasy state. When this happens, you can offset an inopportune puke by intaking new objects, pushing Pig Eat Ball to frantic levels. Supplemented by a level editor, there’s a gluttonous amount of fun to be had, especially because each stage manages to explore new mechanics. 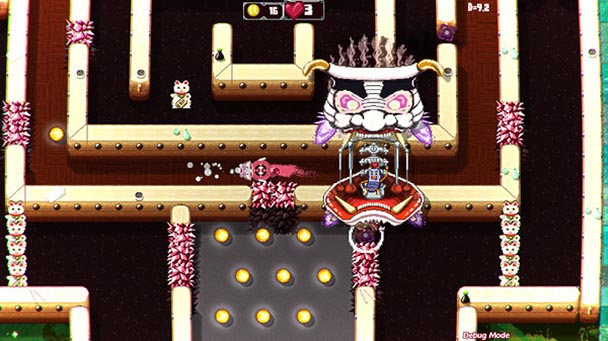 Recommended for: Players who appreciate the simplicity and play of classic arcade-style games. 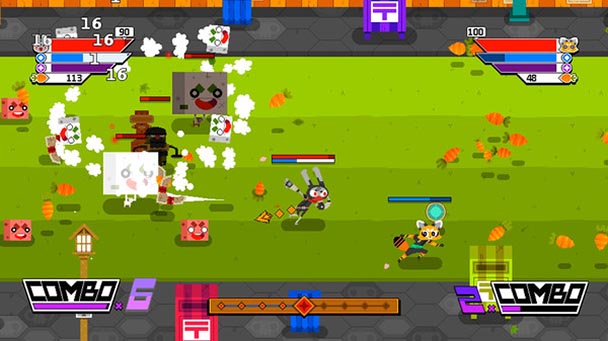 While Steam has an abundance of games, there’s still not enough of those captivating Nintendo-esque titles in their library. There’s always a need for the type of experiences that make monitors radiate vibrant hues, keep hands clinched around controllers as cartoonish characters frolic about. Luckily, the release of Ninjin: Clash of Carrots help to fill that void a bit.

As the title implies, players take control of the eponymous character, a sword-carrying, shuriken-tossing rabbit (or Akai, the ninja fox in two-player co-operative mode). Blending elements of the beat ‘em up, shoot ‘em up, and endless runner genres, Clash of Carrots permits protagonist to move freely around a horizontally scrolling playfield as they tackle waves of increasingly more formidable enemies and gather the carrots they leave behind. 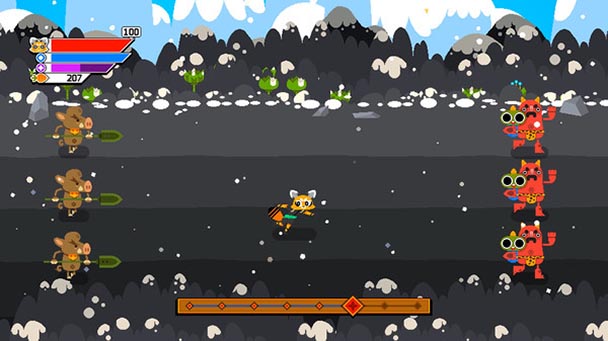 Most of the time you’ll want to ensure that foes are to the right of you, since your sword swipes in that direction. Permit adversaries to get on your left, and they strike at you, which whittles away at your health bar. While moving around the screen can put lesser opponents in a prone position, intermittently you’ll need to dash around the screen, shifting through a stampede of cartoonish samurai. Not only does this allow you to gain an advantageous position, but you’ll be invulnerable when you sprint about. Alternatively, you can flick the right thumbstick to launch projectiles, which is especially handy against explosive enemies. Naturally, to keep players from abusing these two abilities, both are tied to gauges that gradually replenish. You’ll also have to keep an eye on your health meter, which steadily decreases as enemies attack you. Luckily, you’ll gain a bit of your energy back on the end of each wave, depending on your performance.

Your journey to take down the game’s main antagonist, Shogun Moe, pushes you across a Super Mario Bros-like world map, and well as an endless mode that strips away your loadout, but provides dividends on a steady basis. If Clash of Carrots has a fault, it’s that the game ramps up the difficulty too soon, whereas a more gradually intensification would have delayed the sense of frustration that often occurs before you enter a boss fight with only a fraction of your health. To help remedy this situation, Clash of Carrots permits players to spend their collected carrots on new weapons, projectiles, and passive tools. 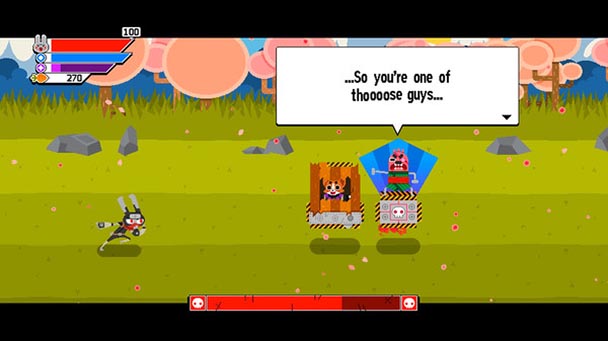 Recommended for: Gamers who don’t mind a bit of a challenge and the need to grind to make it through a creative amalgam of genres.