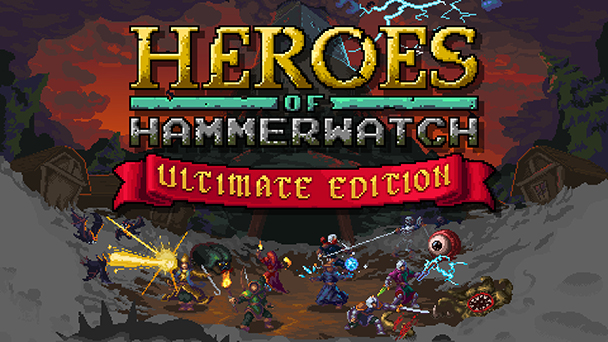 With a diminutive 301-megabyte footprint, and a gameplay loop that’s perfect for brief sessions, Heroes of Hammerwatch makes a compelling case for residency on your memory card. Those seeking a twin-stick action dungeon crawl elevated by roguelike elements might want to round up an adventuring party.

Crackshell’s 2013 release of Hammerwatch fulfilled several passions, extending an engaging, charmingly pixelated dungeon crawl. Reminiscent of Gauntlet, players selected from one of five classes (Knight, Ranger, Thief, Warlock, or Wizard), who each had their own distinctive aptitudes. With the ability to host local and online expeditions for up to four cooperative partners, Hammerwatch was also a stimulating test of the synergy of your adventuring party, or a consummate test if you ventured solo. If you stuck with it, you’d eventually conquer each area, as you memorized the level design.

With Heroes of Hammerwatch, that strategy is now obsolete. Using procedurally-generated levels, the sequel’s action hews closer to a roguelike, which offers a number of upsides. The most substantial benefit is the sense of motivation spurred by a system of persistent progression. The beginning of the game drops players in a near-abandoned mining town named Outlook, where you’ll assist ten of the surviving citizens build up the city back up. 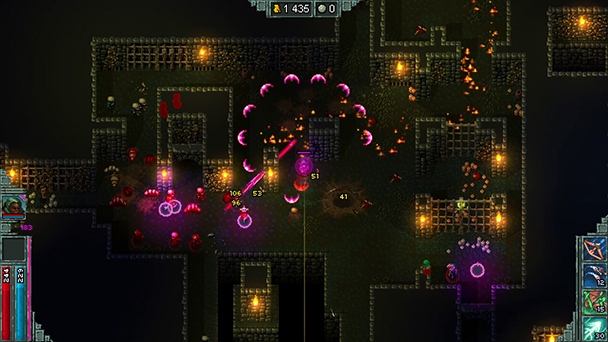 Fortunately, your motivation isn’t entirely altruistic. In turn, the folk vend opportunities for growth, creating a rather compelling gameplay cycle. Whether it’s the exploratory essentials sold by Darren the Supplier or forging a fountain that can invoke positive effects, there’s an ample number of projects to be pursued. But be warned that progress can be painfully slow at first but stick with Heroes and the pace will pick up, allowing you to purchase that coveted companion.

Unsurprisingly, the only way to finance these efforts in by risking your life gathering materials in the local mine. Collection involves two perilous hazards, Hammerwatch’s roving assortment of creatures and environmental traps like jutting floor spikes and walls that emit a nonstop succession of darts. 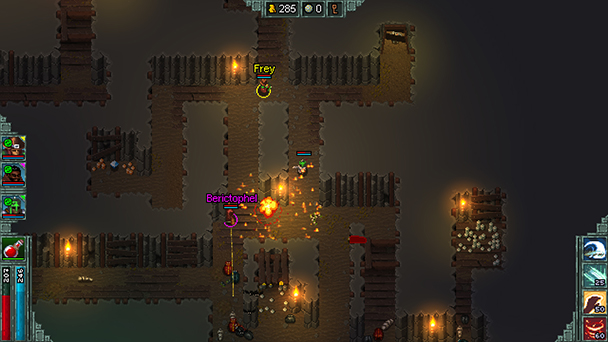 The first require an array of strategies to deal with, since each type of foe behaves differently. The latter tend to safeguard abundant amounts of coins, ore, and gemstones, but pleasingly, levels habitually permit prudent players to circumvent these dangers. Pleasing, there’s a variety of milieu on hand, from dungeons and prisons carved from stone, arid deserts, and even gladiatorial arenas, each with their own assemblage of adversaries.

Each level in the mine offers another intriguing risk/reward situation. Make your way to a mineral elevator and you can drop all your collected goods back to town for safekeeping, albeit at an excessive tax rate. Venture upward with materials in store and you might be able to secure a better deal, but you risk dying and losing everything. Pleasingly, the game’s low-fi visuals permit Heroes of Hammerwatch to run at a steady framerate, even when a throng of giant grubs are making a beeline for your position. 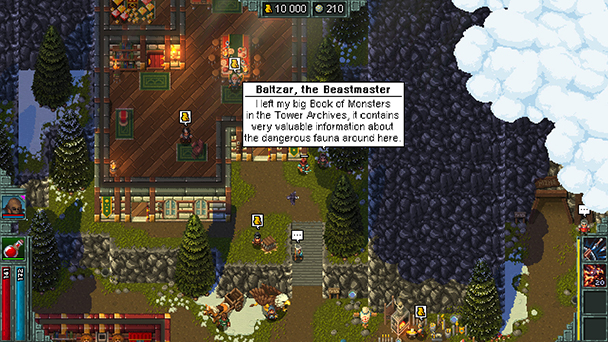 Pleasingly Heroes of Hammerwatch’s control scheme means you’re a powerful opponent. The left stick moves your character, while the right rotates a line that represents your aiming direction. Although the visual indicator might not be too useful for melee-based characters like the paladin or warlock, it permits pinpoint accuracy for rangers or the witch hunter, one of the game’s four new playables. Undoubtedly, there’s something quite gratifying about alerting a horde or enemies and gunning down the whole, projectile-launching bunch.

Play with up to a trio of online assistants and Heroes of Hammerwatch becomes a slightly different experience. While adversity is diminished by the potency of additional adventurers, you’ll still have to act like an interconnected team. With a paladin acting as a tank, and a priest performing regular healing, an online game pushed players into familiar roles that everyone seemed happy to obey. The sole downside is that only a few days after launch, the game’s servers are tragically vacant. 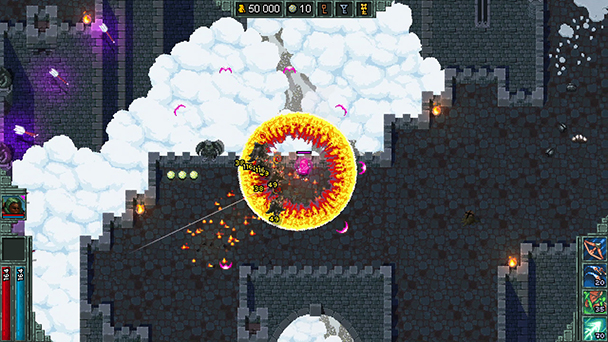 Inevitably, death will find your hero. And when it does, you’ll lose any wealth that you didn’t send back to town. Mercifully, upgrades to your character and to the town persist, providing the opportunity for each run to be slightly more productive. Perks available from Outlook’s upgrades and well as leveling up your adventurer contributes opportunities for augmentation. But expectedly, the resilience of your adversaries increases as well, diminished the benefits of grinding.

Although some of Heroes of Hammerwatch’s details can be hard to perceive on the diminutive Switch Lite screen, that’s about the knock again this portable adaption of the PC title. Bundling the base game along with the Pyramid of Prophecy and Moon Temple campaign, the package offers a wealth of explorational action for a reasonable price. If you’re a fan of franchise like Gauntlet, Diablo, or Torchlight, Hammerwatch won’t disappoint.

Heroes of Hammerwatch Ultimate Edition was played
on Switch with review code provided by the publisher.

Heroes of Hammerwatch Ultimate Edition review
With a diminutive 301-megabyte footprint, and a gameplay loop that&rsquo;s perfect for brief sessions, Heroes of Hammerwatch makes a compelling case for residency on your memory card. Those seeking a twin-stick action dungeon crawl elevated by roguelike elements might want to round up an adventuring party. Crackshell&rsquo;s 2013 release of&nbsp;Hammerwatch&nbsp;fulfilled several passions, extending an engaging, charmingly pixelated dungeon crawl. Reminiscent of&nbsp;Gauntlet, players selected from one of five&hellip;

Summary : Heroes of Hammerwatch Ultimate Edition bundles the game, a trio of expansions (along with characters and the build-a-class Mercenaries), for a price that’s a bit cheaper than the original PC version. That’s some loot worth keeping, especially if you’re a fan of the twin-stick roguelikes.

Previous: Hellbound review
Next: Is It Wrong to Try to Pick Up Girls In A Dungeon? – Infinite Combate review