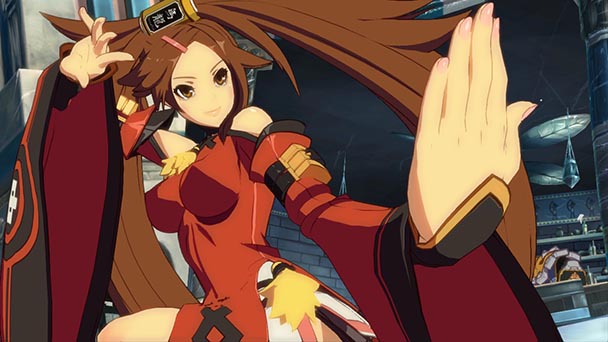 Since the release of Street Fighter II: The World Warrior in 1991, Capcom has enjoyed a protracted command of video game pugilism. But success breeds eager contenders and in 1998, Arc System Works crafted Guilty Gear, a scrappy, reckless, and intense rival who strode into the fighting game arena accompanied by Daisuke Ishiwatari’s searing entrance music. The two opponents haven’t enjoyed a direct showdown, but with Street Fighter V’s halfhearted launch last February, the release of Guilty Gear Xrd -REVELATOR- has a chance to win over an audience of fighting game fanatics, especially with an exceedingly proficient PC port.

But if Revelator has a weakness, it’s the redundancy of its repertoire. At its core, the title is an iteration of last December’s Guilty Gear Xrd –Sign-, with Revelator receiving a PS4 release last June, before making its way onto Steam. Although that entails being built on an exceeding solid foundation, it also means that a quintet of new characters are likely Revelator’s biggest draw, especially for those who pummeled their way through the franchise’s console iterations. As Ishiwatari-san has stated, Guilty Gear’s ongoing production strategy would rely on expansions, rather than comprehensive sequels or revisions. 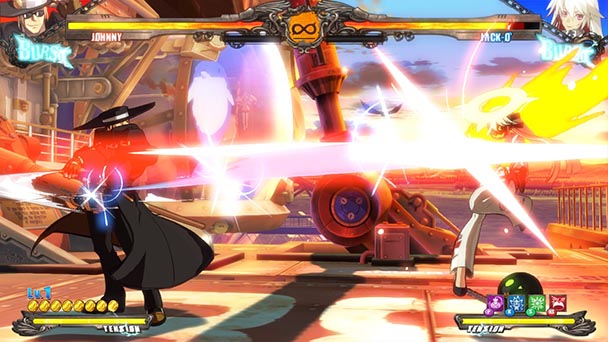 But for those who enthusiastically discuss the details of fighting games are likely to notice a laundry list of subtle changes. In theory, the biggest addition would seem to be Burst Overdrives. As the name implies, these offer a powered up Overdrive Attack at the expense of half your Tension Gauge and the entirety of our Burst Meter. Although they seem like an enticing tactic for aggressive players, against a multitude of online players they were infrequently utilized by opponents, suggesting a slight imbalance in their risk-to-reward proposal. A much more common tactic revolved around Revelator’s Blitz Attacks, which offer a tempting transition from defense into offensive strike.

But if you’re one of those bewildered by the terminology in the preceding paragraph, fear not. Unlike Capcom’s golden goose, Revelator offers an in-depth, guided succession of interactive lessons. Taught by the game’s new pumpkin mask-wear protagonist, Jack-O’, the game’s starts with the fundamentals before gradually covering Guilty Gear’s more technical traits. Stick with it and you’ll be executing combos and adding Homing Dashes, Blitz Shields, and Roman Cancels to your arsenal. But more importantly you’ll be thinking about genre principles like character reach, context-based counters, and rhythm. 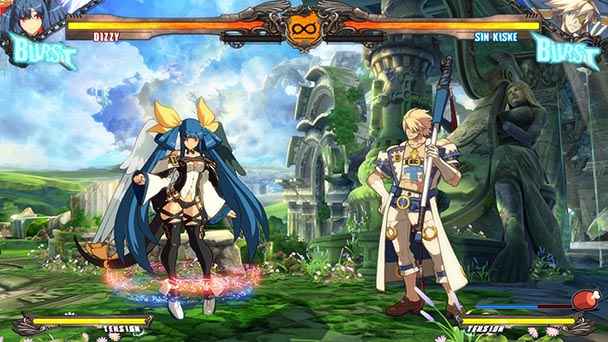 Pace is a particularly important element in Guilty Gear Xrd, as many advanced moves are regulated by your Tension Gauge. Play it slow and methodical and you’ll be forced to fight with a subset of your arsenal, unable to muster up a momentum-shifting super. As such, you’ll learn that Guilty Gear favors the offensive, with success depending on the ability perceive an opening and respond with unremitting aggression that keeps the Tension Meter maxed. Although managing both Tension and Burst takes a bit of practice, once your grow accustoming to the manic multitasking, going back to less sophisticated fighters can be difficult.

For players intimidated by the lexicon of pugilistic language, Revelator offers at least one contenting conceit. Borrowed from BlazBlue, Stylish Mode allowing players to easily dish out both combos and single-button specials, while simplifying defense. To ensure that gamers don’t grow too accustomed to its use, incoming damage is increased about 25%. Essentially, it’s a fair trade-off, shrewdly hoping to ween combatants off its button-mashing benefits and allowing match-up between divergent skill levels. 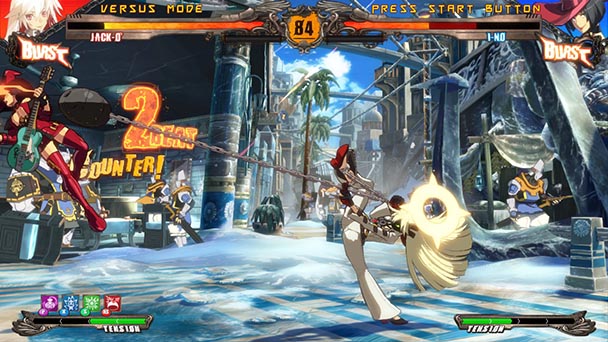 Whereas the PlayStation version permitted cross-play between the PS3 and PS3 iteration, naturally that’s missing here, with Revelator utilizing Steam’s servers. For fans of fighting communities, the PC port shirks the thirty-player arcade lobbies found in the console versions, allowing for up to eight combatants to converge, although Arc has signaled this constraint will be mended with a forthcoming patch. Pleasingly, play on the servers proved to be generally free of lag, especially when matchmaking omitted opponents with high ping rates. Another positive was the general efficiency of the port, with an $600 i5/GTX 960 laptop easily providing fluid sixty-frame per second output.

But one potential blemish is Revelator’s single-player component. Much like Sign, it’s a visual novel devoid of any interactive elements, which has the potential to disappoint those hoping that battles will bookend major plot points. On the upside, credit should be given for the amount of character development and the depth of Guilty Gear lore. Unlike most genre entries which extend endless variations on Enter the Dragon’s mixed-martial arts global championship, Revelator constructs an actual (and complicated) storyline, forming fighters that are more than just a crude collection of traits. Evidently to expedite the title’s stateside journey, dubbing was dumped for this iteration. 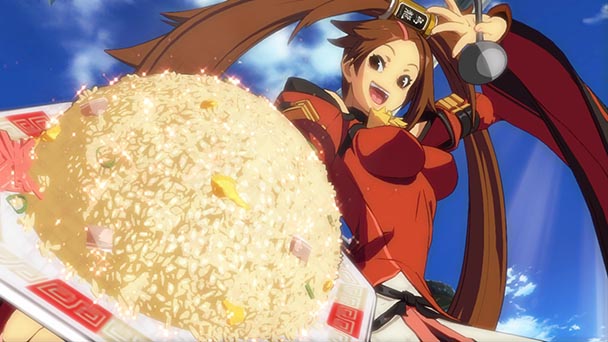 Sign’s Medals of Millionaires (or M.O.M.) mode makes a reappearance. Again, players have to persevere with a single health bar against a procession of foes. Survival necessitates the increasing your base stats, which is accomplished through the collection of medals and points. From acquiring offensive elements like bombs to the incorporation of elemental resistances, M.O.M. is fairly complicated, feeling like a curious amalgam of fighting and role-playing genres. Pleasingly, it pays dividends and with that currency players can fish for unlockables like alternative costume colors and voice banks.

This time out, M.O.M. and the game’s other modes feel more satisfying given Revelator’s augmented roster. Fan-favorite Johnny makes a reappearance after disappearing from Sign’s collection of combatants, with the Jellyfish Pirates leader adept at issuing mid-ranging attacks and a coin-tossing technique that augments his arsenal. Likewise, Jam Kuradoberi makes her first appearance since the Guilty Gear XX series, bringing an ability power-up and deliver a procession of kick-based punishment. Naturally, Raven, a long time non-playing enemy from the franchise, bring his own brand of avian- adversarialism, blending aerials, talon attacks, and ranged ferociousness.  Tutorial teacher Jack-O’ offers potential to players willing to commit to her eclectic style, which is rooted in the placement of servant-summon devices.  Finally, there’s Kum Haehyum, a young priestess inside an exoskeleton that resembles a bearded, older martial arts master. Potential purchasers should know that all of PlayStation’s supplements: Kum, Raven, color sets, and system voice packs are included in the Deluxe edition, making for the complete Relevator experience. 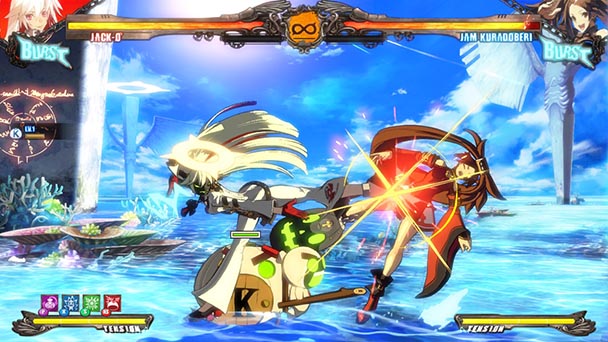 Gear Gear’s imaginative character designs have always drawn inspiration from anime, but until Sign, those aspirations weren’t fully realized. Revelator take a small step forward from its predecessor, adding ambient lighting and special moves that cast their own illumination. In execution, there’s no other two-dimensional fighter that exhibits more detail and fluidity; how the title has used polygons to simulate sprite-based aggression is nothing short of astonishing. Naturally, Ishiwatari-san’s driving, melodious soundtrack flawlessly sets the tempo for the on-screen antagonism, making each match sound like a metal-induced opera.

The sole downside of Guilty Gear Xrd REVELATOR’s comprehensive package stems from the cost. The game’s collection of content and consummate polish certainly warrants the sixty-five (currently fifty-eight) dollar price for the Deluxe Edition. But Gear-heads who bought Sign may feel that there’s just not enough new substance to justify the purchase of this new iteration, especially when the console version is currently selling for about half the price of this port. That caveat aside, if you’re looking for a fighting game for your PC, this is the full-priced entry of choice. Sorry, Ryu, you had a good run, but your long-running reign has been upset. 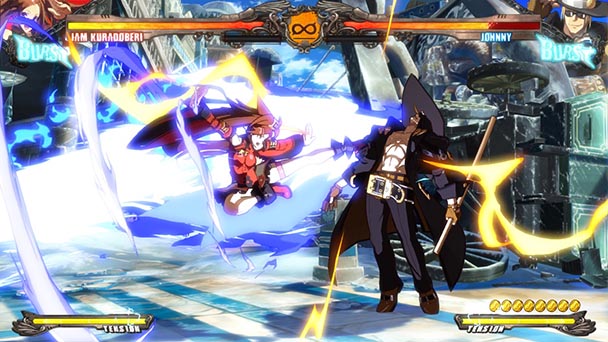 Guilty Gear Xrd -REVELATOR- was played on the PC with review code provided by the publisher.