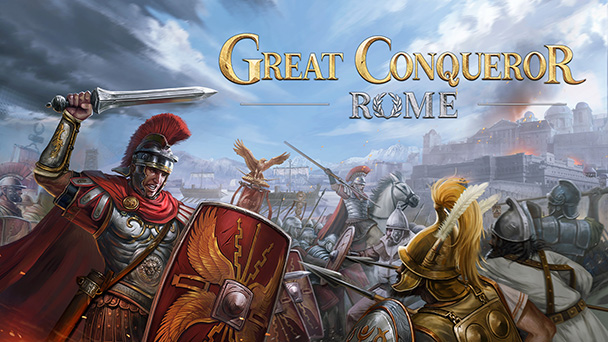 After tackling War World II and the Napoleonic Wars, EasyTech’s third war game transports players to the third century BC, where you’re transform Rome from an ambitious republic to a sprawling empire that spans across Europe, Asia, and Africa. 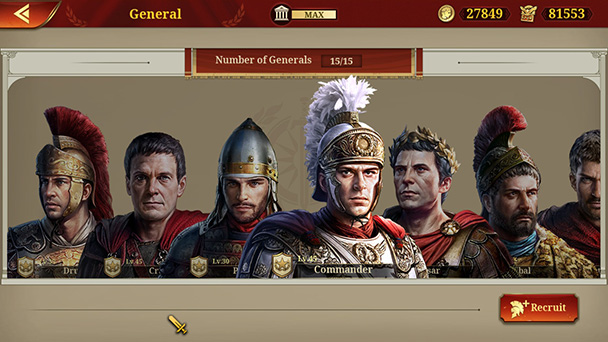 Although titles like Nobunaga’s Ambition: Taishi, Romance of the Three Kingdoms XIV, and Europa Universalis IV would be welcomed by fans on Switch, porting these grand strategy games could be difficult. While Nintendo’s hybrid boasts 4GB of internal storage, that’s half of what is found inside of most contemporary consoles and gaming PCs. As such, any game that attempts to represent the military, political, and diplomatic aspirations of an empire must make a few concessions.

With the release of Great Conqueror: Rome onto Switch, developer EasyTech takes on a wide, but underrepresented segment of world history. Here, a trio of campaigns depicts the rise of the imperial empire, starting with the Battle of Ticinus and concluding with Pompeys quashing of a rebellion lead by Quintus Sertorius, a historical span of 300 years. While there’s some blemishes, the studio finds a respectable balance between accessibility and sophistication, with performance that doesn’t detract from the martial tensions. 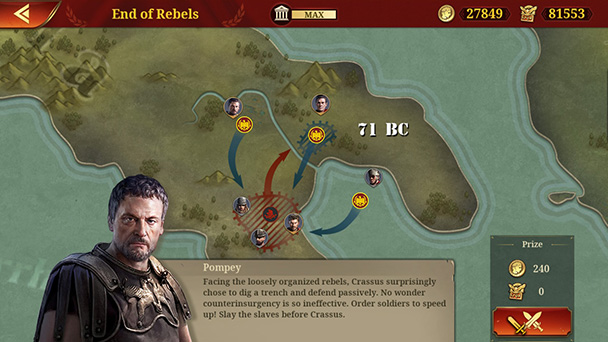 I suspect for some, names like Antony, Caesar, Octavian, and Spartacus will spark familiarity, with many knowing key moments in each man’s life. For better or worse, Great Conqueror: Rome doesn’t require nor reveal knowledge of motivations of even personality. Each episode extends one main objective as well as two option sub-goals but doesn’t squander any time with exposition.

As such, the game might spark interest in the era, but don’t expect to glean many historical insights. One of the most fascinating aspects of the era were the irrational emperors like Commodus, Nero, Caligula, and Domitian. Sadly, none of these wild men get receive much mention, so you won’t hear about Commodus stint in the gladiatorial arenas, Nero’s inflammatory attempts at urban renewal, or Nero’s sexual depravity. 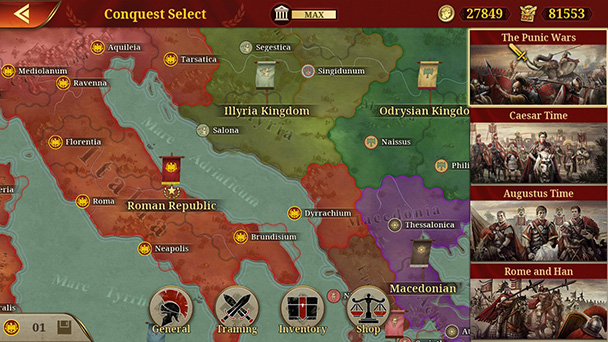 While Great Conqueror’s battles are vaguely rooted in reality, they’re also pared down to Advance Wars-like simplicity. But what’s divergent is streamlined Nobunaga’s Ambition-like politicking. Swing countries can be swayed with a bit of aid but habitually return to nonalignment, while natural counties can eventually be won over. If you do behave like a true belligerent emperor, expect your public approval to take a hit. Periodically, missions present players with an option letting you choose your offensive strategy.

Another interesting mechanic is town construction, with developers leading to stat boosts or new unit types. Often, you’ll feel the pinch of trying to safeguard your towns while using units to takeover enemy cities. In Conquest Mode, national technologies add divergence to each playable faction. Depending on who you’re playing as, rewards range from a reduced cost to city building to a fire catapult that can lob burning objects. 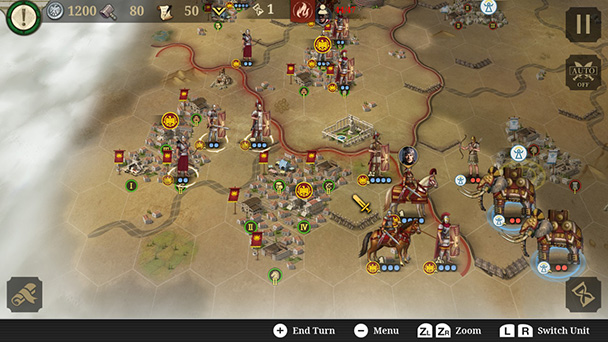 While forging alliances and growing cities are important, both take a backseat to battling. With an optional hex-based overlay, Great Conqueror: Rome provided decently sized battlefields. There’s a bit of camera control, with players able to zoom in and out to view your troops, which consist of infantry, archers, and cavalry, as well as naval fleets as you advance through the campaign. Of course, there are cultural-specific units as well you you’ll witness catapults as well as Carthaginian war elephants.

Turn-based combat adheres to the conventional move and attack approach favored by games like Advance Wars with the ability to cycle through units who haven’t acted yet. While the cursor-based input scheme is mostly effective, you won’t be able to zoom too far in, so there’s the occasional errant move (and no ‘undo’ function). Oddly, there’s no option for touchscreen support as well. 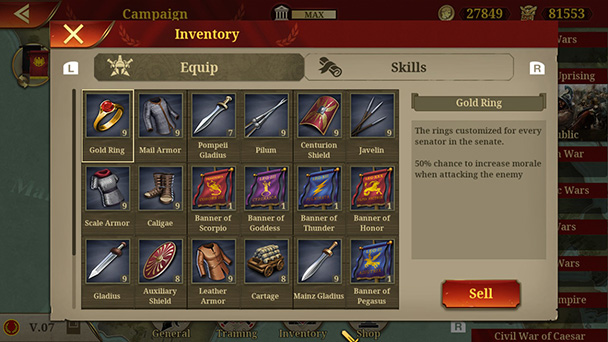 But beyond this issue combat is gratifying. Seasoned strategists will appreciate the game’s tactical possibilities, where some small squads are capable of defeating throngs of enemies. Pleasingly, battles aren’t dawdling clashes of attrition. You’ll attack, watching optional animations that depict the conflict, before on-screen digits reveal the number of fatalities on both sides.  This decision helps keep the pace lively, while still leaving an opportunity for different tactical approaches.

As a mobile port, the actual microtransactions have been removed, but the currencies still linger. Success in battle rewards players with the ability to purchase new generals, skills, and equipment, each providing an advantage in combat. Generals can even rank up, further boosting their effectiveness of the battlefield. 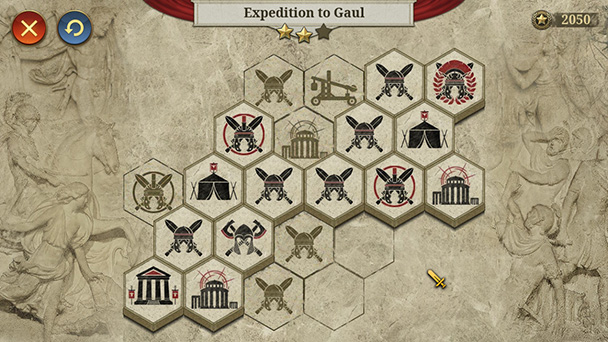 Beyond the main campaign, Conquest mode permits players to lead different countries. While three-star territories already have the resources for takeover, masochists might want to take the helm of a one-star underdog across a crusade that can last up to 300 turns. There’s also Expedition, where you’ll see just how far a finite number of forces can be taken. Here, generals who perish in battle are permanently out of the game, raising the level of intensity.

Like EasyTech’s previous titles, World Conquer X and European Conqueror X, Great Conqueror: Rome provides some moderately sophisticated wargaming that never gets bogged down in minutiae. Both diplomacy and military domination are streamlined, allowing historical battles that stretched out for months be achieved in less than an hour. With different era, maps, factions, and generals, Great Conqueror squeezes a lot into its 423 MB footprint. Switch strategists will want to consider this ambitious undertaking.

Great Conqueror: Rome was played on Switch with review code provided by the publisher.

Great Conqueror: Rome review
After tackling War World II and the Napoleonic Wars, EasyTech&rsquo;s third war game transports players to the third century BC, where you&rsquo;re transform Rome from an ambitious republic to a sprawling empire that spans across Europe, Asia, and Africa. Although titles like Nobunaga's Ambition: Taishi, Romance of the Three Kingdoms XIV, and Europa Universalis IV would be welcomed by fans on Switch, porting these grand strategy games&hellip;

Summary : Great Conqueror: Rome plays like Advance Wars with just a bit of Civilization. While it can’t measure up to either of the aforementioned classics, having a navy helmed by Cleopatra for less than a tenner certainly elevates the title. 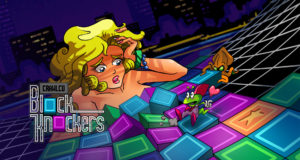