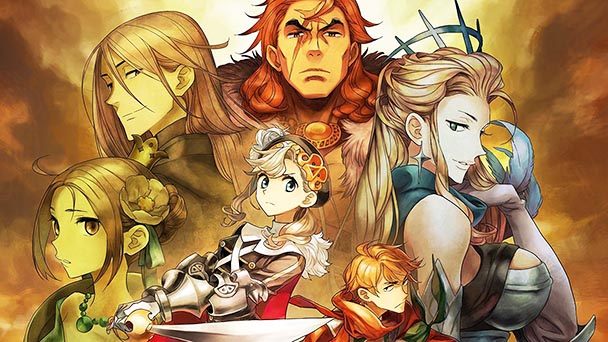 Japanese role-playing games are often criticized for not offering enough innovation. According to detractors, most new efforts do little more than recycle well-established plots and play mechanics.  But spend a few hours with either the PlayStation 4 or PS Vita release of Grand Kingdom and that contention will quickly crumple. Elevated by a brilliant combat system, a dizzying amount of party customization, and a cornucopia of bundled content that our peers across the Pacific had to pay for, Monochrome’s inaugural effort is nothing less than a triumphant success. More importantly, it also feels invigorating, making it an ideal choice for ardent role-playing aficionados.

Pleasingly, the title spares little time before introducing players to the battle system. Straddling the space between accessibility and depth, the adventuring party takes to a three-lane arena, with an indicator at the bottom of the screen revealing turn order. When it’s time for a character to engage enemies, a gauge at the bottom of the screen gradually depletes with movement and action. Like any commendable combat system, strategy is varied as players determined the best way to min/max their way across an ever-changing battlefield. 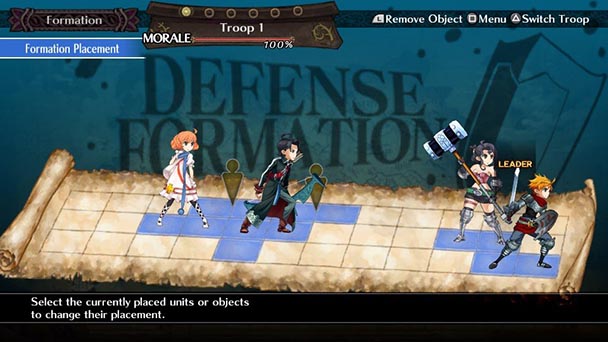 Soon, you’ll discover than success depends of the proper utilization of each of Grand Kingdom’s character classes. Pikestaff-wielding fighters are adept at melee strikes or can be used to guard less resilient magic users. Meanwhile, archers need enough space to launch a quiver of arrows at far-flung antagonists. While seemingly simple, there’s nice supply of nuance to be unearthed. Attack a character from behind and you’ll intensify the amount of damage incurred, while getting sandwiched between two adversaries can prove perilous. Soon, you’ll learn that juggling enemies can push them into other foes, netting a bit of additional injury. But in the same way, friendly fire is a constant threat, and it’s all too easy to singe a comrade with a wayward acid bomb. With the effectiveness of turn-base commands often determined by button presses and the tendency to inadvertently wound allies, Grand Kingdom can feel like a brainy take on Worms.

Like Team 17’s magnum opus, success hinges on having a full party. As soon as one of your teammates succumbs, it’s can be very challenging to rebound, especially when Grand Kingdom’s AI callously exploits your weaknesses. But if you cautiously guard, seize the advantage of an ally assist (or fortify against an imminent death), the tides can shift in a most gratifying fashion. Much of the enjoyment stems from the game’s conferring of combat abilities. Not only does each character have a bevy of offensive options, but players can venture into Kingdom’s menus and completely re-spec each member. If you appreciate equifinality in a game, then you’re bound to love the possibilities here, as there are a myriad of methods to advance. 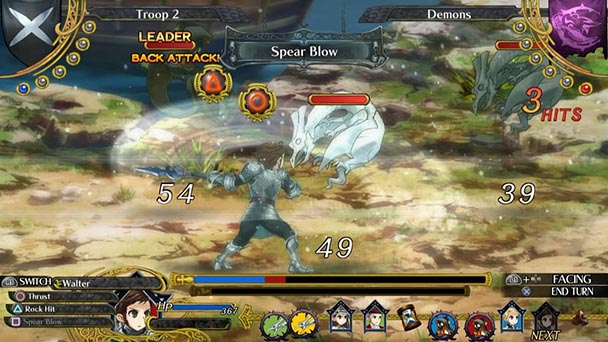 When you’re not trading blows with foes, the game offers an interesting, curiously abstract approach to navigation. Missions take place on a network of corridors, with players moving a board game piece toward a designed space. Beyond a turn limit, antagonism is found in both visible wandering monsters as well as the occasional obscured baddie. Furthering the board game motif, there’s the occasional trap, which presents a risk/reward proposition where players decide between hardships like a turn or health penalty. Pleasingly, there’s a wide variety of objectives from stealth-driven missions where you’ll have to sidestep foes to one where enemies assault with artillery rounds, forcing your team to evade incoming, highly injurious shells.

You’ll spend the bulk of your playtime between these two modes, meaning that story in Grand Kingdom takes a backseat. There’s certainty an impetus, with mercenaries shifting allegiances between four different factions, and a lead character named Flint, who’s both cocky and capable. But, the conventional long-winded, dialog-driven cut-scenes are nowhere to be found. Exposition sprouts during the banter between the unabashedly chauvinistic and impetuous Flint and his persistently prudent female assistant, Lillia. Smartly, conversation in Kingdom adopts a casual tone, which offers a pleasant reprieve from the faux-old English of most fantasy-themed games. 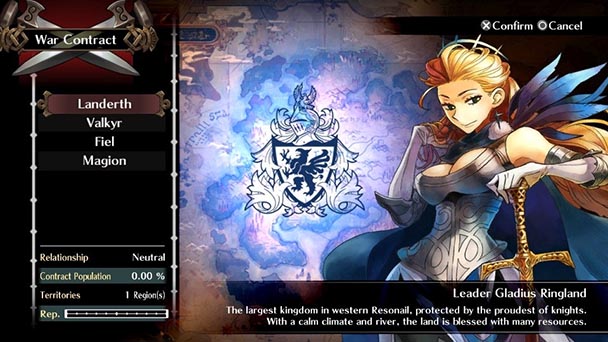 The quartet of countries plays a role in Grand Kingdom’s multiplayer component, with your party aligning itself with one of the realms. Once an allegiance is announced, you can take to the battlefield, to combat rivals in real-time or asynchronously. In execution, the secondary option feels a lot like Mob/Mafia Wars, with your squad reaping dividends based on statistical skirmishes. Although, it’s no match for Kingdom’s tactical showdowns, there’s something rousing about obtaining rewards during your downtime.

Each chapter takes about an hour to play through, meaning the original release of Grand Kingdom’s twelve chapters could be completed fairly quickly. For the Western release, NIS America was able to bundle all of the DLC content offering in Japan, adding another 36 chapters to the game, as well as introducing new characters and playable classes, extending an especially seductive value proposition. 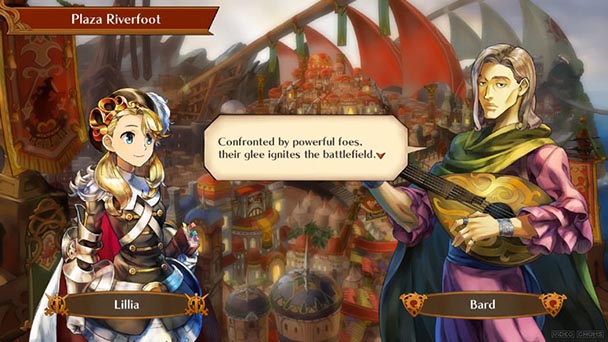 Although the game offers cross-play functionality between the PlayStation 4 and PS Vita iterations, the absence of cross-save is rather inexcusable. Considering how close in execution each version is, the deficiency is disheartening. For visual purists forced to choose between the two SKUs, the resolution and sixty frame-per-second delivery of the PS4 version makes it the clear choice, although the Vita entry is concisely fluid, save for a strange effect on one of the game’s menu screens. Regardless of platform, players will likely be enamored by the game’s exquisite sprites who each offer an array of charming animation. Musically, the game excels, with soaring post-battle fanfares and energizing battle themes complementing the dual-language voice over.

With an original and enjoyable battle system, Grand Kingdom is nothing short of a rousing success, adding Monochrome’s personnel to the pantheon of celebrated JRPG craftsmen. Even the game’s few foibles from the sporadic misleading attack names and errant ranged attack trajectory can’t diminish the delight found on the battlefield. Kudos to NIS America for bundling the downloadable content, which transforms a solid experience into one that truly spectacular and satiated. 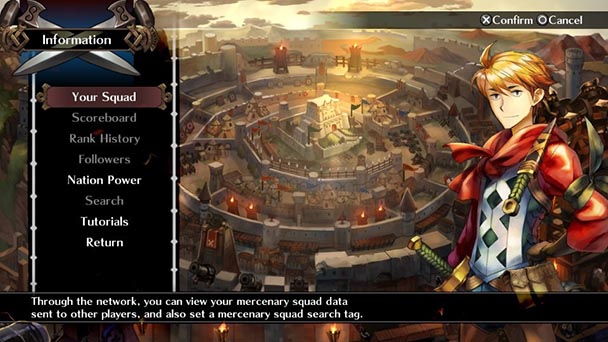 Grand Kingdom was played on the PlayStation 4 and PS Vita with review code provided by the publisher.

Grand Kingdom
Platform: PlayStation 4, PS Vita
Developer: Monochrome
Publisher: NIS America (NA)
Release Date: June 21st, 2016
Price: $59.99 for PlayStation 4, $39.99 for PS Vita via retail or PlayStation Network
Language(s): Japanese or English voice, English text
Grand Kingdom review
Japanese role-playing games are often criticized for not offering enough innovation. According to detractors, most new efforts do little more than recycle well-established plots and play mechanics.&nbsp; But spend a few hours with either the PlayStation 4 or PS Vita release of Grand Kingdom and that contention will quickly crumple. Elevated by a brilliant combat system, a dizzying amount of party customization, and a cornucopia of bundled content that our peers across the Pacific had to pay for, Monochrome&rsquo;s inaugural effort is nothing less than a triumphant success. More importantly, it also feels invigorating, making it an ideal choice for&hellip;

Summary : Tomohiko Deguchi’s time with Vanillaware, where we helped helm Muramasa: Demon Blade and Grand Knights History certainly paid off. This is one of of those rare role-playing experiences that transcends convention, allowing its unique combat system to shine.