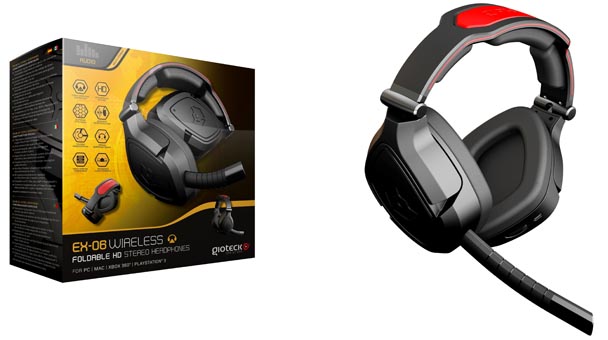 Across the last decade, a deluge of third-party accessory manufacturers have entered the console market, hoping their hardware will induce gamers to open their wallets. The tragic reality: while a growing number of these peripheral are adequate, there’s still a large quantity of lackluster devices poised to disappoint players. One unexpected surprise can be found in the Gioteck SC-1 Wireless Sports Controller. Overlook the company’s shamelessly suggestive “come get some” motto and garish color scheme and you’ll discover an accessory which fuses the best elements of the DualShock 3 and the Xbox 360 controller into a single, ergonomically-pleasing device. Five months after review, the SC-1 remains hooked up to our PlayStation 3 and is used as the default control method for everything except fighting games.

With the release of the Gioteck EX-06 Foldable Wireless Headset, the Hertfordshire-based peripheral maker has duplicated their success with the release of a superior audio accessory. While the unit shirks cost-escalating additions like Dolby Surround Sound and a replaceable battery, for gamers hoping for a reasonably priced but proficiently performing sound system- the $119 USD EX-06 strikes a skillful balance. Most amazingly, save for the peripheral’s grip on larger craniums, the headset has few flaws. 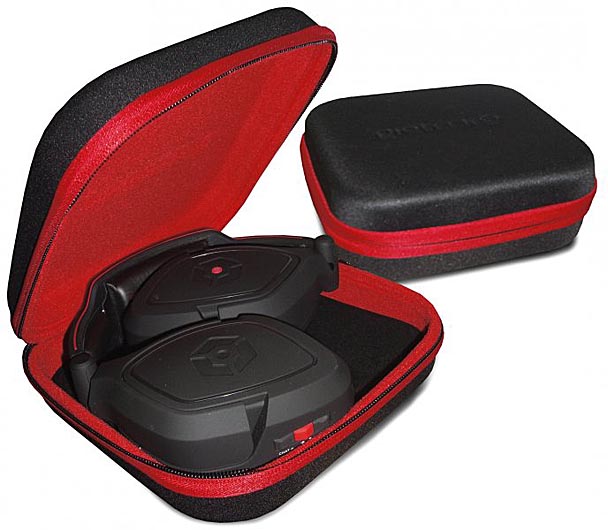 Opening the peripheral’s exterior packaging, owners will find an indispensable item which rarely accompanies full-priced headsets: a protective carrying case. Pleasingly, Gioteck’s synthetic fabric over plastic housing, makes an encouraging first impression, as players unfasten the wraparound zipper to find the device gracefully folded and securely situated around a form-fitting molding. Beyond the headset, a number of additional items are packed in- from a USB-powered transmitter, a 3.5mm connector cord, a cable with two pass-through RCA plugs, as well as the EX-06’s pliable boom microphone.

Hooking up the headset to most consoles is a largely unproblematic task. For gamers who attach their hardware to televisions via component cables, all they have to do in insert the RCA jacks into the audio line. For those who use a HDMI input, the process is just a bit trickier- with owners recommended to also use the original AV cables that came with their PlayStation 3 or Xbox 360 to grab audio. Most modern television owners, can use an easier method: seizing sound from either a headphone jack or RCA output that’s likely located on either the back or side of a TV. Gamers who have multiple consoles connected will certainly benefit from this technique. 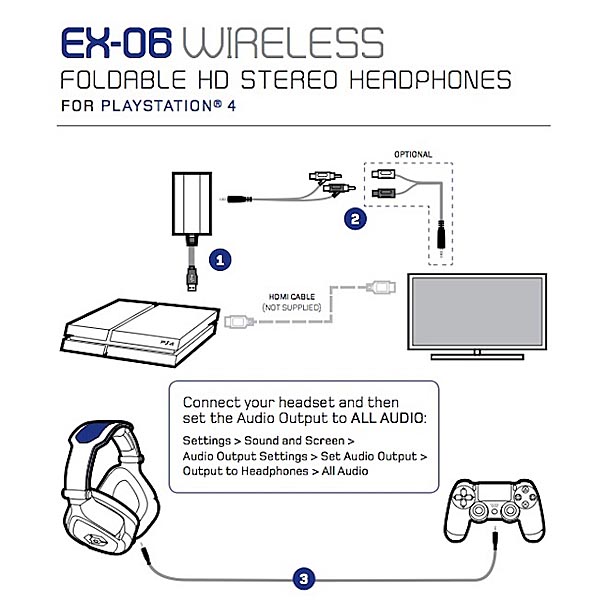 While this catalogue of contingencies might make the set-up process sound confusing, rest assured that it’s not. We were able to hook up a variety of consoles, from the PlayStation 4, Xbox One, Wii, Wii U, and even a NeoGeo Gold X to a variety of displays without incident. Alternatively, The EX-06 can be easily coupled to a PC by plugging in the transmitter to a USB port; users will want to use the supplied 3.5mm connector unless they are unbothered by monaural output. For those inclined nearly any audio-generating equipment can be attached- meaning the Gioteck headset can work with phones, tablets, and portables.

Pleasingly, the EX-06 headset flaunts dazzling sound quality, with the 40mm drivers delivering rich fidelity across the sonic spectrum. Notably, bass frequencies are powerful without being overbearing while trebles remain remarkably crisp. Although the device doesn’t provide true Surround Sound, the headset does offer a faint simulation of the feature at the press of a button. While you won’t be able to distinguish the location of foes or enemy fire, the sound mix does receive a brightening equalization that adds a bit of clarity by boosting the margins of soundscape. During play testing, the EX-06 fared glowingly, articulating the growl of a Lamborghini in Need for Speed: Rivals and transmitting crisp gunfire and hearty detonations during Call of Duty: Ghost’s campaign. With the microphone was inserted into place (nicely there are ports on each side of the peripheral) outgoing chat quality was solid, limited only by the bandwidth offered by Xbox Live or the PlayStation Network. When pitted against the similarly priced Skullcandy PLYR 2, the EX-06 exhibited a comparable sound, microphone quality, and range. 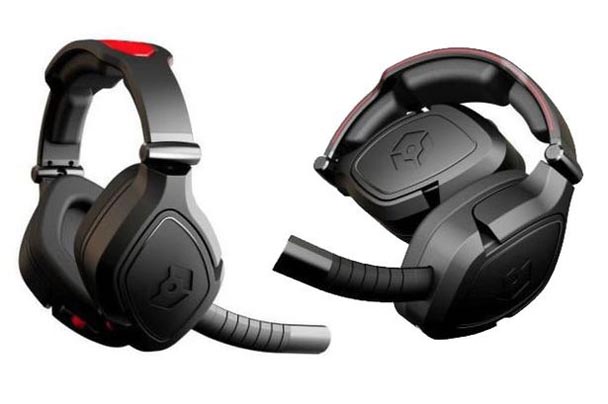 However, when it comes to comfort, the Skullcandys trump Gioteck’s device. While the distinction between cloth and simulated leather ear cups is relatively minor, the pliability of the headband on each unit is another story. The PLYR 2 proved comfortable across marathon play sessions, with an aperture that felt form-fitted. The EX-06s were notably tighter, causing slight pressure around the temples, thereby truncating play times. Although owners with smaller skulls might find Gioteck’s engineering comfortable, if your cranium has a larger circumference that 23 inches/58 centimeters, you might want to try on the EX-06s before committing to a purchase. Of course, the upside of Gioteck’s design is that the tight-fitting phones won’t fall off during movement and the snug ear cups help to thwart outside noise.

For those seeking sonic quality and don’t have a need for wirelessness, the EX-06s also come in a corded model, which excludes many of amenities such as a microphone and on-ear volume control. Available at roughly half the price of the wireless model, the device provides the same virtuous sound output as well as an identical build quality. Both peripherals feature the same foldable design, allowing users to rotate the ear cups and fold in one of the drivers, radically reducing the size of the Gioteck’s footprint. Yet, for those seeking quality output and the smallest form factor, the Koss UR-40 remains the model to beat, especially when it can be procured for as little as $26. 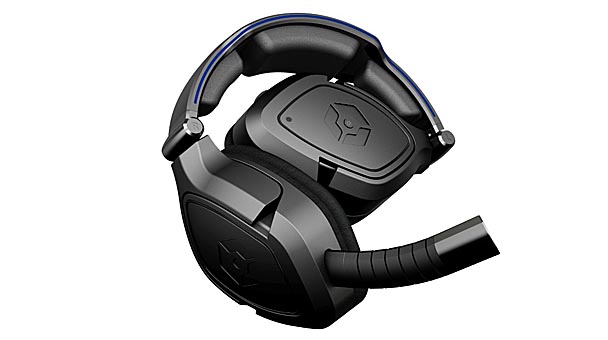 So while Gioteck’s corded headphones can’t quite measure up to competitors, the wireless version of the EX-06 is praiseworthy, supplying brilliant sound and commendable microphone performance for a respectable price. For those seeking portability, the cordless EX-06 is undoubtedly the best in its class, with an operationally equivalent transmitter that’s a fraction the size of rivals. If Gioteck could alter the peripheral’s ergonomics to accommodate larger head sizes, they could easily emerge as the leader in the mid-ranged audio accessory market.

Gioteck EX-06 Foldable Wireless Headset Review
Across the last decade, a deluge of third-party accessory manufacturers have entered the console market, hoping their hardware will induce gamers to open their wallets. The tragic reality: while a growing number of these peripheral are adequate, there&rsquo;s still a large quantity of lackluster devices poised to disappoint players. One unexpected surprise can be found in the Gioteck SC-1 Wireless Sports Controller. Overlook the company&rsquo;s shamelessly suggestive &ldquo;come get some&rdquo; motto and garish color scheme and you&rsquo;ll discover an accessory which fuses the best elements of the DualShock 3 and the Xbox 360 controller into a single, ergonomically-pleasing device. Five&hellip;