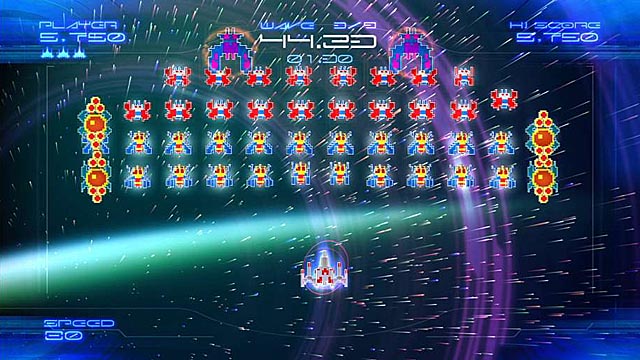 What is the concept? Following in the footsteps of 2010’s Pac-Man Championship Edition DX, Galaga Legions DX offers another reinvigoration of Namco’s beloved bug-shooter. Much like the darling dot-muncher’s last diversion, Galaga‘s intensity has been ratcheted up exponentially, as waves of irritable insects encroach upon players. Although the game still foreshadows the path of these invaders with glowing pathways (as it did in 2008’s Galaga Legions), success no longer depends of the placement of your satellite formation. Instead, the title sticks closer to twin-stick tradition, tasking gamers with maneuvering their vessel  while firing in any direction. The game’s one offensive nuance is toggled with a press of the shoulder buttons- allowing players to switch between a converging stream of firepower, or a wider (albeit weaker) spray of shot.

Would I enjoy the game? If you’re an admirer of sensory-saturating titles which challenge players to earn a stratospheric score, rather than just get to the final credits, Galaga Legions DX is for you. While the screen can become filled with foes and their intermittent missiles, the title never approaches the difficulty found in the most demanding bullet-hell shooter, thanks to your ship’s formidable weaponry. Blasting through swaths of foes is wonderfully sinuous, with the title often sending a surrounding crowd of bugs, tasking players to crave out some breathing room. Additionally, the fifth wave of every level offers the opportunity to retake control of a captured fighter, endowing players with an arsenal which can quickly obliterate a dense wall of antagonists. As such, getting past Legion DX‘s Championship mode and nine collection of stage (each comprised of countless, smaller levels) isn’t particularly challenging, but will demand unmitigated attention if players are hoping to earn a spot on the game’s leaderboards. 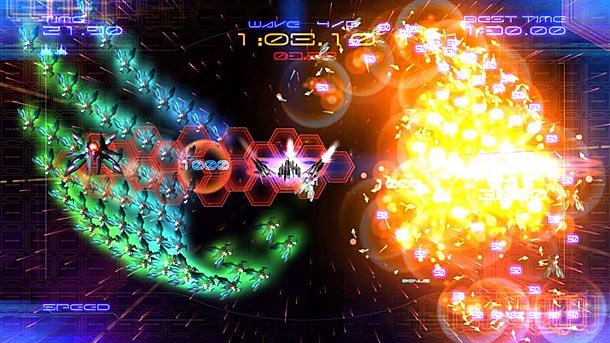 What are the game’s strengths? Borrowing a mechanic from Pac-Man CE DX, the game slows to a purposeful crawl if enemies near your ship, allowing players to move with superhuman dexterity. Additionally, orange-coded Galaga Bombs destroy an entire string of foes when shot, proposing an easier way to clear the screen of opponents, at the trade-off of a reduced score. Both of these elements endow Galaga Legions DX with the type of  intriguing risk/reward gameplay which lures gamers back for repeat play. In keeping with Namco Museum tradition, the game offers a bit of historical context, which is a nice supplement for retro junkies.

What could have been improved? Although each of Legion DX stage’s support a protracted 12-15 minute playtime, an endless mode where gamers could enjoy an uninterrupted expedition would have been appreciated. Considering the title’s vibrantly colored, hyperkinetic visuals and trancey soundtrack, being able to become wholly immersed in the game could have been wonderfully cathartic. Still, it’s a small knock against an otherwise outstanding title. 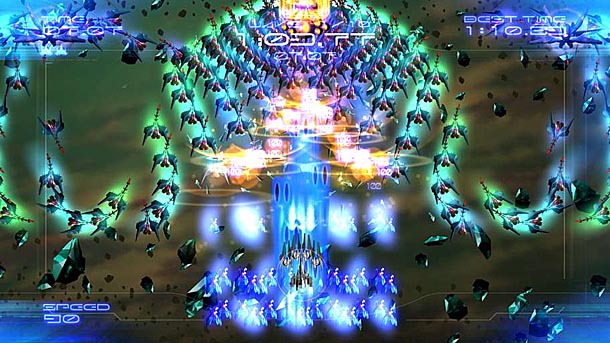 Is it worth the money? Beyond the aforementioned modes, Galaga Legions DX also includes a pleasing collection of skins, which customize the on-screen characters by offering a number of charming, pixelated aesthetics. A few more nominal perks like this, or even additional gameplay variations would have allowed the title to be recommended without reservation. Nevertheless, point chasers could do much worse than vie for supremacy on Legion’s leaderboards since the game’s scoring system allows for a surprisingly deep level of learning. As such, shooter fans are urged to give these insects another whirl.

Previous: Take It To the Bowl- NCAA Football 12 Interview
Next: New Releases for the Week of July 10th, 2011