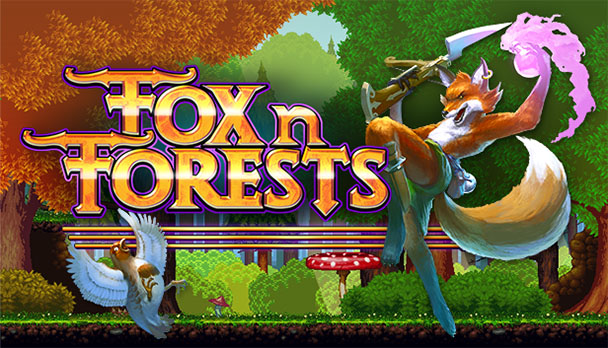 Some refer to the sixteen-bit era as the golden age of platformers. While it might have been a prolific time for the genre, the Super Nintendo and Sega Genesis were also inundated with a number of undistinguished efforts like Aero the Acrobat, Alfred Chicken, Mr. Nutz, Rocky Rodent, and Zero the Kamikaze Squirrel. In hindsight, each anthropomorphic protagonist had most of the basics down, allowing for leaps across countless chasms and the ability to confront the foes who loitered on floating footpaths. Yet, something was missing from the final product, prohibiting each title from earning a place in the platforming pantheon.

But most of these second-string efforts weren’t completely devoid of merit, earning the appreciation of devoted collectors. And if you are a part of that consistency, you might take interest in the release of Bonus Level Entertainment’s Fox n Forests. With dispensable dialog, pixelated visuals, and an ample amount of asset recycling, the game could have easily pass for an overlooked entry from the early nineties. Shirking the modernizations that elevated a game like OwlBoy, many might experience a bit of fatigue before reaching the game’s fourth and final world. 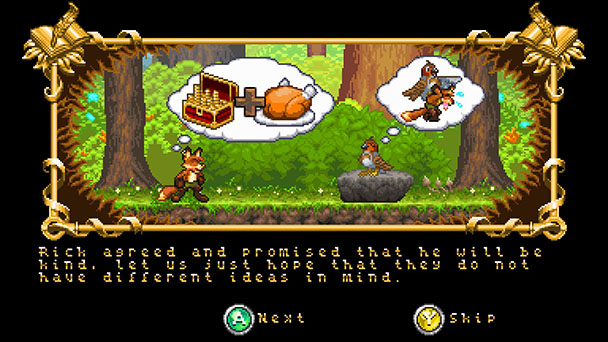 The game puts players in control of Rick Fox, not the former basketball player and current owner of an eSports team, but a bipedal mammal who shows come carnivorous desires. The game’s opening cutscene reveals his plans to eat a helpless partridge named Patty, who cons Rick into pursuing treasure instead of eating her for dinner. More cunning than the fox, the bird duplicitously gets Rick to assist the Season Tree regain four pieces of its magic bark. In return, the friendly flora gives the fox a wooden crossbow as well as the ability to change seasons. Between the game’s difficult to read font and text that seems awkwardly translated, the interchanges are mercifully brief and are generally uninspired.

Another disappoint stems from Rick’s promising arsenal. You’re given a melee weapon, long-range bow, and double jumping as well as the ability to squat down. But these capabilities seem out of place when you head into the first stage. You’ll learn that you can only shoot an arrow then you are standing motionless, and use your other weapon when making a single leap. As such, eliminating airborne enemies can feel like a chore. Other times you’ll seemingly have a direct line of sight with a foe and fire your crossbow, but the arrow get destroyed on an elevated piece of land. 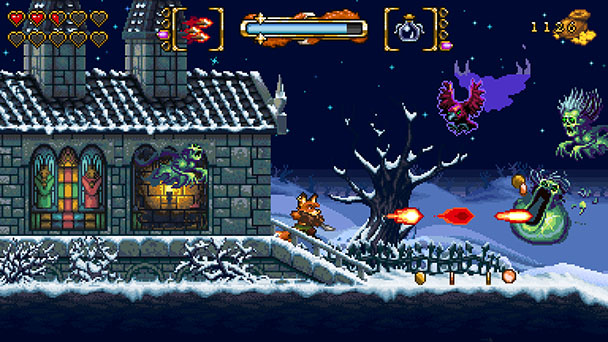 Sure, you can spend money to upgrade your abilities, purchasing things like at attack when double jumping or a downward attack when leaping, but Rick’s agility arrives too slowly. Adding to the issue is that your initial loadout is underpowered; it will take six cross bow shots to down a walking tree and three or four to eradicate an unassuming frog. Later, you’ll purchase potions and different types of arrows but none of these excuse Fox n Forests early stages from being overly monotonous.

One aspect that does endow Fox n Forests with distinction is the capacity to change seasons. A button press toggles the time of year, freezing waterfalls or triggering a cascade of falling leaves for Rick to scamper up. While this endow the game with light puzzling elements, it’s almost always evident when to trigger a seasonal change, undermining the mechanic. Another nod to the sixteen-bit era is found in a pair of side-scrolling levels, that are a bit too long, but help offset fatigue. 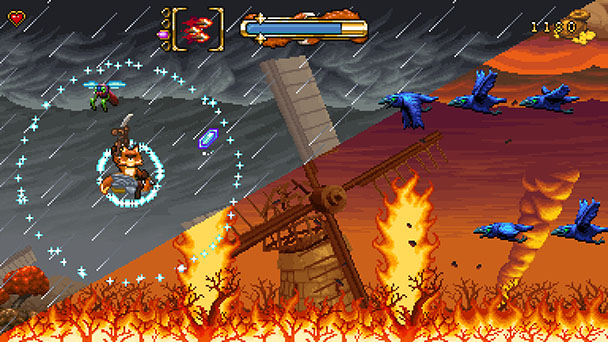 Undoubtedly, tedium will set in during Fox n Forests’ excessively long levels. Since defeated foes reward players with a coin or two, it’s natural to try to eradicate every enemy you see. But doing so stretches the stage out far too long, making the journey to the end of level seem like a slog. No, it’s best to scurry through each stage, avoiding confrontation if you don’t want to grow bored since backtracking for magic seeds becomes necessary for opening up new levels. Tile sets are limited, so stages recycle environmental objects frequently.

By the end of game, Rick’s ability set is augmented, making the replay of stages a bit less wearisome. But for many it will be a concession that arrives too late, and you’ll likely wish the fox was this formidable earlier, when you could have enjoyed the upgrade. Undoubtedly, it’s tough for developers to balance a sense of progression with the gratification of using a fully-realized ability set, but Bonus Level errs on delayed postponement. It’s not the most grievous mistake out there, but it does diminish the sense of fun. Much like Awesome Possum or even Rolo to the Rescue, Fox n Forests attempts to reinvigorate the character-driven two-dimensional platformer. But a few too many missteps prohibit the journey from being memorable. 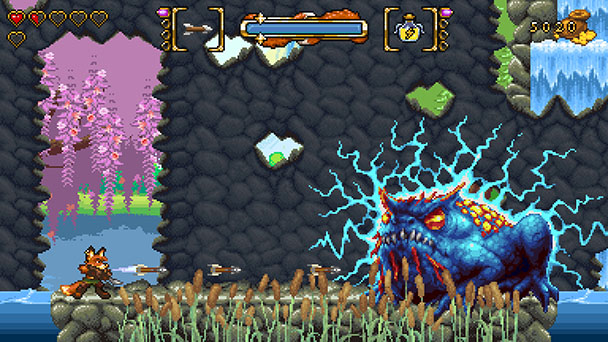 Fox n Forests was played on PC with review code provided by the publisher.

Fox n Forests
Platform: PC, PlayStation 4, Xbox One, Switch
Developer: Bonus Level Entertainment
Publisher: EuroVideo Medien
Release date: May 17th, 2018
Price: $19.99 via digital download
Fox n Forests review
Some refer to the sixteen-bit era as the golden age of platformers. While it might have been a prolific time for the genre, the Super Nintendo and Sega Genesis were also inundated with a number of undistinguished efforts like Aero the Acrobat, Alfred Chicken, Mr. Nutz, Rocky Rodent, and Zero the Kamikaze Squirrel. In hindsight, each anthropomorphic protagonist had most of the basics down, allowing for leaps across countless chasms and the ability to confront the foes who loitered on floating footpaths. Yet, something was missing from the final product, prohibiting each title from earning a place in the platforming&hellip;

Summary : When I first saw Fox n Forests screenshots, I was excited by the possibility of sixteen-bit platforming revival. But by the fourth stage, my enthusiasm had waned, with Bonus Level Entertainment capturing little of the charm of charm exhibited by the genre’s best efforts.