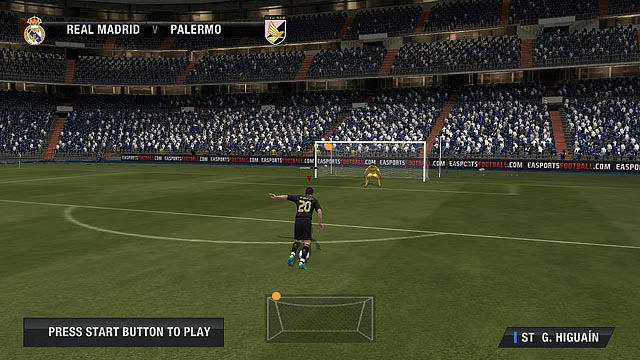 Despite the presence of Rooney, Donovan and Márquez on the cover, don’t assume FIFA Soccer for the Vita to be a faultless clone of the most recent console version. Forgoing an annual designator, the adaptation lacks several of the additions which made the Xbox 360 and PlayStation 3 versions of FIFA Soccer 12 such a dazzling simulation of the sport. Yet, even with these omissions, the title remains a portable prodigy- allowing the series’ core gameplay and elaborate visuals to be enjoyed on the go.

Shrewdly, the gracefulness of the game has miraculously been kept intact, with the franchise’s intuitive passing, tackling, and shooting mirroring the mechanics of last year’s console iteration. Although the team rosters default to the commencement of the 2011/2012 season, players can obtain the latest inventory of transfers through the title’s menu system. Impressively, FIFA Soccer’s user interface echoes its home-based brethren, exhibiting perks like tickertape scores of real-world matches and the franchise’s signature shootouts as the main competition loads. 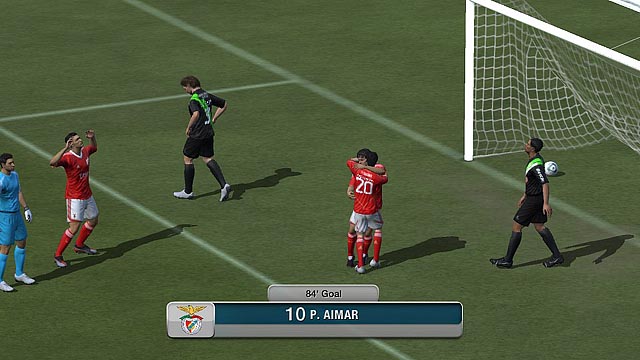 On the pitch, fervent footie fans are forced to forgo FIFA 12’s Tactical Defending. This addition elevated contests for possession, requiring players to methodically immobilize an offensive player’s progress, instead of reducing defense to a track and tackle mentality. Likewise, the absence of the Impact Engine means that the variable player collisions which endowed FIFA 12 with an organic ambiance are gone. Fortunately, dribbling fares far better with ostentatious moves such as heel chops and triple elasticos available through a bit of right stick wrangling. Despite the previously mentioned omissions, the nuances of the FIFA franchise still permeate through the Vita version- flaunting convincing player AI, credible ball physics, and stadiums brimming with luxurious detail.

Unique to this version are control methods which take advantage of the system’s touch capabilities. Players can tap the front screen to pass the ball to a teammate, with the duration of contact determining the velocity of the kick. Cleverly, the back of the Vita allows for increased precision when shooting. Once an athlete approaches the boundaries of the pitch, the back of the system replicates the mouth of a goal, allowing players to shoot with pinpoint accuracy. While this technique is undeniably useful, especially in shootouts, it may require players to modify how they hold their Vita. Mercifully, an on-screen indicator gently reminds gamers of any errant contact with the rear touchpad. 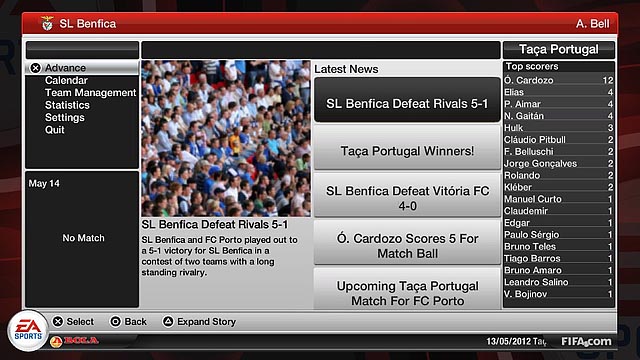 With the exception of the card-collecting time sink known as Ultimate Team, a majority of FIFA’s familiar modes have made the jump onto the OLED screen. The title’s career campaigns allow players to step into the cleats of a player (and player manager) or even the posh oxfords of a manager- taking control of the team’s head-office obligations. FIFA Soccer’s match selections are pleasing diverse, allowing for over fifty different preset tournaments as well as the creation of custom competitions both on- and offline. Happily, most online matches were habitually free of any dehabilitating lag, exhibiting only an intermittent hiccup or two.

Graphically, FIFA Soccer manages to capture much of the bravado of the console version, flaunting well rendered player models which animate convincingly. Although the occasional framerate drop is evident when squads take the pitch, matches are typically free of any visual impediments and looking stunning on the Vita’s screen. Sonically, Martin Tyler and Alan Smith’s commentary is spontaneous and natural as ever, while the game’s truncated selection of musical tracks features some keen selections. 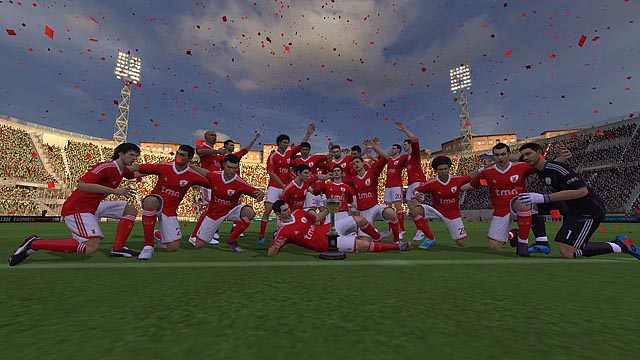 As a testament to the power and capability of the Sony Vita, FIFA Soccer is a near-perfect showpiece. Boasting mechanics culled from previous FIFA iterations, EA has managed to shoehorn its soccer simulation into portable form, sacrificing only a handful of elements in the adaptation. As long as players are willing to relinquish a few of the innovation which made FIFA Soccer 12 so superlative, they’ll find the title to be the best handheld interpretation of the sport ever created. Hopefully, EA’s can mend the game’s minor transgressions, and give us a sequel which gives players the same feature-set found in the console version.