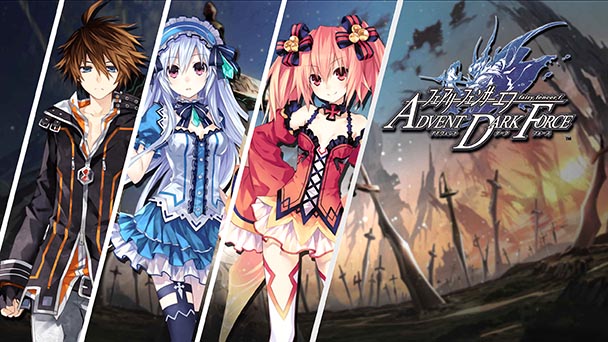 An Exceedingly Familiar Fairy and Fencer

With remakes, remasters, and ports comprise a significant portion of the game industry’s output, it’s natural to be a bit skeptical of the whole practice. Although a number of these reiterations are born from genuine fan request, just as many seem quickly crafted to pad the company coffers. And given that it’s the fourth platform to receive a port, it’s natural to be a bit cynical about appearance of Fairy Fencer F: Advent Dark Force on the Switch.

But given the game’s pedigree, boosting collaboration between Neptunia’s Tsunako, a screenplay written by Ranma ½ and Death Note writer Toshiki Inoue and music from frequent Final Fantasy contributor Nobuo Uematsu, Fencer remains one of the better role-playing collaborations of the last half-decade. Those who already journeyed through the original game any of the previously released iterations of Advent Dark Force might not be up for saving the world again, but Switch owners who haven’t played this definitive edition will likely want to free some time from their schedule, especially if Idea Factory can clean up some of the issues that sully this adaptation. 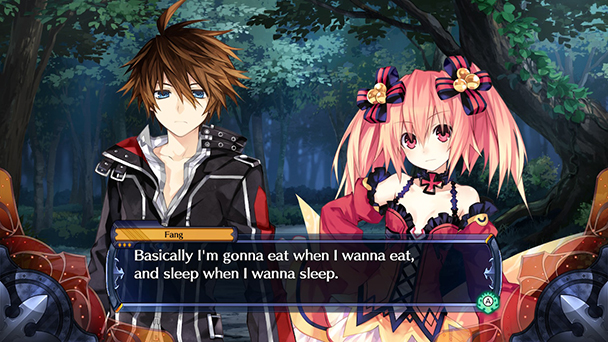 A Reluctant Hero and a Quarreling Pair

Pleasingly, Fairy Fencer F’s plotline doesn’t provide the prototypical plucky protagonist. Instead players adopt control of Fang, Fang, a lazy and stubborn young man who’s motivated more by hunger than actually helping humanity. An introductory cinematic sequence depicts a confrontation of a ‘Vile God’ and a Goddess, with the conflict ending in a stalemate as each deity becomes immobilized by the other’s barrage of swords. While many of the blades bound each spirit, a number of them missed their mark and landed in the human realm.

Fang discovers one of these swords, that are called Furies, lodged Excalibur-style and he’s encouraged to free the blade with the purported promise of free food. But once the weapon is removed, he’s greeted by a fairy named Eryn, who not only enlists the indolent character into reclaiming the remaining Furies, but challenges Fang’s apathetic attitude. Fairy Fencer F’s lore unites fencers with a single fairy, providing the basis for plenty of spirited banter and a metaphorical exploration of the challenges associated with commitment and monogamy. But before things become a bit more serious (and a bit more cooperative) in the second half of the title, there are plenty of opportunities for good-natured bickering. 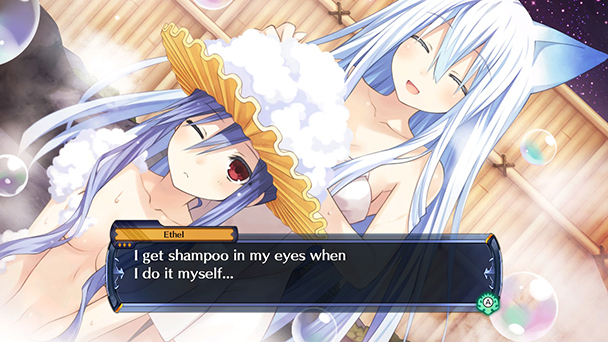 A Cast of Misfits Who Grow in Likability

Being a Compile Heart game, there are a number of instances of light lasciviousness, but overall Fairy Fencer F feels bit less impish than some of the developers’ more lascivious efforts. Instead, enjoyment stems from the developer’s comical interpretation of the reluctant hero and a willingness to introduce a largely disagreeable cast. Expectantly, motivations shift, a tsundere lessens her iciness, and at least one remarkably poignant plot point happens before the final credits roll, granting a number of gratifying character arcs. Plus, it’s hard to have an aversion to a character that can equipped with a piece of burnt toast in his mouth. Another positive element to the game approach can be found in the succinctness of dialog. Seldom does Fairy Fencer F dawdle at the precipice of pontification. Quite often, sub-events are completed in less than a minute or two.

With Fairy Fencer F’s puckish dialog recalling some of Compile’s other efforts, it’s not surprising to find that combat draws on Hyperdimension Neptunia’s fundamentals. Seizing initiative with the foes that skulk through each dungeon stage is accomplished with a well-timed button press. However, flub the opportunity and you’ll transfer the advantage to your opponent. While Fencer’s encounters are inherently turn-based, they nearly feel like an action title, with party members quickly determining positions in a large circle before using commands to execute combos, utilize consumables, or initiate supers that produce fluid, anime-style cutscenes. One contenting change from the original release the adjustment to the size of your battle party. Advent Dark Force permits a sextet to tackle adversaries. 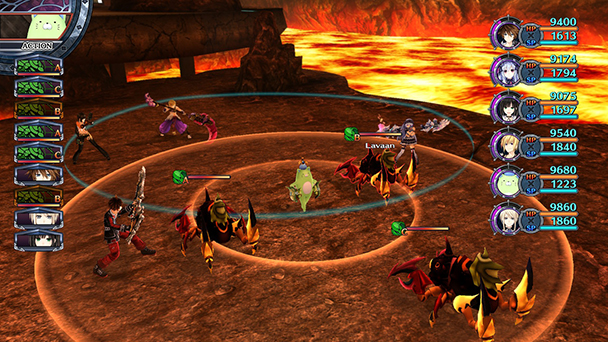 Mirroring Neptunia’s HDD transformations, Fencers can bond with their weapons once a tension gauge has reached a preset threshold. Known as the “Fairize” ability, the mode kicks off with a seppuku-like sequence, where fencers impale themselves with their weapon, before transforming into a new, more formidable form. Once commenced, attacks dispense an increased amount of damage, while special commands have the possibility of obliterating opponents, if players are willing to gamble a decisive amount of their special points and health. In execution, Fairizing mollifies most of the frustration common to boss encounters. That said, Fencer still exhibits the sporadic difficulty spike, which can cause some vexation. Those opposed to grinding will appreciate the general level of difficulty. But players indoctrinated to power-leveling might find Fairy Fencer F’s campaign a bit too straightforward, especially on the easiest two difficulties. Like previous releases of Advent Dark Force, there are now two additional levels of challenge.

That isn’t the only change for those who played the original iteration. Veterans who re-enter the game’s first dungeon might be taken pack by the integration of simple puzzles. While they boil down to key and gate obstructions, the modification helps to invigorate the rather austere hallways of the original games. Beyond the sporadic new cutscene, Advent Dark Force augments the binary conclusions of the original game, with a storyline that splits into three distinct paths. Saying anything more would be venturing into spoiler territory but suffice to say there are some radical shifts to the new branching plot as well as a healthy amount of new content. One word of warning to returning Fencers- you might want to research the narrative junction, as it easy to miss the intersection completely. 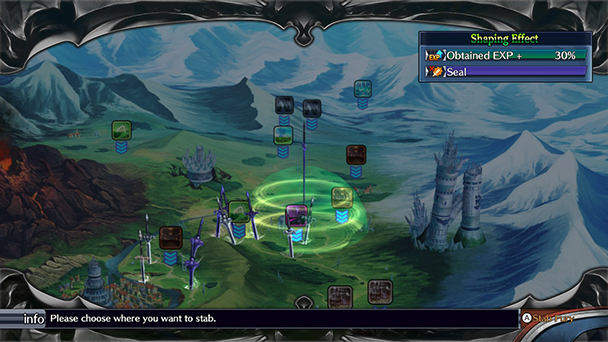 Back at the Town Hub Menu

When parties aren’t combing dungeons or battling the game’s bestiary of baddies, there’s plenty of opportunities for self-improvement. Although Fairy Fencer F eschews urban exploration in favor of menu-driven interaction with townsfolk, the design decision mirrors the efforts to quicken combat, allowing the game to feel quite brisk. From pursuing undertakings offered by the local barkeep to pouring weapon points in depositories that issue new combat abilities, specials, as well as bolster your basic stats, Fencer gives players a large amount of flexibility.

Beyond fundamental augmentation, the plot also hinges around the collection of Furies. Periodically, new areas are opened, allowing parties to challenge antagonists for rights to the relic. Once uprooted, the spirit fairy inside can be used to remove one of the swords which restrains the Vile God and Goddess resulting in yet another skirmish. But the possible benefit here is large- with players able to earn perks or place stat-altering fairies at dungeon entrances, potentially adjusting the stage’s risk/reward ratio. 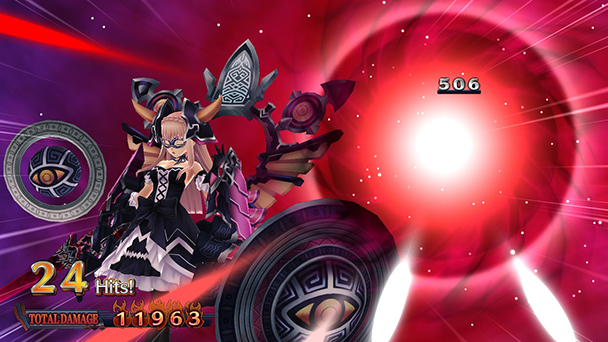 Aesthetically, Fairy Fencer F reveals Compile Heart’s distinctive dissonance between dimensions. Tsunako’s (Hyperdimension Neptunia series, Date A Live Twin Edition: Rio Reincarnation) character portraits are astounding, both sumptuous drawn and eerily lifelike as they express emotions. But when the designs are translated into 3D, Advent Dark Force still can’t quite match its own two-directional beauty. While Idea Factory promised a day-one patch to smooth things over, combat is notably framey, and the game’s colors can sporadically become too dark. Oddly, the game’s battle animations are unaffected and appear astoundingly fluid.

Sonically, Nobuo Uematsu’s compositions are nothing short of splendid, offering a multiplicity of motifs which draw from global influences. Just as proficient is the game’s henshin anthem, which blares energetically when players adopt the Fairize form. Like most Idea Factory International releases, voice overs are presented in dual audio, with the English cast doing a surprisingly adept job at nailing the nuances of delivery. But unless you loathe subtitles, the Japanese voiceover is the way to play. 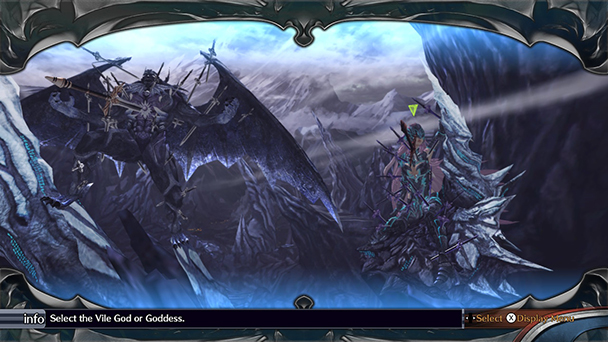 As with any capable revision, Fairy Fencer F: Advent Dark Force establishes itself as the definitive iteration. Although the game wasn’t given a comprehensive overall, the inclusion of a wealth of DLC makes for an alluring incentive. While the title isn’t of one of the Switch’s top JRPGs, it’s definitely worth of consideration by genre fans, especially if Ghostlight Interactive can mend a few blemishes.

Fairy Fencer F: Advent Dark Force was played on the
Switch with review code provided by the publisher.

Fairy Fencer F: Advent Dark Force (Switch) review
An Exceedingly Familiar Fairy and Fencer With remakes, remasters, and ports comprise a significant portion of the game industry&rsquo;s output, it&rsquo;s natural to be a bit skeptical of the whole practice. Although a number of these reiterations are born from genuine fan request, just as many seem quickly crafted to pad the company coffers. And given that it&rsquo;s the fourth platform to receive a port, it&rsquo;s natural to be a bit cynical about appearance of Fairy Fencer F: Advent Dark Force on the Switch. But given the game&rsquo;s pedigree, boosting collaboration between Neptunia&rsquo;s Tsunako, a screenplay written by Ranma &frac12;&hellip;

Summary : While a few visual imperfection mar the title's launch, Fairy Fencer F: Advent Dark Force arrives on Switch in solid fashion. Luckily, the incorporation of ample amount of DLC and a launch price discount help to offset the blemishes.