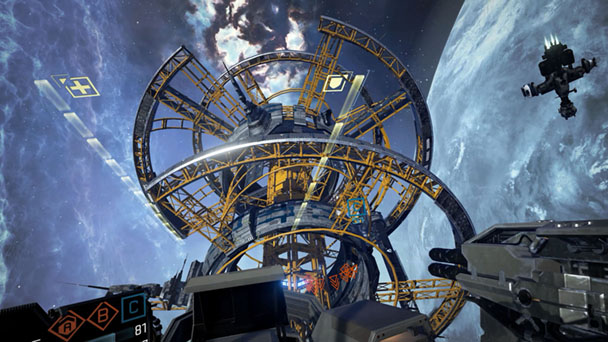 Why do multiplayer-only games catch flak? They do because of grumps like me. Don’t get me wrong. I can love a unique multiplayer experience (the Splinter Cell series’ Mercs vs. Spies modes were incredible), but nothing compares to a finely crafted single-player mode. Many multiplayer games inevitably fall prey to imbalanced matchmaking, lag, cheating, abusive players, and the unrealistic player behavior that comes from a lack of any actual possible harm (not that actual harm would be good!) EVE: Valkyrie is a multiplayer-focused game that leaves me craving the depth of a single-player game, but it still has something to offer.

EVE: Valkyrie is a VR-only game for Vive, Rift, OSVR, and PSVR with gamepad controls to be played while seated. HOTAS is supported even on PSVR which is nice. EVE: Valkyrie is a spinoff of the notorious EVE Online, a massively online space sim that has seen its share of the kind of drama that would give any social psychologist (or economist) nightmares. Despite that, EVE: Valkyrie is surprisingly low on depth. It’s effectively a Call of Duty-esque experience. Sure, CoD arguably has a kind of depth, but in the end, it really comes down to how good you are at shooting dudes in the face. 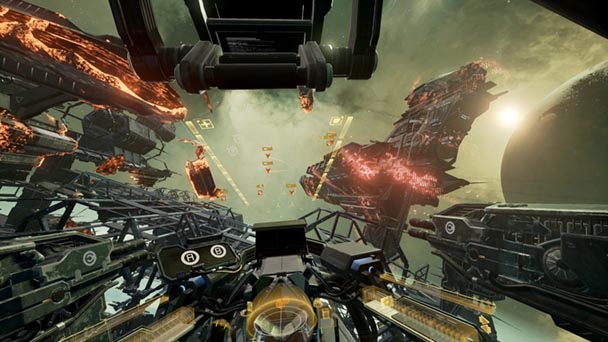 You start off in EVE: Valkyrie playing through a few short single-player missions that manage to be atmospheric and interesting. Sadly, they mostly end up serving the purpose of teaching you to pilot your ship and to do the simple (though challenging) tasks the multiplayer will ask you to do. The game offers a bit more single-player content in the form of a combat-free mode where you explore small areas and listen to storyline audio, and a wave-based survival mode. There doesn’t seem to be any sign of more to come.

Ok, Tide, but how does it rate as a multiplayer game? Pretty good, actually. I didn’t notice any obvious lag, cheating, or unrealistic player behavior. While combat can often turn into a circling swarm, there were times when I actually felt cool and tactical: launching countermeasures, swooping through debris to lose a tail, quickly slowing down to drop back, and physically turning my head to put my missile reticule on my enemy. I really like that the missile reticule is tied to where you’re looking. It takes some getting used to, but it’s a great use of head tracking. 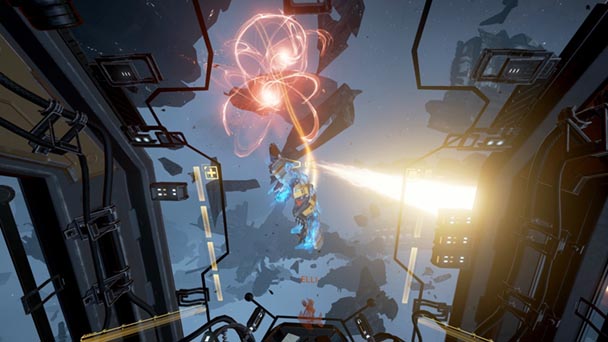 My first time playing, my enthusiasm for the game dropped a bit when I eventually realized I was playing entirely against bots. It was my mistake for playing late at night during the week. I don’t mind playing bots, but it should be more obvious. The next time I played, it was evening on the weekend. There were more players, but also still a lot of bots filling spaces.

There are three main multiplayer modes: control (capturing points), team deathmatch, and carrier assault (capturing points to then attack the enemy carrier), but there’s an obvious lack of variety. A recent update added “wormholes” that change the game’s maps in interesting ways, but their only being active on the weekend is a bit of a bummer. There’s also a cooperative players vs. AI mode. 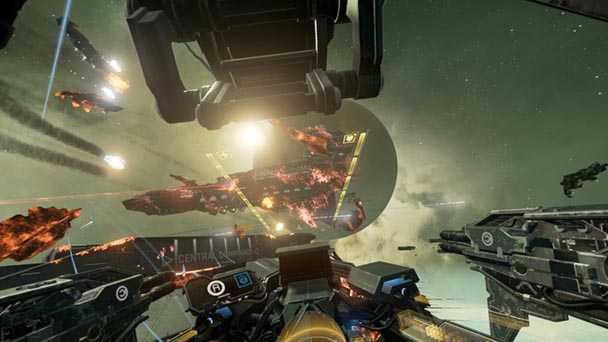 Like CoD, EVE: Valkyrie has you gaining XP and leveling up. New players will pretty quickly unlock one of each of the three types of ships: fighter, support, and heavy. Different ships have different loadouts and abilities, which is refreshing, but I didn’t come across anything too dramatically different. You can also unlock purchasable ship upgrades that are functional or cosmetic. Your pilot can be fitted with different helmets and suits, but they seem entirely cosmetic. As far as I can tell, they’re pretty much only visible before matches, so having some cool perks attached would have made me more likely to buy.

The keyword there is “buy”. The game is $59.99 USD when fully priced, yet it offers (not-so-) microtransactions such as XP boosts. Yes, you can unlock goodies and earn currencies as you go with your base-game install, but for $59.99 USD, the game should be a premium experience totally free of pay-to-win. If this is the new standard, I don’t like it, but at least it wasn’t obtrusive to the game experience. 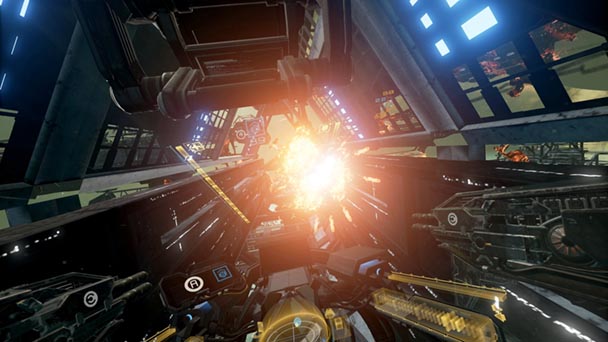 After a lack of single player, my biggest complaint with EVE: Valkyrie is its horrendous interface. Some menu options are selected by the analog stick, some are selected by looking at them, and some options are invisible until you look in the right place. Match that with menu nesting that requires memorization over common sense, and newbies like me are bound to be confused and frustrated. On my first time playing, the game forced me into gameplay before I was allowed to adjust my graphics settings. It gave me an ugly first impression of what is actually a nice-looking game.

I’ve touched on a lot of negatives, but at its core, EVE: Valkyrie is a good game. At $59.99 USD it’s majorly overpriced, but if you fall into the cozy overlap in the Venn diagram of fans of CoD-style multiplayer and fans of space combat, it’s worth grabbing on sale.

EVE: Valkyrie was played on the PC with review code provided by the publisher.

EVE: Valkyrie
Platform:
PC with HTC Vive or Oculus Rift, PlayStaion 4 with PSVR
Developer: CCP
Publisher: CCP
Release date: November 17th, 2016
Price: $59.99 via Steam (PC), $59.99 via PSN (PS4)
EVE: Valkyrie review
Why do multiplayer-only games catch flak? They do because of grumps like me. Don&rsquo;t get me wrong. I can love a unique multiplayer experience (the Splinter Cell series&rsquo; Mercs vs. Spies modes were incredible), but nothing compares to a finely crafted single-player mode. Many multiplayer games inevitably fall prey to imbalanced matchmaking, lag, cheating, abusive players, and the unrealistic player behavior that comes from a lack of any actual possible harm (not that actual harm would be good!) EVE: Valkyrie is a multiplayer-focused game that leaves me craving the depth of a single-player game, but it still has something to&hellip;

Summary : Sure, there's a scarcity of single-player content, the UI can be problematic, and the specter of dubious micro-transactions. But if you can look past these issues, EVE: Valkyrie offers a competent arena for combative space pilots.