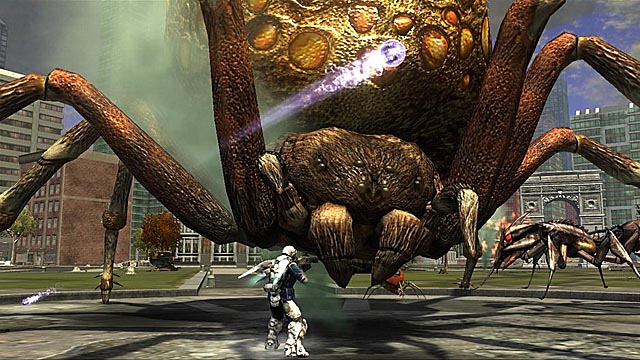 I’ll be the first to admit it; when I’m wrong, I’m wrong. Earth Defense Force: Insect Armageddon did not impress me when I first saw it at E3; I thought it was overly simplistic in both controls and plot, and the lack of complexity left me yawning. You may recall DesertEagle reviewed the 360 version midway through 2011, and he tried to impress upon me that it wasn’t the bore-fest I believed it to be.  Having now played the PC version, I have to agree that I was mistaken. You play the hero in a Starship Troopers-esque squad and you mow down bugs, robots, and robot bugs as they threaten the city and screaming citizens. The game delivers satisfying explosions of insect guts and amusing dialogue from your fellow soldiers and operatives commander. Add in good graphics and an environment which is destroyable as well as pretty and you’ve got a decently enjoyable game on your hands.

My original opinion about the plot and gameplay remains unchanged; it is very simple. Your character is the top solider in a unit whose mission is to destroy all the bugs attacking the planet.  The bugs start out as oversized, otherwise-normal versions of real bugs, but as the game progresses you also encounter a variety of spaceships and robot bugs. These creatures do their best to add a little variety to the game, but their weaknesses are all the same; shoot them a lot and they’ll die. The initial novelty wears off quickly and they become just another target.   As for your character loadout, you can choose one of four different classes, and each has its own special movement abilities and weapons to use. The classes level up as you use them, allowing for further unlockable specialized weapons and gear. While playing around with all of the different weapons IS cool, the game play itself doesn’t do much to challenge the user.  The game play provides increasing difficulty in the form of more and more bad guys crawling out of the wood work… literally. And while it does introduce new and different baddies to beat throughout the game, they basically all amount to the same—more targets to hit. 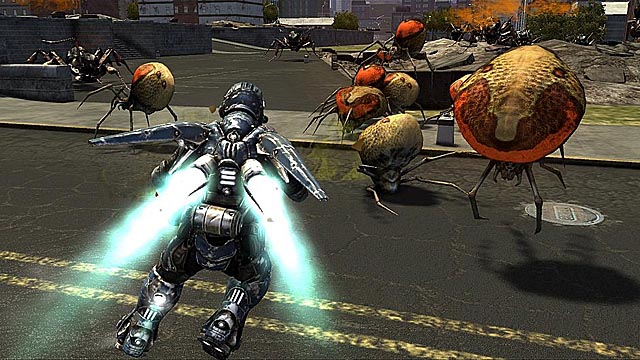 However, minding simplicity aside, EDF:IA does a number of things very well. Nothing about EDF feels clumsy. The controls are user-friendly, and on the PC they match up with your standard WASD controls, so they’re typical to the third person shooter genre. The dialogue is a page right out of Heinlein’s book (that’s Starship Troopers), but it never feels overly cheesy or tedious.  Even the computer-voiced female operative feeding you intel and instructions is more often worthy of a chuckle than a groan, and the AI does occasionally acknowledge the ludicrousness of the situation. All in all, the dialogue adds to the mood of the game, as does the music. The music suits the mood of the fights and doesn’t overpower or distract from the gameplay

The graphics are also very appealing. As I mentioned, the environments are pretty. But its more than that, they also have that visceral quality that comes from attention to detail. The buildings have texture to them, like mottled bricks or windows reflecting the clouds—which makes it that much more satisfying when they blow up and rain pieces down around you. The bugs have nice detail too; hair, spikey bits, shiny exoskeletons, and it makes turning around to discover a giant bug on your six that much more scary if you have any real life predispositions against certain bugs…such as spiders….creepy, creepy spiders….ugh. It’s not just the bugs that draw the eye. The Jet armor is probably my favorite.  As the name implies, it imparts to the user the ability of flight. The tactical armor comes in second for me, as it gives the user the ability to set up turrets. 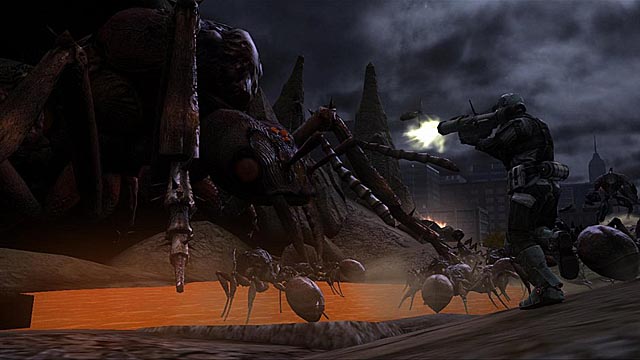 There are still a few things left to be desired. One is the class system. On the whole, the difference classes are cool, but they aren’t very well balanced.   They have their different types of special moves and abilities, and the weapon spread is pretty good all across the board. The Jet armor, as an example, allows you to fly, and while your flight is a bit short lived, the combo of flight with a wide spread rocket launching weapon allows you to rain down destruction from above, whereas the Tactical armor allows you to set up turrets as ground defense. However, the Jet armor is almost as powerful as the Heavy armor, depending on your weapon loadout choice, but more agile and with the ability to fly, which doesn’t leave you with much incentive to change classes to the more cumbersome heavy armor.  The game tries to make up for this through drops from the tougher baddies which hold special weapons that are class specific, so that if you want to see a certain gun in action, you’ll need to switch classes. This does provide some incentive to switch it up occasionally, but since the overall point is shoot as many things as effectively as possible, you’re more likely to find a combo that works and stick with that.

Sure, it’s simple- your objectives are always going to be one of only three types, and  it’s not the most ingenuitive game. However, at the price point (currently $15 on the PC as compared to the $40 price when the 360 version came out), this game is definitely worth a check out if you enjoy third person shooters, a plethora of varied weapons and mechs, or if you just want to stomp a whole lot of bugs without feeling bad about it. 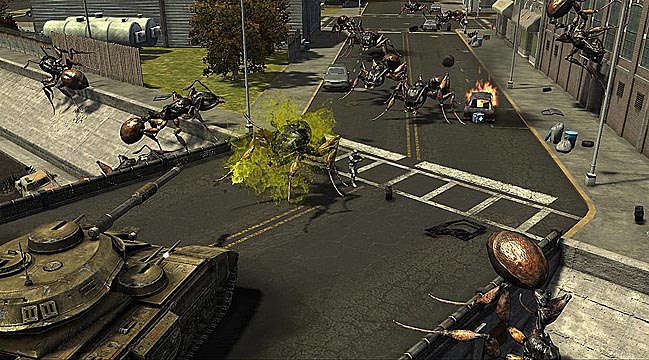 A copy of Earth Defense Force: Insect Armageddon was provided by the publisher for review.