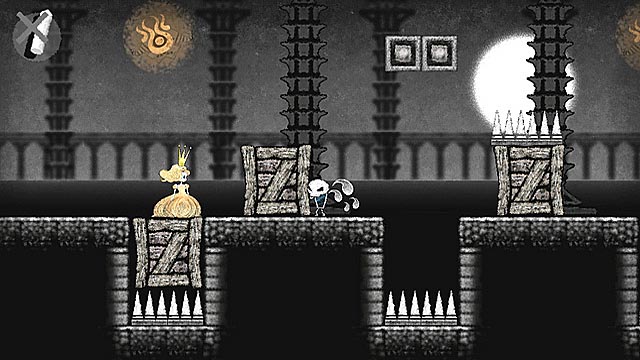 Although the term katabasis may not be in every player’s lexicon, they’re likely well acquainted with the concept. Used to describe the motivation for a hero’s decent into the underworld and the subsequent return to the mortal realm, it’s the ultimate measure of a character’s fortitude. From the literal voyage of the protagonists in God of War and Dante’s Inferno to the figurative plunge taken by the Delta Recon Team in Spec Ops: The Line, katabasis transcends time and culture.

Initially, Dokuro’s impetus seems unexceptional. Game Art’s recent PS Vita release tasks the game’s stalwart skeleton with rescuing a princess- a premise that should be familiar to anyone who has played an entry in The Legend of Zelda or Super Mario Bros. franchises. Yet, where Link and Mario are motivated by romantic reunion, the eponymous protagonist of Dokuro is driven by dogged dedication, since the monarch is mostly unaware of the hero’s existence. This simple unrequited tenor along with a captivating chalk-art aesthetic, endows the puzzle-platformer with a considerable amount of charm. 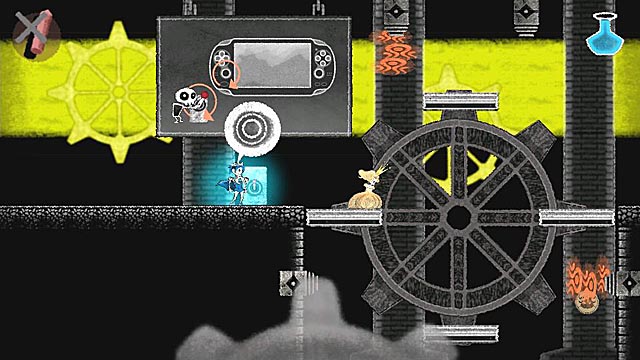 The game’s collection of 150 stages commences modestly, introducing players to Dokuro’s ability to perform a markedly floaty double jump as well as push and pull crates. Later, additional abilities are surrendered, such as the ability for the skeletal savior to momentarily transform into a strapping prince. Here, Dokuro’s ability to jump is constricted in exchange for being able to carry the persistently prone princess. Mercifully, the hero has the ability to assail the game’s array of antagonists; beating back foes with a bone in skeleton form or using a might rapier when transformed into human royalty. Beyond the game’s puzzle-driven stages, boss encounters produce a pleasing change of pace, obliging players to ascertain their attack patterns.

Complementing the arsenal of switch toggling, box manipulation, and environmental navigation are Dokuro’s drawing powers. Using the Vita’s touchscreen, players can connect adjoin items with white chalk, create fuses with red chalk, and even summon water. While these systems permit the game to create some interesting conundrums, the execution of these powers leaves a bit to be desired. One example: an early puzzle requires players to connect a rock to a fulcrum, so the boulder can crash through a prohibiting wall. Woefully, Dokuro requires steady-fingered precision to unite the two objects and is bound to vex gamers with bulky digits. 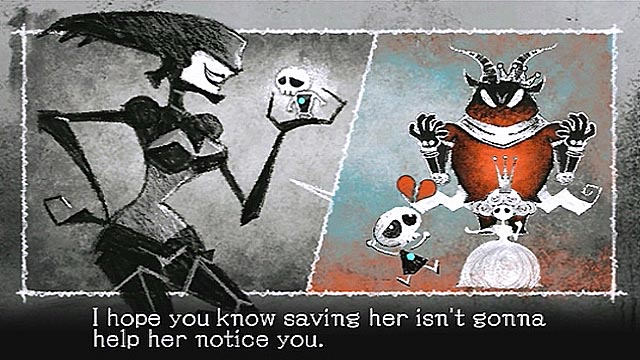 Another aggravating factor is the princess’ lacking and uneven AI. Often ignorant to obvious danger, the aristocrat will frequently saunter into spikes, enemies, or stroll right off edges. Since the maiden’s demise triggers a stage restart (Dokuro lacks level checkpoints), babysitting the princess while manipulating environmental elements often feels like maddening exercise in multitasking. To complicate things, she’s also a bit erratic. The princess with sporadically recoil from threats or stop on a ledge often enough to permit a modicum of trust on the subsequent level. Diligent Dokuro players will know to not fall for this seductive ruse.

As players preserve, the title’s stages become exponentially more challenging, requiring a procession of procedures that are perfectly executed. Often the smallest miscalculation will result in failure, prompting trial and error progression rather than analytical play. While Dokuro’s learning curve is compassionately muted and the game allows up to ten levels to be skipped (completing eschewed stages even reopens slots) frustration is bound to ensue during the game’s duration. As such, PS Vita owners that are easily exasperated may want to sidestep Dokuro’s virtues. More patient players will find that the title offers a both a wealth of content and one of the more appealing leads in a portable title. At the game’s current twenty dollar MSRP (available exclusively on the PlayStation Store), puzzle fans may want to take the plunge. 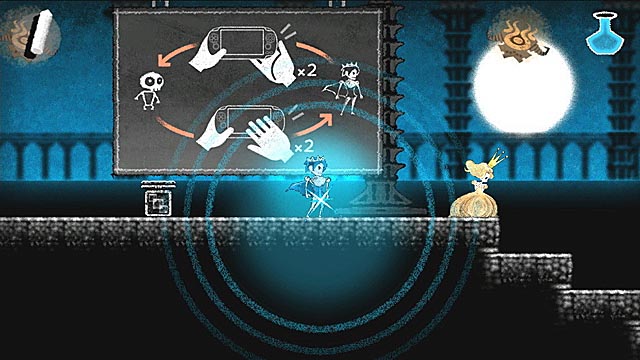