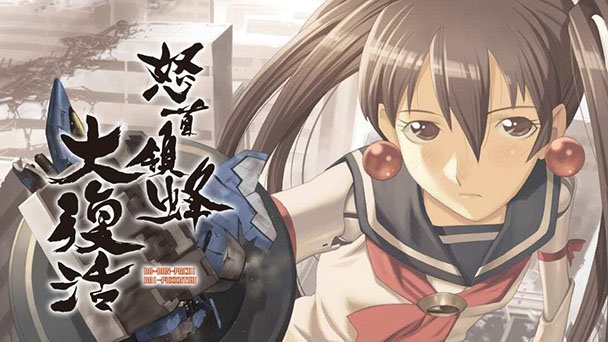 Heralded as one of the genre’s best efforts, DoDonPachi arrives on Switch with all of the substance found in the 2010 Xbox 360 port. It’s a notoriously tough game but mastering the way through the game’s second loop can feel astonishingly rewarding. 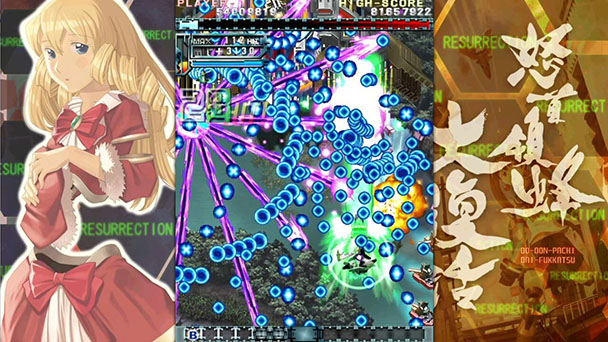 Gaming’s early era was dominated by the shooter. It was a time when pioneering titles like Space Invaders and Galaga didn’t just establish the tenets of the genre, but they helped propel the entire medium toward mainstream popularity. But much like a shoot-‘em-up pilot’s traditional three-ship existence, the action gradually came to an end. Once arcades atrophied, shooters sought refuge on game consoles- and in the ensuing years become an increasingly niche product.

With fresh bullet dodging, boss-busting, experiences growing rare, a growing number of gamers are revising classic shmups. And at the apex of the experience is the output of Shinjuku-based Computer Art Visual Entertainment. Better known as Cave, they’re known for exemplary efforts like Deathsmiles, Espgaluda, and Mushihimesama– each game pitting a solitary pilot against swarming enemies and a myriad of enemy projectiles. But arguably, the studio’s most famous works are the DonPatchi and DoDonPatchi series- which still reign as some of the genre’s best and most maniac experiences. 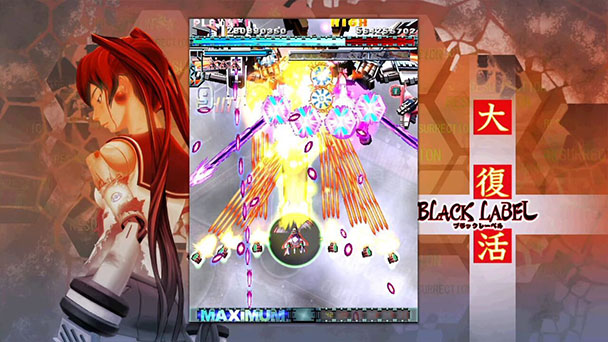 Feel the Sting of a Thousand Angry Bees

With the Steam release of DoDonPachi Resurrection (aka DoDonPachi DaiFukkatsu, literary “Angry Leader Bee Great Resurrection” with the main title being an onomatopoeic expression for the sound of gunfire), Switch owners no longer have to delve into the oft-nefarious world of arcade-board emulation or hunt down a prohibitively priced PCB to enjoy this landmark title. While the game has a few launch lapses, Resurrection’s assemblage of play modes is poised to please shmup supporters.

Initially, disappointment could emerge when approaching DoDonPachi with a traditional gaming mindset. Most contemporary games are intended to be extended expeditions, punctuated by a final battle that summons a sense of finality. But with Resurrection, players can potentially complete the game in less than an hour and be left scratching their heads as they wonder if that was the entirely of the experience. 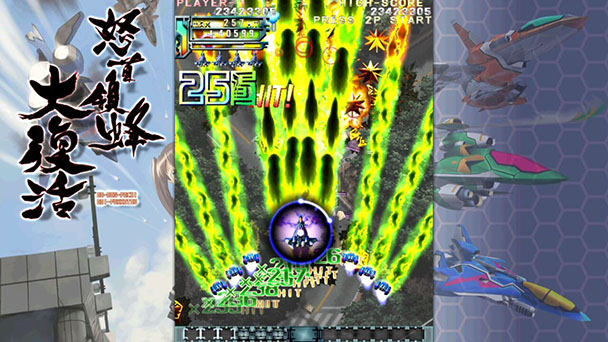 But shmups are quite a different endeavor- with the goal of a single-credit completion typically taking dozens of attempts. Given DoDonPachi’s difficulty, that could potentially take weeks, as they learn to overcome each overwhelming adversity that the game throws at you. In that sense, the title is like an intricate puzzle game, forcing gamers to both outthink and out-maneuver its incessant barrage of bullets. Early on, you’ll likely glean at least one shooter convention: your actual susceptibility isn’t your entire ship, but rather a small cluster of pixels. Realize that, and you’ll soon be careening through curtains of bullets with the precision of a Formula One driver at Nürburgring.

Pleasingly, DoDonPatchi extends a number of options enabling you to tackle your endeavor in a number of distinct ways. A selection of ships offers a trio of balance options. The red ship offers a standard STG loadout, with your nimble craft producing a taut, forward-facing field of fire, while the green ship offers a broader offensive vector with sub-craft that change direction with lateral movement. Finally, there’s the blue craft, which trades a slower speed for the largest offensive output. But given DoDonPatchi’s propensity to flood the screen with intricate patterns of projectiles, perhaps quicker movement isn’t always the best route, with slower ships allowing for projectile- eluding precision. 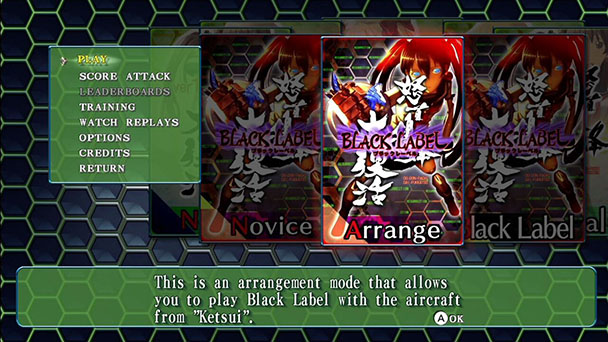 Your bombing abilities offer a similar versatility. Selecting the “Bomb” method automatically detonates one of your warheads when you hull is about to be breached, giving beginners an extra bit of help. Meanwhile “Power” mode allows gamers to choose between two shot types: normal and boost. The latter deals more damage to foes, and when your hyper counter gauge is filled, enemy bullets can even be canceled. As the moniker indicates, “Strong” boosts your offensive power, at the cost of being unable to annul adversary fire.

Beyond components for training, replays, and leaderboards, players can take on eight deviations of DoDonPachi, with 1.5, 1.51, a trio of Arrange and Novice Modes, and even the three different Black Label divergences. Sure, the digressions might seem minor, with an extra mecha-kogyaru boss here and a different soundtrack there. But since Resurrection’s journey is about building mastery and learning how to keep combo chains escalating, these seemingly secondary discrepancies stand out here. The one failing is found in the game’s replay system. At launch, aspiring STG aces aren’t able to download and study the videos of expert players. You’ll want all the assistance you can get, since DoDonPachi’s cascades of fast-moving projectiles can be punishing to newcomers, even on Novice mode. Be aware that’s there’s an abundance of slowdown in the 1.5.1 version, reflecting the pacing of the original. You’ll learn to welcome it, as it can often be a lifesaver.

Regardless of which mode you prefer, you’re bound to appreciate DoDonPachi’s visual style, which imagines a militarized future teeming with hulking laser-spewing heavy machinery. Backdrops employ an exceedingly clean, angled perspective, contributing to the game’s high-tech look. Sonically, Manabu Nami’s tracks offer variety across the game’s selection of stages, each settling into an upbeat groove that makes an ideal accompaniment to the maniac on-screen action. For some, DoDonPatchi’s solitary downside might be its unflinching difficultly. Midway through the first stage, the challenge level is lofty, with subsequent stages only getting tougher.

As such, frustration can occur frequently, especially during your first few hours of play. But stick with it and something will click, with infuriation happening less frequently. Before long, you’ll find yourself deep in DoDonPachi’s depths, disregarding everything but the crowd of bullets immediately in front of you. Like the genre’s best efforts, it’s easy to slip into a Zen-like state and overcoming an overwhelming amount of adversity can feel blissful. 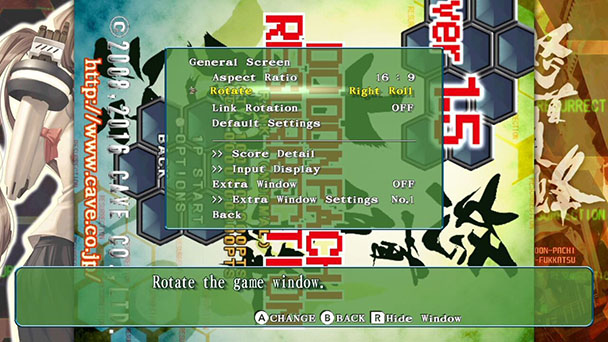 DoDonPachi Resurrection (Switch) review
Heralded as one of the genre&rsquo;s best efforts, DoDonPachi arrives on Switch with all of the substance found in the 2010 Xbox 360 port. It&rsquo;s a notoriously tough game but mastering the way through the game&rsquo;s second loop can feel astonishingly rewarding. Gaming&rsquo;s early era was dominated by the shooter. It was a time when pioneering titles like&nbsp;Space Invaders&nbsp;and&nbsp;Galaga&nbsp;didn&rsquo;t just establish the tenets of the genre, but they&hellip;

Summary : Tougher than high-carbon steel and more beautiful that a shower of cascading sakura, it’s easy to see why DoDonPatchi has earned a place in the STG pantheon. While its journey is arduous and might seem impossible at times, Resurrection gives you all the tools to chase that single-credit ambition.