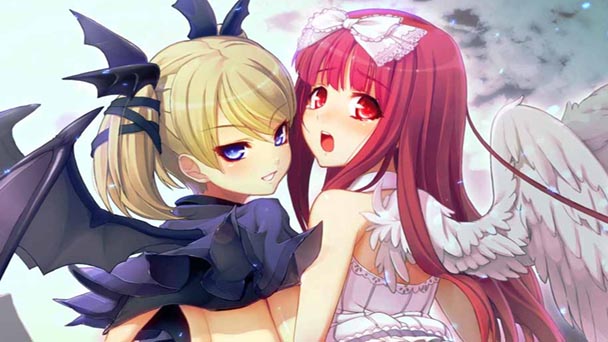 While new STG coin-ops might be distressingly rare, PC owners are experiencing a bullet-hell renaissance. At least some credit for this resurgence should be given to Tokyo-based Degica- who have published a succession of top-notch titles for stateside shmup supporters. From the blister-inducing, bug blasting Mushihimesama to DARIUSBURST Chronicle Saviours’ assault on mechanized sea monsters, their ports have renewed interest in a once-thriving genre.

Once inducted into the ersatz shmup appreciation society, players will inevitably learn of the STG’s pinnacle- the CAVE Shooter. Since their formation in 1994, Computer Art Visual Entertainment has produced a majority of the industry’s projectile-dodging masterworks, from the aforementioned Mushihimesama, to the beloved DoDonPachi series. But for many, 2007’s Deathsmiles retains a special spot in the shoot-‘em-up pantheon. 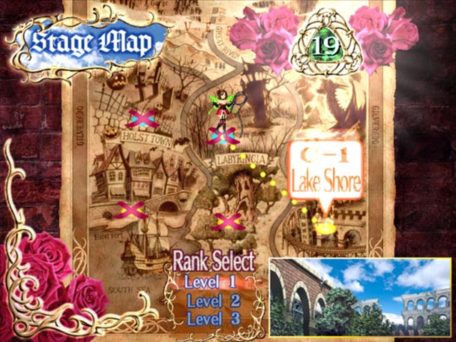 Some of Deathsmiles’ draws are immediately obvious. Jump into Normal Mode and you’ll encounter an accurate rendition of the original arcade cabinet. Before venturing into one of the game’s seven stages, you’ll likely glean the inspiration for the game’s visual artistry- as you choose from a cast of four lovely loligoth maidens. Whether you select Windia, Casper, Follett, or Rosa, each girl resembles a mannequin from Harajuku’s celebrated Takeshita Doori storefronts, outfitted in an emerald-hued frilly maid uniform or a devilishly cute, black velvet kogyaru skirt.

Each loli offers distinction not only through individual storylines and two different endings, but also in capability. Windia is the requisite all-arounder, with speed and power delicately balanced, while Casper emphasizes agility as she darts around the screen. If you don’t mind forgoing a bit of maneuverability, then you might prefer Rosa, who packs the most powerful belligerent punch. Individuality is also emphasized by each girl’s own familiar- a floating assistant who contributes additional firepower. 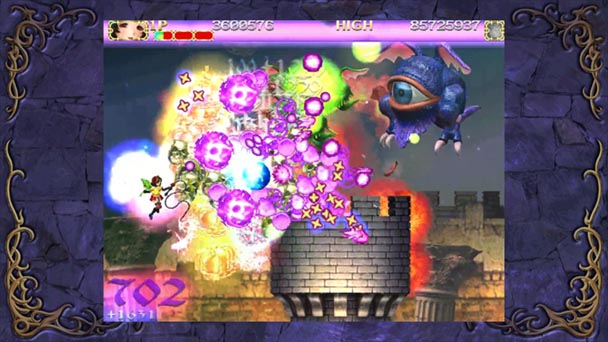 No matter which heroine is picked, each one feels powerful, with ordinary foes defeated with only a bullet or two. Using two buttons to fire in opposing directions, players will want to perfect their crowd-control skills, as on-screen enemies will fill the skies with bullets, quickly transforming an offensive initiative into a defensive one. It’s here that one of the game’s less obvious virtues can be found, with Deathsmiles constructing a sublime ebb-and-flow. While drawing a bead on enemies encroaching from both side of the screen, the inevitable flash of protective play follows. Sure, it’s a mechanic that’s evident in almost all STGs, but here it’s executed with the precision and finesse of a Russian ballet.

Peer closer, and several other gratifying mechanics emerge. If you inadvertently find yourself surrounded by enemy fire and need to make a hasty retreat to another part of the screen, you can release the fire button to increase the movement speed of your sprite. Sure, you risk the screen being filled with both foe and flak, but it’s always a nice option to have. Often STGs hide their hit-boxes, making things prohibitive for newcomers. That’s not the case with Deathsmiles. Not only are there multiple skill settings called Ranks, but players can also find additional ways to modify the challenge level via the game’s menus. 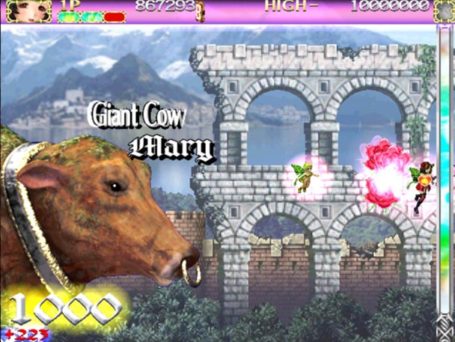 The one downside of Normal Mode is a commitment to arcade accuracy. In execution, the means that Deathsmiles stays true to its original 240p output, rendering a small window in the middle of your monitor. Sure, it’s scalable, but increasing the size of the playfield also increases the amount of pixelation. For players craving more fidelity, they can venture into 1.1 Mode, which upscales the quality of the game’s sprites. Considering the quality and diversity of enemies, it’s a tempting option, allowing players to relish the game’s gothic themes as they mow down waves of ravens, reapers, and cleaver-carrying swine. Bosses look especially enchanting with the higher resolution, whether you’re battling Jordon, an undead baron or Mary, the giant cow. Pleasingly, Deathsmiles isn’t afraid to allow absurdity to enter its pool of enemies, making for a memorable experience.

Deathsmiles’ other modes add well-heeled accompaniments to the main game. 1.1 Mode also allows players to control their familiar using the right analog stick. This is especially useful on elevated difficulty settings, when familiars can block enemy shots and also collect counter-bullets. Although these small projectiles can harm players, collect a sufficient quantity of these with your ally and players can enter a state where their offensive power is increased and they’re partially immune to enemy fire. Mega Black Label Modes add a new character, Sakura, the optional Crystal Shrine stage, and the ability to reach astronomic levels of challenge. 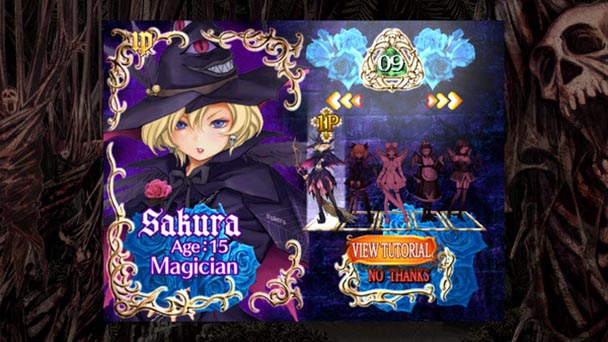 Beyond these options are a Score Attack mode, where players can skip the game’s narrative elements as well as a Training Mode where you can practice stages after adjusting a variety of settings. For score chasers, there are online leaderboards as well as the ability to watch the replay of other people’s games.  Potentially, gamers can study the point compiling techniques of other- or at the very least admire the devilish dexterity of professionals.

Basiscape co-founder Manabu Namiki, who has worked on the Gradius, Contra, and Castlevania Rebirth titles, as well as Black Rock Shooter: The Game delivers another consummate score for Deathsmiles. Blending piano, searing guitar, and choral samples, the title’s soundtrack is consistently rousing, demanding players enter the game’s menu and bring the music to the forefront. Culminating the STG concert is a rendition of Bach’s Toccata and Fugue in D minor, which demonstrates that remixed Baroque and final bosses can become a stylish intermingling. 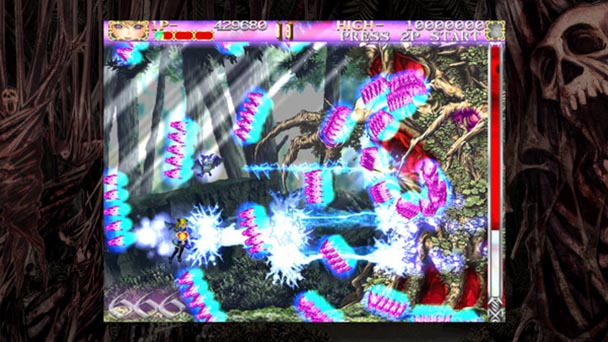 On the PC, Deathsmiles performs admirably, offering a fluid framerate only beset by the sporadic instance of deliberate slowdown. We played the game on a variety of rigs, from the i3 version of the Alienware Alpha, a modest A10-powered laptap, with a burly desktop with consistent performance on all machines. Expected options such as 4:3, 16:9, windowed and fullscreen support are available, although the initial transition to fullscreen can result in a blank display. Similarly, Alt-tabbing over to Deathsmiles window can feel a bit wonky, with the game exhibiting a black screen for about ten seconds.

Beyond the exquisite loligoth vibe and sublime play mechanics, Deathsmiles other strength is scalability. Even if you’re not a bullet-hell veteran, with a bit of dedication (and a few continues), even inexperienced STG students should be able to surmount the games collection of stages. Like any respectable shooter, that’s only part of the journey. Perfecting your game in the long-term goal here, with Deathsmiles offers more than enough nuance to get you going for a very long time.

Deathsmiles was played on the PC with review code provided by the publisher.

Deathsmiles
Platform: PC
Developer: CAVE Interactive Co. Ltd.
Publisher: Degica
Release date: March 10th, 2016
Price: Regularly $19.99, $17.99 via Steam through March 17th
Deathsmiles (PC) review
While new STG coin-ops might be distressingly rare, PC owners are experiencing a bullet-hell renaissance. At least some credit for this resurgence should be given to Tokyo-based Degica- who have published a succession of top-notch titles for stateside shmup supporters. From the blister-inducing, bug blasting Mushihimesama to DARIUSBURST Chronicle Saviours&rsquo; assault on mechanized sea monsters, their ports have renewed interest in a once-thriving genre. Once inducted into the ersatz shmup appreciation society, players will inevitably learn of the STG&rsquo;s pinnacle- the CAVE Shooter. Since their formation in 1994, Computer Art Visual Entertainment has produced a majority of the industry&rsquo;s projectile-dodging&hellip;

Summary : There’s are a number of reasons why CAVE shooters are considered the genre’s pinnacle. Deathsmiles demonstrates more than a few, delivering a riveting blend of rapid fire action, polished play mechanics, and a heap of visual charm.