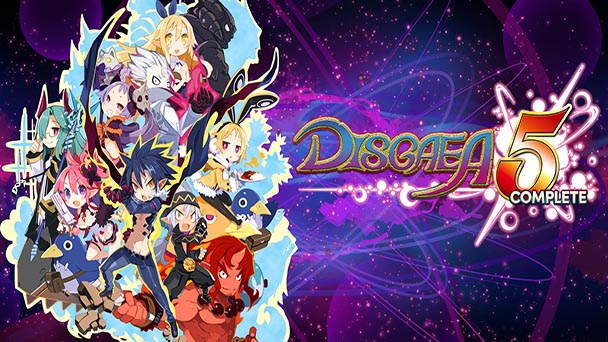 Seemingly, the PC port of Disgaea 5 has caught itself in series of Prinny-esque predicaments. Originally intended for release last May, the title was inexplicably delayed after user feedback was gathered during beta testing. Subsequently, NIS America’s demo for Disgaea 5 Compete turning out to be a full version of the game. And with little foreshadowing, the title is now available on Steam, albeit with the title’s online functionality removed. Dood!

When the game was originally released three years ago, it arrived after Nippon Ichi Software president Souhei Niikawa avowed to broaden the size of the strategy role-playing game audience. But attracting new fans seemed difficult without tampering with the series’ signature complexity. After all, Disgaea’s intricate interweaving of character cultivation, Item Worlds, grid-based battles, and Dark Assemblies/Classrooms/Senates are an essential part of its charm. 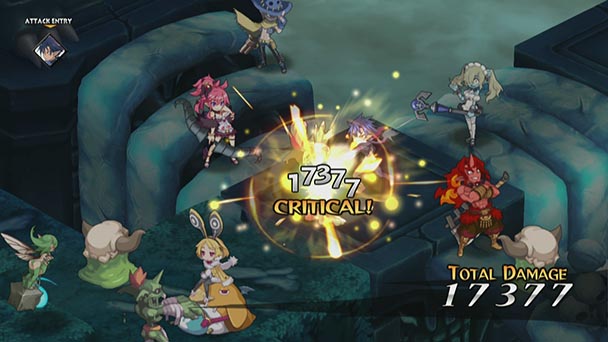 Like the PlayStation 4 release, Disgaea 5 Complete reveals a title that disregards Niikawa-san’s ambitions. Even with the absence of components like the Strategy Assembly and Money Maps, little of the cherished complication has been toned down. Instead, the title augments some of the franchise’s more time-consuming mechanics. While Complete might not court a constituency of new Netherworlders, dumbing down Disgaea would have been a detrimental act. As it stands, releasing a abridged game with ‘Complete’ in its title is a damning one.

A bit more bad news: both the plot and protagonists offer only a portion of the charm exhibited by Hour of Darkness’ Laharl, Etna, and Flonne (or even A Promise Unforgotten’s Valvatorez). As the original subtitle suggested, Disgaea 5’s central theme is revenge. It’s a sentiment that’s expressed as a ragtag group of Overlords band together to take down Void Dark, a nefarious warlord who’s obsessed with conquering the Netherworlds. Players follow the conflict looking over the stoic shoulder of Killia, a seemingly world-weary demon as well as Seraphina, an Overlord endowed with a coquettishness irresistible to all but the main protagonist. 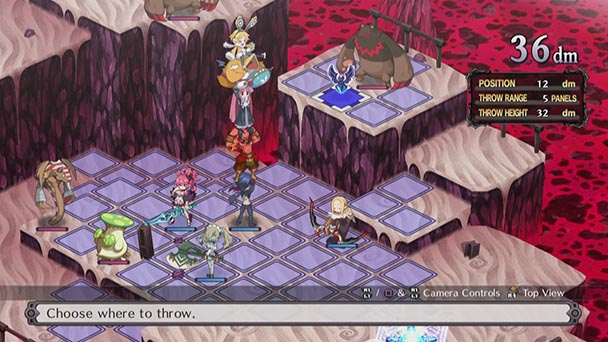 While the plot certainly has potential and delivers some fulfilling exposition in its twilight hours (albeit wrapping things up too abruptly), Disgaea 5’s early hours can be a bit joyless. A majority of this issue revolves around Killia, who extends little of the puckishness of Laharl or Mao. For far too long, he’s used as the straight man/tsukkomi, playing off Seraphina’s mildly amusing demeanor. While his character eventually receives exposition and expresses emotion, it’s up to Disgaea 5’s other Overlords to help carry the majority of the plotline. Undoubtedly, the game’s best characters are whimsical secondaries like Usaria, a half-bunny heiress who must eat curry, lest she’ll go bonkers.

Sadly, Killia’s woes aren’t just related to the protracted pace of his story arc. Play Disgaea 5 with English audio and you’ll be underwhelmed by the vocal direction. Although Mamoru Miyano’s Japanese voice-over renders conversation in a resigned tone, the dubbed version makes Killia sound perpetually bored. But that’s not the only aural misstep, with jarringly off-key singing awaiting players in Complete’s main hub. 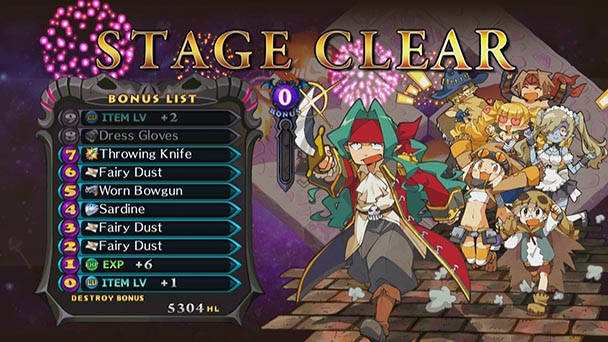 Get past these minor missteps and the title extends the type of polish fitting for a franchise now in its six major iteration. It’s clear that the Gifu-based team at Nippon Ichi are cognizant of what the fan-base appreciates, with Disgaea 5’s amendments advance playability. Chief among these additions is Revenge Mode. Now, as characters receive damage a gauge gradually fills.  Once it reaches capacity, the combatant gets a stat boost and special attack. Not only does the mechanic allow for a rousing reversal of fortunes, many of the abilities are especially pleasing, whether it’s Seraphina’s capacity to beguile all male characters or Red Magnus’ aptitude for turning into a damage-dealing giant.

Likewise, the ability to assign characters into Squads adds another intriguing component. Here, players can create teams of leaders and subordinates, with the regiment receiving some sort of perk, such as the ‘Flat Squad’ where characters with a streamlined bosom receive a stat boost on the battlefield. Squad skills can also streamline play, with players able to order their team to attack foes, eliminating the need to set up a succession of individual attacks. 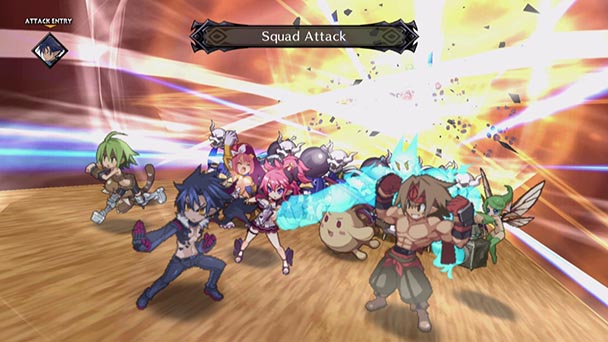 What more, Squads are capable of capturing enemies and sporadically earned as post-battle dividends. While defectors make for weak combatants at first, with a bit of persuasion, that can soon be shaped into a productive factor for your squad. Undoubtedly, the Nether Research Squad will be appreciated, allowing players to send characters out to reconnoiter new regions returning with experience and the occasional rare item. The only problem is that unused characters have the tendency to flourish faster that your primary battle party.

Elsewhere, Disgaea devotees will find a multitude of small, but gratifying tweaks. Now, Geo-Panels look distinctive, allowing for easy visual discernment, while information tabs divulge hues- a crucial addition for any color-impaired gamer. Combatant placement has been reformed to a movement radius, awarding armchair tacticians with a bit more flexibility when formulating their plans, permitting multiple adjustments before a character has attacked. Unsurprisingly, Disgaea 5’s additions help to broaden battles, with a majority of new character classes like the Sage, Maid, Dark Knight, and Pirate facilitating ranged attacks. To intensify melee strikes, players are likely to appreciate the wrestler, who delivers a devastating amount of damage close-up, while retaining the ability to shift around the battle arena with unrivaled agility. Certainly, the capacity for characters to wield more than one weapon is rewarding, inspiring player experimentation. 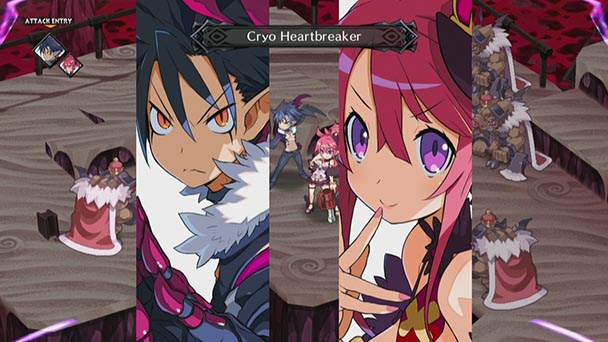 Another of Disgaea 5’s merits are the collection of components culled from its twelve-year legacy. The Item World continues to be destination when gamers seek to give their characters the upper hand. Here, an increased number of random events await players, awarding fortune- or even fatality in the form of remarkably resilient foe who will one-shot a character who dawdles on their way to the level exit. Meanwhile, the return of the Chara World offers a similarly boundless battlefield, permitting players to supplement stats like movement range, critical rate, jump power and throwing range by navigating a board game-like arena. On the PlayStation 4 and Switch, Disgaea 4’s map making tools made a reappearance in the form of the Netherworld Edit Shop, allowing gamers to build their own creation, or simply download the efforts of others. But here that component missing, meaning you’re not able to share items with fellow Disgaea fans or craft your own stages to test the prowess of other players.

Look past the loss of online functionality and Disgaea 5: Compete extends a rather robust package. Although the game’s plot and characterizations are weaker than previous entries, there’s no doubt that the title’s cornucopia of play mechanics rank as the franchise’s best effort. If you haven’t delved into the franchise, the recent release of Disgaea 1 Complete remains the preferred starting point. There, players can master many of the series’ persistent mechanics before moving on to other successors. For doods and doodettes that are already devoted disciples, Disgaea 5 is ready to deliver fifty-plus hours of strategy role-playing bliss, adorned with silliness, sophistication and a plethora of high-resolution sprites. Just expect to go it alone and woefully, completely off-line.

Disgaea 5: Compete was played on the PC with review code provided by the publisher.

Disgaea 5 Complete (PC)
Seemingly, the PC port of Disgaea 5 has caught itself in series of Prinny-esque predicaments. Originally intended for release last May, the title was inexplicably delayed after user feedback was gathered during beta testing. Subsequently, NIS America&rsquo;s demo for Disgaea 5 Compete turning out to be a full version of the game. And with little foreshadowing, the title is now available on Steam, albeit with the title&rsquo;s online functionality removed. Dood! When the game was originally released three years ago, it arrived after Nippon Ichi Software president Souhei Niikawa avowed to broaden the size of the strategy role-playing game audience.&hellip;

Summary : Regretfully, Disgaea 5: Compete feels incomplete after the amputation of its online component. But if you’re able to look past this deficiency, there’s still a healthy amount of strategy, story, and off-line substance to satisfy most diehard doods.