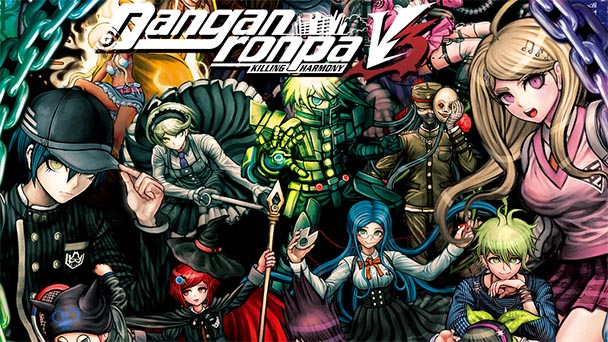 In one of Hollywood’s best meta-analyses, Scream 2 explained the difficulties of crafting a slasher film sequels. Identifying larger body counts, more elaborate and gruesome death scenes, and the apparent immortality of the franchise’s bad guy, Jamie Kennedy’s character explained the formula that ensnares screenwriters and film directors. Likely, this obligation is also felt by Kazutaka Kodaka- the creator, scenario writer, and designer behind the Danganronpa series.

With the release of the third main entry in the growing franchise, there’s a taunt structure found in each title. Typically, at the beginning of the game, the main protagonist arrives, finding fifteen other Ultimates, characters who personify a skill or trait. Unable to leave the Academy (or in the case of Goodbye Despair, a tropical island), on their own free will, they are given an ultimatum by Monokuma, the series’ monochromatic robot bear- who serves as a psychopathic master of ceremonies. If an Ultimate is able to kill one of their fellow classmates without leaving any kind of incriminating evidence, they’re able to depart from the academy, while the remaining student body is butchered. 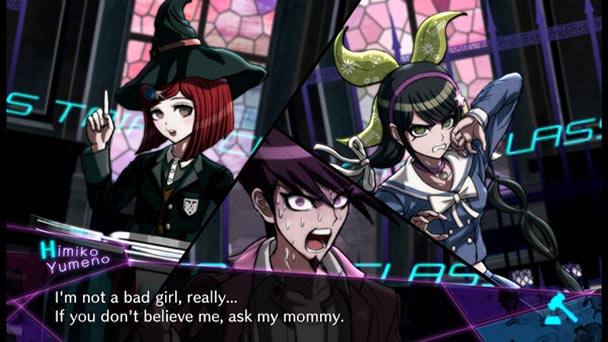 With the third iteration of Monokuma’s killing game as well as Kodaka’s commitment to tie-in properties like The End of Hope’s Peak High School anime as well as biweekly contributions to Famitsu magazine, there’s the strong possibility of diminishing returns for Danganronpa. And while the game’s prologue and early cases have the tendency to plod along, Kodaka ultimately pulls it all off, crafting a continuation that will satisfy series fans.

For Killing Harmony, players assume the role of Kaede Akamatsu, who as the Ultimate Academy for Gifted Juveniles’ resident pianist prodigy, exhibits sensitivity and empathy for her classmates. Like her fifteen colleagues, she’s initially characterized by her talent, but each gradually reveals a full personality, filled with traits and idiosyncrasies. Given the eclectic cast of characters, it’s difficult to not identify with at least a few Ultimates. But as with any Danganronpa game, growing too attached to a character can be disheartening, as you’ll never know who’ll turn up dead next. 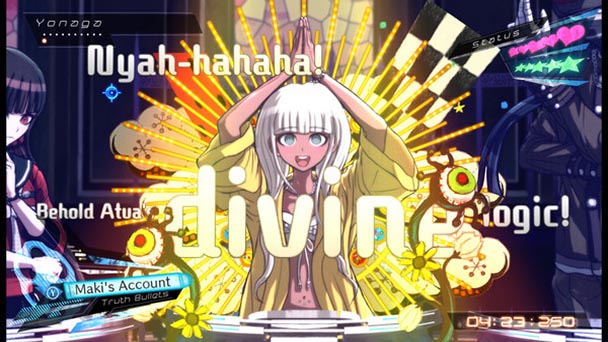 But that’s not to say that the Danganronpa team isn’t showing signs of fatigue when coming up with new archetypes. While Killing Harmony adopts some interesting approaches, whether it’s the gradual reveal of Maki Harukawa, the game’s Ultimate Child Caregiver or the constant stream of expletives issued by Miu Iruma, the Ultimate Inventor. But then there’s characters like Gonta Gokuhara, who was raised by a pack of wolves, and therefore developed the ability to communicate with mammals and insects. While the premise holds promise, permitting reflection between the rustic and the metropolitan, Gokuhara’s undeveloped speaking style is likely to draw the ire of players. Similarly, the optimism and trust exhibited by Killing Harmony’s Ultimate Astronaut just doesn’t resonate like characters across the first two games. That said, none of the characters are complete duds, but it does feel like Kodaka’s creative energies show signs of deterioration.

Another discerning component of Killing Harmony centers around its exposition. Both Trigger Happy Havoc and Goodbye Despair has fleeting moments where the dialog stalled. But this outing feels especially long-winded at times. Loquacious conversations sporadically won’t help with the character development or in helping to cultivate a sense of intrigue. Instead, they seem overly verbose to pad Killing Harmony’s playtime. And this time out, redundancy is conspicuous, with V3 reiterating without justification. 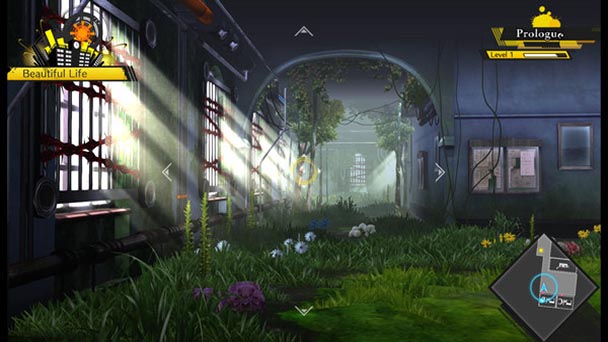 Fortunately, the game’s narrative has some bright spots. Monokuma’s five mechanicalized bear pups channel cute and crazy in equal measures. Not only does the sloth offering their own amusing take on the Academy’s announcements, but they also provide their own plotline. Another decision destined to delight dedicated J-game fans is the incorporation of characters like the Ultimate Main and Ultimate Cosplayer. There are quite a few nods to the otaku culture presents, and thanks to the liberties taken by NIS America’s localization team, a surprising amount of refences to more domestic things, with everything from Taylor Swift to alternative facts woven seamlessly into the dialog.

As with previous Danganronpa titles, the game’s chapters have distinct sections. Daily Life allows players to explore the Academy, opting to hang out and improve social bonds with characters via gifting. Socialization is incentivized, and if you’re able to offer a suitable present, you gain equippable skills. When the inevitable happens and a body turns up, the game’s transitions to Deadly Life. Here, players play armchair investigators, combing over the crime scene for any suspicious details and gather testimonies from classmates. 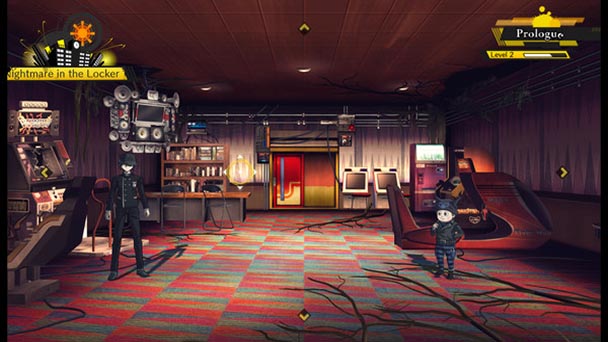 As with previous Danganronpa titles, the subsequent Class Trials are the most interesting and interactive component of each chapter as you suss out truth. It’s here that Killing Harmony employs a selection of mini-games as a metaphor for the judicial process, with elements like collected evidence taking the form of “truth bullets’. This is most evident during events like the non-stop debate, where arguments materialize on-screen, and it’s up to players to look for inconsistencies. This time out offers a form of deception, permitting players to turn their truth bullets into Lie Bullets. With this tool, you’re able to refuse statements are aren’t noticeably inconsistent, adding an interesting wrinkle to proceedings. Seemingly, relaying on this type of ruse will influence Killing Harmony’s endgame, extending a curious ethical dilemma to the title.

Largely, the mini-games are more forgiving and enjoyable that the diversions found in previous outings. And save for scoring, failing at V3’s take on Outrun or Minesweeper isn’t too disheartening, with little more than a temporal punishment. One new element poised to please pleasers is the incorporation of a Debate Scrum, where teams launch keywords at each other. Considering the penalty for injustice is death, it makes sense to witness the heated finger-pointing and outrage encapsulated during these bits. 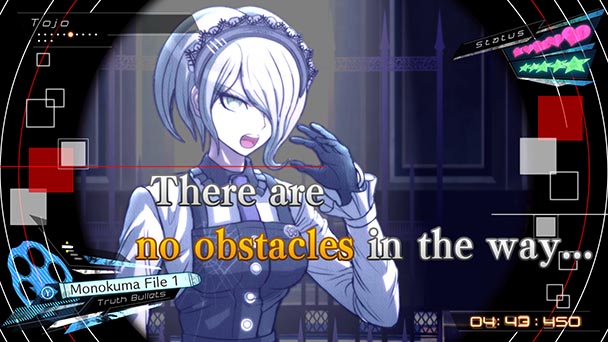 Across the third main iteration, Danganronpa’s formula is beginning to show its age. Kazutaka Kodaka and company are aware of this and have endowed Killing Harmony with nearly enough innovation to mask a reliance on routine, especially during the game’s trials. But with longwinded dialog and a script that sags during it’s early hours, the title isn’t quite as lean as it should be. In a strange way, I’d rather see the franchise end here than being turned into a disingenuous cash-cow that exists as a revenue stream. That just might be the Ultimate Disappointment.

Danganronpa V3: Killing Harmony was played on the
PlayStation 4 with review code provided by the publisher.

Summary : Largely, Danganronpa V3: Killing Harmony won’t disappoint Monokuma maniacs, extending another murder-filled rumination. There are some highpoints for sure, from gruesome executions, to the new mini-games, but there’s also the lingering specter of familiarity to the basic structure.