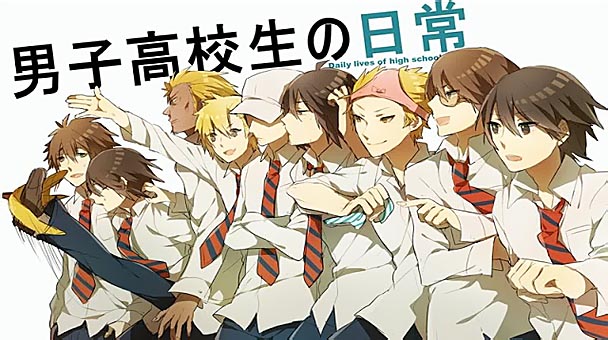 Growing up in the Bay Area as an introverted, video-game obsessed, athletically-inept young boy didn’t provide many opportunities for socialization with girls. As such, most of what I learned about females came either through stealthy observation or via dubious information distributed through a network of equally nerdy friends. In short, girls were like Atari’s purported decision to bury thousands of copies of E.T. The Extraterrestrial in the New Mexico desert- a confounding, yet perpetually provocative mystery.

This perspective of gender mystery is at the heart of Daily Lives of High School Boys (Danshi Kōkōsei no Nichijō), an anime based on Yasunobu Yamauchi’s insightful manga. The twelve episode series initially centers on the day-to-day activities of three members of an all-male high school- Tadakuni, Hidenori, and Yoshitake. Delivered in a brisk vignette style, installments reconnoiter the rudiments of teenage life. From impromptu amusements such as a LARPing session triggered by a stick found on a sidewalk to curiosity which results in the pillage of a sibling’s panty drawer, High School Boys representation of youth is remarkably perceptive. 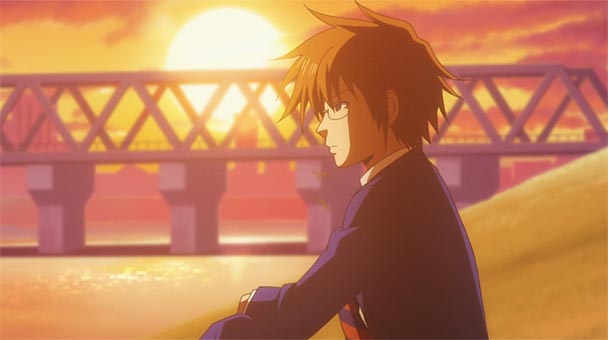 Conflict typically stems from a difference in perspective. Beyond the obvious divergence between males and females, group tension is articulated through internal monologues which contrast perception against reality. In one instance, a trio member eavesdrops on the conversation of his two friends, wondering why he’s absent from the whole dialog. Another sequence flashes back to a moment where one of the boys in bullied, and a masked avenger comes to his rescue. Like most of the Daily Lives of High School Boys brief segments, the sketch ends in a punch line before an instantaneous shift to the next arbitrary topic.

While the rapid-fire exposition and lack of transitionary elements keep Daily Lives moving at a rapid-fire pace, this format isn’t without flaw. Occasionally, uproarious bits- such as member of a rival school attempt to escape the frights of a student-made haunted house demand lengthier segments. Later, when Daily Lives’ character roster grows exponentially, the anime loses a bit of its well-crafted intimacy, with other groups competing with the core trio for screen time. Ideally, the series could have balanced its fragmented format with the sporadic conventional twenty-four minute plotline. 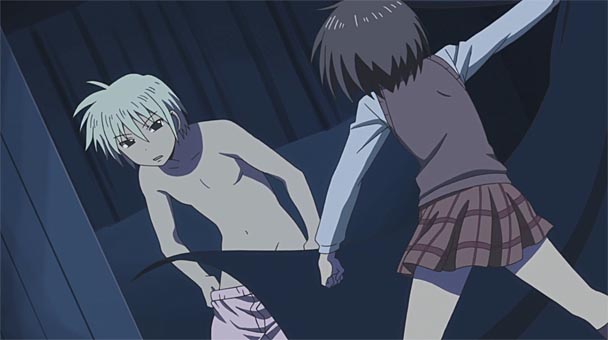 That said, some of the Daily Lives of High School Boys’ subordinate characters are charming depicted, encouraging attachment from the viewer. From a delinquent-looking youth with a warm heart and aggressive older sister to a pensive unnamed girl prone to reading books by the local river bank, a significant amount of hilarity is mined from the anime’s cast of quirky secondaries. Deftly, Daily Lives cultivates a variety of humor. Beyond idiosyncratic characters, comedy comes from over the top outrageousness, carping on videogame and anime tropes, as well watching a character deals with gut-wrenching embarrassment. The anime frequently breaks the forth wall, with the leads remarking on Yamauchi-san’s intentions or the show even acknowledging its increasing cast of characters.

Presented on two Blu-ray discs housed in art-adorned slimcases, Daily Lives of High School Boys delivers a pristine 1080p output. Although the character design is inspired- with each cast member making one unsanctioned alteration to their school uniform, background art leans toward the minimal. Sonically, the Premium Edition supplies a LPCM-encoded 2.0 channel soundtrack, providing the series’ original Japanese voice over. Save for a few negligible blemishes, NIS America’s localization efforts are commendable; and a few minor additions demonstrate that the editors had an enjoyable time translating the series. 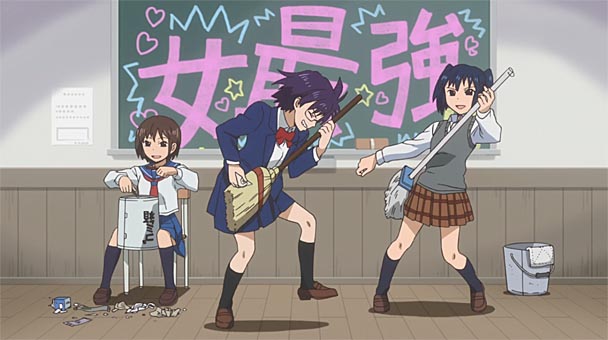 In keeping with the publisher’s tradition, inside the attractive oversized box which stores the media, purchasers will find an accompanying hardbound book. While NISA’s supplemental texts strive to match the tone of their source material, here the team excelled- providing a supplement that flawlessly complements the series. Entitled Daily Guide for High School Students, the book assumes the pretense of a sardonic manual, issuing amusing analyses which accompany episode summaries and characters sketches. Additionally, the text’s character bios are likely to assist with the anime’s wealth of personalities.

Daily Lives of High School Boys prolongs NIS America’s succession of splendid localization choices. While the series may lack the poignancy of the publishers best picks, such as bunnydrop, Anohana: The Flower We Saw That Day or Natsume’s Book of Friends, the anime does supply a steady stream of unaffected laughs while peering into the lives of its routine protagonists and eccentric side characters. 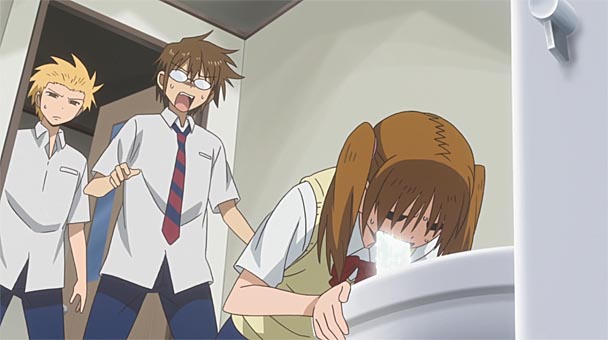