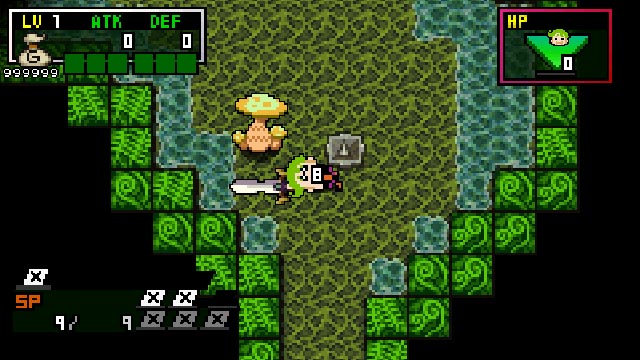 Since its release over six years ago, Sony’s PlayStation Portable has served as a home for some delightfully eccentric titles. One of the best exemplars of this trend was 2010’s ClaDun: This is an RPG!, which offered a delightfully quirky, action-oriented, Rogue-like for players on the go. Lacking a UMD release, the title never quite garnered the audience it deserved. Regrettably, an enriched sequel is following its predecessor’s digital publishing path, with a release confined to the PlayStation Network. Hopefully, savvy gamers won’t overlook this improved iteration. For a reasonable twenty dollar price, the title offers a teeming amount of treasure-hunting goodness destined to keep players occupied for hours.

Returning adventurers will notice the truncation of ClaDun x2’s narrative. Whereas the first game offered a revolving door of protagonists making their way through the loot-filled landscapes of Arcanus Cella- the sequel wisely remains focused on exploration. Recalling another NIS property, the game’s setting is a remarkably lively purgatory, where a player’s sole penitence is dungeon scavenging. Fortunately, the deity that oversees x2’s world is benevolent, as the game’s subterranean sprees are consistently gratifying. 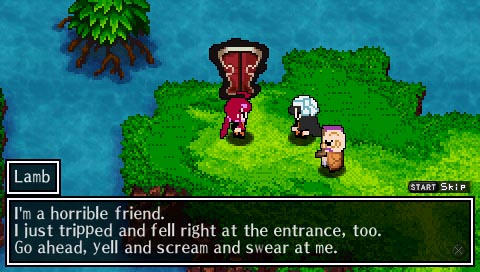 Like This is an RPG!, this title’s strategic component centers around the Magic Circle, which serves as a figurative circuit board. Although only one character is seen on-screen during the dungeon delving, the protagonist’s stats are augmented by a selection of concealed teammates. Before plunging into a quest, players manipulate one of x2’s templates- inserting created characters and artifacts in an effort to maximize their speed, defense, hit and spell points. Since each Magic Circle has its own benefits and disadvantages (ranging from attack bonuses to a HP deduction), it’s imperative that players constantly change and tweak the blueprint to persevere in the game’s ever-changing environments. Since teammates gain experience just being in the Circle, successful players should also vary their lead explorer, in an effort to maximize the efficiency of the entire party.

Whereas augmenting the capacity of the Magic Circle is a cerebral endeavor, x2’s explorations are largely instinctive and fast-paced. While the sporadic floor trap begs for triggering when a foe is in dogged pursuit, a majority of the game’s stages are breezy brute-force treks, recalling Gauntlet’s annihilation of roaming antagonists. Beyond a bit of switch pulling, the game’s jaunts are tailored for a portable title, encouraging players to speed run through them for a chance at unlocking additional classes. The sole exception exists in some of the title’s bosses, who can present a challenge to gamers who haven’t polished their adventuring party. 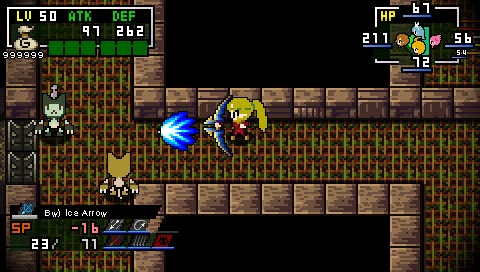 Beyond the game’s vast selection of pre-built dungeons, ClaDun’s randomized dungeons (called Neo-Geons, as well as the tougher Tri-Geons) offer opportunities for supplemental dungeon skulking. While the layout of these levels can be generic, stages avoid the pratfalls of other arbitrarily designed labyrinths, consistently making sure that staircases to deeper floors are accessible. Clever, multiple egresses on each floor allow players to have a bit of control over the strength of monsters, distribution of loot, and likelihood of finding rare items, as gamers have the possibility of continuing to the 99th level.

Even more intricate that x2’s arenas are the title’s extensive collection of weapons- ranging swords, axes, clubs, bows, daggers, staffs, and spears. Although the game’s 8-bit inspired artwork may not articulate the difference between a dark bat, sprout rod, and aloe rod, each staff feels distinctive. With missiles which travel forward, split into three, or home in on enemies, variances extend beyond elemental traits. Just as robust is the game’s magic system (available to all classes) which allows players to carry a custom spell book. 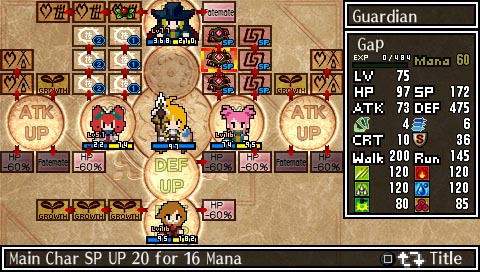 Pleasingly, ClaDun’s customization capabilities extend far beyond adjusting a gamer’s grimoire. Players can redraw character faces, equipment, and even design their own music. While it will take a keen ear to outshine the title’s stylish jazzy dungeon ditties (a chiptune soundtrack is also selectable), the ability to fiddle with the game’s sprites and songs offers a pleasing companion to the dungeon crawling.

Since the announcement of the Vita, the number of new games being released for the PSP has slowed to a troubling trickle. By combining an intricate stat-boosting system with fast-paced dungeon crawling and then bolstering the game with powerful customization tools, ClaDun x2 is a fitting swan song for the beloved portable. Hopefully, gamers will continue to see the same type of unconventional titles on Sony’s next system. 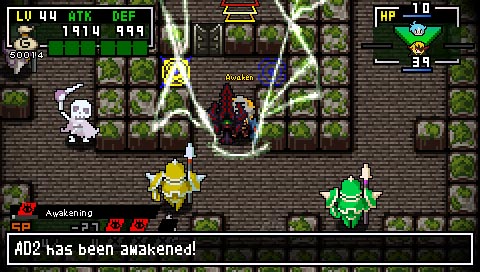