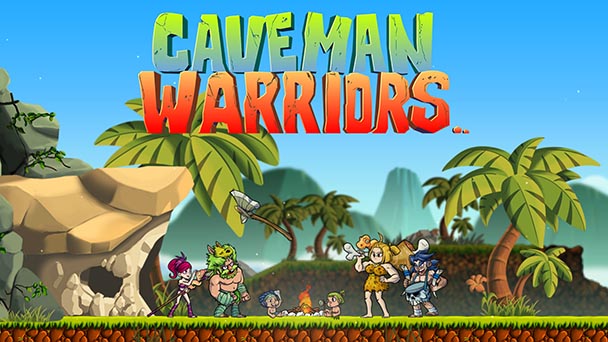 While players might associate platforming games with plumbers and hedgehogs, the genre has a disproportionate number of entries that take place in prehistorical eras. From B.C.’s Quest for Tires, Joe and Mac, Chuck Rock, Bonk, and even Radical Rex, developers want us to believe that our hunter-gather ancestors were also exceedingly proficient at jumping. That argument endures with the recent release of Caveman Warriors, which depicts a family of Neanderthals attempt to rescue their two youngest members from the clutches of extraterrestrials.

Following a single-screen set of comic book-styled panels that establishes the premise, participants select which of the four family members they’ll play as. In execution, the initial selection is of little significance, as a press of the controller’s bumpers instantly cycles through each cave dwellers. Whether you approach Caveman Warriors as an individual or with a team of three additional partners, the result is the same- you’ll likely be goaded into shifting characters. 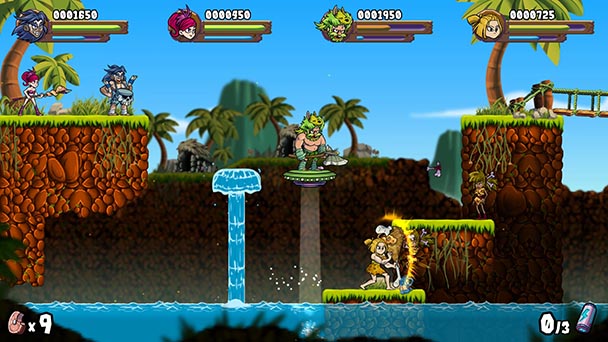 Like The Lost Vikings, each of the Caveman Warriors has their own aptitude. The burly, bearded Jack, can charge up power and break though obstructions, while Brienne, creates a shield that will repel most projectiles. Lilac-haired Liliana is adept with a spear, which can be thrown at come walls to create a makeshift platform, and Moe can summon a monkey that can distract nearby enemies. Unsurprisingly, special abilities can’t be spammed endlessly, with a gradually refilling stamina gauge ensuring restraint.

Given this assemblage of abilities, there’s are two ways for solitary players to approach Caveman Warriors. Since forcing the screen to scroll naturalizes threats and they are pushed past the perimeter, it’s often possible to brute force your way through stages, carefully avoiding the throngs of antagonists, shifting characters only when the game demands it. Or you can play Warriors at a more measured pace constantly changing characters to suppress each threat, prudently making your way through each stage. 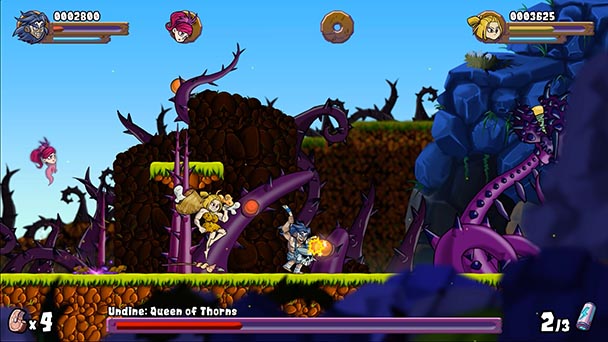 When adding local participants, Caveman Warriors feels remarkably different when each additional partner is added. With two players, it’s fairly easy to easy to find a groove, working together to eliminating threats and make headway. With three or four people, the toughest impediment is not getting lost in the flurry of on-screen activity, as the team of cavepeople become a whirlwind of leaping bedlam, annihilating almost everything in their path.

While Barcelona-based developer JanduSoft ambitions for arcade action that can accommodate individuals to quartets are undoubtedly lofty, there are also some issues with the approach. Whereas some of the genre’s best titles nurture a sense of exploration and experimentation, Caveman Warriors does little to cultivate those qualities. Sure, there’s the occasional veiled object that can restore health and Mario Bros.-esque secret passages, but largely the motivation is about getting to the next stage rather than investigating the nuances of the level you are on. 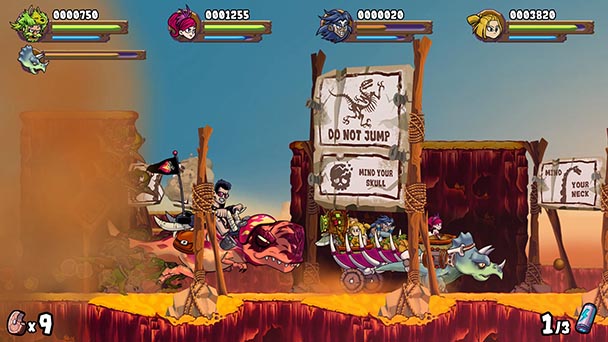 To its credit, Caveman Warriors does offer variety, with vehicular sections that pay homage to the types of deviation popular during the 16-bit era. But largely, the game never comes close to nailing the exhilaration and sense of wonder fashioned by say, Nintendo’s Research and Development divisions. There’s a sense of mild amusement as you tackle the game and grab collectables to open additional stages, but the feeling of enjoyment never grows more intense than a simmer. Yes, there’s challenge, but largely Warriors is lacks a feel of wonder, since almost every threat and obstacle have an obvious solution.

Certainly, there’s bound to be grievances with some of Caveman Warrior’s other design decisions. Getting hit by an enemy or projectile triggers a large amount of knockback, and if you don’t push the analog stick to right yourself, can easily send your Warrior into other dangers. Some might not appreciate the game’s challenging platforming, which starts tough and continued to get tougher. On the upside boss battles can be entertaining, even if the developers telegraph weaknesses a bit too overtly. 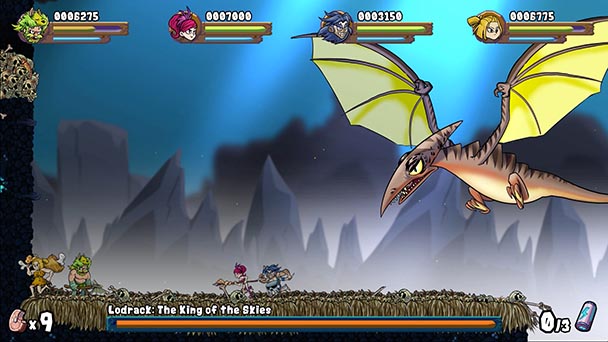 Platform Comparison
On a modest PC with even an older GPU, Caveman Warriors has no difficulties maintaining a sixty frame-per-second output. With a multitude of resolutions, and a v-sync option, the title does offer baseline adjustments and extends an effective default set-up. On the Nintendo Switch, the game targets and consistently meets a thirty-frame benchmark, with the halved output having little impact on playability.

What does tarnish the proceedings is the forced inclusion of rumble, which in execution, produces an annoying and audible buzz that can’t be turned off in-game. On the upside, the Switch version easily scales for groups, with characters easily seen on the hybrid’s diminutive 6.2-inch screen. With only a single Pro Controller, the detachable JoyCons make it relatively easy to initiate a communal game experience. 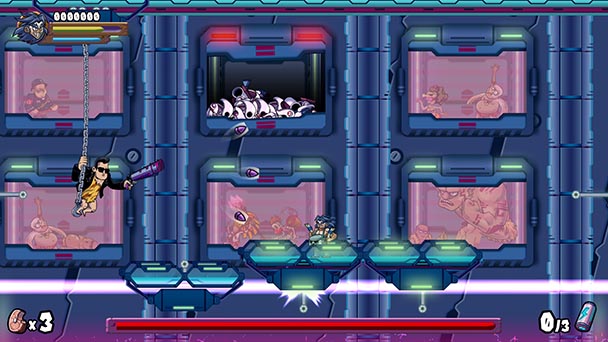 Visually, Caveman Warriors is effective, yet simplistic. While character models are detailed, animations are limited, making the title resemble a Flash-based game. While the inclusion of parallax-scrolling is welcome, the game’s attempt a depth-of-field perspective makes the rear layer a bit too blurry. On the upside, there is a pleasing amount of visual diversity, with stages that offer a multitude of milieu. For others, references from everything from Metal Slug to Terminator 2: Judgment Day might make for amusement. Sonically, Warriors offers a collection of upbeat but inoffensive songs to complement your prehistoric trek

While a middling experience for an individual, Caveman Warriors improves when one or two participants are added. Although it’s not nearly as lively as a session of say, New Super Mario Bros. Wii or even the Trine series, the game does succeed in offering an elevated level of challenge. But for many, that won’t be a strong enough incentive for procuring this prehistoric platformer at full price.

Caveman Warriors was played on the PC and
Nintendo Switch with review code provided by the publisher.

Caveman Warriors
Platform:
PC, Nintendo Switch, PlayStation 4, and Xbox One
Developer: JanduSoft S.L.
Publisher: JanduSoft S.L.
Release date: September 22nd, 2017 (PC), December 5th (Console)
Price: $14.99 via Steam, eShop, PlayStation Store, or Xbox Games Store
Difficulty: Moderate to Hard
Caveman Warriors review
While players might associate platforming games with plumbers and hedgehogs, the genre has a disproportionate number of entries that take place in prehistorical eras. From B.C.&rsquo;s Quest for Tires, Joe and Mac, Chuck Rock, Bonk, and even Radical Rex, developers want us to believe that our hunter-gather ancestors were also exceedingly proficient at jumping. That argument endures with the recent release of Caveman Warriors, which depicts a family of Neanderthals attempt to rescue their two youngest members from the clutches of extraterrestrials. Following a single-screen set of comic book-styled panels that establishes the premise, participants select which of the four&hellip;

Summary : With the best platformers, stages are invigorating, and you’ll want to enjoyment to endure. With Caveman Warriors, the levels can be fun, but you’ll find yourself all too eager just to get the finish them. You’ll likely wish the game favored the journey over the destination.

Previous: Tower 57 review
Next: A Hat in Time review