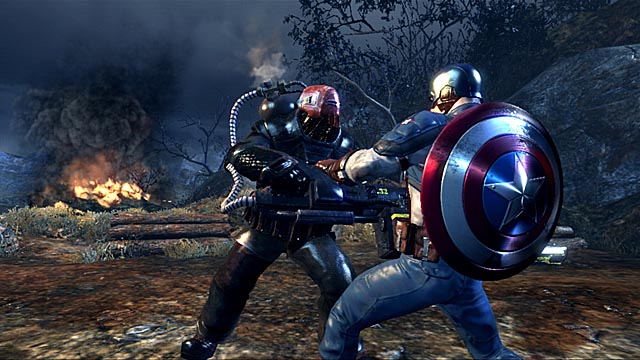 The plight of the movie tie-in game is a tragically familiar one. Typically given an abbreviated development cycle, culminating in a product forced to coincide with a film’s release, the corresponding interactive adaptation can often feel rushed. Although recent release, Captain America: Super Soldier ultimately succumbs to this distressing trend, the game’s enjoyable fisticuffs and suitable storyline elevate the title past most of its super-heroic peers.

Undeniably, Super Soldier‘s inspiration was Rocksteady’s Batman: Arkham Asylum. From combat which favors the vigilant study of enemy attacks rather that button mashing, to a single, sprawling context, Next Level Games recognized the suitable muse to follow. Cleverly, the developers evaded the temptation to reconstruct the plot points of upcoming film, Captain America: The First Avenger, instead delivering a narrative around Steve Rogers’ storming of Arnim Zola’s castle. As a setting, the outpost has all the requisites of a classical fascist fortress. From burly, mechanical doors which pour out processions of Hydra soldiers, to a labyrinthine layout which sporadically masks which is a largely linear adventure, the castle’s sole flaw is the overuse of bland textures. 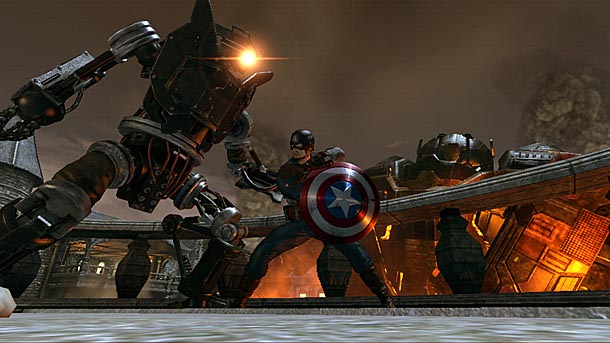 To motivate players to scour every recess of Zola’s lair, Next Level packed the stronghold with collectables. Beyond movie reels which unlock short animations, and intel documents which endow Rogers with the currency essential to expand his arsenal, smaller trinkets abound. From Prussian helmets, bejeweled eggs, beer steins, and statutes, it’s clear Hydra was heart-set on amassing the world’s largest assemblage of knick-knacks. Apparently, Cap’s collection efforts is able to help finance the Allied war effort-  as the amount of time spent stockpiling can sporadically outweigh the quantity of combat.

Yet once a fight ensues, Super Soldier shines. With a shield capable of Sam Fisher-esque marked takedowns, stunning swaths of enemies, blocking electronic prods, or even reflecting lead back at a snipers, controlling Captain America feels spot on. Balancing acrobatic maneuverability with muscle, Rogers is able to lithely sidestep groups of foes, strategically striking attackers with the occasional single-hit takedown. One testament to the  quality of the combat- the game’s fighting remain exciting through its five hour duration. 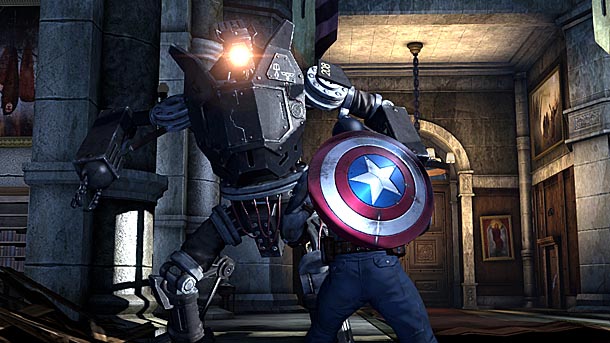 Unfortunately, moving across some of the game’s platforming section doesn’t feel as involved. Periodically, Cap will have to navigate across a trail of jumps and elevated beams, recalling the environmental architecture of the Prince of Persia series. Although our hero traverse each passage with gymnastic poise (using the ‘A’ button to rhythmically move to the next structure), there’s never any danger of falling. As such, blind button mashing can get players through these sections, turning these segments of Super Solider into a missed opportunity.

While Captain America’s framerate never veers into unplayable territories, it is perpetually shy of delivering fluidity- especially during the in-engine cutscenes. Herein indicates the title’s great hindrance- with an additional year or so of polish, Super Soldier could have rivaled Arkham Asylum. Without this extra period of optimization, the title’s textures are uneven, unstable barrels fail to explode with truthful physics, and environmental redundancy abounds. Neither of these blemishes completely ruin Captain America, but they do signify the title was hurried to the marketplace. Sonically, First Avenger star Chris Evan doesn’t an admirable job of bring Cap to life with a capable voice acting, complemented by the game’s cinematic orchestral pieces. 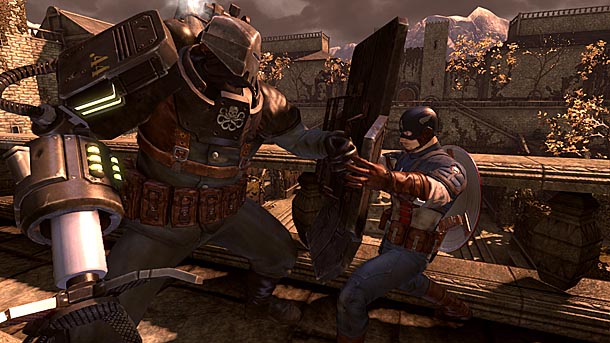 Triumphing over Thor: God of Thunder and Green Lantern: Rise of the Manhunters, Captain America: Super Soldier surrenders a succinct and enjoyable burst of summer action. Although the title can’t compete with the pantheon of superhero game (such as Arkham Asylum and The Incredible Hulk: Ultimate Destruction) as a day-and-date release, Cap does an admirable job of delivering quick, transitory thrills.