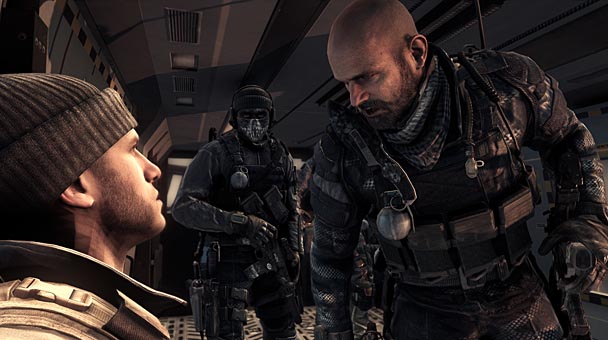 In retrospect, the Call of Duty franchise is fated to be remembered as one of the mainstays of the seventh console generation. Since the inaugural console entry, 2005’s Call of Duty 2, launched alongside the Xbox 360, a procession of annual follow-ups catapulted the series to success, with sales surpassing the 100 million mark. This proliferation of titles plumbed the major American conflicts- from World War II, Vietnam, and the Cold War, culminating in an imagined engagement between the U.S. and Russia across a trio of Modern Warfare titles. Continuing the foray into the future which propelled Black Ops 2, Call of Duty: Ghosts offers a curious hook- thrusting players into the role of desperate underdogs.

Ghosts’  script was authored by Rules of Engagement and Traffic scribe Stephen Gaghan, who provides a serviceable prologue. The game’s opening level is set on an orbiting space station, a sequence which serves as the game’s customary control tutorial. The stage also imparts the game’s impetus- as players witness a hostile takeover of the outpost and subsequent obliteration of many major cities. While a jump cut spanning the length of a decade keeps the pace quick, it also creates a number of unanswered questions about the game’s underdeveloped lead antagonist. Woefully, the rest of Ghosts’ narrative does little to answer these questions, which undermines the game’s gravitas. 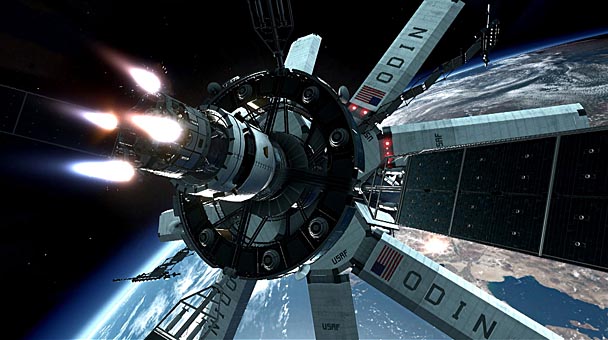 Similarly, the backstory behind the game’s opposing force, a conglomeration of South American countries called The Federation, is anemic. How the group amassed such as prolific arsenal and their place within the larger geopolitical system is only hinted at. Instead, Call of Duty: Ghosts’ expositional elements focus on the intimate. Taciturn protagonist Logan, his loquacious brother Hesh, and their military commander father, Elias, provide a trio which delivers more poignancy that the franchise’s typical hard-boiled military men. Likewise, Riley– Ghosts’ much publicized companion canine, is adeptly characterized- giving a plaintive whimper or aggressive growl that’s just as evocative as any piece of voiced dialog. The stalwart German Sheppard is dutifully motion captured as well, slinking up staircases or lunging at opponents realistically. The stealth-based moments where the game relinquishes the leash and allows players to control Riley are immensely enjoyable and help to counterbalance the title’s frantic firefights.

Gunplay has always been Call of Duty’s virtue, and with Ghosts, ballistic battles are wonderfully visceral. On the Xbox 360, the game’s combination of a fluid sixty frames-per-second deliver, low-latency input, and generous amount of auto-aim assures that players feel like unstoppable badasses, as they are able to sinuously eliminate bands of enemies. Fans of Duty’s multiplayer component should appreciate the addition of a knee slide, the ability to scramble over squatty objects without losing momentum, and a contextual lean- all of which make tactical movement feel just as crucial as marksmanship. 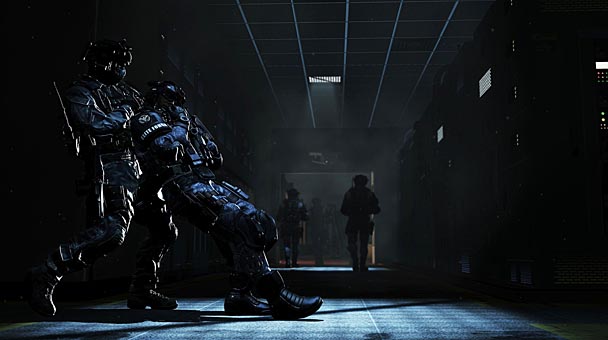 Regretfully, the infrequent glitch can sully the satisfaction of combat.  As with previous entries, it’s not unusual to see AI partners ignore adjacent tangos, or the occasional moments where foes respawn incessantly. Even worse is the occasional bug which prohibits players from triggering in-game events, which force players back the previous checkpoint. Across the title’s eighteen-stage campaign, I had to restart three times.

One of the virtues of Black Ops 2 was the customization which developer Treyarch added to the game’s already rich multiplayer component. For Ghosts, Infinity Ward trumps their cohorts, allowing for matches with an amazing amount of freedom. The title’s new Create a Soldier system is the foundation for flexibility, allowing gamers to create a squad of ten characters, choosing from an array of different head and uniform types. Notably, the game now allows for the construction of female soldiers. Like the rest of the Ghosts’ creation options, differences are only cosmetic. Black Ops 2’s Pick 10 system receives a significant revision, and now offers a Perk Points system. Now, abilities are weighted, allowing for a small number of dominant perks, or a large number of less influential aptitudes. Although the adjustments sounds minor, it’s a pleasing addition which allows for gamers to build a soldier around their playstyle instead of forcing them to acclimate to an preset one. Kill Streak packages can be determined in a similar manner, allowing players to risk access to devastating weapons at the cost of perilous high kill counts. 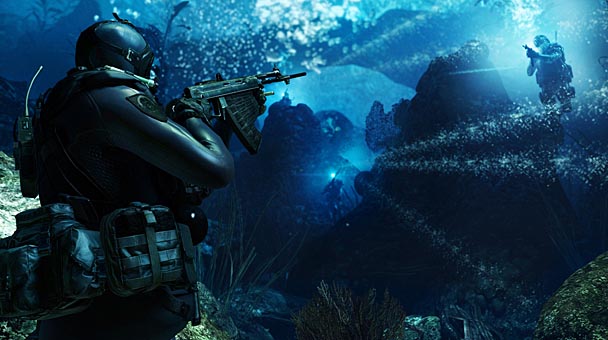 Traditionally, there’s been a gap between Call of Duty’s militaristic verisimilitude and the goofiness of multiplayer matches. Ghosts’ escalates that divergence further, resulting in a number of preposterous but pleasing play modes. Cranked merges the traditional Team Deathmatch with the contrivance of the Jason Statham films. Here, kills give players thirty seconds of adrenaline boost, but if they don’t slaughter another player in the duration, the combatant explodes. Grind offers a variation on Kill Confirmed where gamers are required to deposit collected dog tags on one of two banks on each map. Altogether, Ghosts’ returning and new multiplayer modes push players towards teamwork; gamers who identify and prioritize the needs of their crew gain a nice advantage. Bridging the gap between Ghosts’ single and online modes, Squads delivers an appealing number of competitive options. Areas can be filled with AI bots and human opponents; what’s remarkable is that the behavior of CPU-controlled character is nearly indistinguishable from real people.

Co-operative based Extraction mode play out like an amalgam of Black Op’s Zombie modes and the Left 4 Dead games. During this mini-campaign, up to four players take on groups of aliens- who move much quicker that Zombies’ lurching undead opponents. Before tackling a map, players must choose certain skills, which naturally can be augments during play. Success is achieved through both close communication and complementary roles, endowing the game mode with a pleasing strategic element. 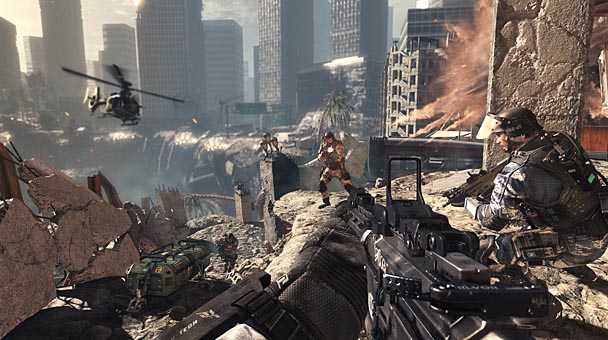 Collectively, Call of Duty: Ghosts’ provides the franchise’s customary collection of engaging components. Yet, except for the game’s fastidiously polished multiplayer matches, each element doesn’t quite topple past successes. The game’s campaign provides the expected action-packed set pieces, but these sequences are often over too soon; the game’s hyped underwater, space, and Riley- incorporated sections feel fleeting. Meanwhile, Ghosts’ supplemental are enjoyable, but lack the intensity of certain Spec Ops missions over Zombie mode. That’s not to say that to say that Call of Duty: Ghosts’ isn’t gratifying. It’s a great game that doesn’t quite match the accomplishment of its ancestors.

The Xbox 360 version of Call of Duty: Ghosts was provided by the publisher for review.

Call of Duty: Ghosts Review
In retrospect, the Call of Duty franchise is fated to be remembered as one of the mainstays of the seventh console generation. Since the inaugural console entry, 2005&rsquo;s Call of Duty 2, launched alongside the Xbox 360, a procession of annual follow-ups catapulted the series to success, with sales surpassing the 100 million mark. This proliferation of titles plumbed the major American conflicts- from World War II, Vietnam, and the Cold War, culminating in an imagined engagement between the U.S. and Russia across a trio of Modern Warfare titles. Continuing the foray into the future which propelled Black Ops 2,&hellip;

Summary : The law of diminishing returns has finally caught up with Call of Duty. While Ghosts is a commendable package, the game doesn’t offer an advancement over its predecessors.