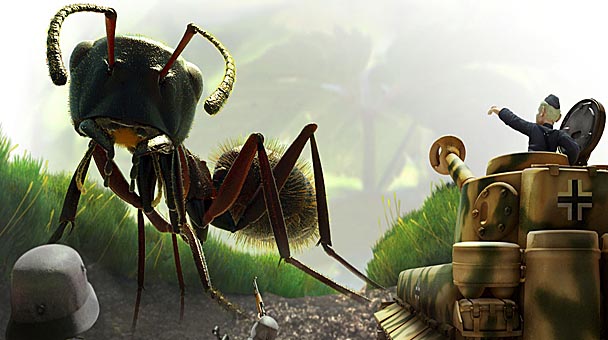 In the annals of video game history, armored vehicles have played a substantial role. Atari’s coin-op Tank was released in 1974, inspiring a battalion of similar playing titles, including the company’s perennial 2600 pack-in, Combat. In 1980, the company unveiled Battlezone, where a vector graphics display transported the treaded terrors into a three-dimension arena. During the ‘90s, the perspective shifted skyward again, as polygonal predators powered titles such as Return Fire and Mass Destruction. However, during the last few years, the tank’s amalgam of mobility and firepower seemed to have fallen out of fashion, with guest spots in the Battlefield series and Namco’s middling Tank! Tank! Tank! serving as the chief depictions of turret-and-treaded warfare.

Bugs vs. Tanks!, the latest entry in the Guild02 series of games, demonstrates that designer Keiji Inafune (the Mega Man series, Soul Sacrifice) still has a perchance for the armored attackers. Although players might instinctively assume that the game apes the B-movie vibe of Earth Defense Force franchise, in execution Bugs vs. Tanks! lacks the playfulness of Sandlot/Vicious Cycle’s campy insect extermination series. 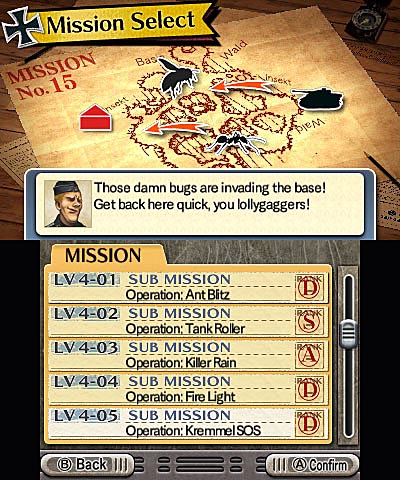 That’s not to say there isn’t absurdity in the title- you are commandeering a division of German forces who have purportedly been shrunk to diminutive size by allied forces. There’s no mention of Nazis or Der Fuhrer, so we’ll have to assume that these are innocuous members of the Wehrmacht, doing their best to survive an onslaught of enraged ants, bees, mosquitos, termites, and moths. Although Bugs Vs. Tanks! is a action title, a substantial amount of dialog bookends each mission, as crewmen Ernst and Joachim detail the impetus behind each undertaking. While the concept of pocket-sized, World War II-era Germans fighting garden insects seems like a comical premise, Bugs Vs. Tanks! is tragically serious, squandering its narrative possibility.

So instead of gags about pests being “crazier than Patton”, Ernst and Joachim solemnly issue survivalist errands. Locating commodities, search and rescue detail, base defense, and the sporadic boss fight are the gamut of assignments. While this assortment of tasks might feel hackneyed to experienced gamers, the upside is that the game’s collection of twenty-nine missions (plus ten bonus levels) don’t require much strategizing. Pleasingly, the succinct design of each operation is ideal for portable play. Beyond adjustable difficulty levels, another selection radically changes how Bugs Vs. Tanks! is played: turret control. Manual mode tasks players with using the 3DS’s face buttons to aim a tank’s turret, with the ‘R’ button used to fire the cannon. Automatic mode places an unseen CPU-controller gunner in charge, allowing players to concentrate on navigation. 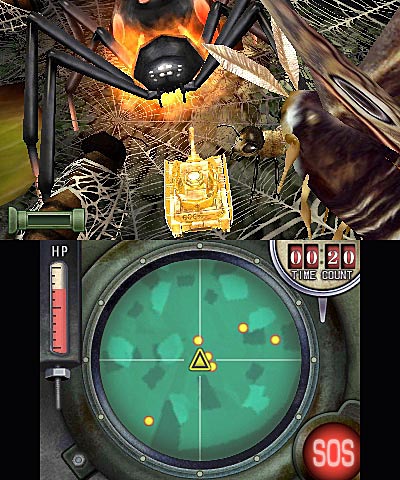 With the game’s selection of creepy-crawlies having a prominent place in the game’s title, it’s no surprise that the extermination of these pests is the title’s best element. Generally, the game requires players to carefully monitor the radar on the 3DS’s touchscreen, noting signs of nearby nuisances. Getting too close to a bug allows the enemy to shave off health, so gamers are encouraged to engage only when a shell is loaded in their tank cannon. As such, attacking isolated targets and maintaining a safe distance is the key to excelling at Bugs Vs. Tanks! Failing to follow these principles is apt to get players surrounded by foes.

Beyond these basic rules, a few other decisions may influence player success. Gamers can use the SOS command to issue up a devastating artillery strike by touching the bottom screen. Typically, this power is restrained to a single use per mission, but Street Passing another Bugs Vs. Tanks! purchaser can increase that limit. As gamers endure, they’ll gain access to an assortment of new chassis, turrets, and skins. The first two parts can be mixed and matched for a statistical upgrade, allowing for a bit of battle tank bricolage. Players with a Guild series save file on their SD cards even gain access to a special gilded tank. 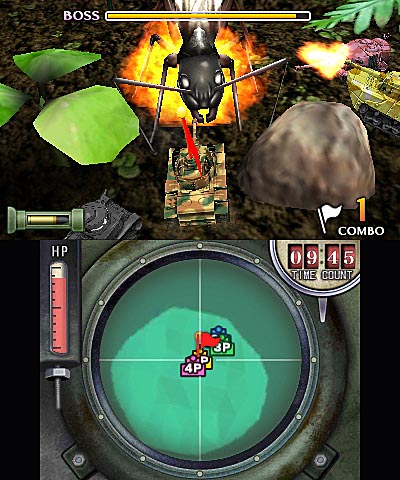 Visually, Bugs Vs. Tanks! runs at a smooth framerate, which isn’t unexpected given the game’s modest visuals. While insects and mechanized vehicles are drawn with care, other environmental details are a mixed bag. One early mission asked me to collect water droplets. Minutes passed with no sign of the resource and frustration grew until I ran into an object which looked like a pebble. This entity turned out to be one of the dewdrops I was searching for, obscured by a shoddy rendering. While the latter half of the game offers several interesting milieus, the first half recycles the same assets, making a substandard first impression.

Beyond the game’s single-player campaign, groups of up to four gamers can take on Bugs Vs. Tanks! local cooperative level. These fifteen stages increase the insect count, but also allow players to shift enemy concentration, so that bugs chase a specific combatant. Regretfully, this component requires each participant to have their own downloaded version of the game, making collaborative play unlikely for all but the most adamant team of critter killers. 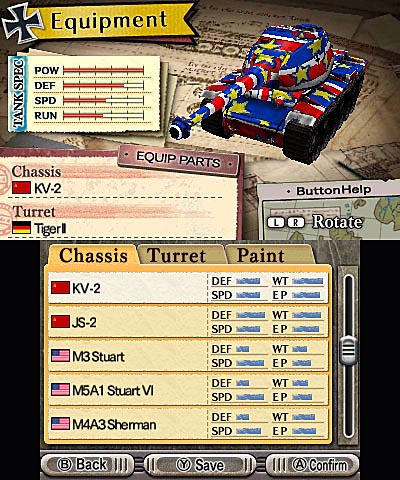 At its best, the tank-based game conveys a sensation of being a well-protected powerhouse, annihilating any aggressors who stand in your way. Regretfully, Bugs Vs. Tanks! doesn’t quite articulate that sensation, with most  insects curling up into carcasses only after numerous shots. Classic games like T.N.K III and Iron Tank worked because vehicular weaponry felt powerful and enemies were abundant. I would have gladly swapped Bugs Vs. Tanks! protracted conversations for a few more foes onscreen. As such, players might want to wait for sale before enlisting for this bug hunt.

Bugs Vs. Tanks! Review
In the annals of video game history, armored vehicles have played a substantial role. Atari&rsquo;s coin-op Tank was released in 1974, inspiring a battalion of similar playing titles, including the company&rsquo;s perennial 2600 pack-in, Combat. In 1980, the company unveiled Battlezone, where a vector graphics display transported the treaded terrors into a three-dimension arena. During the &lsquo;90s, the perspective shifted skyward again, as polygonal predators powered titles such as Return Fire and Mass Destruction. However, during the last few years, the tank&rsquo;s amalgam of mobility and firepower seemed to have fallen out of fashion, with guest spots in the Battlefield&hellip;

Summary : The combination of Inafune and oversized insects sounds like a surefire hit, but Bugs Vs. Tanks! is a bit of a misfire.

Previous: The Everyday Tales of a Cat God Complete Series Premium Edition Review
Next: Podcast 13-2 Two and Half Graymers