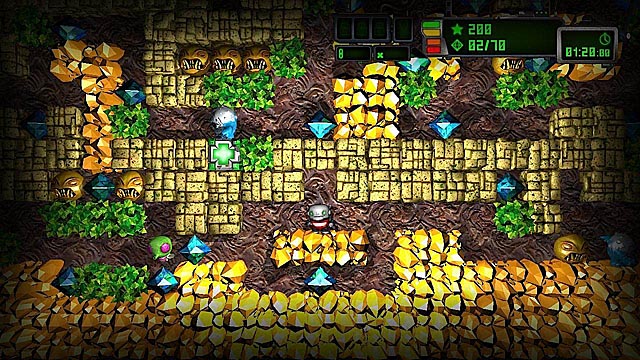 What is the concept? XL is a loyal reimagining of First Star Software’s, Boulder Dash– a title which proliferated across  nearly every popular computer and console platform during the mid-eighties. At its core, players guide one of two separate robotic protagonists through a robust succession of stages, collecting enough diamonds to open a level’s egress. Adversity stems from not only from foes who wander through each subterranean environment, but from each level’s battalion of boulders. Each of these substantial stones seems to be precariously placed by the game’s devious level design, forcing players to not only think about each subsequent move, but often prompts a impromptu sprint past a succession  of plummeting rocks.

The original game successfully captured the uneasiness of spelunking exceedingly well, with unsteadily balanced boulders able to topple from an adjoining excavation. Here, the game’s Retro Mode captures the entrancing anxiety marvelously, reminding modern players of the difficulty of elder titles. Those seeking a more relaxed excursion may take solace in the game’s Arcade Mode, which spreads its challenge across a hundred gradually more demanding stages. Puzzle Mode is it own beast, favoring rationality over reflexes, as players analyze each conundrum. Once any level is cleared, it is available for replay in Zen Mode, which allows gamers top explore each stage without the worry of a timer. 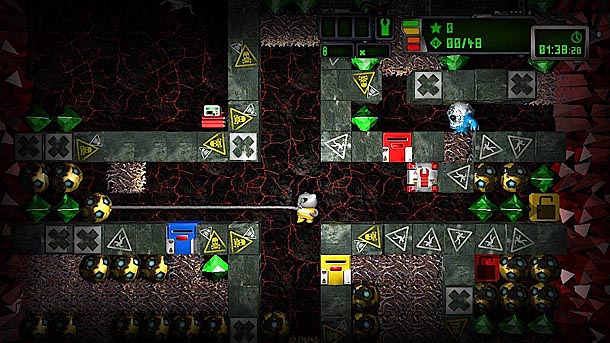 Would I enjoy the game? Fans of diversions which straddle the junction between brainy puzzler and arcade-oriented game should enjoy Boulder Dash-XL‘s mechanics. For gaming veterans old enough to recall the original title, this follow-up includes a number of new nuances. From being able to dig out adjacent squares (without moving) with a press of the A button and pull of the right stick, a telescopic arm, and even leaderboards for each level, Boulder Dash XL isn’t a effortless rehash.

What are the game’s strengths? Between the title’s quintet of modes, XL offers a delicious amount of variety. Like many games which draw inspiration from older amusements, Boulder Dash’s mechanics and modes are each effortlessly learned, allowing players to jump right into the title without exertion. For players stuck on a particular puzzle, the ability to play another game variation is a welcome addition. Additionally, the game’s bite-sized stages lend themselves to compulsion; each level enticing players to persevere a bit longer. 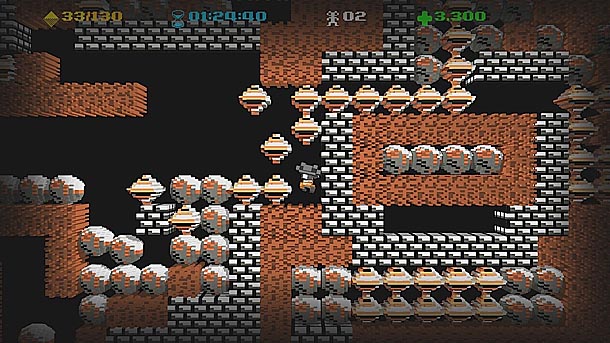 What could have been improved?  For many, Boulder Dash-XL‘s visuals may recall the minimalism of a Xbox Indie title. Although the game’s title set has been redrawn in high-resolution, with a vibrant color set, the redundancy of environmental objects reveals the game’s twenty-seven year old roots. Worse, the game’s protagonists, Rockford and Crystal are depicted as squatty, bizarrely animated machines, rather than the lithely dashing sprite of the original game. Sonically, the level countdowns and ‘charge’ fanfares become irritating after just a few minutes; developers Catnip Gamers seems hell-bent on punishing the marathon player.

Is it worth the money? With over 150 levels to unearth and a healthy selection of leaderboards which invite competition, Boulder Dash-XL offers a solid amount of content for its ten dollar price. As long as players are able to look past the title’s stark exterior, they’re likely to find a unpolished gem within. Admirers of the original game have an obligation to give this new iteration a methodical appraisal. 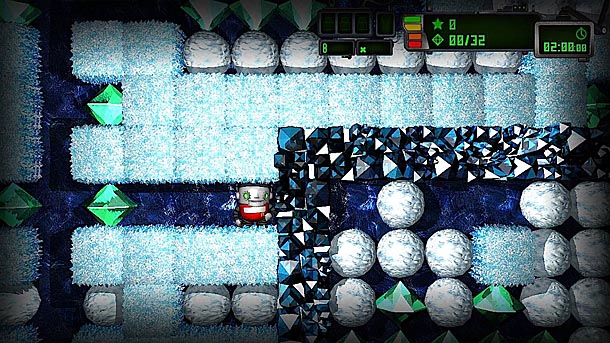