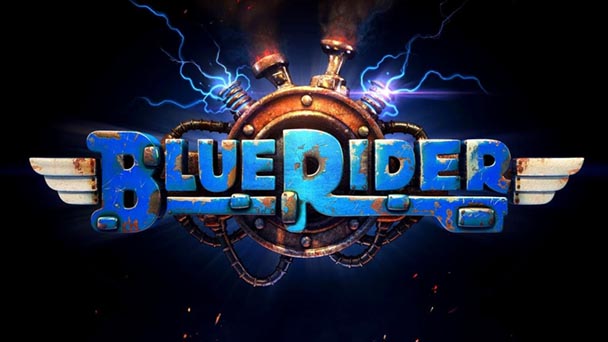 The combination of publisher-backed titles, remakes, and indies means that it’s often hard to keep up with the persistent barrage of new releases. Case in point: when Blue Rider was released on the PC and PlayStation 4, we completely overlooked the title. But with the game’s recent digital distribution across Asian territories, we were able to amend that omission- discovering an accessible arcade shooter than might just interest fans of the genre.

With a diminutive 800-megabyte footprint, Blue Rider signals its succinctness. Beyond displaying the button layouts for mouse or joystick control and options to adjust output resolution, visual quality, and mouse sensitivity, players will likely hit the battlefield promptly. Blue Rider is unapologetically old school, letting its title convey the bulk of exposition. 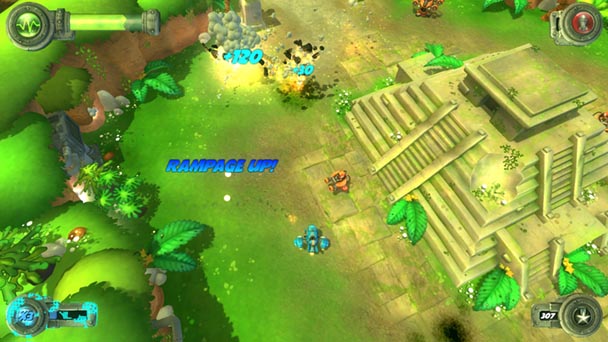 Indeed, you control a blue ship. But you’ll be doing no literal running. Instead, your craft floats above the surface, using the left stick on your controller or the WASD keys to glide across the battlefield. Initially, you’ll have to adjust to the sense of weight, with the vessel exhibiting a bit of momentum when moving about.

Horizontal mouse movement or the right stick rotates your surroundings, with Blue Rider calling the concluding Namco and Atari collaboration, Assault. In execution, it feels like you are spinning the entire world, rather than your ship, but it’s hardly as off-putting at it sounds. Within second, the control scheme feels natural, as your direct Blue Rider through the game’s brightly-hued and soft-cornered collection of ten stages. 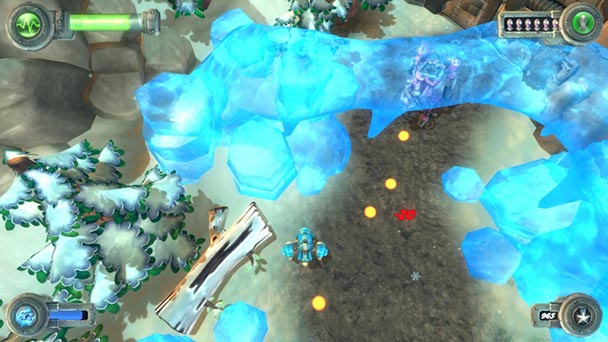 There’s also no dedicated tutorial, with the title throwing a few light adversaries at players at first. Early enemies resemble corpulent men in hazmat suits, each carry guns with different numbers of barrels. Naturally, lesser foes shoot a single pellet at players, with elevated enemies will output a multiple of scattering projectiles. To subdue them, you have two upgradeable guns that offer a piercing blue laser or orange spread shot.

Periodically on each level, you’ll encounter a weapons depot, that when destroyed, release an alternating power-up that will augment either weapon, Raiden-style. Pleasingly, your ship also carries a limited number of bombs that also can be upgraded, eventually launching a salvo of homing missiles that are indispensable when you’re in a bind. One last bit of support in found in occasional AI drone that dutifully follows the player, peppering any adjacent adversaries with fire. While Blue Rider’s arsenal isn’t expansive, a persistent procession of upgrades help to enliven the journey. 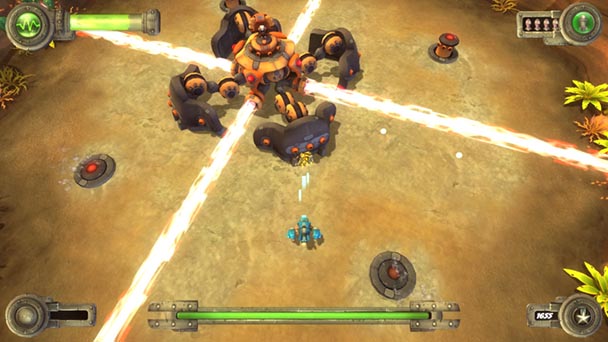 Two other elements that invigorate the title are the variety of enemies and the game’s settings. Persevere through the stages and foes becomes more formidable, outputting more bullets and absorbing more damage as they begin to flock in larger groups. Stages are punctuated with boss battles that ensure players have squirrelled away an ample amount of health and bombs. Although enemy drops help to replenish your supply of each, Blue Rider extends only a single life and offers no mid-level checkpoints, making dependence on either especially imprudent. When the big baddies are confronted, showdowns with these monstrosities are undoubtedly one of the high points of the game. Here, players will definitely have to acquire an attack strategy that usually involves handling lesser threats while dealing out damage to the boss. Pleasingly, they’re intense without being over frustrating or cheap.

But that’s not to say that Blue Rider is completely free of irritation. Given the zoomed-in camera perspective, it’s not uncommon for off-screen enemies to fire at players, and when they do so from behind, it’s rather vexing. Later stages have elevated pathways, and when dodging a barrage of enemy bullets, it’s easy to occur damage by travelling to close to an edge. While the game targets sixty frame-per-second output on PC and PlayStation 4, rotating can produce minor judder, blemishing the experience. On both systems, minor frame drops can occur, especially when multiple defeated foes are going through their explosion animation. Some might wish for a map for some of the game’s more labyrinthine levels. Although unexplored areas are apparent by the presence of enemies, it can be easy to get disorientated when you’ve nearly cleared the whole map of opposition. 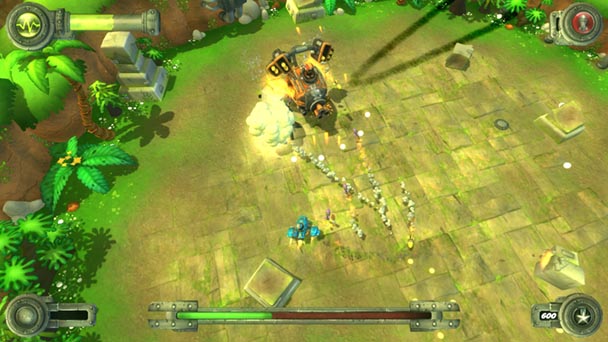 On the upside, Blue Rider is attractive, extending a cheerful color palette that right out of a cheery platformer. More interesting is the title’s milieus with stages displaying distinction, but with each offering a gentle transition into the subsequent stage. As such, Rider’s environments feel somewhat organic, shirking the divergent succession of stages evident in most shooters. Aurally, the game’s soundtrack aims to channel the technological toe-tapping of Daft Punk. While it never reached those lofty heights, the tuneful accompaniments are never tedious.

Blue Rider is an effective shooter, especially with a play mechanic that permits players to attack adversities from a variety of angles. While the no-frills delivery and a few displeasing niggles will irritate some players, both are easy to forgive when the title nails the essentials. If you’re like us and missed Rider the first time around, try to score out a sale; this shooter certainly oozes old-school vibes.

Blue Rider was played on the PlayStation 4
and PC with review code provided by the publisher.

Blue Rider
Platform: PlayStation 4, PC
Developer: Ravegan
Publisher: Ravegan/EastAsiaSoft
Release date: Sept 14th, 2016 (US), March 10th, 2017 (Asia), April (retail)
Price: $9.99 via PSN and Steam, retail $29.99 via Play-Asia
Blue Rider review
The combination of publisher-backed titles, remakes, and indies means that it&rsquo;s often hard to keep up with the persistent barrage of new releases. Case in point: when Blue Rider was released on the PC and PlayStation 4, we completely overlooked the title. But with the game&rsquo;s recent digital distribution across Asian territories, we were able to amend that omission- discovering an accessible arcade shooter than might just interest fans of the genre. With a diminutive 800-megabyte footprint, Blue Rider signals its succinctness. Beyond displaying the button layouts for mouse or joystick control and options to adjust output resolution, visual quality,&hellip;

Summary : Recalling Namco’s Assault (albeit without the tank controls), Blue Rider is a contenting shooter, where players can rotate the environment while they move about freely. While the game feels a bit bare-bones, the old-school action is certainly engaging.

Previous: EVE: Valkyrie review
Next: Atelier Firis: The Alchemist and the Mysterious Journey