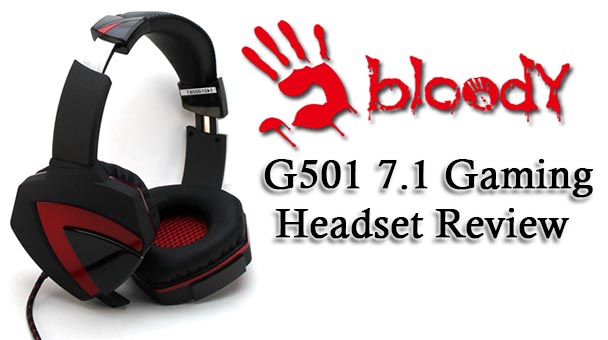 For PC gamers with unrestrained budgets, the purchase of an Astro A-50 or Turtle Beach Seven headset can offer an unrivaled sonic experience. But for players who’d rather spend their disposable income on a high-end video card, a more economical purchase might be merited. Peripheral manufacturer A4 Tech has demonstrated an ability to adeptly balance performance and economy with their line of Bloody-branded gaming mice. With the release of their G501 gaming headset, the firm hopes to duplicate that success by offering a Surround Sound-simulating headset that’s teeming with notable features.

Upon opening the outer cardboard box which houses the G501, gamers will find the headset firmly protected by a thin plastic clamshell. Like the Multi-Core Gun3 V7, the device ships with a quick reference guide but fails to include a disc for accompanying software. Although the peripheral was quickly identified on all of our Windows 7 and 8 machines as soon as the G501 was plugged into a USB port, owners will want to download the 34 MB Tonemaker application to take advantage of the headset’s advanced functionality. 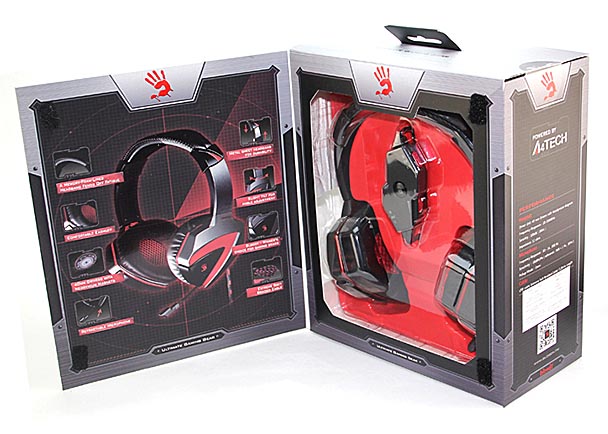 The setup guide warns users to disable their anti-virus software when installing Tonemaker (a directive that’s always a bit troubling). However, we experienced no false-positives with systems running AVG, Avast, or Ad-Aware. Since installation, Tonemaker hasn’t exhibited any conflicts with other applications and has been consistently stable, although some of the menu text became garbled on lower resolution laptap screens. Although the software has a 27.8 MB footprint, any processing burden is nearly imperceptible, using less than 0.5% of CPU power on a low-end rig.

Once Tonemaker is installed, the application allows for quick access through Windows’ notification tray. Clicking on the icon brings up the substantially-sized user interface, with the uppermost part of the screen serving as a gateway to the peripheral’s advanced feature set. Clicking on the Game button allows players to assign four different sound equalization settings, using software dubbed AudioMate. The idea here is not to just to add additional punch to the bass or elevate the highs of a sound mix, but to emphasize or mitigate specific in-game sounds. Geared toward first-person shooter enthusiasts, the pre-configured settings allow for the suppression of gunfire or the accentuating of footsteps. To accommodate for weapon variance and different varieties of sound effects, Tonemaker even allows players to tweak the acoustical setting further through traditional EQ levels. 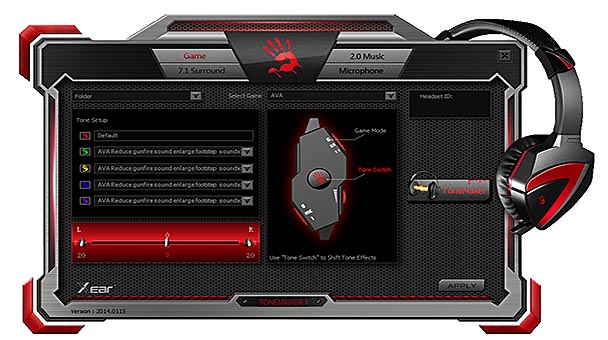 Expectedly, the advantage afforded to players is minimal. Since both footsteps and gunfire blasts have a sizable imprint on the sonic spectrum, AudioMate can’t work miracles. In execution, the result isn’t far off from karaoke programs which attempt to strip the vocal track from a song- the target sound might be subdued, but isn’t completely eliminated from the mix. We tried using Tonemaker with a variety of contemporary FPSs- from Battlefield 4, Call of Duty: Ghosts, and Insurgency with a team of three volunteers. After a few hours of play, most of the participants indicated that Tonemaker offered very little of an actual advantage in multiplayer games, but that the application would be fun to play around with. That said, each volunteer had little difficulty distinguishing original sounds from the Tonemaker’s processed effects outside of a heated online battle.

Thoughtfully, the G501 allows gamers to shift between four preprogrammed sound settings by using the headset’s in-line controller. A press of the illuminated button cycles between equalizations, with the Bloody icon changing color to indicate which processing method is being applied. Similarly, when the headset is in 2.0 Music mode, the button switches between preselecting EQ settings, allowing for users to adjust the sound mix to accommodate a dozen genres such as pop, rock, metal and even opera. Much like the AudioMate’s customization options, owners can further adjust the sound mix using a ten-track equalizer. 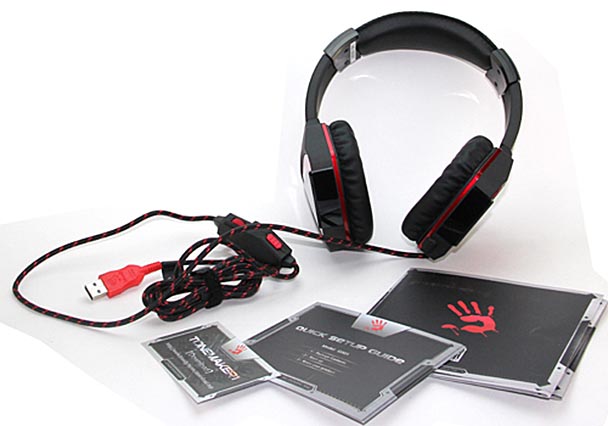 When the G501 is put into 7.1 Surround Sound mode, the Bloody button shifts between soundscapes, permitting players to control the size of the replicated acoustic environment and well as the volume of each simulated sound source. Although the headset lacks Dolby Digital licensing, spatial fidelity was comparable to similarly priced devices, divulging the location of incoming enemy fire in RAGE and Borderlands or the vicinity of nearby competitors in racing games like Need For Speed: Shift and DiRT 3. Whichever mode the G501 is in, sonic fidelity is solid, but certainly not awe-inspiring. Output favors the midrange, shirking the throaty bass and crisp trembles exhibited by top-tier products.

Pleasingly, the headset includes a pull-out, pliable microphone. Echoing the design philosophy of the peripheral’s in-line controller and braided cord, the mic is permanently connected to the unit. A4 Tech seems to prefer a consolidated device which eliminates the possibility of losing a crucial component. After misplacing several headset cables, we might have to agree with their stance. Although the physical reach of the microphone is a bit stunted, fidelity is respectable. Additionally, Tonemaker includes a voice-altering component, allowing players to pitch-shift their tones to sound like dragons, ducks, or even another gender. 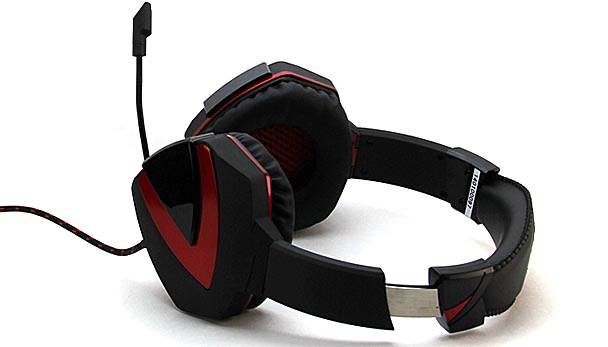 Build quality is certainly one of the G501’s virtues. Constructed of durable plastic, simulated leather and bits of brushed aluminum, the headset feels sturdy- likely able to survive a fall onto a carpeted floor. That said, the unit is comfortable to wear for long duration thanks to its reasonable 9.1 ounce (258 g) weight, cranial padding, and unconfined aperture. Persisting the A4 Tech’s aesthetic, the angular headset is crafted in a striking red and black combination, emblazed with the glowing Bloody logo on the left earcup. Although the peripheral carries a $99.99 USD MSRP, the unit can be found online for as little as $65. For PC players looking for an affordable headset, the G501 offer performance that comparable to the competition, elevated by a few application-based amenities.

Bloody G501 7.1 Gaming Headset
For PC gamers with unrestrained budgets, the purchase of an Astro A-50 or Turtle Beach Seven headset can offer an unrivaled sonic experience. But for players who&rsquo;d rather spend their disposable income on a high-end video card, a more economical purchase might be merited. Peripheral manufacturer A4 Tech has demonstrated an ability to adeptly balance performance and economy with their line of Bloody-branded gaming mice. With the release of their G501 gaming headset, the firm hopes to duplicate that success by offering a Surround Sound-simulating headset that&rsquo;s teeming with notable features. Upon opening the outer cardboard box which houses the&hellip;

Summary : Like Bloody’s line of mice, the G501 7.1 headset is a well built, functional device made alluring by the claims of its accompanying application. While you may not gain an acoustic edge on the competition, but you’ll find plenty of settings to fiddle around with.