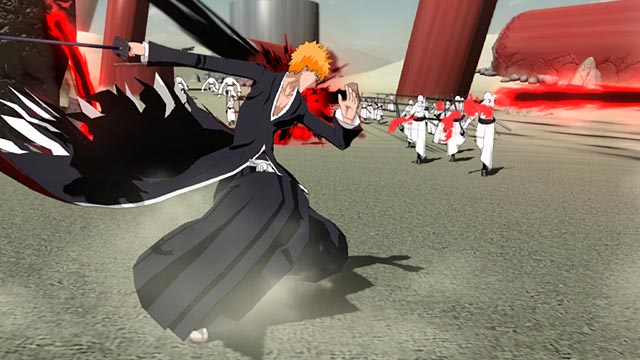 With a deft blend of action, comedy, and paranormal intrigue, it’s not surprising that Bleach has endured a faithful following across 51 manga volumes and 15 seasons of anime in Japan. In the U.S., Ichigo Kurosaki’s exploits have also garnered an impressive audience, thanks to the localization efforts of Viz Media and AdultSwim. Despite the stateside popularity of Bleach, only a handful of interactive interpretations have made it to Western shores, ranging from three middling fighting games to Sega’s DS-based tactical role-playing title.

NIS America’s release of Bleach: Soul Resurrección hopes to remedy the situation by delivering a nimble, action-oriented, interpretation of a Soul Reaper’s duties. Set amidst a expansive plotline which occurred during the tenth through fourteenth seasons of the anime, the 13 Court Guard learns that Sosuke Aizen was behind the plot to kill Rukia Kuchiki. Anticipating an assertive response from the Soul Society, Aizen creates a legion of Arrancars which jeopardize both the Soul Reapers as well as mankind. While diehard fans should certainly appreciate the developer’s faithfulness to Bleach canon, casual hollow hunters might be puzzled by the title’s allusions to key events. Fortunately, Soul Resurrección‘s combat and character customization are gratifying enough to please transitory admirers. 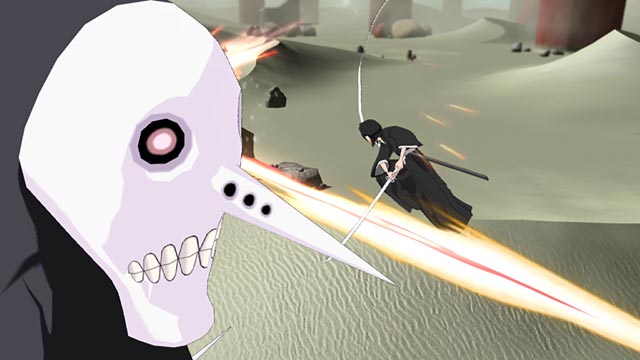 Unquestionably, Bleach’s fighting is bound to draw comparisons with Tecmo-Koei’s Dynasty Warriors series. On the surface, there are irrefutable similarities. Players brush through lesser enemies with a steady tap of the square button, while pushing the triangle key typically generates a ranged strike capable of bringing down airborne foes.  A press of the L2 button allows protagonists with a filled ignition gauge to summon an alternate, more formidable persona destined  to wreck sweet havoc. One example- Ichigo dons his visored mask to attack with Hollow-powered fury. A second press of the button discharges the meter, creating an devastating assault complete with a impressively animated cutscene. Unfortunately, this forceful strike can be so potent that it can strip away half of an end-boss’s health bar.

Yet, Soul Resurrección also deviates from traditional Musou mechanics. Holding down the R2 button allows protagonists to dash across land or sky, notably quickening the pace of the game. Contact with opponents or objects while racing around has a pleasing damaging effect, allowing players to ping-pong around the landscape converting items into Soul Points, the game’s currency. Delightfully, colossal pillars and the sporadic stone wall can be crumbled, although Bleach tends to keep players on a delineated, restricted path. However, the title’s greatest advancement is it’s upgrade system, which allows characters to augment their attacks into dominating onslaughts. 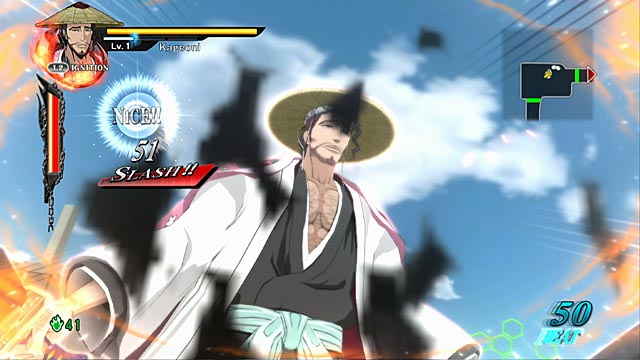 Using a grid-based system similar to Final Fantasy X, players use collected Soul Points to unlock buffs- from increased health, a sturdier defense, or even a more punishing attack when crashing into opponents. With additional bonuses awarded for quickly annihilating a swarm of antagonists, Bleach‘s leveling system provides players with an impetus to head back into the main campaign’s fourteen chapters. Of course, unlocking additional members of the Soul Reapers’ 21-strong roster is also a pleasing incentive as well. Once players complete the main component, Bleach also offers 28 side missions with specific conditions for success, as well as basic leaderboard support.

Visually, Soul Resurrección tries to hold a firm thirty frame-per-second framerate, only faltering when players destroy giant environmental objects directly in front of the player. Less impressive are the game’s backdrops, which recycle three different settings across the game’s duration. Despite the minimalism and redundancy of these milieu, Bleach‘s character design and animation are skillful, capturing the aesthetics of the anime. Pleasingly, the game allows for English or Japanese voiceovers, with characters delivering plot details, without slowing the action down. 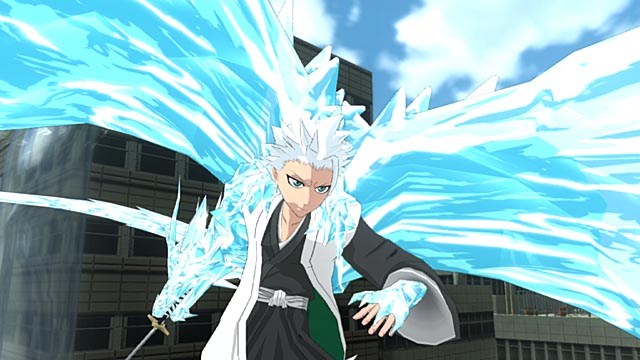 Although familiarity with Kubo-san’s work would certainly improve a player’s appreciation of Bleach: Soul Resurrección, it’s hardly a prerequisite for enjoyment. With intuitive controls, engaging action, and a solid hook to keep players coming back to Hueco Mundo, NISA’s first console-based action title is the rare anime-based game which succeeds at capturing the verve of its source material.