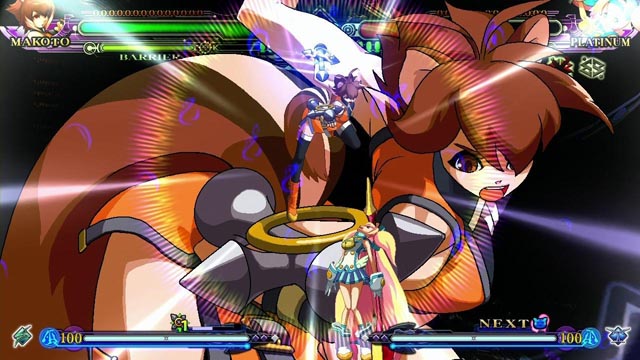 Typically, launch titles fall into two categories: simplistic diversions which scarcely surpass the definition of a tech demo, as well as quick and dirty ports of pre-existing titles. After being adapted for a variety of consoles and portables, Arc System Works’, BlazBlue: Continuum Shift Extend for the Sony Vita might seem to be an archetypical example of the second classification. In execution, the title marginally outshines its console counterpart, delivering extra characters, new content, and balancing tweaks gleaned straight out of Japanese arcades. For fighting game devotees looking to get their ‘rebels’ on the go, the title is a near-obligatory purchase.

Despite the efforts of a comprehensive tutorial and an optional, simplified control scheme known as “Stylish Mode”, BlazBlue’s erudite nuances are bound to be overlooked by casual fans. Although the title’s four-button combat might feel vaguely familiar, and rudimentary combos can be pecked out, the title’s multitude of sub-systems make Blaz one of the most technical fighters on the market. However, for determined players, the title possesses near-limitless depth. From mastering the game’s air juggling system to minding the defensive blocking gauge (known as the Guard Libra), there’s a near-overwhelming number of simultaneous mechanics in each match. Thankfully, there’s a moment when resolute players become cognizant of BlazBlue’s inner workings, justifying the time invested in each match. 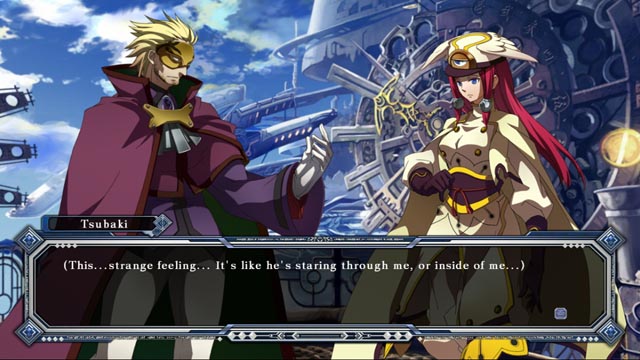 For those devoted disciples, Continuum Shift Extend offers up an elevated test of skill through the Unlimited Mars challenge, which pits players against a succession of insanely powered-up combatants. Far less grueling and exponentially more enjoyable is the inclusion of Abyss Mode- which endows BlazBlue with a light role-playing component. Tasking gamers with scrapping their way down chasms of selectable depth, players are forced to preserve on only a single life bar. Mercifully, success in battle recuperates health, with vanquishing particular opponents will reward gamers with a stat increase or special ability. Woefully, the recreational recruiting found in Legion Mode didn’t make Continuum Shift Extend’s final cut.

Fortunately, a number of agreeable small improvements did work their way into the Vita iteration. Booting up the title’s presents players with the game’s invigorating new intro, crafted by Production I.G (Kimi ni Todoke: From Me to You, Jin-Roh: The Wolf Brigade), which is accompanied by an infectious song courtesy of J-pop vocalist Faylan. With the inclusion of characters previously only available as DLC (Platinum, Makoto, Valkenhayn) as well as a new combatant named Relius Clover, BlazBlue’s nineteen-strong roster is as diverse as it is unusual. In addition to the supplemental storyline for each of the four new fighters, the title offers also offer summary for Calamity Trigger’s plotline. With a Rashômon-esque angle, Continuum Shift Extend’s central story is presented from the perspective of each character. As such, the title’s narrative is far better than the typical fighting game impetus, inspiring players to see another piece of the plot with each tournament win in Story Mode. 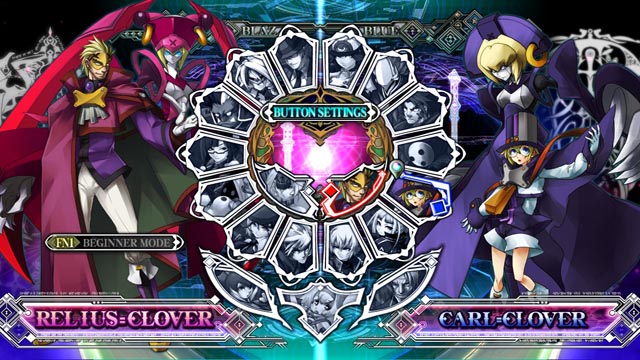 Amazingly, Continuum Shift Extend retains all the visual sumptuousness and animation fluidity of its console, brethren and looking even more stunning on the Vita’s OLED screen. For gamers hoping to immerse themselves in Blaz’s jubilant, hard-rocking soundtrack, a pair of headphones are a necessity, as the portable’s speakers produce a rather anemic output. Agreeably, gamers can switch between the game’s Japanese and English voice-overs, with both deliveries offering their own distinct, yet competent deliveries.

Although connectivity with the PS3 version of Continuum Shift was an expected feature, it’s nowhere to be found in the Vita release; hopefully cross-platform play will be patched in at a later date. Despite that omission, the title’s online is impressive, with options for two-on-two and three-on-three team battles (and even handicapped matches) as well as customary one-on-one skirmishes. Thankfully, the title’s netcode is reliably steady, exhibiting scant lag across an afternoon of heated matches. 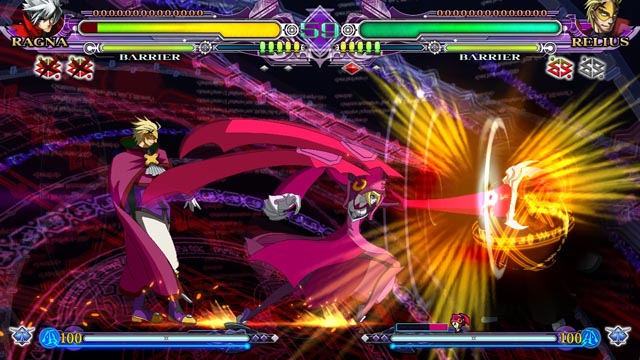 With the inclusion of supplemental characters, an array of engaging game modes, and faultless online component, BlazBlue Continuum Shift Extend is the definitive edition of the title. Although launch titles can lose their luster after a few week, there’s enough depth in Blaz to keep the ‘wheel of fate turning’ well past the next wave of game hits store shelves, as long at your left thumb holds up.