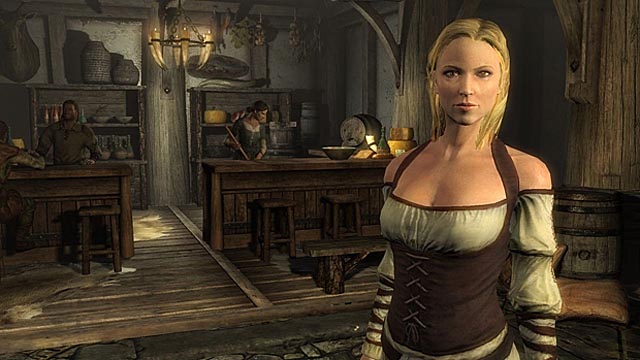 “Hey, we can use green again.  Such a relief after all the brown of the Fallout world.”  This was the joke the Bethesda folks used to open their presentation of The Elder Scrolls V: Skyrim at E3 this year.  They aren’t kidding- the preview opened with your character standing in the midst of a vibrant forest atop a high mountain, with every bush and tree leaf meticulously rendered.  Needless to say, the beauty of the title’s graphics are only rivaled by the splendor of Skyrim‘s vast scenery.

With a release date of November 11th, 2011, the latest addition to the Elder Scrolls series is definitely one of the most anticipated games of this year’s holiday season. Fans of the franchise have come to expect in-depth story elements, sophisticated character leveling, and an epic world that both taunts the player to delve farther than they would in other games and promises unexpected surprises throughout its valleys and peaks.  And we’re not just talking virtuous visuals. First off, there are dragons. 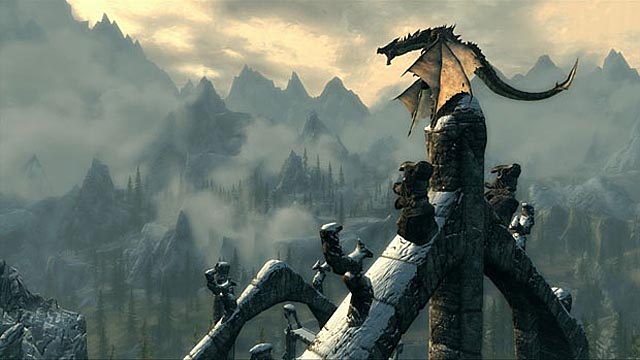 These dragon battles are so visceral that my only complaint is that I’m going to feel bad about killing them (even though they are mean battle machines).  The dragons are undeniably cool, from their wickedly stylized scales to their readiness to attack anything out in the open, whether it’s your enemies or you.  The wide variety of dragons you will encounter all have different abilities, so no fight will go exactly the same way.  Their AI variety means that every time you slay a dragon and suck out his soul (cool, right?) you’ll get a different dragon word to add to your repertoire of language.

Unlike previous Elder Scrolls games, you won’t be picking your class as you start out.  Instead, what kind of user you are will determine itself based on what items/weapons/magics you choose to use.  Each hand equips individually, and spells do stack, so putting the same spell in each hand will in fact give you a stronger version of the spell.  Add to all this your dragon shouts, special powers activated by “dragon words”, the growls and roars which constitute dragon speech and which you add to by killing dragons for more “words”, and you’re a pretty well equipped dragon-born. 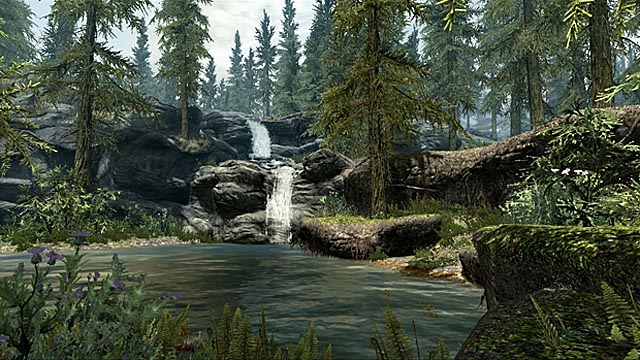 Even the user menus have been improved in Skyrim.  Everything looks so clean, the menus are easy to search through, and every item has been three dimensionally modeled so that you get full detail with every single item in your inventory.  It sounds like such a small thing, but being able to get into your weapons and items by seeing them as they’d look in real life totally helps to immerse the player in the game.  Or at least Bethesda thinks so.

The tech trees have also been upgraded; they’re now seen as constellations in the sky, which become more filled in and unique as you choose which parts to power up.  And the towns now boast working economies (well the whole world does, really) so NPCs are made more lifelike by their lives, jobs, and the fact that all of them, even some enemies, are happy to ignore you and go about their business.  Any job you observe someone doing, you can do yourself; another feature which allows players to feel more immersed in the game. 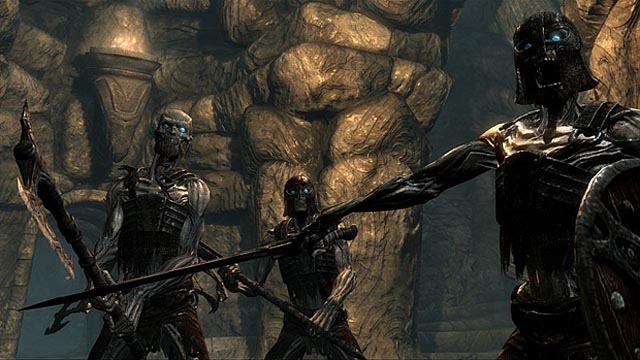 What we have here is a game that looks as though it certainly won’t disappoint.  All the hours of gameplay and specific detail you’ve come to expect from the Elder series, plus new story line, upgraded AI, and beautifully rendered enemies, blood, and fights.  The demo play we saw promises to allow your character all sorts of new fighting and tech options, along with randomized behavior of unscripted dragons and NPC’s. The Elder Scrolls V: Skyrim appears poised to transcend expectations this winter.