Atelier Ayesha Plus: The Alchemist of Dusk review 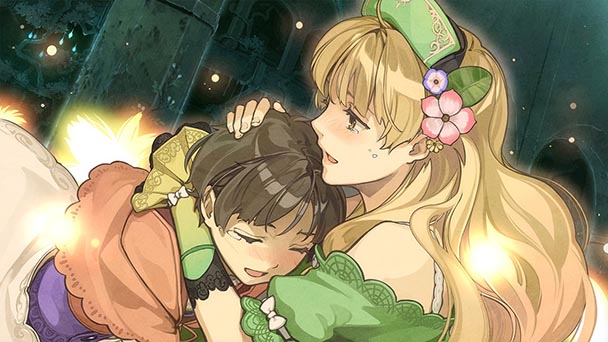 Look past the coquettish DLC swimsuits and intermittent instances where ditziness serves as comic relief, and the Atelier franchise reveals its principal virtue: it’s a series that focuses on female empowerment.  From Rorona’s efforts to keep her alchemical workshop from imminent closure to Meruru’s development of item synthesis to help advance her kingdom, GUST’s games have offered a representation of self-actualization that stands in sharp contrast to the surplus of masculinized JRPGs. Regretfully, the burden of stringent time management and a few superfluous mechanics have likely constrained the series to cult status.

For the PlayStation 3 release of Atelier Ayesha: The Alchemist of Dusk, the developers added a number of new gameplay elements, removed a refreshing amount of clutter, and gave the game’s plotline a pleasing dose of poignancy. Advances and additions continue with the recently released PS Vita version, where supplementation is signified by a “Plus” inserted into the game’s moniker. Assembling all of the downloadable content made available for the PlayStation 3 iteration, this adaptation also appends elements like new bosses, party management features, and most importantly- the option to play the game in either Japanese or English. 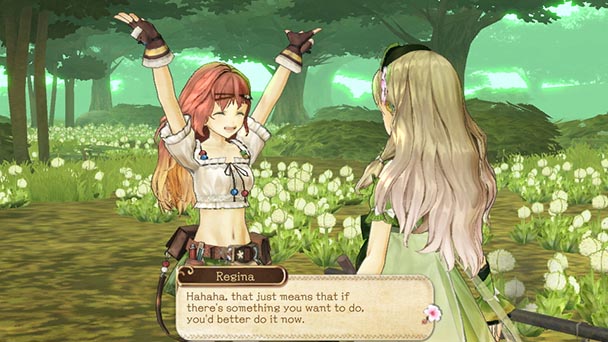 As the game opens, players are introduced to protagonist Ayesha Altugle- a young woman who has inherited the duty of running the local apothecary after the death of her grandfather and the disappearance of her sister, Nio. While collecting herbs near her sibling’s gravestone, Ayesha is visited by a mute apparition. Witnessing the same phenomenon, a mysterious visitor gives the heroine two recommendations: to seek a glowing flower and to study alchemy. Presumably, these two tasks might help explain Nio’s disappearance.

While humor and whimsical charm permeate The Alchemist of Dusk’s plotline, a shift toward solemnity is a welcome change, endowing the game with a pressing sense of urgency. While character art and music are irrefutably beautiful, it’s the articulation of gaman, that’s truly the game’s greatest virtue. A Japanese term that refers to confronting adversity with both perseverance and dignity, the concept reverberates through Dusk, as its citizens eke out a humble existence in a degenerating realm. Undeniably, Ayesha is a charismatic character, and watching her grow proves to be one of the game’s most fulfilling elements. Woefully, this development isn’t universal, with some of the game’s allies receiving simplified, if not endearing, characterizations. 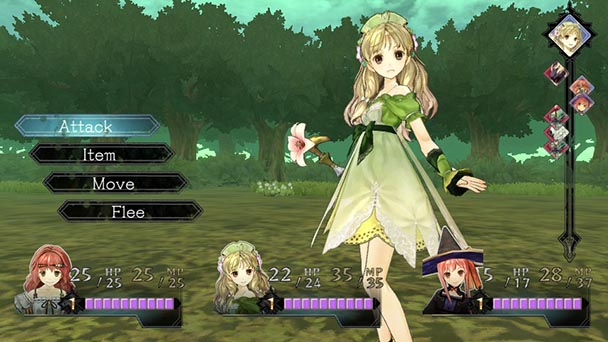 Arguably, the title’s best plotline adjustment is the reduction of time-based restrictions. Missions no longer have rigid deadlines, with only a single, overarching three year limit on solving Nio’s mystery. As such, the increased autonomy means that it’s a bit harder to determine if Ayesha is on track to meet her goals, making it a bit harder to determine if you’re on track to receive one of the game’s best endings. Delightfully, The Alchemist of Dusk contains a robust epilogue, delivering a dénouement which doesn’t dump players out of the game’s world once the core conflict has been resolved.

Much like the reduction of the title’s temporal restrictions, the process of alchemy has been simplified, reducing the barrier to entry. Whether Ayesha grabs ingredients from local merchants, fallen foes, or at glowing spots which litter each playfield, she no longer has to worry about her mana level- now the alchemist can craft items without repose. Failing recipes, which used could habitually happen to overzealous players, no longer occurs. The sole caveat surrounding alchemy is that the game doesn’t explain its nuances very well. While Atelier veterans will understand that the quality and order of synthesis affect output quality, newcomers will have to learn through experimentation. 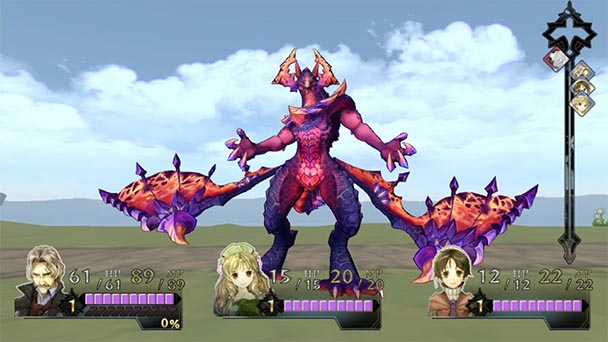 One of Atelier Ayesha’s most noteworthy design decisions revolves around how character development is handled. Periodically, the game makes a record of plot points, offering players the ability to spend Memory Points to not only unlock an extended synopsis of these events, but also provide stats bonuses, recipes and items. Stimulated by the distribution of additional points though synthesis, story events or errand incentives, the game’s Memory System offers a clever amalgam of a several mechanics; hopefully this component will return in future installments.

With The Alchemist of Dusk several new tweaks and additions are added to the formula. Support actions allow party members to provide defensive stands and provide additional attacks, while using action points permit characters to move around the battlefield- gaining an advantage by flanking foes. Although unit positioning seems like a minor addition, it does provide a contenting tactical element to the game’s battles. 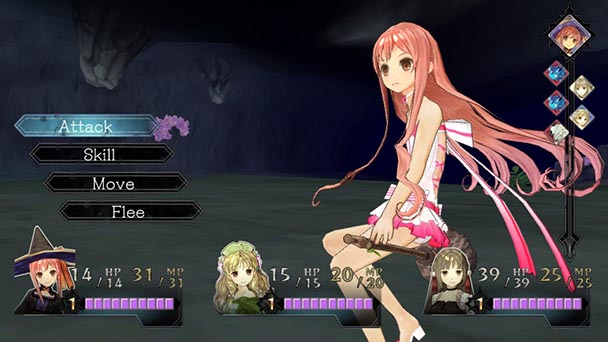 One of the most interesting additions to Atelier Ayesha Plus is the inclusion of the album system, where players unlock picture panels after completing tasks like synthesizing specific items. Once a collection of nine panels been amassed not only will an image be earned, but players become privy to abilities such as being able to change party members or adjust the speed of combat animations. Elsewhere, other changes are apparent from boss characters culled from Atelier Escha & Logy or an elevated challenge level which not only intensifies battles but makes crafting a bit more difficult.

Although the occasional environmental design can be striking, Atelier Ayesha Plus visuals offer a negligible amount of optimization over the PS3 iteration. This is most conspicuous during cutscenes, which exhibit a bit of judder when the camera tilts or pans. That said, Hidari’s character deigns are sumptuous, teaming with lace and pleats, yet narrowly evading lolita territory. For players who download the title before February 10th, Koei Tecmo is offering seven additional costumes, which do add a bit of fan service to Alchemist of Dusk’s proceedings. Beyond offering one of the franchise’s best soundtracks, Plus offers dual-language voiceovers. While the competent English voice-over is retained, purists will want to play the game in Japanese, where the seiyū capture the emotive qualities of each character. 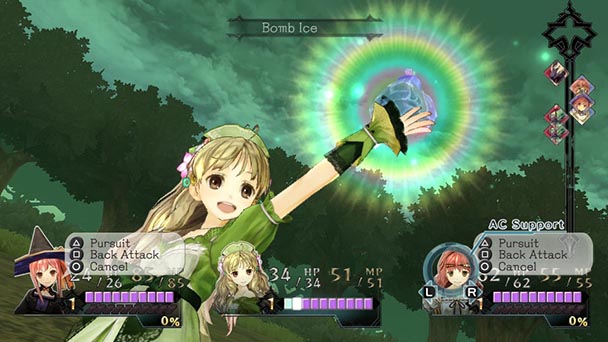 For players fatigued by the conventional male-dominated role-playing journey, the Atelier series has always been a refreshing respite. With Atelier Ayesha: The Alchemist of Dusk, the franchise’s customary journey of female self-empowerment remains- this time bolstered by play mechanics that offer a bit more polish and attentive streamlining.  If you’ve ever been on the fence about giving the series a try, The Alchemist of Dusk offers a friendly, cordial call to players.

Atelier Ayesha Plus: The Alchemist of Dusk was played on the PS Vita with review code provided by the publisher.

Atelier Ayesha Plus: The Alchemist of Dusk review
Look past the coquettish DLC swimsuits and intermittent instances where ditziness serves as comic relief, and the Atelier franchise reveals its principal virtue: it&rsquo;s a series that focuses on female empowerment.&nbsp; From Rorona&rsquo;s efforts to keep her alchemical workshop from imminent closure to Meruru&rsquo;s development of item synthesis to help advance her kingdom, GUST&rsquo;s games have offered a representation of self-actualization that stands in sharp contrast to the surplus of masculinized JRPGs. Regretfully, the burden of stringent time management and a few superfluous mechanics have likely constrained the series to cult status. For the PlayStation 3 release of Atelier Ayesha:&hellip;

Summary : Like the previous “Plus” ports in the Atelier franchise, The Alchemist of Dusk offers PS Vita players the definitive version of the game, offering a number of worthwhile amendments and additions.