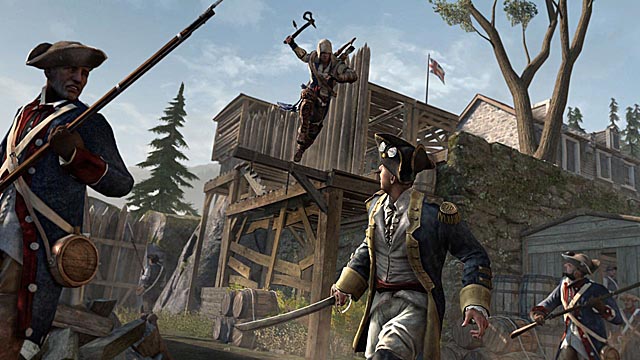 In the weeks leading up to Assassin’s Creed III’s release, there was little doubt of Ubisoft Montréal ‘s mammoth ambitions. With reports of a three year development cycle sustained by the efforts of four separate studios scattered across the globe, the project’s size and scope looked to establish new industry precedent. Yet, as the game’s release date drew near, apprehension loomed, echoing the type of risk-aversive uncertainly which often precedes the release of a bank-breaking James Cameron epic. Some wondered if the final product would offer a unified addition to the enduring war between Templars and Assassins or serve as a cautionary tale of unchecked aspirations.

Like the Canadian director’s best works, Assassin’s Creed III proves redemptive- offering a long, sweeping technological-driven marvel filled with sequences of peerless spectacle. Recalling 1997’s Titanic, the game seamlessly blends historical context with imagined melodrama. From exhibiting the magnitude of the Battle at Bunker Hill or the fuming dissent of the Boston Tea Party, the title articulates events with a visual palette inaccessible to history books and a breadth unavailable to a three-hour film. 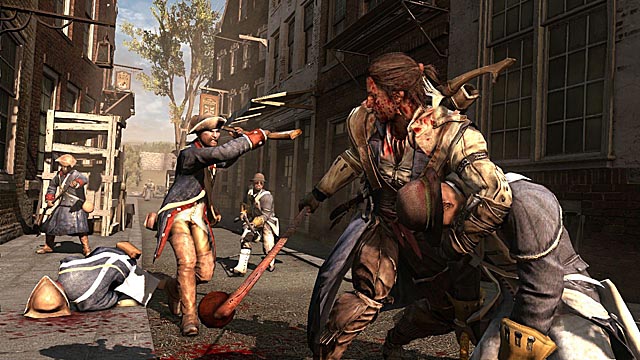 Woefully, the protracted prologue of Avatar also has an analogous element in ACIII. While players might be eager to swing cover star Conner (née Ratonhnhaké:ton) Keyway’s tomahawk, the title delivers several detours to introduce both returning and principal protagonists. Following a cinematic that details Desmond’s four game backstory, the Animus-utilizing adventurer leads newcomers through a brief navigational tutorial. Next, control shifts to Conner’s father, Haytham who’s tasked with a clandestine killing in the midst of an opera, quelling a murderous plot, and once reaching Boston, rounding up a group of like-minded companions. Once players have persevered through these elements, they’re ultimately introduced to Conner, albeit in teenage form before he’s trained in the assassin’s arts.

Even when gamers think the reigns have been handed over to them, ACIII isn’t done with its lessons, as there’s a wealth of mechanics to absorb. While open-world titles typically divert players with several types of side-quests and mini-games, Assassin’s Creed III engulfs participants with a plethora of engaging options. Whether seizing Templar forts, playing Revolutionary-era board games, developing your homestead, or search for animals, treasure, or pages to Benjamin Franklin’s Poor Richard’s Almanack. 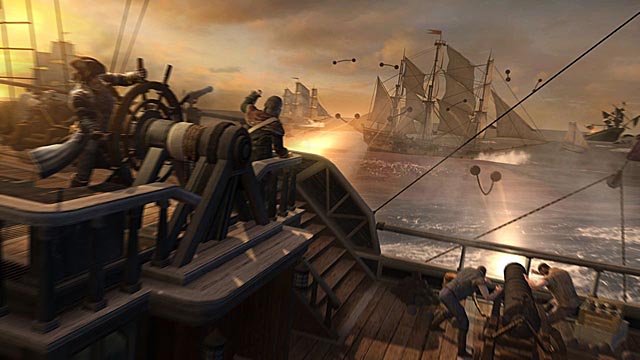 Undoubtedly, one of ACIII’s best diversions are the grandiose ship battles, which task players with taking the helm of formidable frigates. From etching a wind-driven course across tempestuous waves to circling foes to garner an optimal cannon shot, naval warfare is invigorating, deserving extension in future franchise entries. From utilizing chain shot to incapacitate the sails enemy ships to upgrading your seacraft, the game’s nautical battles are well-designed and visually stunning.

At times, these diversions outshine the game’s main storyline, especially since Conner lacks the charm and depth of Ezio Auditore da Firenze. In execution, his character is driven by little more than vengeance while the ACIII’s villains don’t reach the level of prodding malevolence flaunted in past franchise iterations. 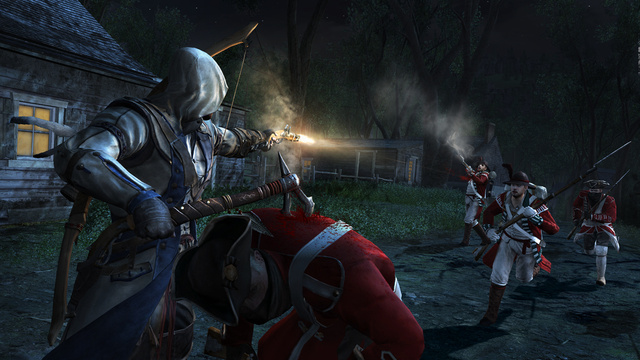 Although colonial American cities lack the architectural splendor of the franchise’s Middle Eastern and European settings, ACIII’s locales have their own virtues. While the title’s towns are more diminutive and lack of the verticality of Jerusalem or Rome, they still offer plenty of rooftops and ridges to scamper across and provide a wealth of varied objectives. Pleasingly, the game’s new AnvilNext graphical engine allows each settlement to be denser, with hundreds on NPCs roaming at once. Urban AI has been given an upgrade as well. Whereas previous assassins were able to easily give pursuers the slip, ACIII’s guards will chase with dogged, unscripted determination, ratcheting up the intensity of stealth sections. Even the game’s roaming denizens seems to have an improved level of awareness.

Yet the game’s true showpieces are its frontiers: vast flora-filled locales that articulate the grandeur of unsullied landscapes. Disturbed by the intermittent animal or roving battalion, these locales extend the offer of hunting for pelt or (English) pound. Prudently, creature stalking is removed from the straightforward approach exhibited by Red Dead Redemption, requiring a prudent combination of Eagle Vision, concealment, and tactical planning, as animal AI is no slouch. Merely traversing frontiers can be exhilarating, as Conner lithely surpasses towering trees, roaring rivers, and past majestic mountainsides in an effort to rope-dart his elusive prey. 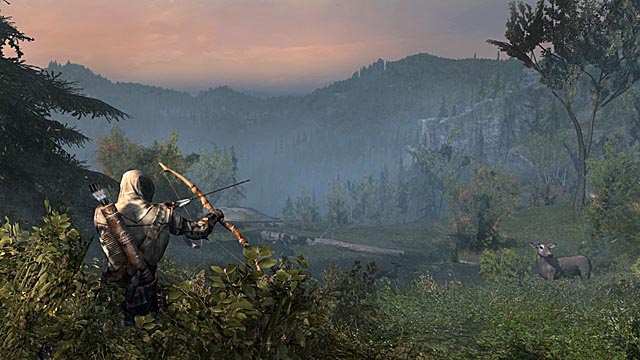 Mirroring the athleticism Conner flaunts when reconnoitering the great outdoors, ACIII’s combat has also been given a boost of vitality. The game’s stunning animation routines showcase unparalleled fluidity, allowing the protagonist to dispatch multiple enemies in a single, devastating sweep. Although battles still adhere to the block, parry, and attack cadence of previous entries- when coupled with weapons such as the bow, tomahawk, and pistol, conflicts are consistently rousing.

Considering ACIII’s multitude of mechanics, the irregular blemish seems nearly inevitable. Certainly, the title’s some grievous transgressions. Twice I was prohibited from advancing when the game aspired to teach left-trigger flintlock aiming, but wouldn’t allow me to equip anything more lethal than a clenched fist. The franchise’s famous money shot- scaling a summit, synchronizing, than falling securely to a cushioned target was occasionally stymied when the protagonist narrowly missed the mark, leaving the protagonist tragically crumpled beside a hay cart. More common are smaller blemishes which induce irritation rather that require a restart. Weapon selection can be woefully plodding and clumsy, while the game’s parkour elements still sporadically feel as if players are suggesting general directions rather than directly controlling each bound and edge grab. 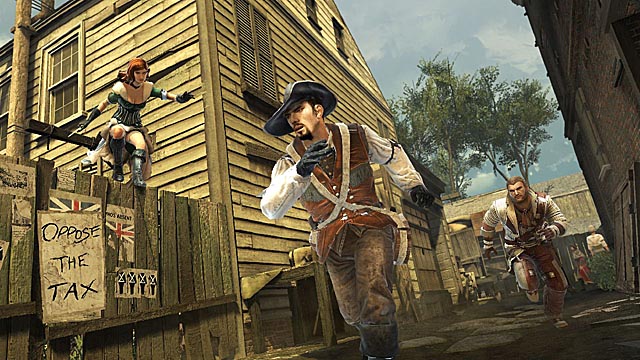 Whereas the multiplayer components of other IP’s are often as odds with their single-player storyline, the Assassin’s Creed series have strived to link the two together. Here, beyond the requisite draw of maps, modes, players also unlock additional backstory, making online play a compulsory enticement for completionists. Beyond the returning variants, Wolf Pack is the title’s best addition. Each round challenges a group of cooperative assassins to work in unison, rewarding players for the simultaneous execution of NPCs.

Assassin’s Creed III is the type of sprawling, grandiose epic that gamers wait all year for. Cramming an expansive simple player campaign, a cornucopia of side quests, mini-games, and an engaging multiplayer mode, Ubisoft Montréal has crafted one of the most detailed and immersive game world’s ever realized, besieging players with a swarm of diversion while bewitching them with an art style that draws from period paintings. Able to satisfy series stalwarts as well as newcomers, ACIII is an obligatory purchase amidst a holiday season satiated with triple-A titles. 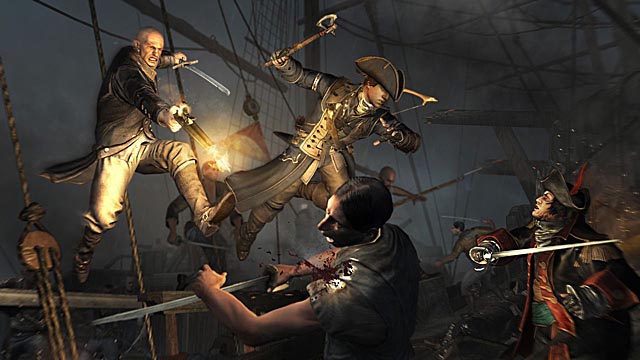