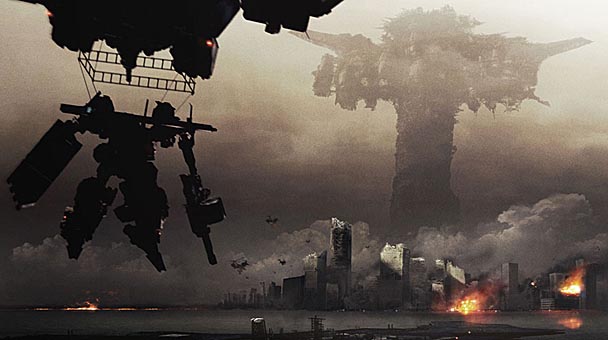 It’s a good thing Pacific Rim didn’t spawn a console tie-in. After strolling out of the cineplex, I could envision succumbing to the temptation of a hastily-developed interactive interpretation. Lured in by the prospect of piloting a hulking Jaeger, perhaps in perfect unison with an online partner, I concede that this rendition would likely follow the fate of most licensed games- and be devoid of depth. In practice, my deep-rooted mecha fetish would probably be better soothed by an entry in From Software’s long-running Armored Core franchise rather than some cash-grabbing rendition of the Guillermo del Toro film.

Although the series latest entry, Armored Core: Verdict Day doesn’t have any scaly terrors to trounce, the PlayStation 3 and Xbox 360 title does provide a cavernousness amount of content, offering the potential to engage committed players for weeks. In many ways, the recent release is the antithesis of the typical licensed game. Instead of delivering a feverish but short-lived conflagration, Verdict Day is like its predecessors, a smoldering burn. Requiring patience and determination, the title’s dividends are correlated to the amount of time players are willing to invest. 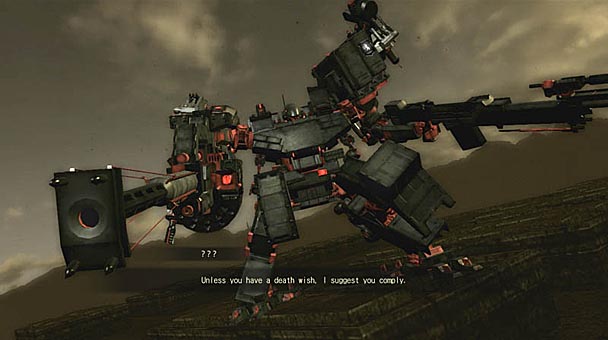 The preceding game in the series, Armored Core V, concentrated on an online, multiplayer pursuit. While Conquest mode flourished in Japan, the component floundered stateside, stymied by a slender user base and servers which separated the endeavor into geographical regions. For Verdict Day this restriction has been jettisoned, with World Mode allowing global participants to side with one of three conflicting factions, or even play as a mercenary- picking up contract assignments.

In execution, teams of up to ten  players are tasked with taking control of towers protected by a chain of eight bases. If an opposing force is online, you’ll be matched again their squad of Armored Cores (or ACs). Otherwise, players will battle AI-controlled forces, with the resulting of the match altering the AP rating of the base. Periodically, teams can tackle Special Sorties, where well-armed antagonists with substantial defensives put AC squads to the ultimate test. For players who prefer a managerial role, the role of operator is available. Here, gamers forsake the exhilaration of combat to command a quartet of AI drones to victory. 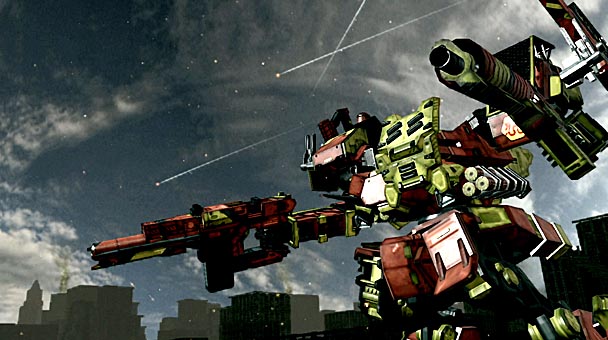 Regardless of the gameplay variant, camaraderie ran strong through Verdict Day’s sorties. While your results may be wildly different, the game’s Xbox 360 community seemed exceedingly supportive. After joining a team, I was welcomed by its members, and we quickly developed a relaxed rapport. Naturally, some of this is cultivated by Verdict Day’s mechanics, which encourage teammates to call targets, draw fire, and communicate the effectiveness of each weapon type. For serious players looking for like-minded, well-behaved compatriots, a purchase of Armored Core: Verdict Day might just be warranted by its community.

For games who prefer a solidary experience, the title’s offline component has some intriguing elements, but also a few blemishes. The game’s post-armageddon context is lacks a compelling narrative impetus and conveys about as much emotion as one of the game’s mechanized Cores. Although the sixty mission attempts to provide variance, too often players are left shooting at fitful foes which demonstrate a modicum of astuteness. ‘Fire when near’ and ‘buzz the player’ seem to be the title’s core stratagems. 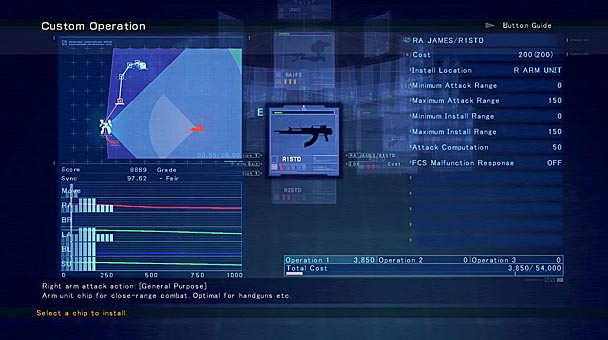 The lack of enemy intelligence is a bit puzzling, since ally NPC Cores show brainpower on the battlefield. One of Verdict Day’s best additions is UNACs, CPU-driven customizable Cores which provides support on sorties. Like your own personal mechanized mayhem-bringer, UNACs can be outfitters with a plethora of parts and given sets of details instructions to model behavior. Although players can undertake the title’s persistently challenging missions independently, before long the assistance of a UNAC will be required, as a deluge of enemy descend on the player.

Following Armored Core protocol, a myriad of construction option ensure players will spend as much time engineering as they will be engaged in combat. Each of a core’s fourteen components can be outfitted with a multitude of objects, allowing players to modify everything from weapon loadouts, forms of propulsion, shielding, and energy sources.  From hummingbird-esque ACs which flit across the battlefield to lumbering tank-like monstrosities which can barely push around an arsenal of overwhelming weapons, players are given near complete autonomy to craft a wide variety of machines. In essence, the only limitations are the laws of physics- forcing players to make accommodations based on energy consumption and weight. Pleasingly, players can even import their own custom AC from Armored Core V at the beginning of the game. 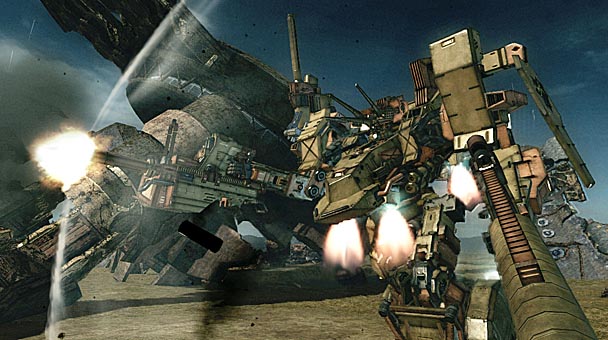 Configuring your Core can be a bit daunting; the process which isn’t helped by the lack of tutelage, intermittently unintuitive user interface, and diminutive font size. Yet unlike most mech titles, Verdict Day’s control methods aren’t astonishingly complex. Beyond the basics of boosting, navigation, weapon deployment and selection, the title only offers a few additional elements. Engaging the right thumbstick triggers scan mode, which highlights enemies and shows mission waypoints. For foes hidden behind cover, players can launch a recon unit with a press of the “B” button, sending a tiny scout that can provide additional intel. Although the Verdict Day’s controls are easy to master, that doesn’t mean the game is a cakewalk. In fact, players who rush in, shirk cover, and fail to evade enemy fire will quickly find themselves in a smoldering pile of melted metal. For those inclined, the completion of the main campaign opens a Hardcore Mode, which bring a nigh-insurmountable trial to gamers. Amusingly, one element even put’s Chris Rock’s joke to the best, outrageously elevating the price of ammunition, and making every trigger pull a challenging meditation.

The visual apex of the game is its core designs. Assembling your steely superweapons, brings up a rotatable image of your machine, apt to ignite the passions of any Gundam enthusiast. Woefully, the rest of the game never nears that plateau; weapon effects are only decent, lacking the particle effects, striking smoke trails, collateral damage and mounds of expended brass that have highlighted other mecha games. Environments fare no better, most are drably hued and composed of low-resolution textures. Explosions do little to covey the bombast of humongous, overwhelming weaponry. 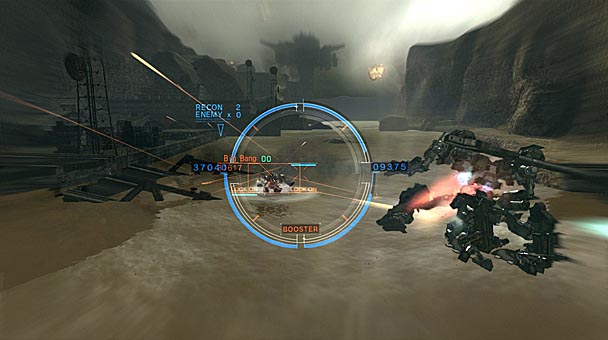 Preserving precedent, Armored Core: Verdict Day is not for the impatient players accustomed to hand holding. Demonstrating intricateness and sporadically- intolerance, the game ultimately rewards, but only to players willing to dive into its recesses, and learn the nuances of UNACs, Core construction, and team cooperation. The title’s virtues aren’t found in the fleeting thrills of a singular firefight, but in a cornucopia of complexity. This is about as close as console titles come to the intricacy and involvedness of a PC game.

Armored Core: Verdict Day Review
It&rsquo;s a good thing Pacific Rim didn&rsquo;t spawn a console tie-in. After strolling out of the cineplex, I could envision succumbing to the temptation of a hastily-developed interactive interpretation. Lured in by the prospect of piloting a hulking Jaeger, perhaps in perfect unison with an online partner, I concede that this rendition would likely follow the fate of most licensed games- and be devoid of depth. In practice, my deep-rooted mecha fetish would probably be better soothed by an entry in From Software&rsquo;s long-running Armored Core franchise rather than some cash-grabbing rendition of the Guillermo del Toro film. Although the&hellip;

Summary : Putting the (Armored) Core in hardcore, Verdict Day has an unabashedly steep learning curve but a long-tailed capacity for enjoyment.