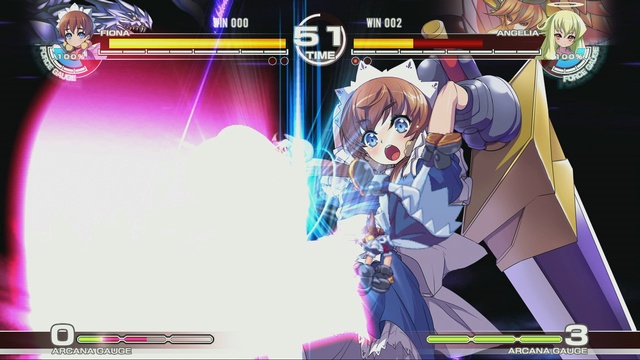 Fate certainly hasn’t smiled upon Arcana Heart 3. Relegated to niche status by the franchise’s fetishized roster of teenage girls, the third entry in the series was released hours before the Playstation Network outage. Most stateside gamers with the slightest interest in pitting moekko against each other had to wait more than a month for the privilege, as the game abstained from a disk-based release in the U.S. While this extended delay isn’t likely to kill the cravings of hardcore otaku, players accustomed to more mainstream fighters might be tempted by the flash and fanfare of imminent titles like Super Street Fighter IV Arcade Edition. Yet, for any gamer looking for a deep fighter, neglecting Arcana Heart 3 could be a critical transgression.

As an reoccurring entry within Japan’s Tougeki – Super Battle Opera tournament (a competition rivaled only by EVO’s level of prestige), Arcana Heart certainly has the fundamentals of fighting down. Players have access to weak, medium, and strong attacks, which when used in conjunction with directional pad maneuvers, can deliver a robust selection of combos and special attacks. Beyond the archetypical quarter circles, double-taps, and z-motions common to Capcom and SNK titles, Arcana has a pleasing number of additional particulars which give the title a unique vibe. 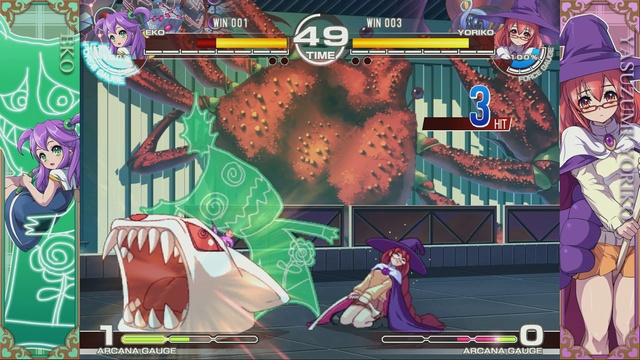 After choosing a combatant from the game’s roster of 23 fighters, players also pick an Arcana- which affects both the potency of your strikes, as well as protection from enemy attack. Supplementing an already defensive-oriented character with a resistant arcana might be an ideal combination for turtlers, while more offensive-minded players might prefer a more aggressive amalgam. With 529 permutations, the title offers a pleasing amount of customization, since each manifestation noticeably alters the aptitude of your character. Additionally, arcana’s endow a fighter with both a few standard attacks as well as the Arcana Blaze- which provides a screen-filling, devastating wallop.

One mechanic that is nearly as essential is the Homing Dash, which allows players to quickly remove the distance between an opponent. A press of the ‘X’ button sends airborne or ground-based players darting toward their opponent. Since the ability isn’t tied to your Arcana Gauges, it can be used incessantly by players, to bolster combos and quicken the tempo of the game’s tussles. Smartly, Arcana Heart includes momentum reversers such as Homing Cancels (which abandon sweeps or launchers for homing attacks) and Guard Cancels (which covert a block into a brief period on invincibility), which are constricted by a meter. 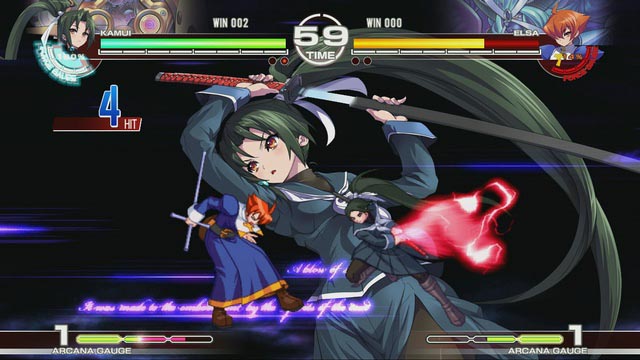 Graphically, Arcana Heart 3 is effective, with each vibrantly colored fighter drawn with an ample array of animation frames. While the pixelation and slowdown found in previous franchise installments has been excised, the game lacks the sheen of its fighting contemporaries, with backgrounds only coming to life once Arcana are summoned. Beyond a widescreen output, players also have the option to fill the game’s borders with animated characters, or wallpaper. Fortunately, Aksys didn’t muck with the game’s audio, the entire game is in Japanese, using subtitles to translate the game’s dialog.

Story Mode employs a hackneyed plotline where an apocalyptic scenario is the impetus for a fighting tournament. Beneficially, the narrative is delivered with enough energetic absurdity to make the who excursion worthwhile, at least until players confront an unsporting final boss. For true masochists, Arcana‘s Score Attack Mode culminates in an even tougher opponent, capable of drawing the ire of even the most patient player. 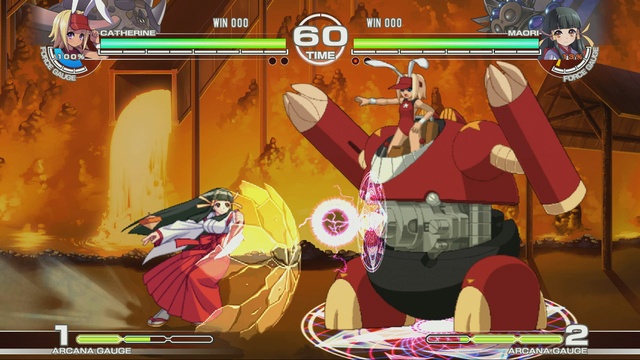 Hardcore fighting fans would be wise to overlook Arcana Heart 3‘s understated visuals. Hidden beneath an unassuming roster of twenty-three teenage combatants is a astoundingly deep title which has the all the technical minutiae of a Guilty Gear or BlazBlue game. Although the game became mislaid during the PSN breakdown, Arcana is a worthwhile addition to any combat connoisseur ‘s library, especially for its thirty dollar price.

Previous: What is Captain Forever?
Next: Duke Nukem Forever Review