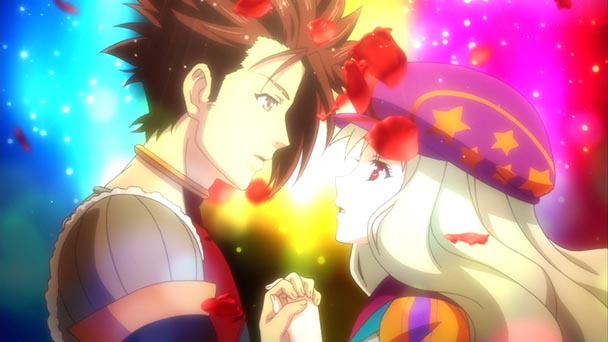 Although Japanese role-playing games are habitually criticized for having derivative battle mechanics, verbose dialog, and trope-filled plots, the genre flaunts one prodigious advantage; no other type of game routinely offers such a rich depiction of interpersonal relationships. During a journey that customarily lasts more than forty hours, players regularly build an affecting bond with characters, attaining memories than can resonate long after the closing credits have rolled. From Kefka’s speech in Final Fantasy VI to Crisis Core: Final Fantasy VII’s punctuating cinematic, games can have an emotional impact that rivals the sentiment that’s formed by reading a potent piece of literature.

Since we often have an active role in the protagonist’s journey, occasionally the interactive medium outshines print, with identification forming from each successive decision that a gamer makes. While the release of Ar nosurge: Ode to an Unborn Star requires players to spring over some narrative-based hurdles, once the game’s context is established, the game’s relational developments elevate the title above a majority of its contemporaries. Conceivably, Ar nosurge’s allegory for music as magic is also likely to win over an aurally-minded audience. 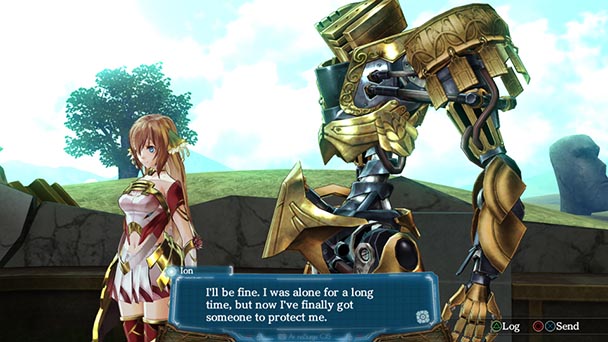 But before players are able to empathize, they’ll need to get their bearings in the game world. As a title which unites elements from the Ar tonelico series as well as Ciel nosurge, a PS Vita title which only saw release in Japan, this undertaking can be a bit challenging. Exacerbating the issue are the game’s first few hours, which introduce a steady stream of terminology as well as a mythos which doesn’t receive explanation until later in the game. Fortunately, Ar nosurge does provide newcomers with a few helpful amenities, from being able to backtrack and read earlier bits of dialog, to providing an in-game codex which gives explanation for highlighted terms.

The game’s opening cinematic seems to foreshadow a simmering conflict on the verge of escalating into an impassioned conflagration. Millenniums ago, the planet of Ra Ciela was destroyed, forcing its surviving populace to take refuge on a giant space ship. For eons, existence on the ship was uneventful, with the craft berthed outside a barrier known as “The Shield of the Gods”. But harmony was eventually broken when the Sharl, winged, song-magic using lifeforms inexplicably appeared on the vessel, taking about the crafts inhabitants to an unknown location. This action led to the formation of two factions: a religious organization who concedes to the Sharl and another group poised to battle the interlopers. 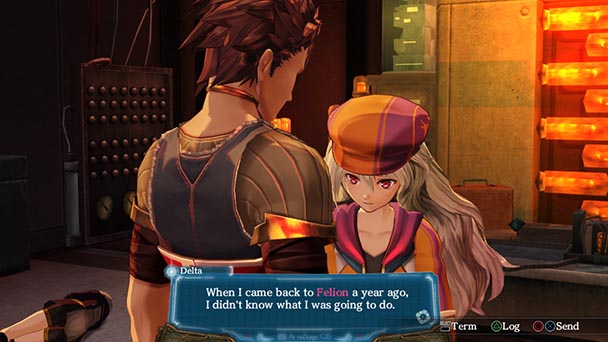 While Ar nosurge’s set-up sounds like an archetypal dialectic between good and evil, the game wisely avoids such a simplistic dichotomy. Sure, Ode to an Unborn Star is a largely linear affair, often offering more of the appearance of choice that actual autonomy, but this design decision permits the game to alter player perception. Shrewdly, apparent antagonists are given justification for their actions, allowing the game’s plotline to investigate some interesting ethical quandaries. Without trespassing into spoiler territory, the game also has one metaphysical moment that is certain to inspire chatter among role-playing aficionados. It’s an element so wonderfully thought-provoking that it’s certain to be explored in forthcoming titles.

Even more rewarding is the Ar nosurge’s rendering of relationships. The game’s initial pair of protagonists, Delta Lanthanoir and Casty “Cass” Riernoit exhibit a rapport that begins with the sporadic instance of playful teasing, and charmingly develops with each passing hour, later giving way to another duo, before allowing gamers to freely switch between the two teams. Periodically, the game’s interface extends additional conversational elements, similar to the ‘skits’ in Bandai-Namco’s Tales series. Although non-compulsory, these brief conversations really help to flesh out the game’s roster. 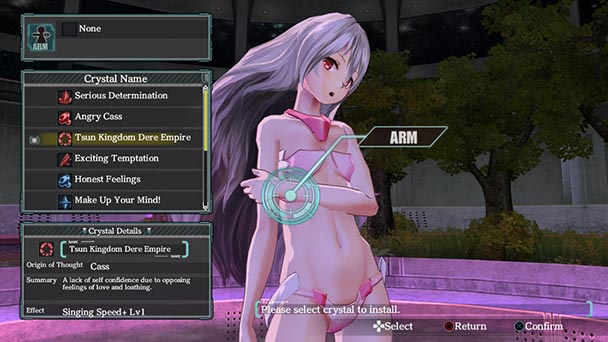 Character development is also delivered through Genometrics, a mechanic which briefly pauses the role-playing proceedings to extend visual novel like sequences. Here, players plump their cohort’s psyche, alleviating worries through branching dialog trees, all in an effort to increase the power of their Song Magic. In execution, it’s a pretty ingenious way to meld character augmentation and exposition, and feels especially interesting when gamed dive into the Soulspace of others, tweaking their personalities to fit a particular play style. Meanwhile, item acquisition is handled via a crafting system which recalls the alchemy mechanic of Gust’s Atelier games. Combat escalation is managed during Purification episodes, where player and heroine change into their swimsuits, and the proper banter allows players to place a power-boosting crystal into one of five different corporal locations. If the gaming industry produces a “metaphor the year” category, Ar nosurge is an absolute shoe-in.

Early on, these supports won’t really be needed in battle. Ar nosurges’ turn-based conflicts are certainly creatively framed and move at a swift clip, as players use the DualShock’s face buttons to issue attack chains and adopt defensive stances. In lieu of a single fight, players face waves of opponents, strategically striking at lanes where foes foretell of attack. The danger is that players might developer fatigue at the game’s default difficulty level. As such, RPG vets would probably increase the setting to add tension to each skirmish. 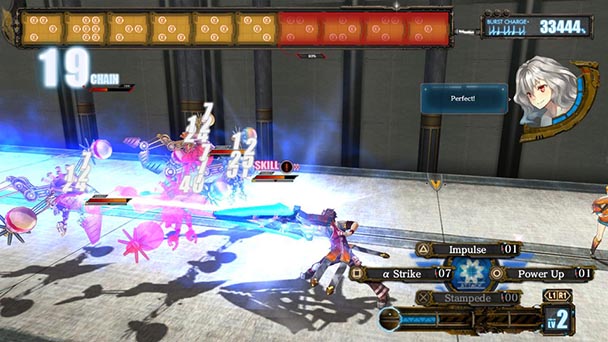 Finishing every enemy with an imminent strike give players a bonus turn, which not only allows you to persist your pugnaciousness, but also contributes to a meter which allows your partner to unleash a manic melody of Song Magic. Like the best combat systems, Ode to an Unborn Star urges gamers to hold their ultimate armament until the point of maximum tension, releasing in a wild fit of adversary-annihilating spectacle.

Fortunately, Ar nosurge visual prowess isn’t limited to instances of Song Magic. Instead, the game is an accomplished visual performer, flaunting a clean aesthetic and a wonderfully fluid framerate. Sonically, the game’s soundtrack is incredibly well-convinced and executed, offering an assortment of tunes that range from the energetic to the ethereal. While the game’s option for Japanese or English dialog is to be commended, some might wish that a larger portion of the game is voiced. Too many pivotal scenes are undermined by the lack of verbal delivery. One final issue with the title: the game’s location can be a bit spotty, exhibiting the occasional instance of disobedient grammar as well as the irregular instance where continuity isn’t maintained. 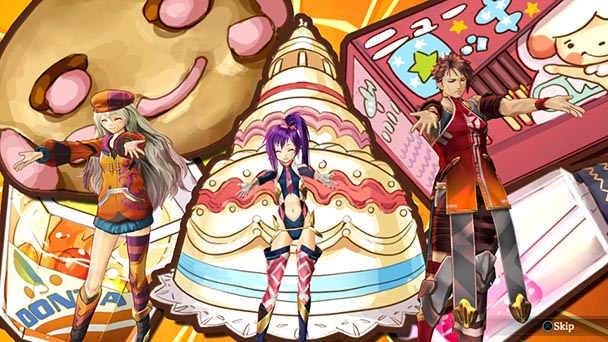 If players are able to get past Ar nosurge: Ode to an Unborn Star’s lore-heavy introduction, they’ll find a journey that’s rich with rewarding relationships and resists moral simplicity. Nearly as effective as the way the game’s components fit together, offering a creative, cohesive play experience that will inevitably cause gamers to cast an inward look. For that element alone, Ar nosurge is worth your time.

Ar nosurge: Ode to an Unborn Star was played on the PlayStation 3 with review code provided by the publisher.

Summary : While Ar nosurge: Ode to an Unborn Star’s plot might perplex Ar tonelico vets, concerns should be quelled by the game’s adept character development and tapestry of interlocking, enjoyable game mechanics.