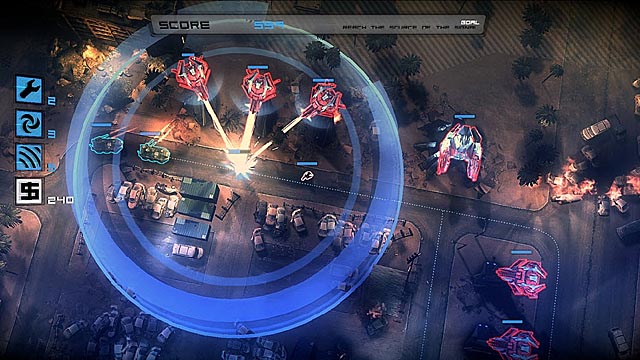 Anomaly: Warzone Earth valiantly tries to uphold the “anomaly” aspect of its moniker, initially doing a great job.  The game exhibits distinctiveness in both its initial structural elements and the voice acting (although super campy, it sounds like they’ve employed the mellifluous stylings of Jason Statham’s vocal stunt double). The controls of your team are buttery smooth, and the action commands for your controllable character are original- yet still flawless in their execution. Excited to play a reverse tower defense game for the first time in a long while, I jumped into this game with gusto and at first this game didn’t disappoint.  However, the longevity of the title’s unique gameplay slows down a gradual slope to an eventual halt as the campaign progresses.

At the beginning of the game players are responsible for commandeering a force of vehicles. Here, they are tasked with only one service for their team, which is to lay down healing circles as the vehicles take damage from enemy alien towers.  As the game progresses, players are given more variety for vehicle choices, more types of circles they can lay down, such as decoys or air strikes, and they encounter an increasing variety of alien baddies.  All the way up until the near end, the game continues to supply an increasing diversity on both sides.  However, as the game continues, it becomes more apparent that this is the only thing about it that continues to diversify. 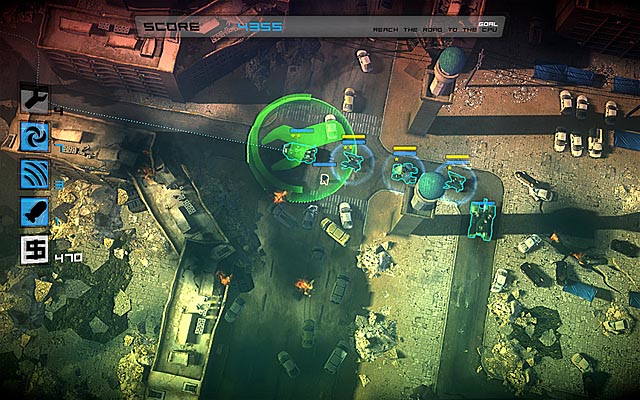 The game initially introduces a variety of level types- from timed missions to resource gathering assignments. Yet, there’s also degree of flexibility, as players can opt to eliminate additional  foes or concentrate on an efficient extraction. Early on, gamers are are offered the ability to choose different pathways through levels to accomplish these different goals, with the game rewarding player with different medals based on their decisions. Yet, halfway through Anomaly, players will notice that all the levels become homogeneous- with the only difference being more bad guys to fight. The layout of maps, placement of bad guys, and goals for your team all end up looking the same on every map. For better or worse, the game’s plot culls from Halo, throwing players in the middle of a conflict between two alien races, and forging a sense of continuity by revisiting notable battlegrounds. Yet the plot line deteriorates severely from there, and by the time you get to the final battle, the storyline becomes a mere footnote, rendering the fruits of victory especially bland. The game tries to create fulfillment and re-playability with things like medals and leaderboards, but with no sense of accomplishment emanating from the plot, one may feel like simply turning the game off and moving on once they’ve finished.

These faults aside, the game is still an entertaining and well-crafted game. Buying and upgrading of vehicles is blissfully trouble-free, and player decisions makes have a obvious effect on gameplay.  Also, the game is pleasingly adaptive- throwing down different challenges in areas that actually correspond to where the player is on the current map. Likewise, the title’s three difficultly settings radically alter Anomaly‘s level of challenge, accommodating a wide swath of players. Players must creatively conquer increasingly overwhelming odds, and the strategy component is definitely apparent in the game.  Also, though the dialogue is campy, there are some priceless moments, such as “Gaijin, welcome aboard.  Remember, a good enemy is a dead enemy,” said in a stereotypical Japanese general’s voice who greets you as you arrive in Tokyo. 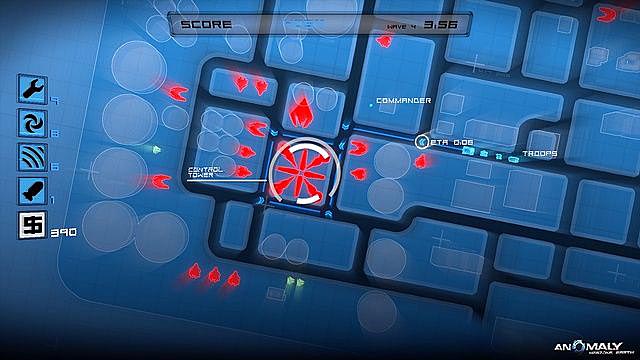 Overall, the strategy and gaming elements are there, and the mechanics are smooth.  Visually, Anomaly‘s graphics are marvelously rendered, and reliably solid. If the game had spent a bit more time refining its narrative, it would verge on exceptional. As it stands, Anomaly: Warzone Earth is a consistently enjoyable game…all except for that last thirty minutes.

*An interesting bit of trivia, the first tower defense game was actually a reverse tower defense called Bokosuka Wars, released by ASCII in 1983.