A Look Back at Mischief Makers 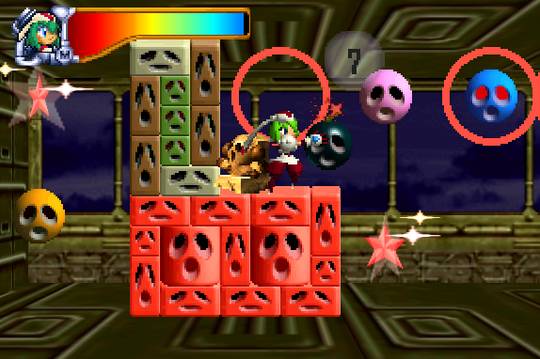 The year was 1997. An 11 year-old BlueSwim faced a difficult choice. He had two coupons in his hand for two different games, but could only have one. The first coupon was for a unique take on Tetris, called Tetrisphere. The second coupon was for a quirky, Anime-inspired game starring a female robot with bright green hair. That game was Mischief Makers. To be perfectly honest, I was embarrassed to ask my Mom for it. This was around the time I started to publicly outgrow (but still secretly loved) Sailor Moon, an Anime also starring a female protagonist. I guess I was a little shy about wanting to play a game starring a woman since I was afraid it would be viewed as “girly”. Still, I swallowed my pride and, in a quite specific memory, I told her I wanted to get it while we were eating lunch in the parking lot of a Home Depot-like hardware store, called Hechinger. This was one of the best gaming choices I’ve ever made.

Mischief Makers is a 2-D side-scrolling platformer where you grab, shake, and throw various items and enemies on the way to reaching the blue warp star that takes you to the next level (or the stage selection screen, if you will). The level design itself isn’t the most inspired you’ll ever find. Stages consist mainly of blocks with faces on them stacked at varying heights and placed in front of a colorful scrolling background. What eases this complaint a bit is the use of gimmicks. For example, in one stage you must avoid obstacles and enemies while walking on a rocket. If you walk too far towards the back of the rocket, it tilts up and will crash into the blocks along the top of the screen. In another stage, Marina must compete in an Olympics-like athletic festival where if you team doesn’t win, Marina loses the fantastic prize that is Professor Theo. I even remember competing against my late Grandpa (who was a reluctant participant) in the athletics festival stage when I was growing up. While a lot of other 2-D platformers have had better level designs than Mischief Makers, the same can’t be said about the boss fights. 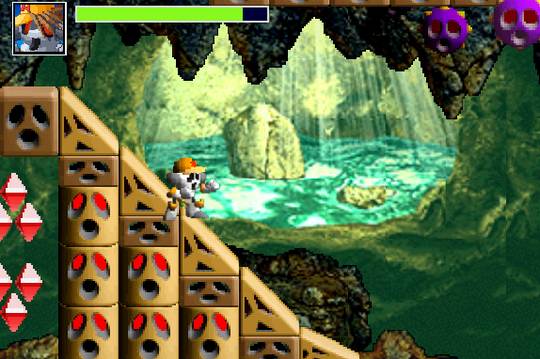 In Mischief Makers’ boss fights, the window of opportunity to grab the enemy is much shorter; usually only a split-second. This window is marked with a beeping sound and a targeting reticule flashing around the enemy (or the part of the enemy you’re supposed to grab). Grab the enemy in this window and shake or throw them to inflict damage. It sounds simple, but it isn’t. These fights are not only tough, but the highlights of the game. Treasure has put together some fantastic and memorable battles. In later worlds, you’ll have two boss fights: one against a “Beastector” and the second against the Beastector and their transforming vehicle. In the last world, you’ll square off with all three Beastector transforming vehicles as they merge into a Megazord-like giant robot. One last thing I’ll mention about boss fights is that what you have to do to defeat the final boss is something I’ve never seen in another video game, either before or since; you have to grab negative feelings thought bubbles, shake them to turn them into positive feelings thought bubbles, and chuck them at the final boss.

As you make your way through each stage, you collect jewels that are one of four colors: red, blue, green, and gold. Red jewels are used to buy continues should you run out of health. The blue, green, and gold jewels replenish Marina’s health bars (maximum of three) in varying amounts. The gold jewels have a bigger purpose to them as the more you collect, the more of the game’s ending you can see. There is only one gold in each stage, meaning you have to find each gold jewel in every stage of the game to see the ending in its entirety. 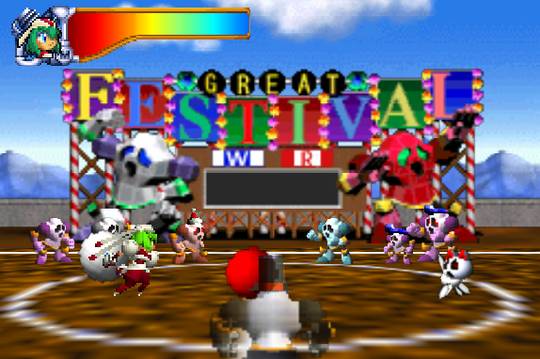 Immediately after you start a new game, you’re hit with Mischief Makers‘ wonderful personality. Professor Theo is sitting in the Japanese living room-styled interior of his house-shaped space ship when these creatures with faces eerily reminiscent of the tree spirits from Princess Mononoke, called “Clancers”, start wrecking the place, swinging from the ceiling light, and kidnap the professor. Upon discovering Theo’s disappearance, “Ultra Intergalactic Cybot-G” Marina Liteyears rushes off to get him back. Her hunt ends relatively quickly as she encounters the father and son team of the Migens. Migen Jr., a large, easily confused dragon creature that resides in a lava pit, eats Professor Theo before the fight begins. How does Marina get Migen Jr. to cough Theo up? She grabs his fist as he punches and tosses it right back at him. After a few shots to the jaw, Theo is safe and very glad to see Marina. The problem is that Theo gets some “busy fingers” with Marina and, in retaliation, she throws him halfway across the planet and her adventure continues.

Imagine an entire game with antics like that and you’ve got Mischief Makers. What allows the characters’ personalities to shine so brightly is the frequent use of cutscenes. The majority of the game’s stages open with or have some sort of cutscene. While the animation of these scenes isn’t overly complex, the comical writing is where the money is. If this game doesn’t make you laugh once during your play-through of it, you don’t have a soul…or at least a sense of humor. The amount of text in Mischief Makers is rather surprising. I can’t recall a 2-D platformer off of the top of my head with this much text. The story of Mischief Makers isn’t the deepest you’ll find. However, it does have some twists and turns. Gather those gold gems, people. 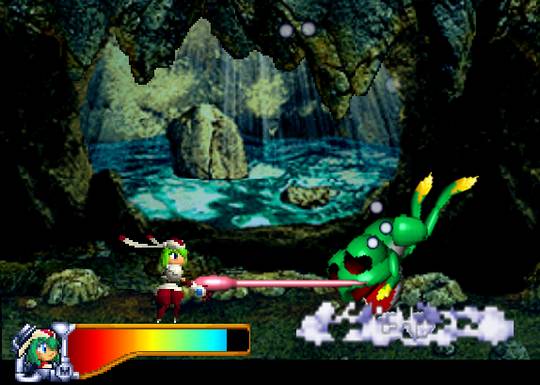 When I popped the game into my N64 to replay part of it for this article, a wave of nostalgia hit me. Just seeing the bright and colorful logo and hearing the main theme song on the main menu gave me this warm, fuzzy feeling inside. If the save that reads “01 day 01 hrs 33 min 13 sec” wasn’t a dead giveaway, I love Mischief Makers. I love every song of its uniquely-stylized midi soundtrack, especially the rockin’ boss music. I love the entire cast of characters. I love the game’s personality. I love the boss fights. I love everything about this game. It may not be absolutely perfect, but it deserves its “Nintendo 64 cult classic” status. Currently on eBay, the game often goes for under $10. Get it. Play it. Love it.