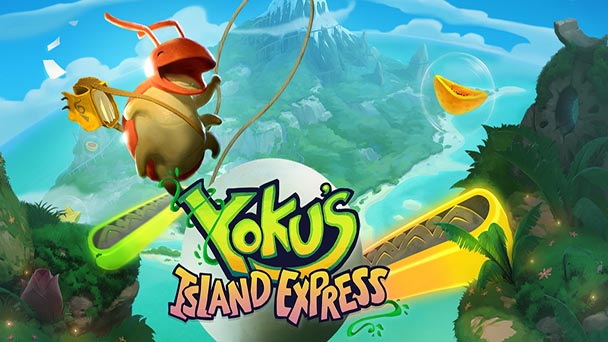 Games consistently cultivate moods in players, whether it’s the feeling of fear in the Resident Evil, Silent Hill, and Dead Space franchises or the humbling sense of frustration wrought in the Demon/Dark Souls series. But beyond Nintendo’s output, few developers are able capture the sensation of unadulterated bliss. Undoubtedly, it’s a much more difficult sentiment to nurture, requiring a fastidious amalgam of creative mechanics, an ample amount of polish, and an indulging aesthetic output. But amazingly, the two-person team at Villa Gorilla have nearly pulled it off. With the release of Yoku’s Island Express, the Stockholm-based studio has crafted an enchanting experience that melds open-word exploration with pinball-inspired play.

The game’s eponymous lead might seem like an unlikely species for a starring role, but it’s difficult not to empathize with the diminutive dung beetle. The game’s opening finds Yoku landing on Mokumana Island, taking over the duties of postmaster. The vocation makes a natural fit for gaming, as you traverse the environment, tackling not your delivery duties, but going out of way to appease the local creatures with a variety of fetch quests. Unsurprisingly, your actions transcend the mundane, and you’ll soon learn that Yoku is destined to safeguard an ancient deity. For some reason, the idea of a lowly bug tirelessly toiling to safeguard a mighty god resonated with me. 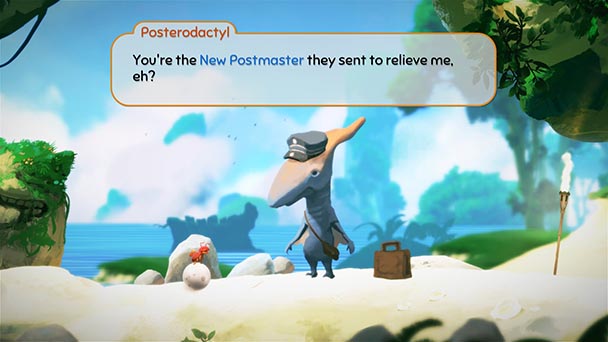 Besides being infinitesimally small, you’re also burdened by being tethered to a sphere. This forms the basis for Island Express’ navigational system. As a tiny dung beetle, Yoku can’t jump, but he can roll his sphere horizontally in either direction. Thankfully, Mokumana Island has an ample supply of pinball-like flippers that can catapult the little insect skyward or through the network of tunnels on the landmass.

Recalling SCE Japan Studio’s LocoRoco, navigating Yoku through the meandering island pathways is intensely satisfying. While it’s not immediately obvious, a fastidious amount of effort when into the physics system and level design. All too often, you’d expect Yoku and his orb to behave as erratically as a real pinball, with momentum tossing the vulnerable insect right off the edge of an area. But environments exert control, ensuring that the beetle doesn’t fall over a crest and that launchers send him precisely into the next zone. 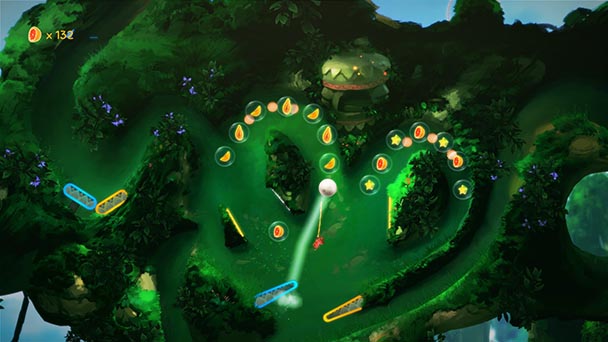 Taken too far, these safeguards could have easily confiscated the feeling that you’re in control. But Island Express rarely feels as rigid as the Blast Barrels in Donkey Kong Country. Rather than ping-ponging the protagonist across a succession of objects, Island Express breaks up the propulsion into smaller bits. Frequently, I tried to find a way to ‘break’ Island Express, but the crew at Villa Gorilla had seemingly guessed my every move and kept Yoku confined to specific areas.

Some of this undoubtedly stems from Island Express’ movement system, which uses blue and orange-coded flippers and well as launchers decorated with both hues. Cleverly, the method makes navigation across new zones easy, as you’re able to quickly ‘read’ the trajectory that flippers and launchers will send the ball. Occasionally, a fetch quest will force backtracking, but a map screen reveals the layout of the entire island. And just as zooming around familiar areas induces a hint of fatigue, a fast-travel system becomes available. 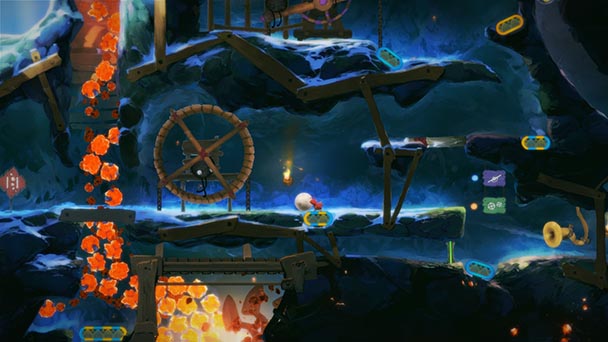 Enjoyment also comes from the game’s sense of autonomy. Periodically, you’ll encounter an area that vaguely resembles a pinball table. There, you’ll have to solve a simple puzzle to proceed, whether it’s amassing fruits, the game bartering currency, or enough gather enough purple pieces to unlock an adjacent door. While you can ricochet around the mini-playfield, collecting fruits until you reach limit, you may also journey ahead with a single well-placed shot. Remarkably, Island Express tales place on a single, massively-sized (and load time-free) map, and save for some Metroidvania-like gates to guide your journey, you’re largely free to roam about as you please.

Satisfaction also arrives from the sense of exploration, as you meet curious NPCs and are given abilities that allow for new navigational abilities like bouncing off hazardous objects, swimming underwater, or grappling onto plants. While most of Island Express is delightfully free of skirmish, the developers recognize that a bit of battling can establish an exciting set-piece. As such, you can expect the occasional divergence like a multi-ball boss battle. 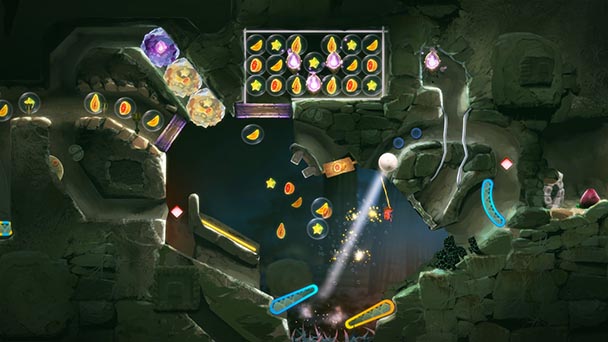 Those who play games like Zen Pinball will definitely have an advantage, hitting the skill shots needed to proceed with seasoned accuracy. For those less familiar with the pastime, doing things like passing the ball between flippers or aiming a shot might prove a little infuriating. This can lead to a pause in progress, or even worse regression where you’ll have to successfully nail a few shots again. For better or worse, the punishment is rarely too serve, causing Yoku’s Island Express to have about a six-hour playtime. While that might seem truncated for a twenty-dollar title, know that there’s little padding in the campaign.

Visually, Yoku’s Island is built with hand-drawn art that showcases voluminous clouds, verdant flora, and chiseled underground chambers. Given the anthropomorphic fauna and abundant flora, the game delivers a Ghibli-esque vibe, with Villa Gorilla stressing the splendor of the non-human world. Aurally, the game’s tropical tunes are melodic, mixing tropical influences with a few modern flourishes. 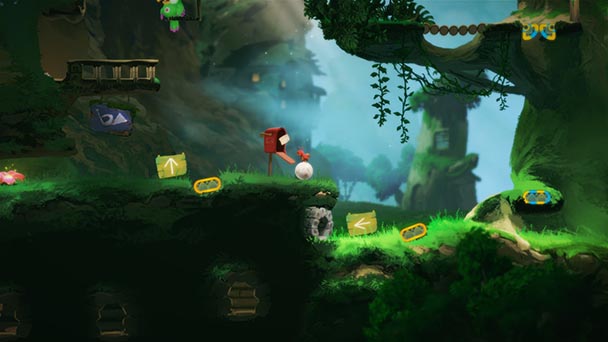 Every week, there’s a multitude of developers that combine mechanics, hoping to create synergy. Yoku’s Island Express’ concept of pinball in an open-world isn’t new, Sonic Spinball merged the two elements over twenty years ago. But Yoku is not carbon-copy, bringing brilliant level design and an easy-going approach to its island-based recreation.

Yoku’s Island Express was played on PC
with review code provided by the publisher.

Yoku’s Island Express
Platform: PlayStation 4, Xbox One, Switch, and PC
Developer: Villa Gorilla
Publisher: Team 17 Digital, Ltd.
Release date: May 29th, 2018
Price: $19.99 via digital download
Yoku’s Island Express review
Games consistently cultivate moods in players, whether it&rsquo;s the feeling of fear in the Resident Evil, Silent Hill, and Dead Space franchises or the humbling sense of frustration wrought in the Demon/Dark Souls series. But beyond Nintendo&rsquo;s output, few developers are able capture the sensation of unadulterated bliss. Undoubtedly, it&rsquo;s a much more difficult sentiment to nurture, requiring a fastidious amalgam of creative mechanics, an ample amount of polish, and an indulging aesthetic output. But amazingly, the two-person team at Villa Gorilla have nearly pulled it off. With the release of Yoku's Island Express, the Stockholm-based studio has crafted an&hellip;

Summary : Although Yoku's Island Express isn’t an exceptionally lengthy experience, it’s one that’s filled with persistent jubilation. Those with the slightest interest in pinball will want to book a visit to this delightful island.