Wipeout: In the Zone Review 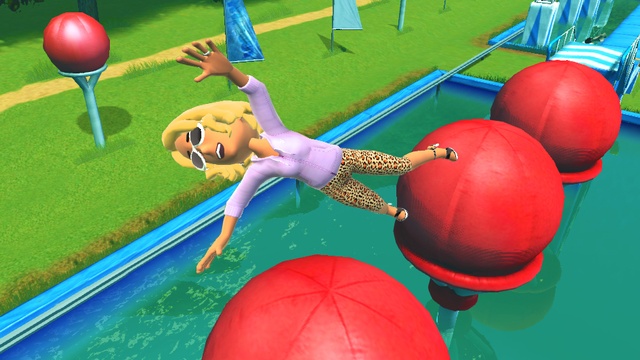 Adapting the physicality of ABC’s Wipeout to a console game isn’t an easy task. Promoted as “the world’s largest obstacle course” the popular reality show pits courageous contestants against tracks crammed with imaginative and oversized hazards. The recently released Xbox 360 translation uses the motion sensing capabilities of the Kinect to simulate players running, ducking, and jumping across a virtual version of the program’s courses. Yet, with a widespread unresponsiveness to the most fundamental commands, the title rarely immerses players in the action. Having your avatar repeatedly knocked off of a course due to control issues can make the offline Wipeout: In the Zone feel like you’re playing a particularly lag-plagued online game.

Although the title allows players to jump right into either single player mode or multiplayer competition, training in the game’s practice mode is highly recommended. While many of the In the Zone‘s movements ask gamers to replicate real-world actions such as walking, running and jumping, a few unintuitive commands exist. Two outstretched arms halts your avatar, while holding that gesture makes the player backpedal. In execution, the signal sporadically takes a second to be recognized by the game, which often results in the players being flung off the course by the slightest graze of a giant obstacle. Unlike the television program, avatars rarely attempt to save themselves. Giving the player a second chance certainly would have reduced Wipeout‘s frustration factor. 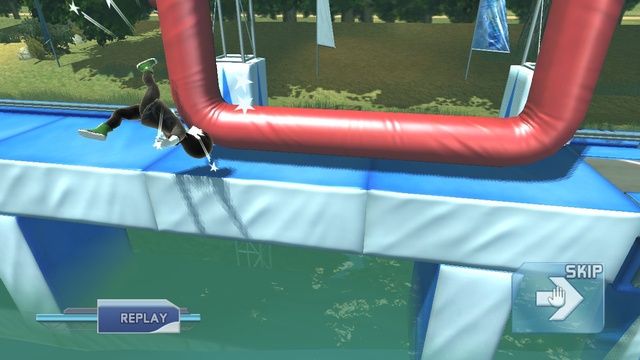 Sadly, forward movement exhibits even more imprecision than stopping. Initiating a walk or run from a standstill can take a second or two, which can shatter the window of opportunity to race past obstructions. Even more agitating, the game can suddenly stop recognizing your motion midstride, often putting the contestant in the path of an imminent hazard. Outstretching arms to balance an avatar across the rotating Logroll proved excessively challenging. each of the six people who helped review Wipeout couldn’t seem to rescue their on-screen persona from a pool-plunging lean.

Even the gestures that are consistently recognized by the game need to be anticipated. In the Zone’s elimination round requires participants to jump or dunk a huge spinning Sweeper arm. Here, the game changes the color of the bar to telegraph the timing of each movement. As a testament to the game’s unresponsiveness, players can raise their hands after a wipeout in the air to capitulate, and skip to the next section of the course. 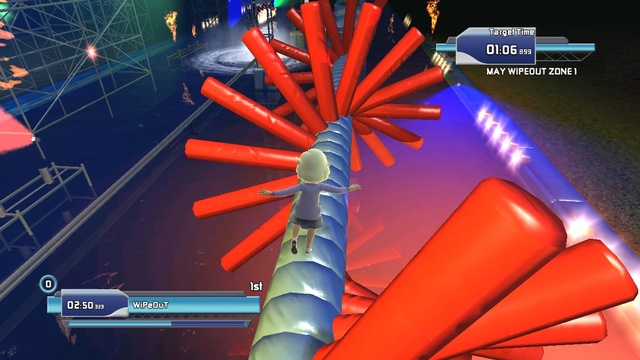 Despite these flaws, there are a number of elements in which do work. Sucker Punch- where players dodge mechanical fists which extended from a wall recalls the ducking and dodging of Kinect Adventures’ Reflex Ridge. In the Zone‘s famous obstacle Big Ball exaggerates gravity the confines of the human body, as avatars tumble wildly across a series of four gargantuan spheres. Jumps, indicated by a red section at the end of platform work consistently, are the other uncommon gesture which is identified with accuracy.Playing with a group of friends puts everyone at the game’s inequitable whims, resulting in consistently amusing avatar-tossing replays.

Graphically, the game employs avatars- offering caricatured versions of both contestants and the show’s trio of hosts. Considering the title’s simplistic visuals, Wipeout‘s initial load time is lengthy, sapping some of the energy from eager participants. Although commentary from John Henson, John Anderson, and Jill Wagner is delivered competently, sound bites repeat often and are prone to skipping, revealing the game’s middling quality. 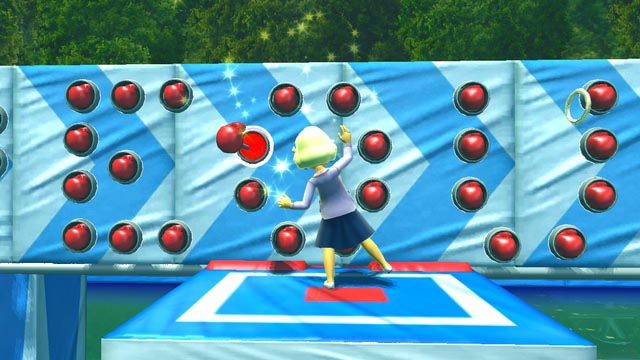 One of the guilty pleasures of Wipeout (the television show) is watching how a single careless misstep can lead into a cringe-inducing, pain-inducing plunge. Players contemplating a purchase of Wipeout: In the Zone are at a eerily similarly perilous precipice. Only a sadist could enjoy being a contestant  in this achingly unresponsive adaptation.

Previous: DualPenSports Review
Next: Transformers: Dark of the Moon Review