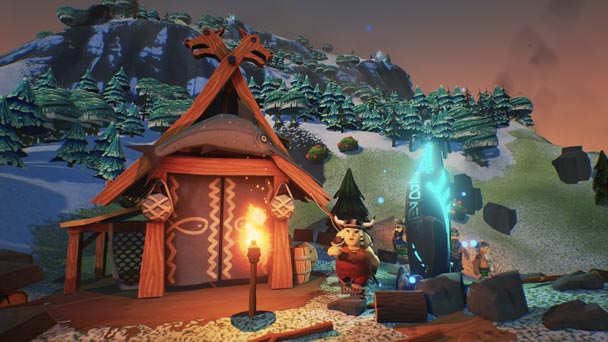 Games have taught us three things about the Vikings: they were ferocious fighters, passionate mead drinkers, and were only mildly industrious. The Early Access release of Funatics Software’s Valhalla Hills confirms these purported characteristics, extended a lighthearted take on ancient Nordic life that attempts to balance accessibility with absorption. Although this city builder still has a number of significant hurdles to overcome on its trek toward final build, there’s likely enough qualities to warrant a premature purchase from city-building buffs.

Valhalla Hills opening cinematic details the story of Odin’s forsaken son, Leko- an heir whose proclivity for construction is just a little too enthusiastic for the noble Norse-god. As such, Odin castigates his child, scornfully giving him a new title, “The God of the Builders”, before banishing him from Asgard. What follows is Leko’s chance for redemption, as he guides an ever-expanding band of disowned Vikings up to Valhalla’s summit. Just maybe, Leko and the Vikings’ arduous journey will be enough to convince Odin to open the divine gates. 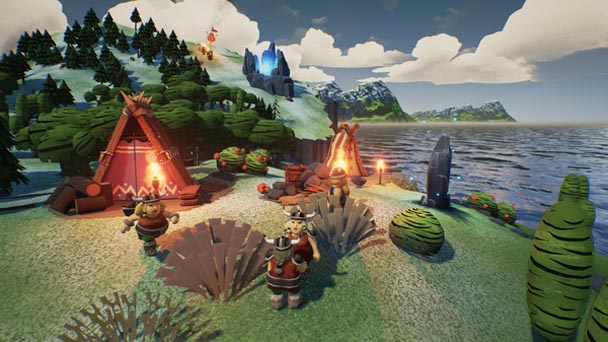 Play begins on a small island generated from a random number seed, with each successive stage taking place on a larger, steeper landmasses. Gradually, colonial Vikings plummet from the skies, landing near the Start Portal- a monolith that must be protected from malevolent forces. Without any structures on the island, the Vikings will subsist by plucking fruit and sleeping under trees. It’s you job to elevate their socio-economic level, building elements like production mills, lodges, and a military. To surpass each stage, the Vikings will have to make their way to a gateway that guarded with formidable enemies.

In execution, levels play out similarly. At first, players have to build the essential industries, from woodcutting workshops to stone cutting huts. This is accomplished by selecting the desired structure from a menu, then determining where you’d like to construct the building. Positioning of a shop is vital, with color-coded regions showing possible venues. Choose a green-hued site and you’ll benefit from a lowered material cost, since Valhalla Hills take into account elements such as the need for foundational platforms. Another factor in your decision is proxemics. Naturally, a plank-cutting facility needs to be build adjacent to a woodshop. 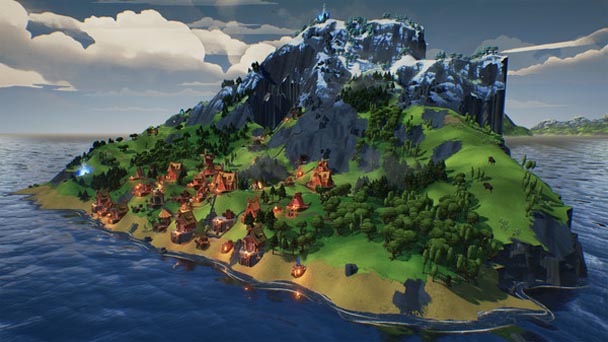 What’s remarkable about Valhalla Hills is that you won’t have control over the Vikings themselves, only the environment. Once you earmark a section of land for development, the Norse will act autonomously. If the construction site in near, they’ll typically start carrying some of starting supply of wood that’s kindly left near the Start Portal. Of course, if it’s too far, they’ll infuriatingly proceed to ignore it. While you can build road and trails to expand their wandering range (and increase their walking speed), your subordinates are often annoyingly stubborn, forcing a demolition and retry.

As such, each stage becomes a management conundrum, as players try to make the most out the island’s limited supply of natural resources. A finite amount of trees, rock, and pursuable animals mean that gamers will have to prioritize. Smartly, they’ll know the final peril they’re facing with a click revealing the how many gateway guardians are primed for the island’s conclusive confrontation. Of course, players don’t always have to rely on brawn, opting to build altars that will appease the antagonists, thereby reducing their forcefulness. 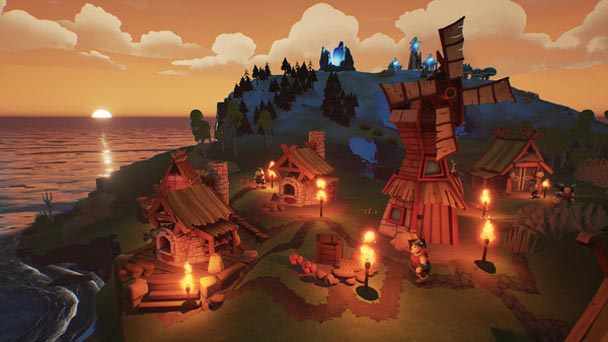 Between the Vikings’ obstinacy and Valhalla Hills’ lack of an illustrated tech-tree, players can run into problems. Although the game’s issues a steady stream of messages and warnings along the top on your monitor, finding out why you archers won’t equip bows can be a bit convoluted. Since advanced production techniques relies on secondary industries, it can be irritating to have to find out that a mead manufacturer has halted production because of a small kink in the supply chain. Another issue is repetitiveness. Although each stage issue new unlocks that bolster your building capabilities and bring new nuances, there’s a homogeneity to each level, as players repeat the same overarching task. On the upside, Valhalla Hills provides a leisurely pace especially in the early stages, with a dearth of antagonism until the egress is opened.

Built on the fourth iteration of the Unreal Engine, Valhalla Hills is quite a looker on a robust rig. With a GTX 770 we were able to achieve a steady sixty frames per second at the game’s current resolution ceiling, 1600 x 900 pixels. With the level of detail set to epic, Hill positively dazzles, delivering a cartoonish sheen to the proceedings, as trees, rocks, and production facilities lose no detail when viewed close-up. Additional features like stunning, spewing volcanoes and a day-night cycle with sumptuous lighting help complement the pleasingly animated characters. For some, the inability to rotate the camera around the island might be an issue. As it stands, you can zoom, pan, and tilt to gain a better v perspective, but occasionally an obstinate shelter will block your viewpoint. 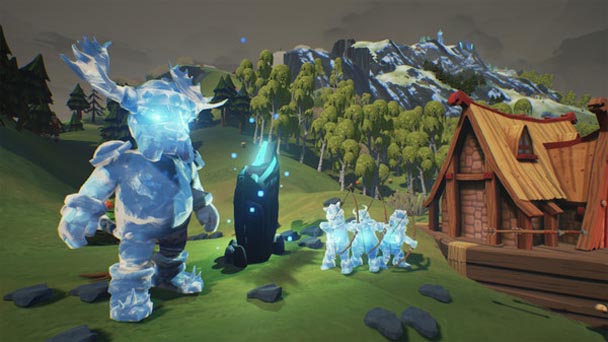 As Majestic once demonstrated with the RTS genre, giving unit autonomy can invigorate proceedings. Right now, Valhalla Hills’ decision to forgo direct control over characters feel promising, but can succumb to the sporadic frustration. But given Funatics Software’s history with The Settlers and Cultures franchise, there’s not too reason to doubt the studios ability to convert Valhalla Hills from an intermittently fatiguing trip to an stirring trek toward Asgard.

Valhalla Hills was played on the PC with review provided by the publisher.