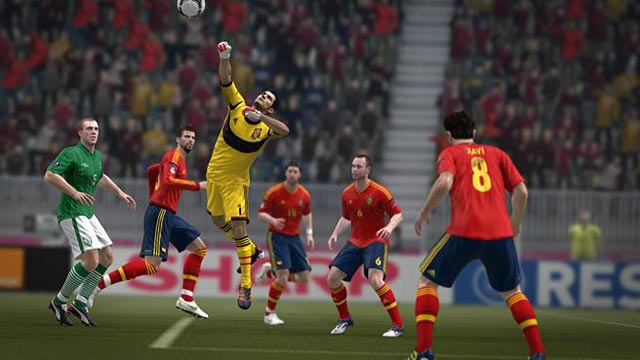 What is the concept? Traditionally, Electronic Arts’ tournament titles have been premium-priced boxed products. While games such as 2010 FIFA World Cup South Africa and UEFA Euro 2008 have permitted players to simulate the spectacle of each frenzied competition, these disks have consistently failed to match the amount of content found on a copy of FIFA Soccer. Following the advancement of digital downloads, players have often urged the publisher to release a downloadable update which could give gamers access to these stirring contests, while eschewing the characteristic sixty-dollar price tag. Available as an add-on for FIFA 2012 owners, UEFA Euro 2012 does just that. After plunking down $22.50 ($20 for PlayStation 3 owners) and downloading the 650 megabyte file, players are immediately transported to the Poland and Ukraine-based tourneys, without having to wait in line at their local game store.

Navigating to the plum-hued and flower-filled realm of the Euro 12 tourney is handled via a new tab in FIFA 12’s main menu. Here, players select one of seven languages for in-game text, as well as English, French, or Mexican Spanish match commentary. Following the selection of a preferred country, participants may immediately jump into an exhibition match or take on weekly challenges which task gamers with surmounting overwhelming odds amidst each historical scenario. Those seeking to jump right into Euro 2012, are ushered into a setup screen, where players may choose the sixteen squads which comprise the tournament’s group stage. Fortunately, if you’re a diehard Luxembourger, you won’t get isolated from the contest, as you can stack the deck with comparable teams, nearly guaranteeing a trip to the knockout phase. 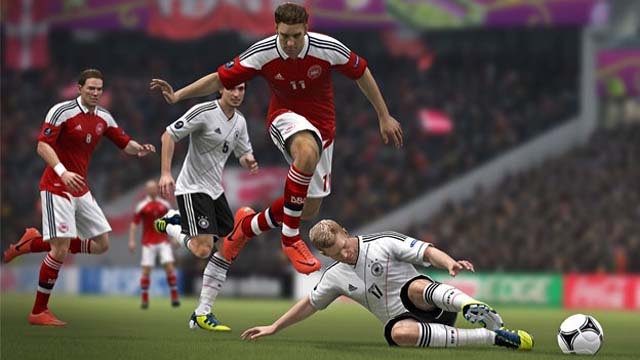 What are the game’s strengths? Beyond vying for the Champion Cup against AI, local or online competitors, UEFA’s highlight is the inclusion of Expedition mode. Here, players begin their trek by choosing either their FIFA 12 virtual pro or actual player, subsequently conquering the rest of the continent like a footie-fancying Napoleon Bonaparte.

Each country you outscore surrenders an additional athlete, which you may add to our team or reject, all in an effort to build the world’s most formidable soccer squad. Additional trouncings even offer up superior players, building the foundation for an engaging 156 match journey, as gamers sweep the region in an effort to build their dream team. Although the repetition might be too tedious for some, football fanatics will find Expedition offers an engaging alternative to cup chasing. 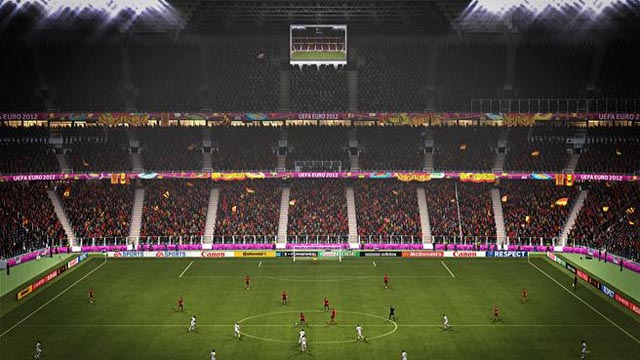 What are the game’s weaknesses? Beyond the addition of supplemental commentary and a new visual motif, UEFA Euro 2012 plays just like FIFA Soccer 12. While the last iteration of EA’s nineteen-year old franchise was certainly dexterous- improving the series’ dribbling, defense, and collision modeling components, UEFA feels woefully similar. Considering that the developers EA Canada used both the FIFA Cup and EUFA Euro titles to focus-test new gameplay tweaks, it’s a bit disappointing that EUFA 2012 feels like little more than a partial roster update and reskinning.

Concerning that ‘partial’ update: although UEFA 2012 gives players the official branding, confetti cannons and eight venues of the actual competition, of the 53 UEFA nations included in the download, only 29 teams are official licensed. Naturally, sticklers for realism are going to balk at the decision, especially when even host country Ukraine is provided with a glaringly fictitious roster. Not having the proper kits, faces, and names for a majority of the teams is destined to disappoint football fanatics. At the time of this writing, UEFA’s net-code couldn’t seem to match FIFA 12’s fluidity, with matches sporadically interrupted by spurts of slowdown. 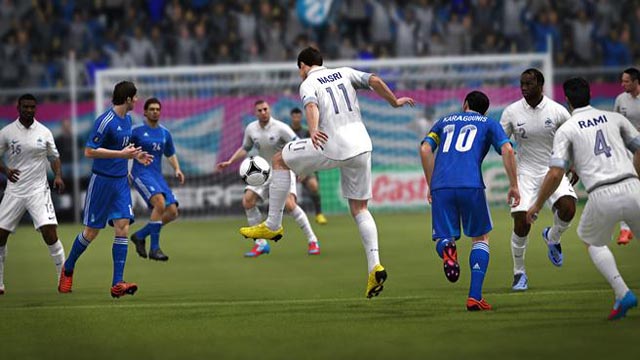 Is it worth the money? Over the years, Electronic Arts’ sports titles have persistently chased verisimilitude, offering a simulation that balanced playability and authenticity. While UEFA’s inclusion of an engaging Challenge Mode and absorbing Expedition component certainly demonstrate the former, a lack of inclusive team licensing tarnishes the later. While the publisher’s decision to deliver Euro 12 via a reasonably priced download is commendable, in execution UEFA Euro 2012 will likely stir up controversy amongst the title’s most passionate players.