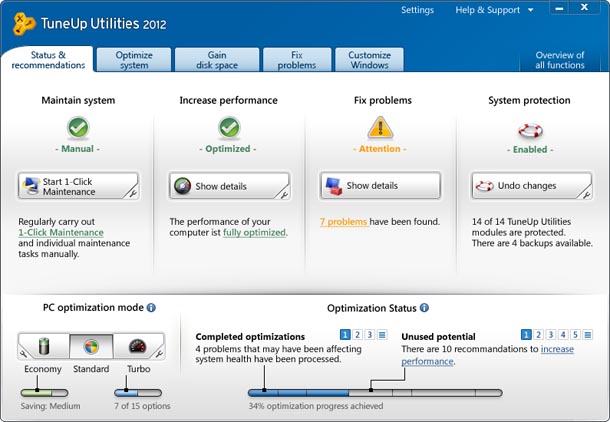 It’s the woeful inevitability that every PC owner must face: with time, the performance of your system will deteriorate. While obsessives advocate a fresh OS reinstallation every year to combat this quandary, for those without the patience to reinstall each application anew, TuneUp Utilities 2012 offers a comparable rejuvenation. Although system optimizers can be little more than digital snake oil (with the worst offenders doing irreversible damage to your system), the latest iteration of TuneUp offers a unified, uncomplicated method to perking up any sluggish PC.

To put TuneUp 2012 through its paces, we used the program’s three licenses to install a copy on radically different set-ups. System A was a three-year old, 17.1 inch, power slurping laptop with 22 programs installed. System B was a six month old portable, deliberately crammed with 60 different applications. System C represented a typical desktop setup- a core i5, 6GB machine, with 24 different applications present. While System A was running Vista, the other two setups had the 64-bit version of Windows 7 as their OS. 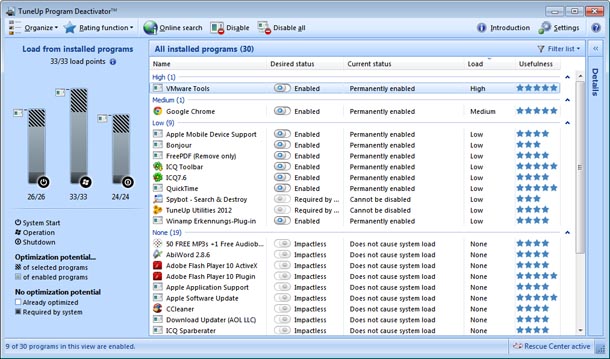 Since the applications users install tend to leave hide traces of CPU-cycle stealing code, one of TuneUp’s most effective tools allows the disabling both startup and well as latent programs. With the Startup Manager and Program Deactivator, owners have the ability to halt any unnecessary resource depleting applications. Shrewdly, TuneUp doesn’t remove the actual code (potentially rendering a program or piece of hardware inoperable). Instead, a single click toggles applications on and off, allowing users to easily and safely prune away the hooks which load superfluous programs. Disabling decisions are made effortless by a pleasing visual bar graph showing the potential benefits, along with a user-collected ranking of the usefulness of each application. When installed on our three different PCs, TuneUp 2012 was able to significantly reduce the startup and shutdown times as well as shave a 1-5% percent off idling CPU time each machine. Expectedly, System B’s bloated setup saw the most improvement, with the machine booting 50% faster and exhibiting a 5% decrease in rendering time for an effect-heavy video. 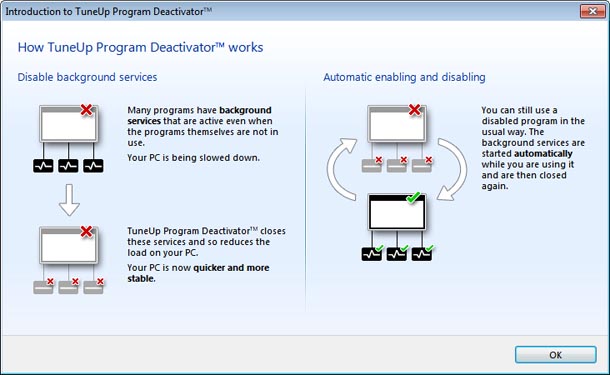 Beyond the reduction of unnecessary programs, TuneUp’s returning 1-Click Maintenance component allows users to keep their system performing at top speed. From scanning the registry for wayward entries, removing temporary files, to defragging any hard drives, this element ensures eradicates common PC ailments. Shrewdly, it’s smart enough to detect the presence of a solid state drive- asking permission before changing anything on a storage device with a limited number of write cycles. Conveniently, users can set up 1-Click to tidy things up at varying intervals and when the computer is idling, making maintenance nearly transparent for the average user. 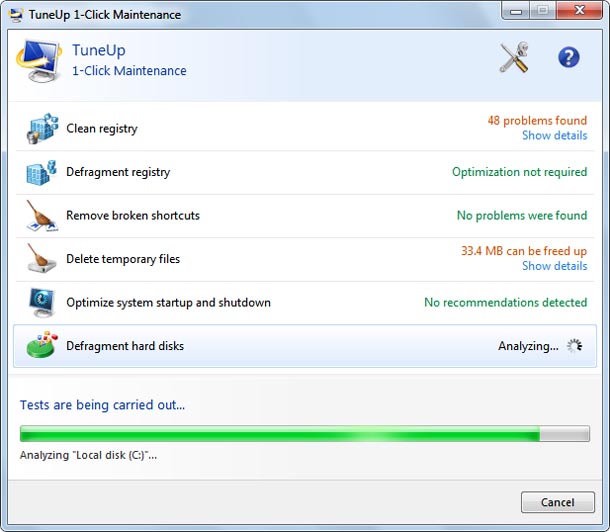 Beyond optimization, TuneUp is also capable of correcting several software problems. Although we did encounter a few false positives with System C’s generic (yet fully functional) keyboard and mouse drivers, the optimizer did grant the ability to recover recently deleted files, scan any hard drives for errors, as well as fix visual errors in Windows- such as a corrupted set of icons. Although it’s a colossal task, it would have been nice if TuneUp provided specific driver details and download locations, rather than recommending users to update their drivers through Window’s existing Device Manager. When a deliberate driver conflict or hardware effort was created, TuneUp 2012 was typically no more helpful than Windows in offering a solution. 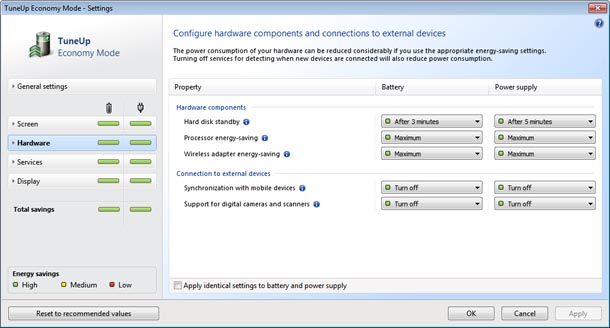 Last year’s iteration provided an advantageous Turbo Mode- which shut down nonessential Windows functions to lower CPU load. While that performance-boosting tool is back, it’s also counter-balanced by Economy mode, which targets power-intensive tasks in an effort to improve battery life. Although we expected negligible results and significant trade-offs with use, TuneUp proved undeniably beneficial. System A had struggled to get through a ninety movie without shutting down; with Economy Mode activated we got through 120 minutes of playback. System B was even able to make to the end of Saving Private Ryan’s 170 minute runtime, offering a significant amount of longevity to the typical power cycle. While Economy wasn’t designed for gaming, we were still able to play Age of Empires 2 20-25% longer on both systems with no perceivable reduction in speed or functionality. For applications which aren’t as processor intensive- such as using Word or browsing the internet, users can expect an increase of 5-15% more.

While TuneUp Utilities 2012 isn’t quite the panacea capable of remedying all of Windows woes, each of the optimizer’s core lag-reducing and efficiency-boosting measures are dependably safe and undeniably useful. Considering the program offers an effortless way to return your PC to day-one performance levels, TuneUp gets an unmitigated approval, especially if users can find the tool for less than its fifty dollar MSRP.