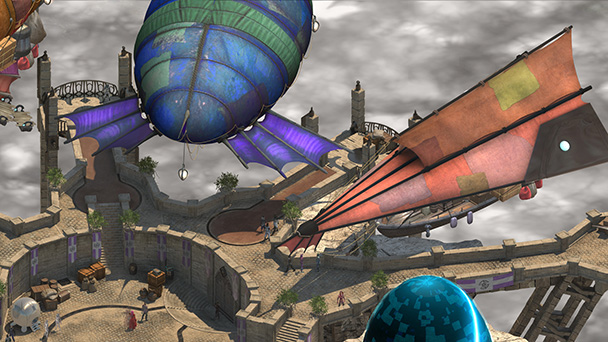 Most contemporary role-playing games have digressed from their table-top roots. Modern narratives rarely reflect the type of bookish descriptions articulated by human game masters, extending oft-sterile cinematics for exposition. While combat might be turn-based, an emphasis toward accessibility has simplified conflict, frequently reducing battles into a predictable, grindy affairs. And all too open the sense of autonomy given by many RPGs is a pretense, as players are pushed down discrete paths or dialog selections are woefully ephemeral. When choices do matter, they tend to fork into obvious outcomes, diminishing any sense of discovery and wonder.

That’s not the case with Torment: Tides of Numenera, a title which demands the concentration of PlayStation 4, Xbox One, and PC owners. With a storyline rooted in the existential, a plethora of keenly disguised variables that subtly have long-term influence on events, and appreciation for player freedom, the title is far removed from the breezy affairs extending by most contemporary role-playing experiences. It’s a title  that asks quite a bit from gamers, but offers a payoff that pays ample dividends on any investment of time. 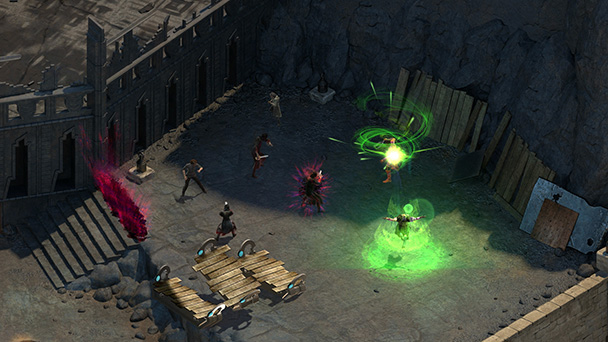 First a bit of backstory: while many veteran players have wished for a follow-up to 1999’s acclaimed Planescape: Torment, a few niggling issues have stymied the production of a follow-up. For one, Wizards of the Coast have forcefully clung to the multi-dimensional setting, purportedly wanting a small ransom for IP rights. But more importantly, Planescape: Torment was a saga without need of elaboration or continuation. Achieve the ‘good’ ending and The Nameless One’s story offered closure; any additional anecdotes might dilute the impact of the original narrative. So for Torment: Tides of Numenera, inXile Entertainment retains the metaphysical context of Planescape, while changing the setting to Monte Cook’s Numenera, extending a venue that represents earth one billion years in the future.

Unfamiliarity with the table-top game and its ninth-world mythos that details an octet of fallen civilizations isn’t an impediment. Instead, uncertainty about the world and your circumstances dovetails with the storyline, as the game’s protagonist “The Last Castoff” is cast into the nebulous setting, literally plummeting from the skies above. Soon you’ll learn an additional morsel of your backstory- that you’re the discarded shell of a deity known as The Changing God, who inhibits new bodies and discards the used husks they way we shed the shrinkwrap that seals retail games. 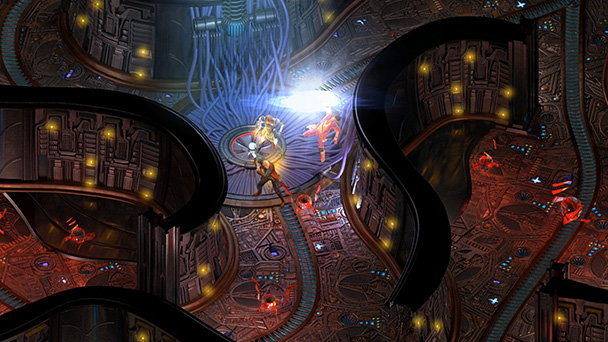 Given that a majority of role-playing games instill the responsibility of world savior onto players, stepping into the role of sentient refuse offers a spirited change of pace. But smartly, you’re not exactly incapable, with each subsequently shucked shell growing in power. Moreover, you’ll soon encounter others who share your existential predicament, revealing a fascinating crew of castoffs that help solidify Tides of Numenera’s storytelling. Much of the enjoyment stems from learning the details that surround your fate and discovering your role within the game’s imaginative tapestry of characters. In that regard, the title makes you work for every shred of insight. With implied references and the lack of any kind of in-game encyclopedia, Torment makes your work for each morsel of its juicy mythos.

Although there’s some voice acting, the vast majority of Torment: Tides of Numenera’s exposition is articulated via text, necessitating a substantial amount of reading. In an era where a growing constituency of gamers prefer to watch YouTube personalities play games rather than actually read critique, that could be a significant hurdle. But reading has it manifest merits, with Torment’s prose able to offer superior world building than a pile of Pascal GPUs. Delve into the game’s exemplary writing and imagination will cultivate much more than a mass of polygons and transitory exchanges of banter. Tides of Numenera is an unabashedly literary experience, and all the better for it. 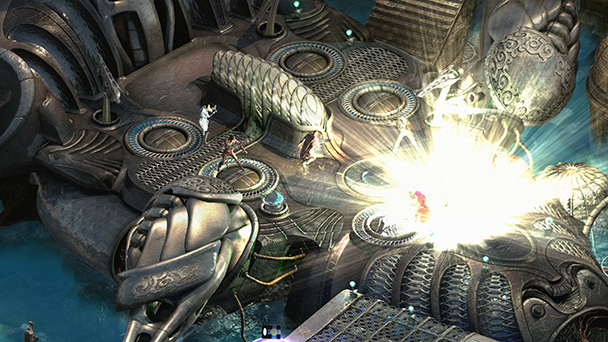 Evidence of this is rooted in the game’s prologue which funnels players into three loose classes via a cunningly implemented personality quiz. As you answer how you’d react to certain situations, you’ll gradually gravitate toward the Glaive, Nano or Jack achitype,  which vaguely translate toward an emphasis on combat, Numenera’s science-rooted take on magic, or a balance of the two. More importantly, you’ll discover that the game inspires your to actually role-play, cultivating a character and making him/her your own, rather than adapting to a pre-made personality or clichéd adventuring trope. After repeatedly adapting to the whims of writers, taking control of The Castoff can feel liberating, with design built around the myriad of player decisions rather than trying to create an ersatz feeling of freedom.

Take combat, which is often one of the fundamental components of role-playing. Here, it’s almost always avoidable, if you choose. Cultivate a silver-tongued protagonist and you can charm your way out of conflict (called “crisis”), or for the cunning, exploit one of your skills to create a diversion that diverts flaring tempers. But for players who favor pugnacious over propriety, Tides of Numenera is ready to oblige, pitting your party of up to four characters against an often larger pool of adversaries. But even then, expect to find nuance. NPCs may object your pugnacious demeanor, and permanently leave or if they feel you’re really being unfair, take up arms against you. Pleasingly, there a nice sense of variety during encounters, where the option to use the skill-check system to increase your hitting percentage is a persistent temptation. 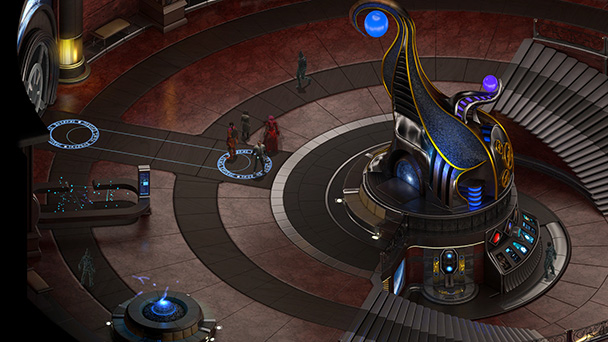 Variability also extends to other elements. The eponymous Tide mechanic is a five-attribute system that shirks the traditional judgmental variables of most role-playing games. Instead, color-coded components shift like waves, altering with each distinction. What’s fascinating is the theory behind them, that shirk the conventional good and evil dichotomies. Instead, each tide symbolizes a belief system, whether it’s the red tide that represents passion toward situations or indigo that signifies valuing law and order. With Torment it’s perfectly ok to play aloof or value bond over law and the ethical relativism will fascinate drawn to ethical dilemma. Just don’t expect others to ignore your tides. Depending on your actions, NPC will act remarkably divergently.

Then there’s the aforementioned skill-check system which allows an impromptu augmentation of your intellect, might, or speed. While circumstances that require high-level values abound, the mechanic allows for the sporadic circumvention, by permitting your party to pull from a pool points. In execution, it’s wonderfully thorny. With plenty of opportunities to transcend your skill limits, there’s always the notion you might need the points for later in the day. Fortunately, your skill points renew with an overnight stay, renewing your possibilities at regular intervals. 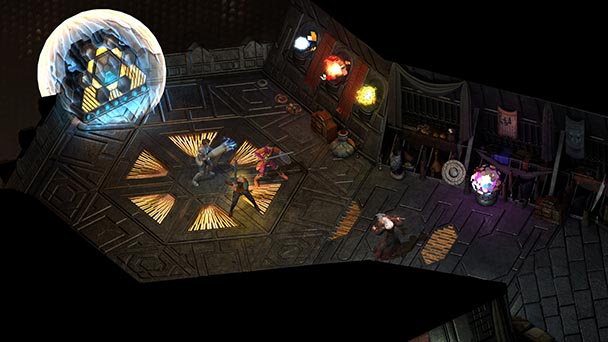 About the only area where Tides of Numenera disappoints, is its visual delivery. Built on the Unity engine, Torment sporadically lurches about, advancing a limited amount of animation. But largely judging the title for its graphical output is problematic, this is an experience driven by the power of language and the sensation of player autonomy. But if you are visually oriented, keeping your expectations in check might be a wise approach.

Focusing far more on choice and consequence that routine combat, Torment: Tides of Numenera is far removed from most contemporary role-playing games. It’s a title that beseeches replay, just so you can appreciate how complex the plethora of permutations go. For anyone who laments that electronic RPGs don’t match the mutability and enjoyment of table-top experience, Tides of Numenera is an experience worth pursuing.

Torment: Tides of Numenera was played on the PlayStation 4
with review code provided by the publisher.

Torment: Tides of Numenera
Platform: PlayStation 4, Xbox One, previously on PC
Developer: inXile Entertainment
Publisher: Techland Publishing
Release date: February 28th, 2017
Price: $49.99 via PSN, XGS, and Steam
Torment: Tides of Numenera review
Most contemporary role-playing games have digressed from their table-top roots. Modern narratives rarely reflect the type of bookish descriptions articulated by human game masters, extending oft-sterile cinematics for exposition. While combat might be turn-based, an emphasis toward accessibility has simplified conflict, frequently reducing battles into a predictable, grindy affairs. And all too open the sense of autonomy given by many RPGs is a pretense, as players are pushed down discrete paths or dialog selections are woefully ephemeral. When choices do matter, they tend to fork into obvious outcomes, diminishing any sense of discovery and wonder. That&rsquo;s not the case with&hellip;

Summary : Torment: Tides of Numenera demands a lot from players, put pays out substantial dividends. Here, Player choice and narrative are paramount, bringing a freshness to the role-playing genre that’s been long absent.