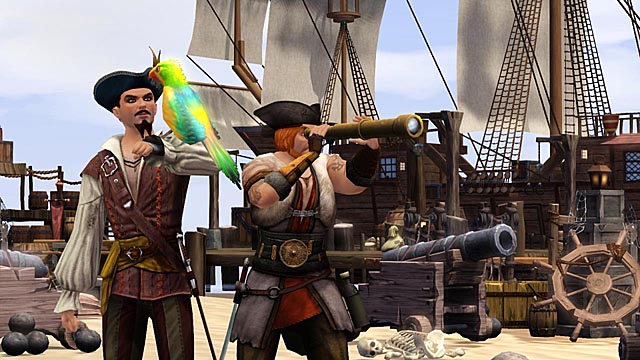 As it best, gaming allows players to experience the extraordinary. From throwing a Superbowl winning pass in Madden NFL to flaunting the capoeira prowess of Tekken’s Eddy Gordo, the medium’s ability to deliver vicarious thrills is unrivaled. Despite its overwhelming popularity, the Sims series has largely shunned the incredible, by providing a broad simulation of the mundane. I’ll admit I have never quite understood the allure of watching a virtual persona shower, sleep, or perform any of the other tedious tasks which occupy the average person’s waking hours.

Smartly, The Sims Medieval corrected that complaint by transporting players to the Middle Ages. Abandoning the openendedness of metropolitan life for a series of gratifying role-playing quests, Medieval rescued the series from suburban malaise, delivering both an intriguing setting and satisfying sense of direction. Recent expansion pack Pirates and Nobles expands the game’s environment even more, pushing players into a conflict between two divergent groups. 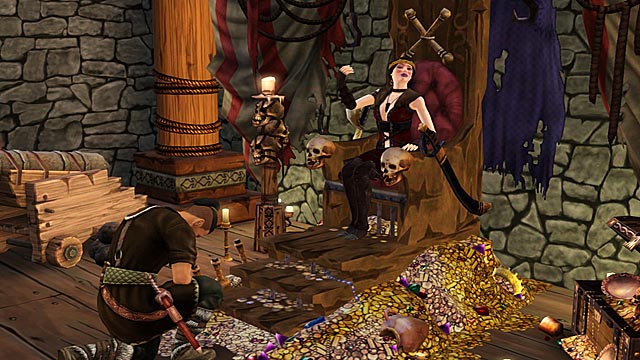 Both factions deliver the obligatory wardrobe additions, allowing seadog sympathists to don tricornes and buccaneer garb while the aristocrats are adorned in elegant robes, leggings, embroidered gowns, and elaborate headgear. Likewise, a treasure trove of new furnishings are available for sovereigns to purchase. Although the noble’s ornate riches are tempting, a room lined with Jolly Roger flags, crossed sabers, and candles erupting from skulls has an undeniable appeal. Bird fanciers should enjoy Pirates and Nobles’ inclusion of parrots and falcons, which allow players to send their feathered friends to hunt or assault other sims. Avians also serve an additional function- scouting the location of buried treasures. As expected for a pirate-themed expansion, gamers will be take shovel to sand in an effort to uncover underground loot.

Torturous-minded gamers may also enjoy the expansion’s interrogation chair (which recalls the Sims 3’sInternation Super Spy interviewing). The object here is to break an enemy’s will while maintaining their consciousness by using methods like feather tickling, water dosing, or forcing prisoners to peek inside a mysterious box. While it’s a far cry from being a simulated Guantanamo Bay, extracting information from Sims is a devilishly enjoyable excursion. Hopefully, future expansions will additional opportunities for mischievous mayhem. 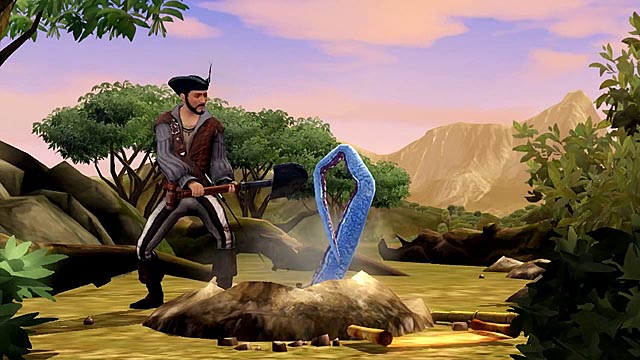 Despite Pirates and Nobles accomplishments, a few presumed supplements were left in Davy Jones’ locker. Gamers expected an increase in the size of their kingdom will be disappointed to discover that the expansion doesn’t increase the size of the Sims Medieval’s realm. Likewise, those yearning to broaden their empire with a collection of castles are still confined to owning a single fortress. While the expansion’s new ambition “Peacemaker” offered a helpful tutorial (assisted by an encyclopedic “lessons” component), novices stumbled over a few of the game’s early assumptions.

Performance-wise, Pirates and Nobles shrewdly scales to a number a number of rigs. Running the game on both a mid-level notebook and desktop with integrated graphics was entirely feasible, as long as the game’s visual luxuries were toned down. Simlish notwithstanding, the pack’s audio is immaculate, with flute-filled melodies and cheerful chanteys to serenade players across the sixteen new quests. 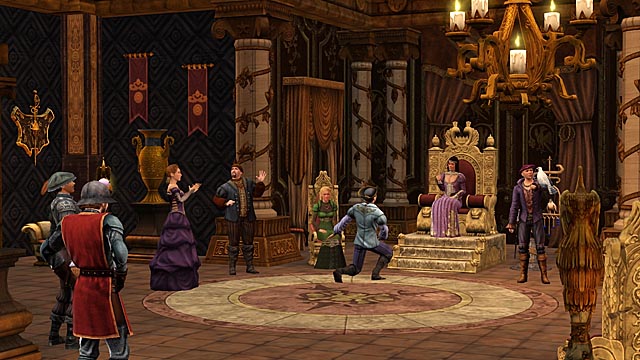 By omitting items such as peg-legs, hook-hands, mounts, and grand ship battles, The Sims Medieval: Pirates and Nobles doesn’t deliver the consummate buccaneer and baron experience that players might be hoping for. Despite these exclusions, the expansion pack does have the ability to rekindle interest in Medieval, especially for players who have a longing for pirate lore. Like many expansions, the title offers just enough content so that Sims supporters don’t feel that they are forced to walk the plank.