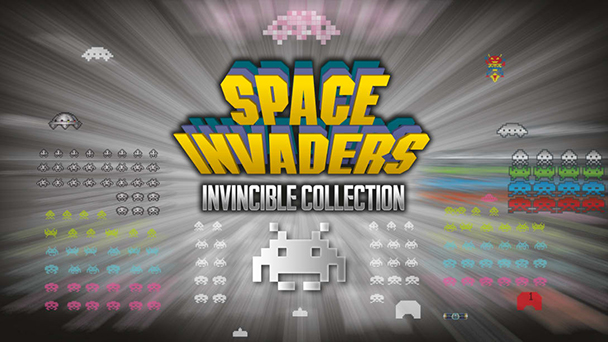 Space Invaders Invincible Collection mostly lives up to the title, offering ten of the franchise’s most prominent entries, along with some underappreciated Taito gems.

32 years later, it’s all too easy to overlook Tomohiro Nishikado’s contribution to popular culture. But the engineer’s most remarkable creation, Space Invaders, would stimulate the proliferation of arcades, quadruple Star Wars’ box-office grosses, as well as inspire industry luminaries like Shigeru Miyamoto and Hideo Kojima. While the rumor that the game led to a shortage of 100-yen coin in Japan might be urban legend, few would argue about the game established the foundations of the shooter genre. 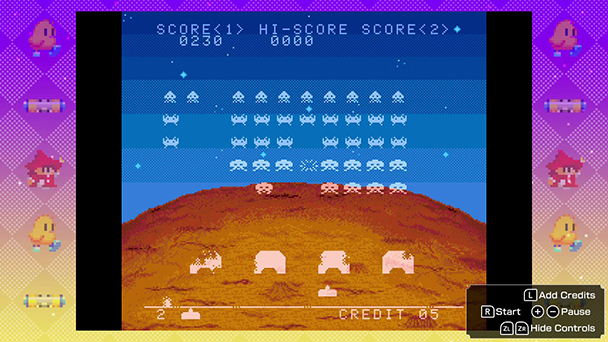 1978’s Space Invaders arrived in a multitude of formats. Those who grew up in the West are likely to remember Midway’s mirrored display cabinet, which reflected the game’s visuals on the backdrop of a planet surface. The Invincible Collection opts for the original Japanese release, where aggressors and your ship are rendered in a stark blank-and-white. The collection also includes the revision which used a color monitor, while emulated a previous iteration which had used transparent cellophane to add some red, cyan, and purple hues to the game.

The following year Taito’s Space Invaders Part II was quickly released, with the intent on capitalizing on its predecessor’s success. The time the aliens put up a tougher fight, calling in reinforcements to fill their formation in the third wave, as well as enemies that split into two. While the Invincible Collection doesn’t offer a comprehensive amount of history, sidebars reveal details such as Part II’s innovative leaderboards and how it was the first Japanese game to be protected by copyright.

Revisiting the first trio of Space Invaders titles demonstrates just how innovative the property was. Poking your ship out of protective barriers to quickly aim and fire at enemies recalls the comparable mechanics of modern cover-based shooters. The series persistently keeps players active, eliminating enemies from both sides of the formation before they can touch down. While the visual might seem dated, play remains intense four decades later. 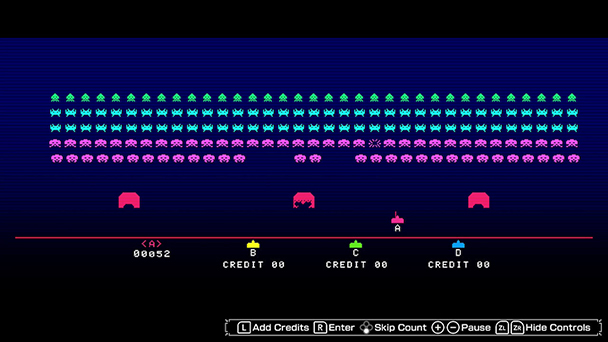 Space Invaders Gigamax 4 SE is an interesting deviation from the original title. It’s a port of a timed exhibit from 2018’s “Play! Space Invaders” which broadcasted the game on the walls of the Tokyo City View observatory. Here, the multiplayer aspect has been scaled down from ten to four players. Woefully it’s limited to local participants. As a solitary experience, the spacious playfield dwarfs your tiny ship, making progress painfully slow.

But with a quartet of partners the title truly shines. Here, teams tackle formations of invaders across a succession of stages that should take about 30-40 minutes to compete. While the game’s visuals recreate the same pixeled ship, barriers, and enemies, the fights bring a number of new developments. The most remarkable is an offensive shot that grows in power when player ships are adjacent to each another. As such, coordination is needed for success, especially against boss battles against an enemy that fills that playfield. Just make you’ll need to have friends with their own copy of Invincible Collection (or presumably Space Invaders Forever) before getting excited for Gigamax. 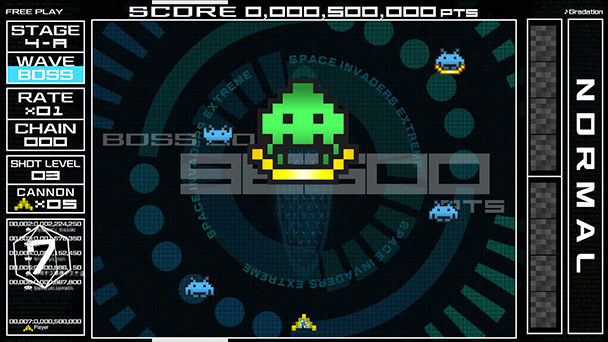 Soloists will likely find more enjoyment with Space Invaders Extreme. Originally released for the Sony PSP and Nintendo DS, Taito’s title makes a pleasing addition to package. In keeping with tradition, the player controls a canon that shifts left and right, while shooting skyward at enemies. But here, psychedelic visuals, an energetic electronic score, and shot enhancements provide distinction. Shoot four consecutive enemies of the same color and a power-up will drop from the sky. Grab, for example, a blue one, and you’ll temporarily fire a powerful laser beam that can sear through invaders.

Destroy two sets of similarly colored aliens and a UFO will make it away across the screen. Shoot it, and you’ll be able to tackle a bonus round, where you’ll face challenges like eliminating a specific number of adversaries in a brief time span. Success pushes players into Fever Time, where they’re offensive output is boosted even more. As such, there’s a strong sense of momentum in each game. If maintained, the offensive output can help you through Exteme’s branching procession of stages. Sadly, the multiplayer mode that made it into the Xbox 360 iteration is nowhere to be found. 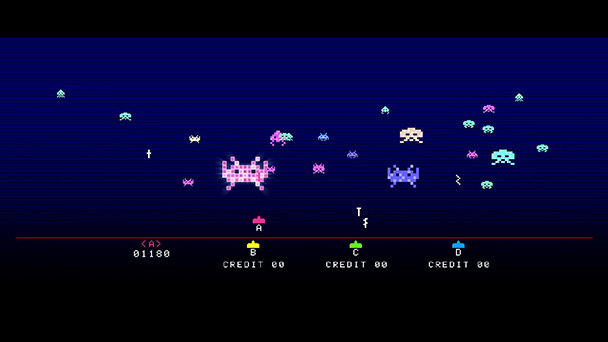 The Nineties produced a number of serviceable Invaders entries, as evidenced by the collection. Majestic Twelve brought branching stages, optional cooperative play, and power-ups to the basic formula. The speed of the game notable increased, while aliens tended to move in evasive ways. Majestic Twelve’s innovation was an amusing bonus round where players protecting cows from UFOs attempting ‘cattle mutation’. Super Space Invaders 91 plays similarly, but without any stage selection.

Space Invaders DX shows Taito having a bit of fun with the series. Beyond options for Normal and VS modes, there’s Parody Mode, which imports sprites from Taito titles such as NewZealand Story, Rainbow Islands, and Darius. 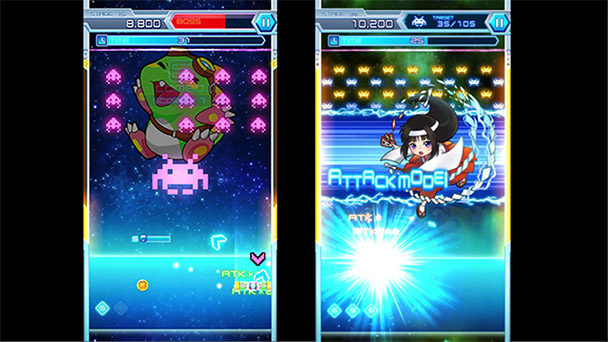 Inexplicably, Arkanoid vs. Space Invaders is included as a separate rather than bundled with the rest of the compilation. It’s an engaging effort, with the paddle-like craft known as the Vaus repelling enemy shots instead of keeping the ball in play. The object here is to remove all the invaders from each stage before the timer expires. Fortunately, you’ll receive an abundance of help. Some stems from optional power-ups you can select before a stage. Other assistance is found in a meter, that when filled, activate each character’s special ability, which can turn the tide for you. Like Arkanoid, you can also expect a steady shower of power-ups to rain down from above.

So, what’s the downside? Arkanoid vs. Space Invaders is a pretty plain port of the original mobile title. That means you’ll be forced to hold your Switch vertically and direct the Vaus with your finger. While this light be fine for Switch Light, playing on a regular Switch can lead to sore wrists. Regretfully, there’s no option for docked mode play or any other control method except for touchscreen use. Still, it’s hard to shake the celebratory feel here, with Arkanoid vs. Space Invaders boasting 40 forty different Taito characters. And if you’re looking for storyline in the franchise, this is one of the few places you’ll find it. 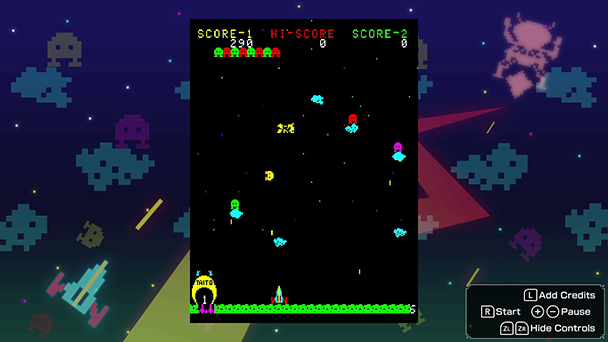 Finally, there are two Taito games that may lack the ‘Invaders’ moniker but make worthwhile inclusions. Lunar Rescue plays like a mix of the Lunar Lander and Space Invaders, with players dodging objects and landing a pod on a designated platform to pick up stranded astronauts. Then, you’ll escort them to a mothership, shooting any enemies who get in your way. Lunar Rescue might be old but it remains enjoyable.

Space Cyclone must have seemed pretty revolutionary when it released in 1980. This time the invaders ride clouds and more erratically through the air, much like the birds in Phoenix. Allow them to touch down and they’ll begin to build a weapon, firing a large cyclone-like weapon at players. Visually, the game’s much more kinetic than Space Invaders, while the audio boasts a trio of phrases spoken by a speech synthesizer. While not as enjoyable as Lunar Rescue it’s an interesting curio. 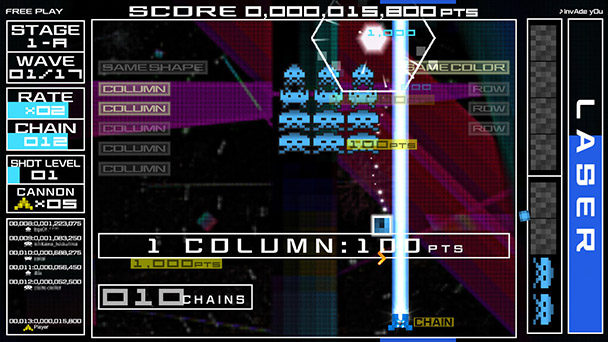 Given Space Invader’s renowned place is game history, the Invincible Collection does a serviceable job at memorializing the property. The supplementals are slim, with a few paragraphs of context and the option for a Challenge Mode which adds a bit of variation to each title. And then, there’s the cost, which at sixty dollars, is priced a bit higher than comparable anthologies. But none of these transgressions are severe enough to exclude the compendium from being a part of your retro library. Given the spot-on emulation and the agreeable interface, the Invincible Collection nearly lives up to its boastful name.

Space Invaders Invincible Collection was played on Switch with
review code provided by the publisher.

Space Invaders Invincible Collection review
Space Invaders Invincible Collection mostly lives up to the title, offering ten of the franchise&rsquo;s most prominent entries, along with some underappreciated Taito gems. 32 years later, it&rsquo;s all too easy to overlook Tomohiro Nishikado&rsquo;s contribution to popular culture. But the engineer&rsquo;s most remarkable creation,&nbsp;Space Invaders, would stimulate the proliferation of arcades, quadruple&nbsp;Star Wars&rsquo;&nbsp;box-office grosses, as well as inspire industry luminaries like Shigeru Miyamoto&hellip;

Summary : The Invincible Collection does Taito’s franchise justice, even if the premium price makes the collection just as elusive as that UFO that eternally floats by.