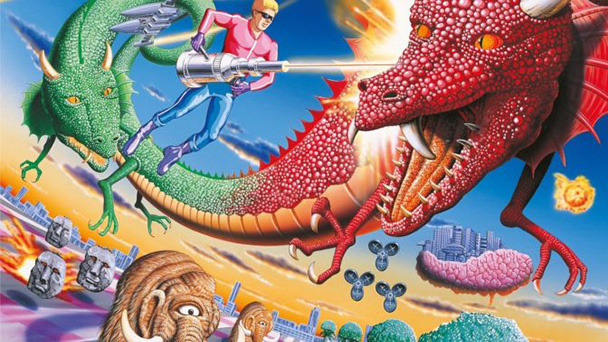 And that’s precisely the method adopted by Abiko-based M2 Co., Ltd. Whereas other developers might take a slightly laxer approach to emulation, M2 seems committed by historical preservation. This attitude is evident when examining the developers’ latest additions to the Switch eShop, SEGA AGES Space Harrier and SEGA AGES Puyo Puyo. Although both titles might feel rather dated, M2’s accuracy in recreating these the games is up to their obsessive standards.  Pleasingly, the studio even adds a few basic, noncompulsory elements to each title. 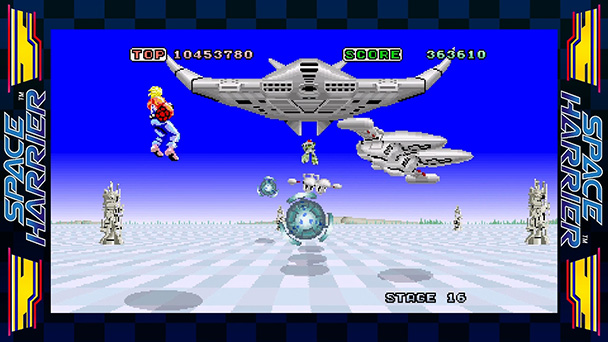 Designed by Yu Suzuki, the auteur behind classics like Out Run, Virtua Fighter, Daytona USA, and Shenmue, Space Harrier is probably best remembered for its distinctive visual style. Built with a custom chip for drawing, rotating, and scaling up to 128 simultaneous sprites, it likely seemed staggering when the coin-op was released in 1985. Coupled with a color-cycling checkboard bitmap (for ground and occasionally, ceilings), it was an admirable early attempt at simulating breakneck three-dimensional movement. Sporadically, Space Harrier even offered a hydraulic seat that roll players back and forth, boosting the perception of flight even further.

But as a game, Space Harrier doesn’t quite resist the ravages of nearly thirty-five years of time. Players assume the role of the eponymous jet-packing lead who can move around the screen, while his weapon fires projectiles towards an invisible vanishing point. At first, it’s fairly easy to evade hazards while targeting foes. But across the game’s collection of eighteen stages, evading environmental objects and projectiles becomes increasingly difficult, prodding players into tense evasive patterns. As the screen fills with more sprites, occasionally it can be challenging to distinguish just which one you collided with. 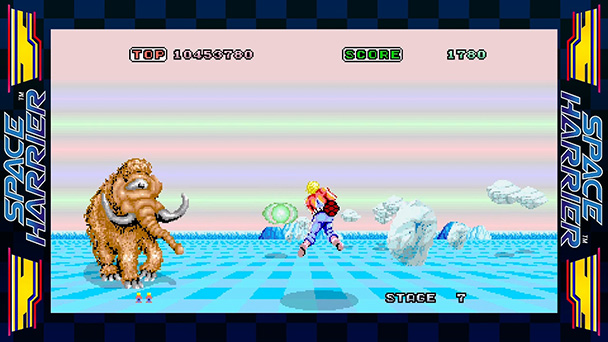 While SEGA AGES Space Harrier allows you to replicate the original arcade experience, there are a few noncompulsory modernizations that help offset the high challenge level. Auto-fire puts out a constant barrage of shots, helping fingers stay un-calloused and the longevity of JoyCon buttons. Meanwhile, ‘Komainu Barrier Attack’ brings the two lion-like creatures that guard the front of Shinto shrines to offer a bit of shielding. These can absorb one hit of environmental damage before needing time to recharge, but they don’t protect against projectiles, so you’ll still have to be observant. You can check the online leaderboards, and even download their replay. Doing so reveals that almost everyone opts for auto-fire. 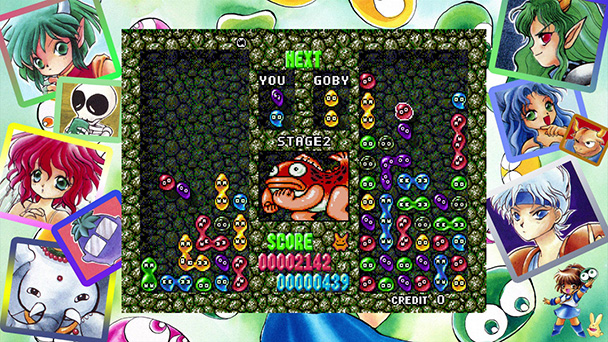 Originally developed by Compile in 1991 for the MSX2 and Famicom, Puyo Puyo was adapted into an arcade release the following year. Unsurprisingly, coin-operated version focused on competitive play, with the game’s single-player mode where you took on a succession of CPU-controlled characters.

Additionally, the primary arcade release shirks many of the variations and deviations that players might remember from the franchise’s numerous sequels and localizations. Not only did Dr. Robotnik’s Mean Bean Machine and Kirby’s Avalanche insert new sets of characters, but they also changed plotlines, and music tracks. Meanwhile, modern modifications like Fever, Endless, Mission, and Challenge mode are absent, making SEGA AGES Puyo Puyo feel a bit like a barebones affair. 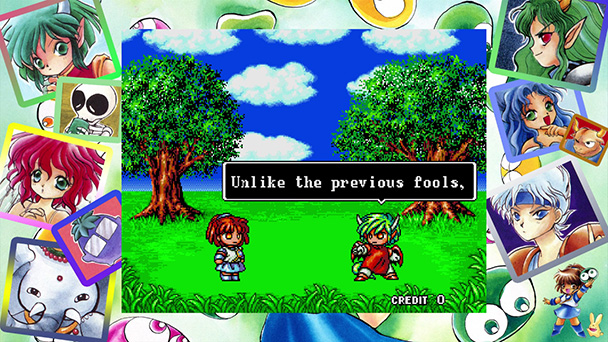 You’re still dropping pairs of gelatinous creatures. When they come in contact with four or more Puyo of the same color, they disappear from the screen, helping to avoid a gaming ending situation where the slime-like beings fill your entire playfield. Winning revolves being able to create chains, where successions of Puyo are removed, and subsequently fill up your opponent’s playfield with ‘nuisance’ pieces. Those with a mind that is able to think several steps ahead will undoubtedly have a great time with almost any Puyo Puyo iteration.

Fortunately, M2 added a few elective elements. The original arcade game embraced economy with its control scheme, permitting players to rotating their Puyo clockwise. Comically, the game manual explains that “technological advances” not allow players to turn pieces in the opposite direction, easing play. Another appendage is the ability to spin a pair of Puyo in narrow alleys where they probably shouldn’t be able to physically rotate. Purists will be pleased to know that both inclusions can be turned off, allowing you to play Puyo Puyo in proper 1992 style (with Megumi Hayashibara’s “Whatever” playing in the background, of course). 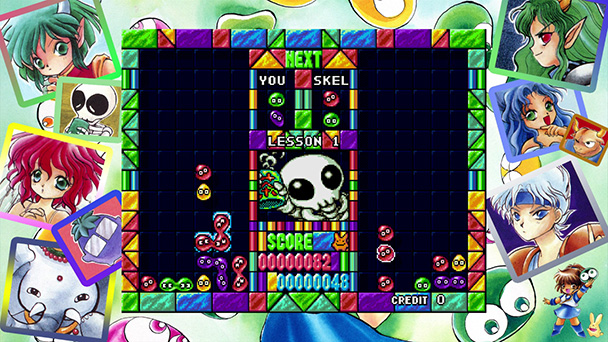 The other principal appendage is the inclusion of online play, simulated the experience of challenging someone on the other side of the cabinet. While it’s a respectable addition, all too often the action succumbs to instances of debilitating slowdown, disrupting the pace of the game. While the impact wasn’t ubiquitous, it did affect more than half of the twenty random matches we played. Hopefully, the ability to create your own room and challenge more geographically-adjacent adversaries might lessen the lag.

Both Space Harrier and Puyo Puyo are significant entries in the archives of arcade history. Masterfully, M2 brings both to the Switch in flawless form, with players able to join both titles in their original arcade form. Given the age of each, the developer has also added a number of smart additions, bringing each game in line with contemporary standards. The only critical omission is accompanying documentation. It would be great if M2 chronicled information about the development of each title, possibly with the inclusion of photography.

SEGA AGES Space Harrier and SEGA AGES Puyo Puyo were
played on Switch with review codes provided by the publisher.

Edit: Previously, we referred to the games as being “emulation”. Technically, they are enhanced ports.