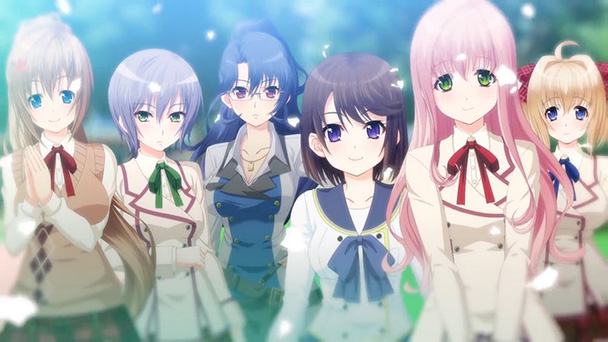 Initially, Song of Memories resembles yet another romantic harem comedy. You’ll assume the role of Minato Kamishiro, a second-year student at the Ouka Acadamy. Reprimanded for ogling an excessively busty rhythm gymnast rehearsing after-school, Minato’s ordinariness makes him an archetypical protagonist for a dating simulation. But when news reports detail a mysterious virus overseas, purportedly turning people violent, Memories signals that it might venture from a well-worn path.

Soon, we learn that Minato and his adopted sister Fuuka endured tragedy after their parents passed away in an accident. That’s one of the reasons why the pair share a close bond with Kanon Hiiragi, who faced a similar fate. The pink-haired, second year student has been hospitalized for an illness she picked up when traveling abroad. Once discharged, Minato and Fuuka serve a surrogate care-givers, welcoming Kanon into their home without reservation. 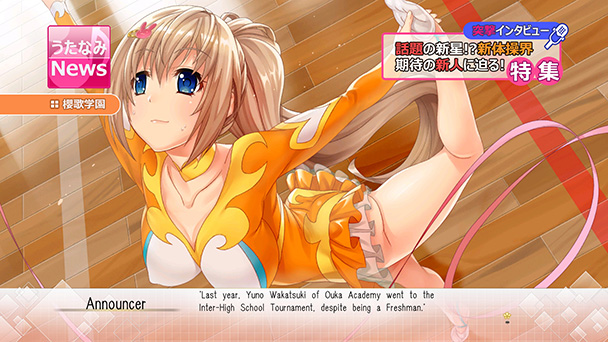 Assisting with the move, Minato notices a phone in Kanon’s luggage. But the device isn’t hers and she’s puzzled how the phone got into her belongings. While inspecting the gadget, Minato spies an unfamiliar app named “Dream 4 You”. Upon activation, the application reveals five AI-powered girls who can communicate in an intelligent, natural manner. The idol-like quintet offers to provide assistance if danger ever emerges, adding to the possibility of pending peril.

Like Muv-Luv, the game’s early hours are rooted in convention, concealing the game’s dramatic shift in tone. Exploring the familiar intersection of teenage innocence and awakening sexualities, Memories initially is pacifying, if nearly dispensable. Expectedly, you’ll gradually get to know the game’s cast of six romantic possibilities. But regrettably, the game adheres a bit too close to tradition, with characters who do little to transcend the tsundere, genki girl, and strict and serious tropes. There’s a definitive possibility that players might lose interest, before the plot changes direction. 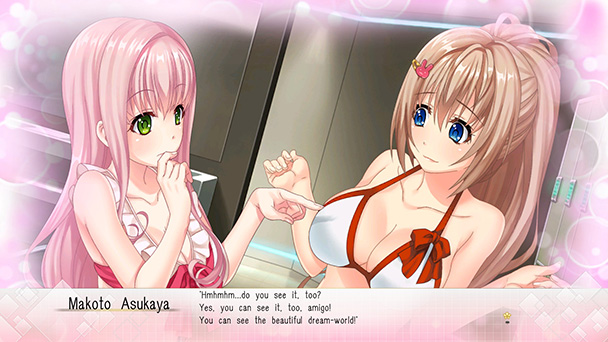 On the upside, there’s a healthy amount of fan-service and even a little bit of kink. Song of Memories never goes on too long without a chance to see one the characters in a state of undress. Even your step-sister gets into the act, straddling the protagonist and, oh so accidently, exposing her undies. Given Sony’s recent inclination for bowdlerizing content, it’s refreshing to see that the stateside release of Song of Memories only has the faintest censoring. Beyond the removal of ages and replacing the term ‘school’ with academy, this is identical to the original Japanese iteration.

After luring you into complacency and getting you to think Memories is just another romantic romp, the game pulls out the carpet beneath you. Its would be a disservice to detail what follows, but suffice to say, the title aims to trigger a range of emotions, many of them concealed in the game’s byzantine branching storytelling system. It’s obvious that developer Future Tech Lab wants to keep players off-balance, as there are quite a few tonal shifts across each story arc. 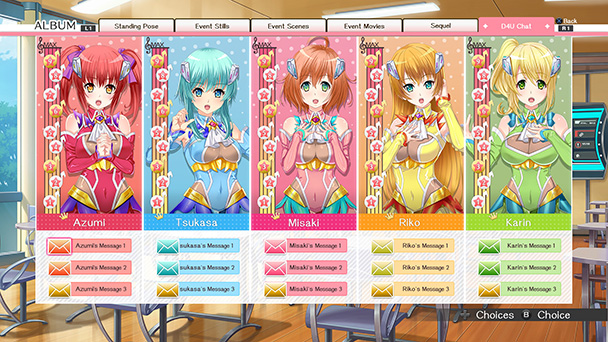 Later, Memories might surprise with the inclusion of a rhythm game to simulate combat. While it’s not quite as solid as a standalone genre entry, it’s accessible and can be bypassed by players who struggle to stay on beat. Although the battles will probably outlast attention spans, the ability to unlock new songs attempts to keep this component feeling fresh. Remarkably, the game’s voice actors do double duty, lending their vocal talents to the game’s soundtrack. With a moniker like Song of Memories, you’d expect a substantial amount of music in the game. Fortunately, that’s the case with the fifty-three song soundtrack offering a pair of opening song, six ending songs, and an healthy assortment of in-game music.

A Song of Mammaries

Visually, Song of Memories proves to be just as satisfying as it’s soundtrack. Character portraits are rendered with the E-mote, an animation system that permits cast member to display a multitude of facial expressions, movements, and postures. Unsurprisingly, the tool is used to jiggle the massive breasts of each cast member, which often sway in pendulous motions. Luckily, there’s more to the game than just eye-candy, with plenty of well-drawn backdrops that help establish the small-town setting. One possible graphical disadvantage is the size of the game’s font. Even when playing Memories on a large television, text could be difficult to read from across the room. 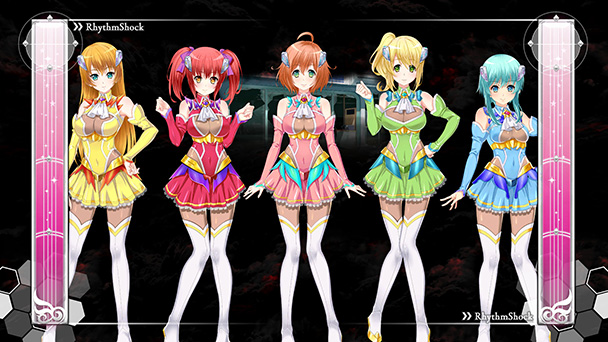 Although characters don’t challenge tradition, the game’s story structure is unlike most visual novels. Instead of moments where you’ll make a decision that will clearly influence immediate actions, Memories is much subtler. Here, decisions like who to walk to and from school with and how to spend your after-school hours guide the plotline, potentially extending bits of exposition as well influencing your game ending. While other VNs have a similar structure, Memories is far more complex, and the game only reveals some details after multiple play-throughs. Conveniently, there’s an in-game chart that displays different routes, helping your see the game’s 50+ hours of content.

With its stereotypical character formation, Memories might seem like another hackneyed harem game. But wade through the high-school melodrama, and you’ll witness the game present a procession of surprises at it attempt to produce an assortment of emotions. If you’re a fan-service aficionado or just appreciate loopy storytelling, you just might appreciate Song of Memories’ madcap rhythms. 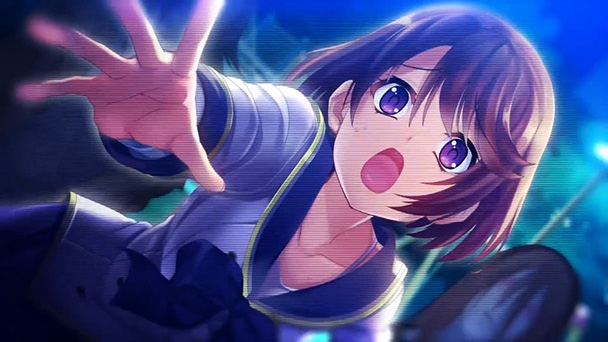 Song of Memories review
Initially, Song of Memories resembles yet another romantic harem comedy. You&rsquo;ll assume the role of Minato Kamishiro, a second-year student at the Ouka Acadamy. Reprimanded for ogling an excessively busty rhythm gymnast rehearsing after-school, Minato&rsquo;s ordinariness makes him an archetypical protagonist for a dating simulation. But when news reports detail a mysterious virus overseas, purportedly turning people violent, Memories signals that it might venture from a well-worn path. Harem Scare &lsquo;em Soon, we learn that Minato and his adopted sister Fuuka endured tragedy after their parents passed away in an accident. That&rsquo;s one of the reasons why the pair share&hellip;

Summary : With bland characters flaunting an eye-opening amount of fan-service, Song of Memories will be a contentious experience. If you’re patient and love the occasional flash of panties, there are certainly a few payoffs. But it’s recommended only after exploring more universally acclaimed visual novels like Muv-Luv.