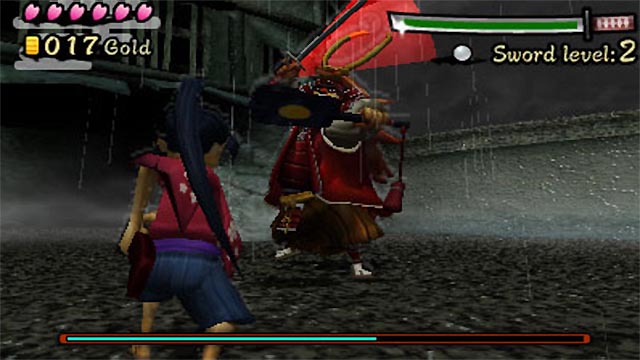 With over 200 downloadable titles, Nintendo’s DSIware service certainly delivers quantity. However, with only a handful of must-have applications, quality is a separate story. Distressingly, the online store has become swamped with halfhearted smartphone ports and simplistic original titles. Propelled by remarkable releases such as Zen Pinball 3D and Pushmo, the 3DS’s burgeoning eShop seems to be a harbinger of promise- particularly when a title as proficient as Sakura Samurai: Art of the Sword makes its way into the digitally distributed marketplace.

Best known for Project Draco, the Kinect-enabled, decidedly Panzer Dragoon-esque title headed to Xbox 360s later this year, developer Grounding Inc. hasn’t had a chance to cultivate much of a following in the U.S. Following the release of Sakura Samurai, that seems likely to change. Blending solid play mechanics, inspired visuals, and a modest $6.99 USD price, the game is more than just pleasing and thoroughly polished- it’s also an elevated benchmark for future eShop action titles. 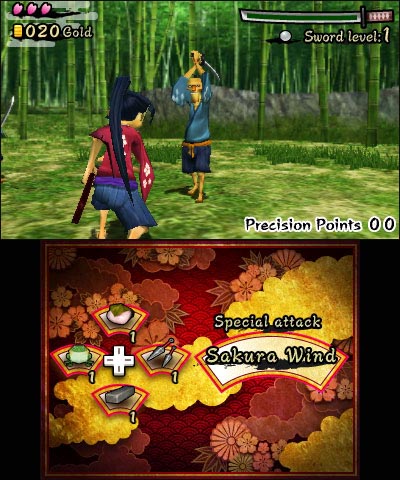 Sakura Samurai’s impetus is unabashedly skeletal, tasking players with liberating the land’s beloved guardian, Princess Cherry Blossom, from a malevolent enemy. While clichéd, the title’s cast combines cartoonish whimsy with a dash of Japanese tradition, delivering a collection of spirited personalities. Fans of Ukiyo-e will certainly appreciate the game’s introduction, which articulates an old kappa transforming a virtuous traveller into the title’s titular hero, all set against a sumptuous three-dimensional backdrop.

The game’s thirty stages are arranged via a Super Mario Bros. 3-like network, with new pathways opening once stages are overcome. Beyond the levels which pit the protagonist against venues filled with escalating quantities of swordsmen, there’s also a trio of boss encounters, as well as tranquil towns, which allows players to save, refill their heath and purchase provisions. To keep these municipalities from becoming too monotonous, there’s the sporadic NPC eager to test your skills, rewarding successful players with skill-enhancing perk. Villages also function as outposts for optimization, allowing gamers to augment their sword at the resident blacksmith’s shop. 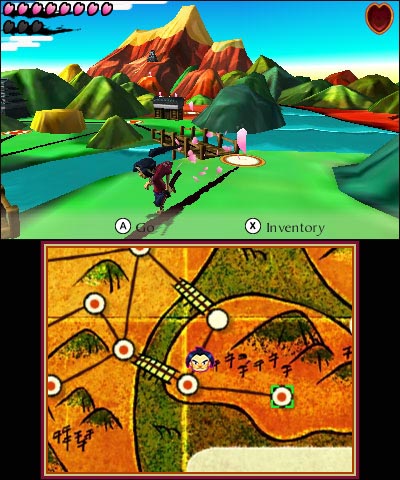 Within Sakura Samurai’s core levels, players find themselves habitually surrounded by foes. Pleasingly, the game tenders up an agreeable amount of enemies – each with different weapons and tactics. Evading the hyperactive, hack and slash mentality of many blade-based titles, Art of the Sword truly lives up to its moniker, requiring players to carefully monitor their opponents. Once an adversary is about to strike, players sidestep out of harms ways, then meticulously strike with lethal precision. Cleverly, a few elements prohibit the title from becoming a tedious ‘Simon-says’ time-waster. First, combat is complemented by a bit of resource management, requiring players to be mindful of their health and the sharpness of their blade, as well as when to unleash opponent quelling measures like shuriken and distracting frogs. More importantly, enemies are endowed with a bit of cunning, and are able to feign inattentive players. Arguably, the title’s most compelling mechanic is precision points- a system that rewards players with dividends for fastidious evasion.

Elegantly, Sakura Samurai avoid garish 3d effects, instead offering a gentle sense of perspective across each battlefield. However, that doesn’t mean the title isn’t visually impressive. From well-drawn and animated character models, the exquisite flutter of falling cherry blossoms, and the sporadic eye-catcher like the pattern of rain cascading down a castle wall, the game is graphically gratifying. Likewise, the game’s soundtrack incorporates signature Japanese instruments such as the taiko drum and shakuhachi, which complement the action flawlessly. 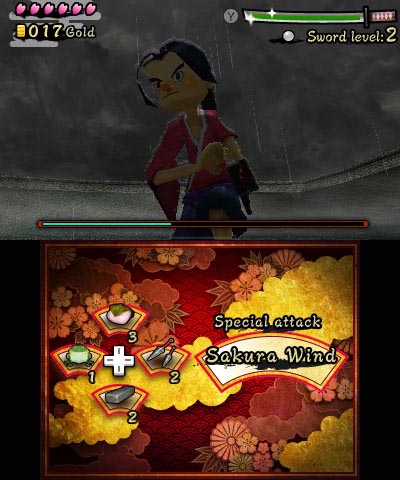 Although Art of the Sword can be vanquished by resolute gamers in about five hours, the title does offer a nice set of superfluities. A hard mode reduces the player’s health and raises the formidability of foes, for those looking for a supreme challenge. Players can also unlock Thug Challenges which defies the defeat of 30, 50, or 100 foes as quickly as possible. Lastly, the Rock Garden uses the 3DS pedometer to permeate a landscape full of barren tree with hundreds of cherry blossom petals.

The most puzzling part of Sakura Samurai: Art of the Sword is why Nintendo hasn’t pushed the title more. With vibrant visuals, a satisfying score and an immersive adaptation of sword fighting, the game is recommended to all 3DS owners. After years of stepping into the geta of frantic bladesmen, it’s refreshing to experience a title that channels the methodical tempo of battle, while remaining insistently enjoyable.

2012-02-15
Robert Allen
Previous: Kimi ni todoke: From Me to You – Season One Review
Next: Tekken 3D Prime Edition Review